19 September 2015
13
The tank builders were named as heroes by chance, because they had made a truly titanic labor feat. Thus, during the war, the Soviet tankoprom produced 95 252 units of armored vehicles, while the German industry produced only 21 625 units.

Laureate of two State Prizes for outstanding inventions and improvement of industrial production technologies. Since 1941, he worked as the chief designer of the factory number 38 in Kirov. Under the leadership of Schukin, a light self-propelled artillery mount SU-76 was designed, as well as a cast tower tank T-60. It is interesting that the fascists preferred to take as trophies the T-60, which they called the "indestructible locust", and part of the trophy T-60 was transferred to Romania, where their chassis were used to create TACAM self-propelled guns.

From 1941 and up to 1950, he worked as chief designer for self-propelled artillery at Uralmash plant. He oversaw the creation of 13 types of combat vehicles, of which four - SU-122, SU-85, SU-85M and SU-100 - were adopted by the Soviet Army. I must say that SU-85 is the first SPG that could fight on equal terms with German tanks. From a distance of more than a kilometer the crew of the SU-85 could disable any enemy tank, for example, the “panther” easily penetrated into the mask of the gun with sabot projectiles. SAU also preserved the maneuverability and speed of its close “relative” T-34, and this mobility saved the crews of the SU-85 many times. And SU-100 and later 70 years is still in service or in storage in a good ten countries of the world, once again proving its simplicity and reliability.

From 1943 to 1958, he was the chief designer of Artillery Plant No. 9 and head of the OKB-9, and then became the chief designer of the OKB-9 Uralmashzavod. During the war years, under his leadership, developed 50 projects of guns and howitzers. Design Bureau Fyodor Petrov, despite its small size, has developed eight adopted artillery systems, including the 152-mm howitzer D-1, 85-, 100- and 122-mm guns for self-propelled guns,
X-NUMX mm D-85 gun for T-5 tanks.

At the end of 1942, he, together with the tank designer Joseph Kotin, created the SU-122 self-propelled artillery installation. In 1943, he developed a 152-mm howitzer, then powerful 85-, 100- and 122-millimeter cannons to re-equip the Joseph Stalin and T-34 tanks. Petrov also became one of the creators of combat tactical missiles. He was the chief designer of the Onega rocket created in 1958 with a powder engine. The rocket contained many technical innovations, in particular, an original control system that used digital technology for the first time in the world.

One of the founders of the legendary thirty-three spent the war years in Nizhny Tagil, where he served as chief designer for tank design at the Ural tank factory. He participated in the design of the BT-2, BT-5, BT-7, A-20, A-32 tanks. After T-34, under his leadership, T-54, T-64 and their modifications were also created.

The most massive tank T-34 had a huge impact on the outcome of the war and on the further development of world tank construction. He still remains the most famous Soviet tank and the undisputed symbol of the Great Patriotic War. Norman Davis, a professor at Oxford University, believes that the merits of the T-34 are not in its mass or power, but in efficiency. “The maneuverable Soviet T-34" hunted in packs "like wolves, which did not give chances to the cumbersome German" tigers ", - he wrote.

In 1943, he became the head and chief designer of the experimental plant No. XXUMX, while remaining Deputy Commissar of the Tankoprom. Headed the creation of heavy tanks KV-100, KV-2, KV-1, KV-85, EC-8, EC-1. Kotin is one of the creators of the famous heavy tank EC-2 with the X-NUMX-millimeter cannon D-2T. In the period of 122-25, under the leadership of Kotin, self-propelled artillery mounts SU-1943, ISU-1944, and ISU-1 were created on the basis of KV-152С and IS tanks. During the war years, the CTZ produced 152 thousands of tanks and self-propelled guns. EC-122 was the most powerful Soviet tank that participated in the Great Patriotic War.

From 1940, he was deputy chief designer in the tank SKB-3 ChTZ. During the war he became a senior engineer for new tanks, as well as deputy chief designer of the Kirov factory in Chelyabinsk. Participated in the development and launch in the production of all types of tanks and self-propelled artillery installations. Balgi became the author of the idea and constructive design of the "Pike" - the heavy tank EC-3, which got its nickname for the characteristic shape of the upper front part of the hull. He was put into production in the last days of the war and therefore did not have time to make war. However, it was these 52 combat vehicles of 7 units of September 1945 of the year that took part in the Berlin parade of Allied troops in honor of the Victory in the Second World War as part of the Soviet Army, where they made a strong impression on the USSR anti-Hitler coalition western allies. 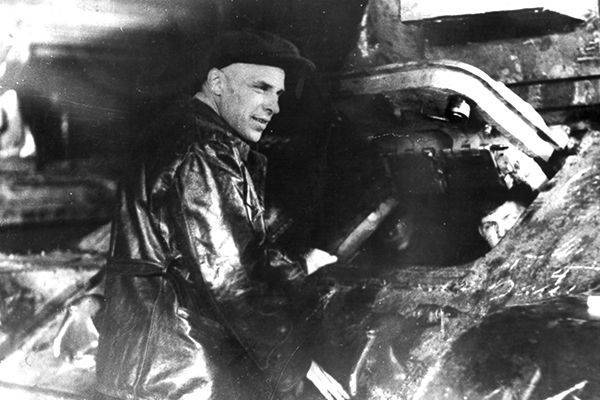