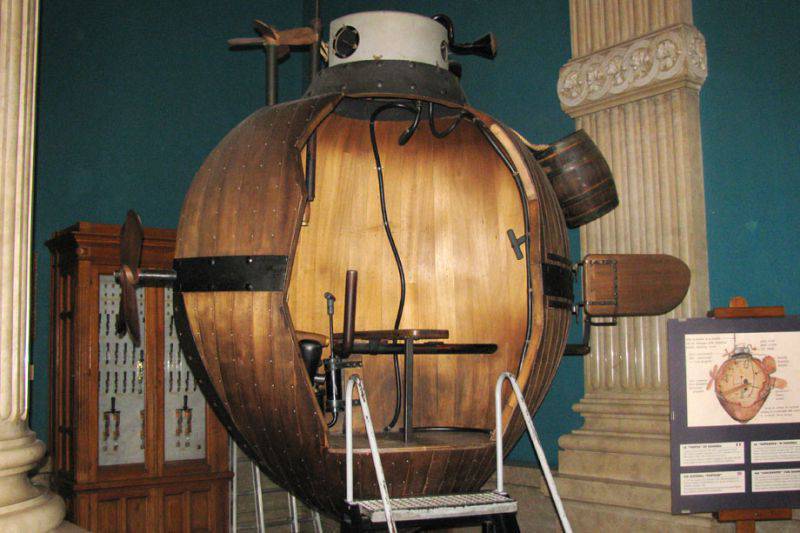 According to the currently accepted version of the naval stories, on the night of 6 on 7 September of 1776, the world's first submarine attack of a surface combat ship took place. Courageous submariner, Sergeant of the rebel army in Washington, Ezra Lee, in a small single submarine called "Turtle" (Turtle), developed and built by Connecticut teacher David Bashnellom, attacked the British 64-cannon battleship "Eagle" in New York Bay.
Coming close to the bottom of the battleship, Lee began to drill it with a hand gimlet to fix a blasting charge with a clockwork, but the copper plating of the bottom did not allow it. While Lee was engaged in drilling, the British sailors noticed him and lowered the boat to see what kind of strange thing loomed at the side. Not wanting to be in captivity, Ezra took off running, but the boat was going faster and almost overtook him when he, to divert attention, unhooked a subversive charge with a cocked timer. A few seconds later a powerful explosion was heard in front of the boat, which frightened the British so much that they immediately turned back.
A month later, the Americans decided to repeat the attack, but the British sank the rowing barge, on which the "Turtle" was transported to the area of ​​attack. After that, Bashnell, who had lived 48 for years, for some reason completely forgot about the submarines and no longer tried to build them.

This story, replicated in hundreds of books, articles and Internet sites, is perceived by many as something obvious and well-known. However, if you think about it a little, it raises a lot of questions. First, the earliest descriptions and images of the "Turtle" appeared only in the second half of the XIX century, that is, approximately 100 years after it was supposedly built and sent into battle. Moreover, these images and descriptions are so contradictory that it becomes immediately clear - they made them clearly "from the bald." In some of the figures, the Turtle is driven by oars, in others by screws of various shapes, while in some cases the screw is rotated by pedals and in others by a manual collar. Also the shape of the hull, steering wheel, etc. varies widely.
No descriptions, drawings or drawings of the submarine, made by Bashnell or his contemporaries, do not exist. Also, there are no documents of the XVIII century with references to its construction. This alone would be enough to doubt the veracity of the story of the first American submarine, but there is another weighty counter-argument. Attack "Needle" and the events following it with a pursuit and explosion are not reflected in any way in the documentation of this battleship and other ships of the English squadron. Judging by their logbooks, neither 7 of September, nor in the previous and next days and nights anything like this happened in the New York Bay.
All this has led the modern English maritime historian Richard Compton-Hall to conclude that Bashnell's Turtle is just one of the many historical hoaxes that the nineteenth century was rich in. Thus, it must be delivered at one time with the Artamonov bicycle, the Blinov steam tractor, and the clerk Kryakutny's balloon.

Modern replicas of the submarine Bashnella stand in many American museums, but among their authors there is still no consensus on how this legendary device should have looked.

One of the earliest drawings "Turtle", in which she is depicted with oars.

And this is a slightly later drawing, already with screws. Please note that the author dressed Ezra Lee in a suit that came into use only in the middle of the XIX century. 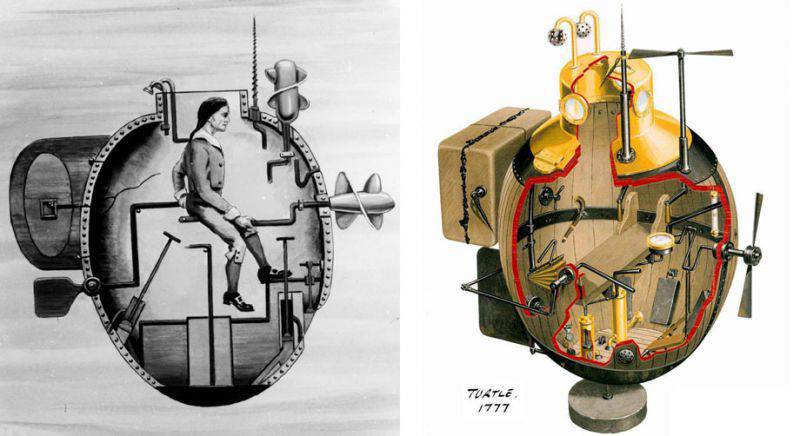 Two more later versions, already the twentieth century, the left one is clearly based on the top figure, and the right one is completely incomprehensible on what. Its author, for some reason, dated "Tortoise" 1777 year. 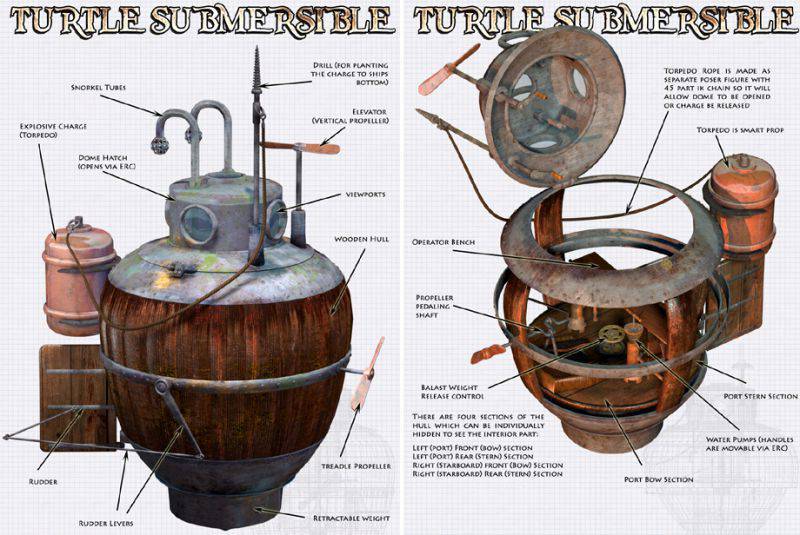 Finally, modern computer fantasy, which, in my opinion, looks the most attractive.

Ctrl Enter
Noticed oshЫbku Highlight text and press. Ctrl + Enter
We are
Scharnhorst. Creation, battles, trips and death of the German battleshipCrime and Punishment. French battleship "Jean Bar"
12 comments
Information
Dear reader, to leave comments on the publication, you must to register.