Weapons and Armor of Ancient Egypt


Looking through the archive of their publications by stories armor and weapons issued in VO, found that among them there is no one on the history of weapons of ancient Egypt. But this is the cradle of European culture, which gave humanity a lot. As for the periodization of its history, it is traditionally divided into the Old Kingdom (XXXII century - XXIV century BC), the Middle Kingdom (XXI century - XVIII century BC), and the New Kingdom (XVII century - XI century BC.) Before the Ancient Kingdom in Egypt, there was a pre-dynastic period and then the Early Kingdom. After the New Kingdom there was also a Late period, and then the Hellenistic period, and between the Ancient, Middle and New kingdoms, as a rule, there were also transitional periods filled with distemper and revolts. Often at this time Egypt was attacked by nomadic tribes and warlike neighbors, so its peaceful history was by no means a military affair in Egypt, and therefore offensive and defensive weapons were always held in high esteem!

Already in the era of the Old Kingdom - the era of the kings of the pyramids in Egypt, there was an army recruited from free peasants, some detachments of which were armed with uniform weapons. That is, the army consisted of warriors with spears and shields, warriors with maces, small hatchets and daggers made of copper and bronze, and detachments of archers with large bows, the arrows of which had tips of flint. The task of the troops was to protect the borders and trade routes from the attacks of Libyans - the most significant among the tribes of the Nine Bows - the traditional enemies of ancient Egypt, the Nubians in the south and the nomadic Bedouins in the East. During the reign of Pharaoh Snofru, the king’s army captured 70000 prisoners, which indirectly indicates the number of Egyptian troops, the perfection of their tactics, and - their superiority in armament!

Since in Egypt it was very hot some special "military uniform" or protective clothing the ancient warriors did not have. All of their clothing consisted of a traditional skirt, a fleece wig, which played the role of a helmet that protects the head from the deafening blow of the mace and the shield. The latter was made of bull skin with wool outward, which, apparently, was combined in several layers and stretched on a wooden frame. The shields were large, covering the person to the neck and pointed at the top, and also slightly smaller, rounded at the top, which the warriors held behind the straps attached to the back.

The warriors were built in the phalanx and moved on the enemy, hiding behind shields and putting spears, and the archers were behind the infantry and shot through their heads. Similar tactics and roughly the same weapons among the peoples with whom the Egyptians fought at that time did not require any greater weaponry perfection - more disciplined and trained warriors won and it was clear that they were, of course, Egyptians.

At the end of the Middle Kingdom, the Egyptian infantry, as before, was traditionally subdivided into archers, warriors with short-range strike weapons (clubs, clubs, axes, axes, darts, spears) who did not have shields, warriors with axes and shields, and spearmen. This “branch of the armed forces” had shields of length 60-80 cm and width around 40-50 cm, as, for example, in the figures of soldiers found in the tomb of Nomarh Mesekhti. That is, in the era of the Middle Kingdom, the Egyptians knew a deep structure of spearmen, hiding behind shields and built in several rows!

Interestingly, the troops of the Egyptians at that time consisted solely of infantry. The first use of horses in Egypt was witnessed during the excavations of the city of Buchen, a fortress on the border with Nubia. The find dates back to the Middle Kingdom, but although the horses at that time were already known, they did not have wide distribution in Egypt. It can be assumed that a certain wealthy Egyptian acquired it somewhere in the East and brought it to Nubia, but it is unlikely that it was used as a means.

As for the archers, they were armed with the simplest bows, that is, made of a single piece of wood. A complex bow (that is, assembled from different wood species and pasted over with leather) would be too complicated for them to make, and even expensive to supply with such weapons to ordinary foot soldiers. But do not think that these bows were weak, because they had the length of 1,5 m, and more, and in skillful hands were a very powerful and long-range weapon. English bows of the Middle Ages from yew or maple, and from 1,5 to 2 m in length, were also simple, but they pierced steel armor at a distance of 100 and the English archer despised anyone who couldn’t release 10 - 12 arrows in a minute. True, there is one subtlety. They didn’t shoot straight at their patrons, or only fired at very close distances: almost point blank! At a long distance they shot up with volleys at the command, so that the arrow fell on the knight from above and struck not so much himself as his horse. From here and armor on a neck at knight's horses from above! So, the capabilities of the Egyptian archers armed with bows of this size cannot be doubted, and they could easily hit opponents, not protected by metal armor, at a distance of 75 - 100 m and up to 150 m under favorable conditions.

Ancient Egypt: weapons and armor of warriors on chariots

During its thousand-year history, Egypt has experienced not only ups and downs. So the era of the Middle Kingdom ended with the invasion of the nomadic Hyksos, its defeat and a period of decline. The fact that they fought on two-wheeled high-speed chariots harnessed by a pair of horses helped them to cope with the Egyptians, which gave their troops unprecedented maneuverability and mobility. But soon the Egyptians themselves learned to breed and train horses, make chariots and fight them. The Hyksos were expelled, Egypt experienced a new rise, and its pharaohs, no longer content to defend their borders and expeditions for gold in Nubia, started wars with their neighbors in Asia, and also tried to penetrate the territory of modern Syria and Lebanon.
Especially the warlike pharaohs of the New Age of the New Kingdom were representatives of the Ramses dynasty. Armament of warriors at this time became even more deadly, as the technology of metal processing was improved, and in addition to the chariots, the Egyptians also learned a reinforced bow, which increased the range of the boom and the accuracy of its hit. The power of such bows was truly great: it is known that such pharaohs as Thutmose III and Amenhotep II shot through them with arrows and pierced through copper targets.

Already at a distance of 50 - 100 m with an arrow with a metal leaf-shaped tip, apparently, it was possible to pierce the shell of a warrior on the enemy's chariot. The bows were kept in special cases on the sides of the chariots - one on each (one spare) or one on the side closest to which the shooter stood. However, it has become much more difficult to use them now, especially when standing on the chariot and also on the move.

That is why the military organization of the Egyptian army at that time also underwent major changes. In addition to the traditional infantry - "mesh" appeared chariotry - "netheter." They now represented the elite of the army, all their life they were learning military craft, which for them became hereditary and passed from father to son.

The very first wars in Asia brought rich booty to the Egyptians. So, after the capture of the city of Megiddo, they got: «340 prisoners, 2041 horse, 191 foal, 6 breeding horses, 2 chariots decorated with gold, 922 ordinary chariots, 1 armor of bronze, 200 leather shells, 502 combat archery, 7 tent silver-trimmed pillars belonging to the king of Kadesh, 1929 cattle heads, 2000 goats, 20 500 sheep and 207 300 sacks of flour. ” The vanquished recognized the authority of the ruler of Egypt over themselves, swore an oath of loyalty and pledged to pay tribute.

Interestingly, there is only one bronze and 200 leather in the list of captured shells, which suggests that the presence of chariots required the increased protection of those who fought on them, because they were very valuable professional soldiers who were sorry to lose. But the fact that there is only one metal shell testifies to the exceptionally high cost of the then defensive armament, which only the princes and pharaohs of Egypt possessed.

Many chariots taken as trophies clearly indicate their wide distribution, not only among Asians, but also among the Egyptians themselves. The Egyptian chariots, judging by the images and artifacts that have come down to us, are light carts for two people, one of which ruled with horses and the other fired at the enemy with a bow. The wheels had wooden rims and six spokes, the bottom was woven, with the minimum of wooden fences. This allowed them to develop greater speed, and the stock of arrows in two quivers allowed them to conduct a long battle.

In the battle of Kadesh - the largest battle between the armies of Egypt and the Hittite kingdom in 1274 BC. - Thousands of chariots took part on both sides, and although it ended in virtually a draw, there is no doubt that chariots played a very important role in it. But besides the new bows, the Egyptians had two new types of long daggers - with a massive leaf-shaped blade with an edge in the middle, and a blade rounded off at the end and piercing-slashing - with elegant, long blades with parallel blades, which smoothly passed into the tip, and also with a convex edge. The handle of both was very comfortable, with two conical sockets - up - top and down - crosshair.

Sickle-shaped (sometimes double-edged) bladed weapons borrowed by the Egyptians from their enemies in Palestine and undergone a number of modifications in Egypt, the khopesh (hepesh), were also widely used, like maces, axes with a narrow blade and moon-shaped axes. 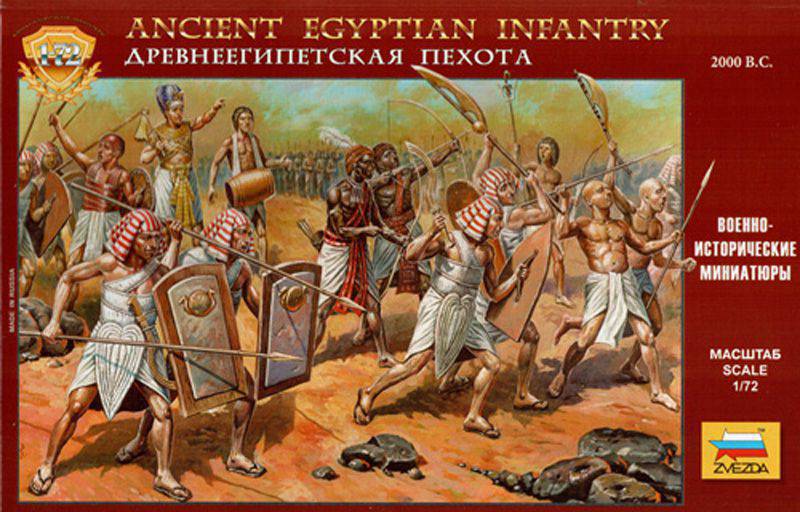 This is how the infantry of ancient Egypt, including the Ancient and Middle kingdoms, could look like. In the foreground are two warrior-spears in headscarves, with padded protective aprons in the shape of a heart over an ordinary apron, perhaps in quilted jackets, with crescent-shaped short swords made of bronze, and then warriors with a battle mate, combined with an ax and with a pole ax with a uniform blade. A dart thrower has no defense weapon at all. Two black warriors with bows in their hands - mercenaries from Nubia. Only one pharaoh has armor on his body, next to which stands a signalman with a drum. A box of a set of soldiers of the company "Star". Oh, what is only now for the boys there! And what kind of soldiers I had in my childhood - heaven and earth! 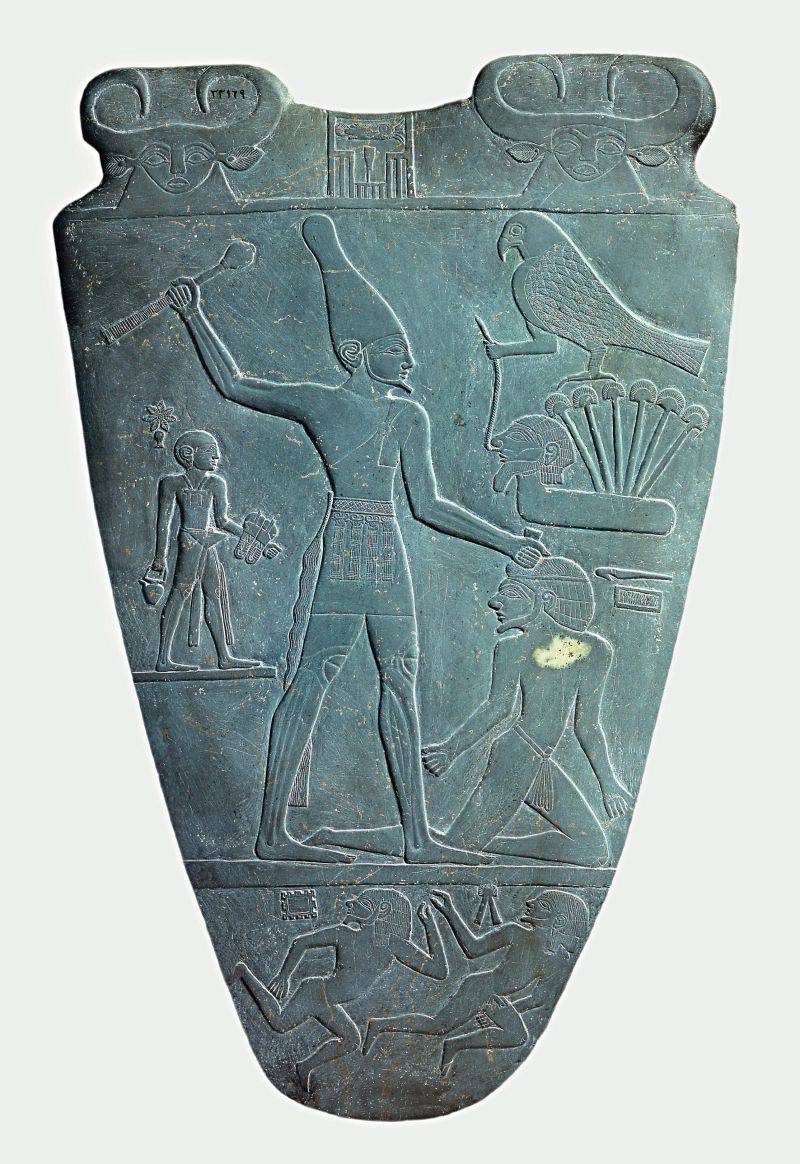 Palette Narmera. Depicts Pharaoh Narmer with a mace in his hands. (Cairo Museum) 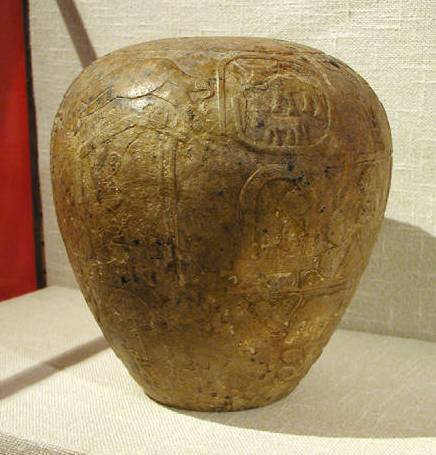 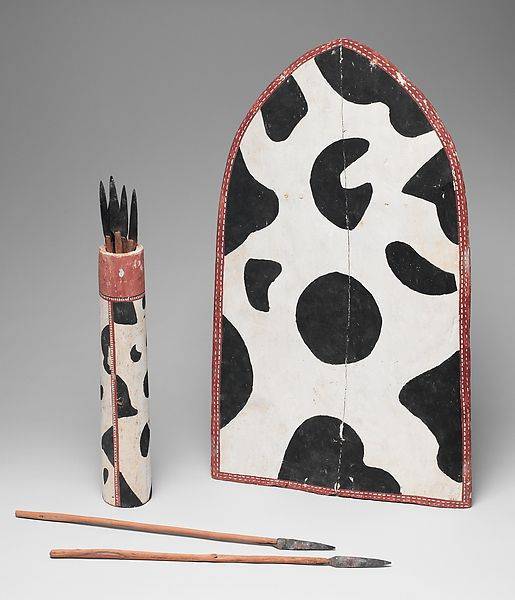 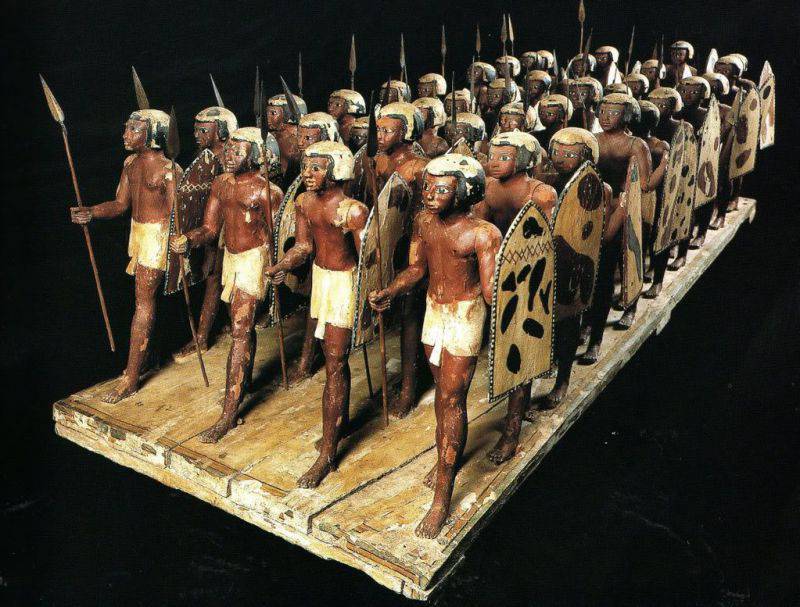 The painted figures of warriors from the tomb of the Nomarch Mesehti. (Cairo Museum) 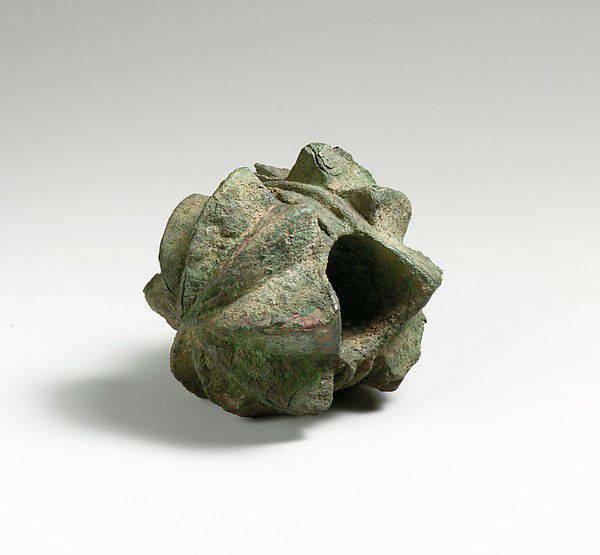 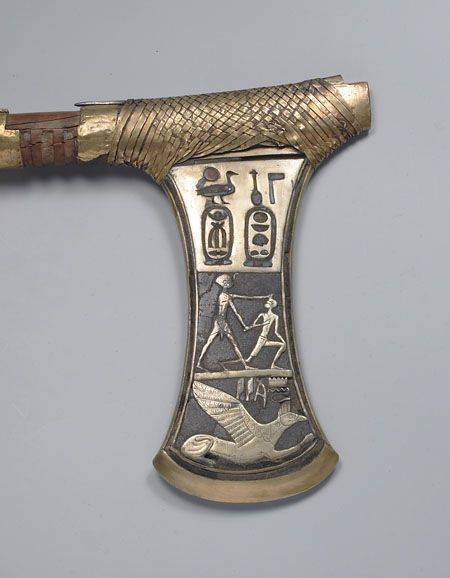 The ax of their tomb Ahhotep. New kingdom. 18-I dynasty, XVI century. BC. (Egyptian Museum, Cairo) 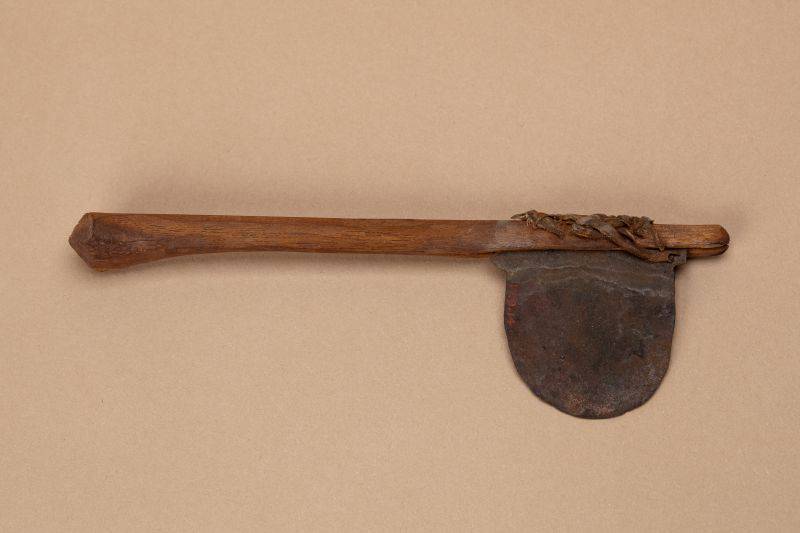 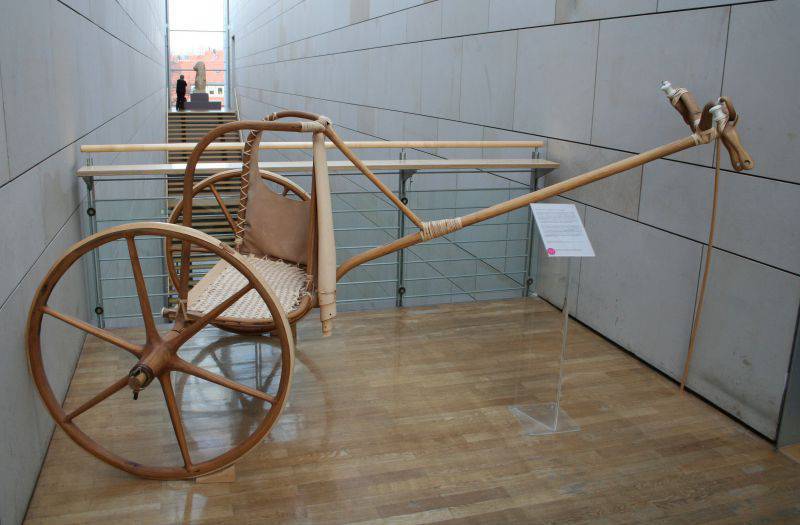 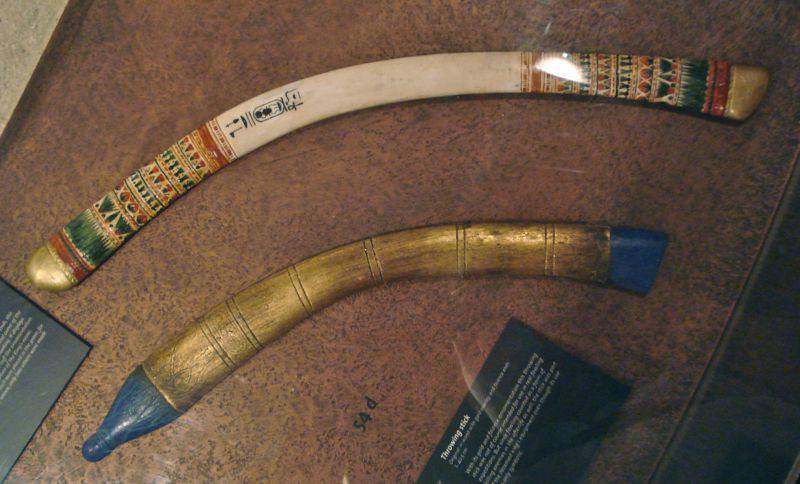 Surprisingly, the ancient Egyptians knew and used boomerangs very similar to those that were used and consumed by the indigenous people of Australia. So these two boomerangs from the tomb of Pharaoh Tutankhamen are very similar to the Australian ones and differ from them except in their decoration! (Egyptian Museum, Cairo) 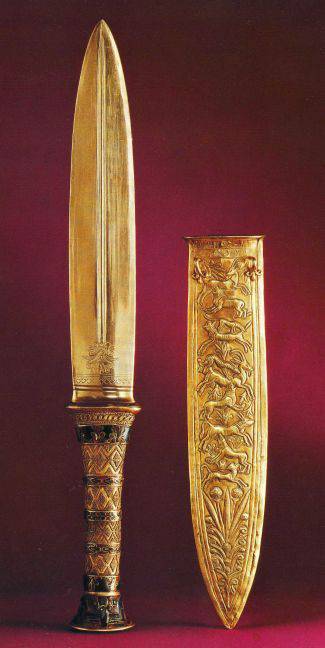 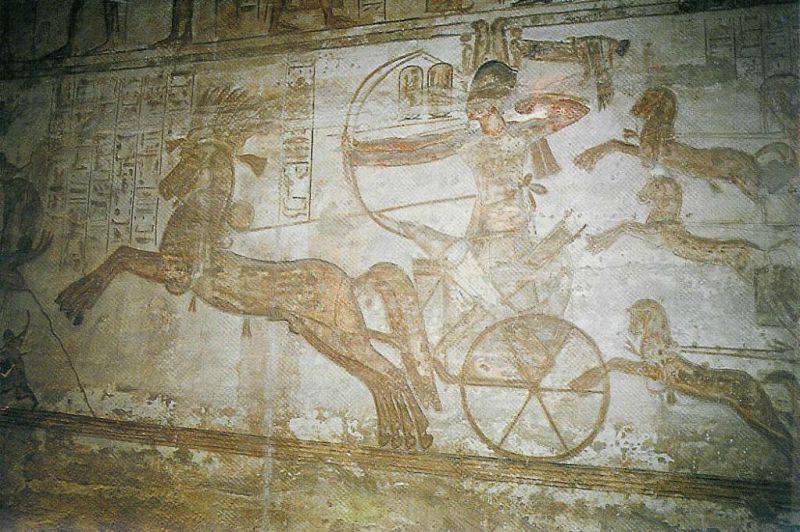 Pharaoh on the chariot. Wall painting in the temple of Abu Simbel. 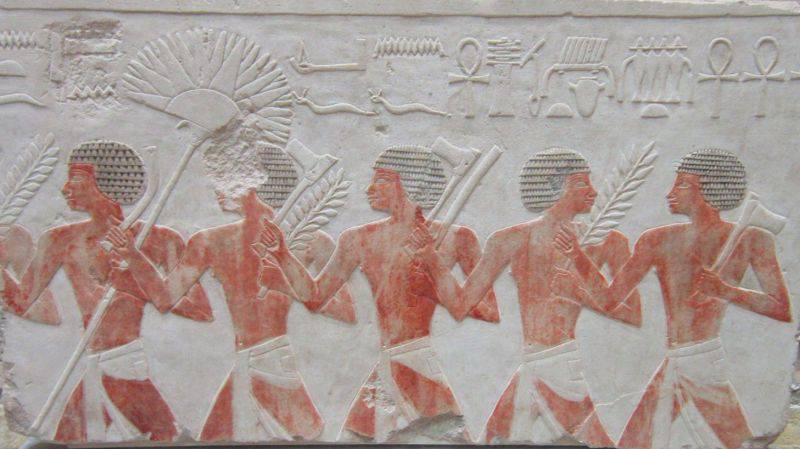 Ctrl Enter
Noticed oshЫbku Highlight text and press. Ctrl + Enter
We are
“White” and “colored” armor ... (part one)The development of armor in the Middle Ages in Western Europe
129 comments
Information
Dear reader, to leave comments on the publication, you must to register.