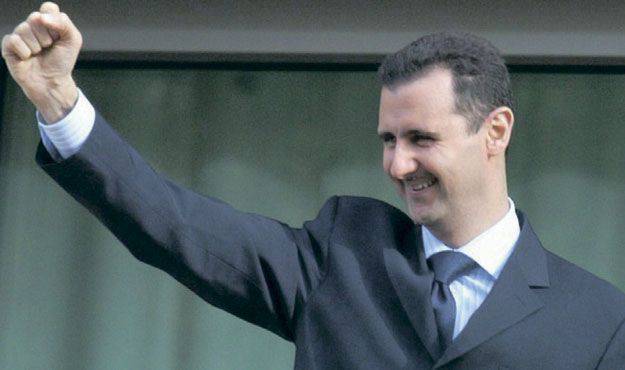 50 years ago, 11 September 1965, was born the president and supreme commander of the armed forces of Syria, Bashar al-Assad. A man who just a few years ago was an ordinary politician from the Middle East and quite “handshaking” for Western countries as a state leader. However, the war in Syria radically changed its image. By not allowing him to make a sacrifice of himself, Bashar Asad became one of the popular leaders who opposed the aggression of the Western world, the Arab monarchies, Turkey, created with their support of diverse gangs and the Islamic State.


As part of the "reset" of the Middle East (and the entire world community), the Western masters sentenced Syria to dismemberment and wanted to turn it into a springboard for the further attack of the "army of chaos" on the planet. However, an easy walk in Syria did not work. Unlike Muammar Gaddafi, Assad was able to maintain the solidity of most of the Syrian elite and the loyalty of the armed forces. Syria has fiercely resisted the interventionists who provoked and supported the war in the country. With the support of Iran and Russia, Syria has for several years opposed the enemy coalition. A huge role in such a war has the identity of the head of state. Assad did not run away, did not capitulate, did not show "flexibility." This causes respect.

At present, Syria is threatened by splitting into several states: a part of the territory is under the control of government forces, its territories are in the “Islamic state”, in various gangs, including Islamists who are not subordinate to the IG, and in the Kurds. The United States, Britain, France, Israel, Turkey, and the Arab monarchies have their interests in Syria. Iran and Russia support the legitimate authority of Assad.

The backstage structures that control Western civilization have a certain interest in Syria. Along with Egypt, Syria is a key country in the Middle East. It has great symbolic meaning, historical and strategic importance. Symbolically, the fall of Syria will be an important stage for the start of the “last battle” (Armageddon). Historically, Syria is one of the cradles of mankind. It is not for nothing that during the wars and conflicts in the Middle East, certain forces attach great importance to eliminating traces of the true history of mankind. After all, history (chronology) allows you to control the masses over a long period of time, programming entire nations for centuries to come. Strategically, Syria is located on important communications, including the transfer of energy resources. Its territory is an important springboard from which it is possible to exert influence on the Eastern Mediterranean, Turkey, Iran, Iraq and Israel.

So, Washington, Syria is interesting as a territory from which the wave of chaos can be spread further, and as a springboard for countering Iran. In the framework of the anti-Iranian strategy, Syria is also interesting for Israel. All the talk of Western politicians and the press about the “dictator” Bashar Assad, about the need for “democratic transformations in the country”, etc., is a common information noise, a snag. In fact, there is a big game, and it continues a century after the century.

After the blitzkrieg failed, the anti-Syrian coalition led a “war of attrition”. And she led to success. The country lies in ruins. IG bombing, in fact, is aimed at the destruction of the country's infrastructure. They legalized the appearance of aviation USA and other countries in the airspace of Syria. In fact, the “Islamic State” was able to gain a foothold in Syria only because Syria was already destroyed and exhausted by the struggle with other gangs that are supported by the West, Turkey and the Arab monarchies. The anti-Syrian coalition essentially cleared the way for the Caliphate.

Syrian government forces are not able to act actively in all directions and are exhausted by the protracted war. Human reserves are coming to an end, and their opponents have much more. After all, people can be recruited already in several destroyed and half-destroyed countries, where there is no prospect other than the opportunity to become a fighter or try your luck as a refugee, migrant. Only in the IG on the territory of Syria every month several thousand militants join in, who are trained in Turkey and the Arab monarchies. For Damascus, the time has come for a strategic retreat, preserving only the most important territories and objects. Under the cover of the United States, Turkey and other countries hostile to Syria, “free zones” are being created, which in the future may become the basis for new “democratic” state entities. These formations will become fragments of the “new world” - the neo-slaveholding and neo-feudal New World Order.

In addition, Syria is interesting in that transit pipelines pass through its territory. Through Syria, oil pipelines from Iraq and the Arabian Peninsula go to the Mediterranean ports of Turkey, Lebanon and Syria itself. The West is interested in the strategic capabilities of the Syrian pipeline and port systems for the delivery of hydrocarbons from Iraq and the Arabian Peninsula to Turkey and Europe. You must also remember about the gas fields that are found in the Mediterranean Sea off the coast of Syria.

Thus, the battle for Syria is one of the key battles of the Middle East front of the outbreak of world war. Syria is of key importance both for the instigators of the war - the Anglo-Saxons, the transnational forces building the neo-slave New World Order, their Arab and Muslim clients, such as Saudi Arabia and the Islamic State, and for Iran and Russia, which were included in camp of the victims. " The more Bashar Asad will last, the more time Iran, Russia and China will have for internal restructuring and mobilization.

Therefore, you should not go on about the West and agree to the resignation of Assad and replace him with another figure "for the sake of reconciliation." With all its pros and cons, President Bashar Asad is now of great ideological and historical importance as a man opposing a huge coalition leading an unjust war. If the West pushes his resignation, he will want to continue - to remove Iran’s Supreme Ayatollah and Russian President V. Putin. It’s not for nothing that the Western media have been building the “axis of evil” for years, blaming Syria, Iran and Russia for all sins. White is made black, although it is the United States, Britain and France that are guilty of inciting all the recent wars and conflicts on the planet.

We are in Yandex Zen
Judgment in Tripoli. Saif al-Islam Gaddafi sentenced to death
Libya: after Gaddafi
325 comments
Information
Dear reader, to leave comments on the publication, you must to register.