How Ivan Tinkov pretended to be a bear

11 September 2015
10
Unfortunately, I do not have a photo of the person about whom I will tell. I learned about it from his great-granddaughter, Karina Neznamova's little girl. I saw with my own eyes the letter that will be discussed here. I saw it, but I didn’t figure it out, so forgive me. 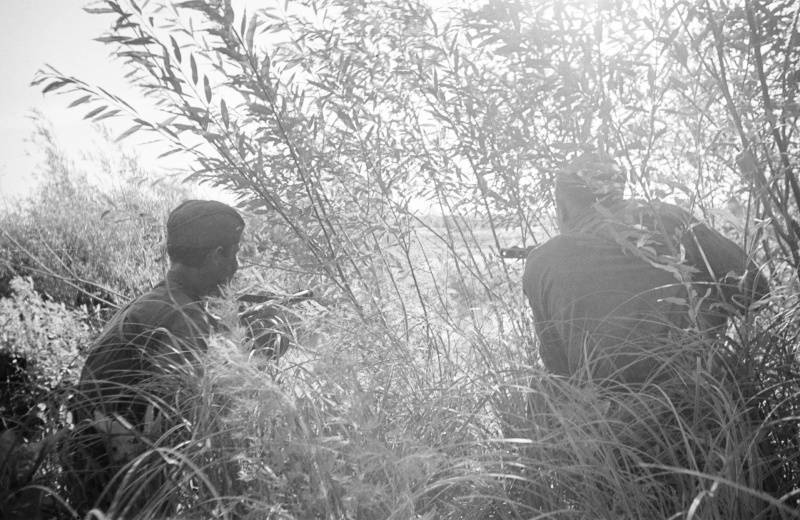 So, Ivan Fedorovich Tinkov was born and lived in the village of Makhonovo, Dobrovsky district. The guy was very funny. Even going to the front in June, 1941, he tried to dispel the general oppressive mood and sang the ditties, which he composed on the go. All around were crying, seeing off their relatives to the war, and Ivan, then a twenty-year-old boy, joked:
- Do not worry, madame and grandmothers! We're going for trophies!

He was a desperate smoker. True, the habit was carefully concealed from his mother: she was very strict. Therefore, having smoked, Ivan always chewed a bay leaf.

On that day, going to the front, Tinkov poured in the stored tobacco in several rags, and rolled them up and hid them in his boots.

Before the first battle, their platoon crossed the marsh, many soldiers wet their feet and caught a cold. And Ivan managed not to let the water in his boots, and cure others of the common cold by putting tobacco in footcloths to the soldiers. After this incident, he was called the Tobacco Footcloth.

In general, Ivan did not know how to handle footcloths. Either it was inconvenient for him to wind them up on his feet as the commander showed, or he simply did not remember, and then he was ashamed to admit it was unknown. But the legs of the fighter Tinkov were always in terrible calluses. Therefore, barely stood out a minute, he took off his boots and walked barefoot. For this, the commander often scolded him, even punished him. Until that is what happened ...

It was late autumn, when the first snow fell. The part where Tinkov served was fighting near Zelenograd and had to relocate. The fighters spent the whole night and half a day walking in the woods to the designated place. Very tired. Places unfamiliar, it is necessary to scout if there is any ahead of the enemy.

On the mission went Ivan and another young fighter, who was called Crane for his tall stature.
Some soldiers passed - no one. And the silence around is so dead that friends rashly decided that they would hear the Germans for half a kilometer.

We sat down on some kind of log and Ivan, as usual, even for a moment and took off his boots. Suddenly they hear: like noise. Lay down on the ground, hid. For sure! Quite not far from them are four Germans. Automatic across the line and their eyes on the ground fumble. They speak and repeat the same word with each other: “reh”.

- Yes it is they stumbled upon traces of roe! - guessed Crane. - It can be seen, they decided to track it down. The snow fell, traces fresh. Probably, these Fritzes were engaged in hunting in peacetime. It would be nice to take them prisoner, but how? We need to come up with something unexpected.
“You go to ours,” Ivan commanded, “warn you that I will bring the fascists soon.” Let go out to meet. And I will deliver them to you warm.
- How?
- That is none of your business. Go, just take my boots.

Crane left without understanding anything. And Ivan picked up a twig from the ground and sneaked, went barefoot for the Nazis. Carefully overtook them, crossed the path so that the traces could be seen, he trampled a little and went to ours. A sprig of this, he constantly drove through the snow to footprints were not very distinct.

Human footprints look like bearish, every hunter knows. No wonder the clubfoot is often called the bare man. But it is unlikely that the Germans saw real bearish prints, Ivan reasoned. Most likely, they read the books even now, without understanding the twilight, but already inflamed with the desire to catch the roe, they will certainly decide to grab the clubfoot. Who would think that this is being lured away from whence by the barefooted Red Army fighter?

So it happened. The Nazis set about trying to shoot the Russian bear. And "warm" went straight to our fighters.

True, Ivan that day caught pneumonia and was treated in a hospital. He told there this historybut he was not really trusted. And offended by such an attitude, Ivan Fedorovich wrote a letter to his unit, Crane. And he sent a response in which he confirmed that Ivan Tinkov captured four Germans with his extraordinary wit.

But here, too, Tabachny footwoman was unlucky: this letter arrived at the hospital too late: everyone who did not believe was already discharged. And then Ivan began to carry it with him, in case someone else would laugh at him.

Tinkov went through the war and met the victory in Berlin. And instead of the promised trophies, he brought home a letter. He is now kept by relatives of Ivan Fedorovich.

Ctrl Enter
Noticed oshЫbku Highlight text and press. Ctrl + Enter
We are
My grandfather's front-line letters (part 2)Father told
10 comments
Information
Dear reader, to leave comments on the publication, you must to register.