11 September 2015
107
Not so long ago it became known that the development of the new infantry combat vehicle BMP-3 with the combat module АУ-220М, which received the designation "Derivation", was completed. It was reported that the prototype of this armored vehicle will soon be shown at the international exhibition of weapons and equipment Russia Arms Expo 2015. Already on the first day of the exhibition, the project authors fulfilled their promise and presented a prototype of the updated BMP-3 with enhanced weapons.


From previously published materials, it was known that the “Derivation” project implies the removal of the original turret of the combat vehicle, instead of which a new remotely controlled combat module AU-220М with the original weapons is installed. In addition, there were fragmentary information about some other changes that accompany the installation of the new tower. Nevertheless, until recently all confirmed information about the project “Derivation” was limited only to the fact of the use of a new combat module. 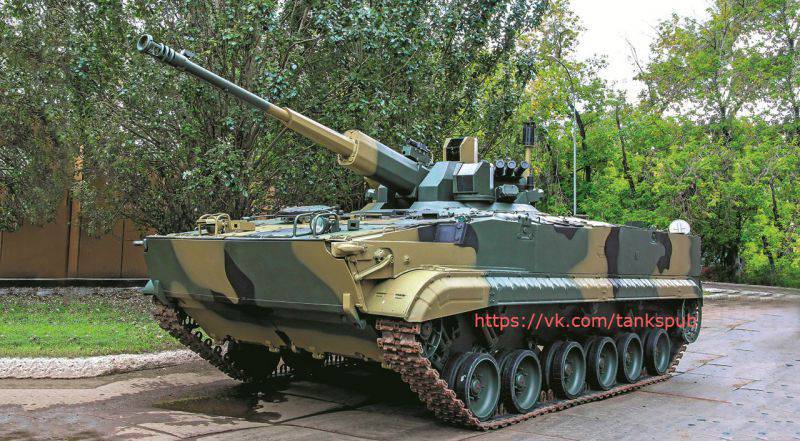 General view of the upgraded BMP-3

Some new details of the new project became known just a couple of days ago, immediately after the opening of the Russia Arms Expo exhibition. Concern Tractor Plants presented a prototype of a modernized BMP-3, which everyone can now see. Through the efforts of the media and enthusiasts, a number of interesting photographic materials have become available to the public: everyone who is unable to attend the exhibition can see the new car.

As follows from the published data, during the “Derivation” project it was decided to slightly modify the basic infantry fighting vehicle. All the innovations implemented mainly concern the layout of the internal volumes of the hull and the placement of various units. In connection with the use of a new uninhabited combat module, it was necessary to rework the layout, as well as change the composition of the equipment of the machine. 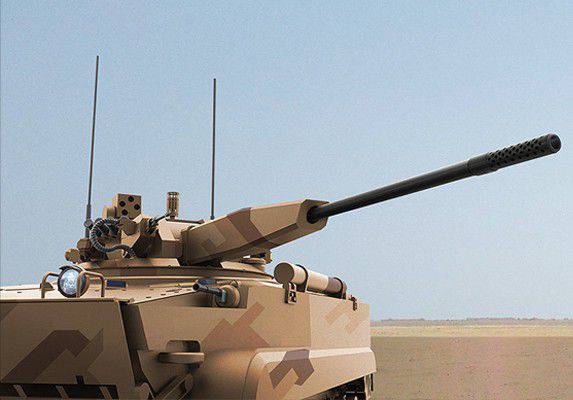 Image of BMP-3 with AU-220M module, published at the beginning of the year. Figure Burevestnik.com

In the base configuration, the BMP-3 has two places for paratroopers, located on the sides of the driver's seat. Next to them are the so-called. Autonomous machine gun installations. The machine of the project "Derivation" lost the front machine guns, and the places of paratroopers remained, but were "redeveloped." Now, the commander and gunner-operator of weapons must sit on the sides of the driver. Their jobs are equipped with a set of special equipment, with the help of which it is proposed to monitor and control weapons.

On the existing photos it is clear that the workplaces of the commander and the gunner are equipped with consoles with liquid crystal screens, control knobs, etc. hardware. Such equipment allows to carry out all operations for managing the combat module, to monitor the environment, etc. As an additional means of observation, periscopic devices at the hatches in the roof are preserved. 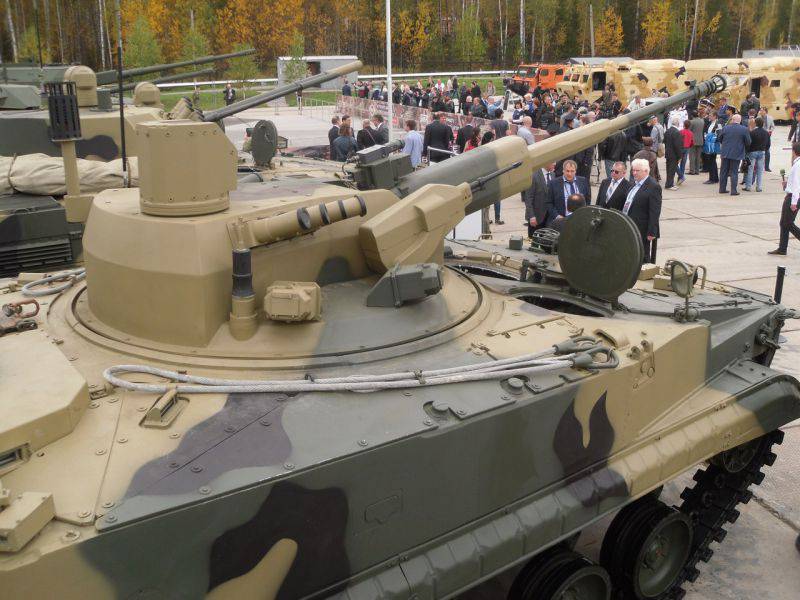 Under the shoulder strap of the tower, on the floor of the habitable volume, mounts are located to support the combat module. The product AU-220М is mounted on the tower chase, and is also attached to a special cylindrical support mounted on the floor of the hull. Under the shoulder strap of the tower inside the habitable compartment there is a wide cylindrical cover of the inside of the combat module. He to some extent reduces the height of the troop compartment, but should not interfere with the landing and disembarking of fighters. 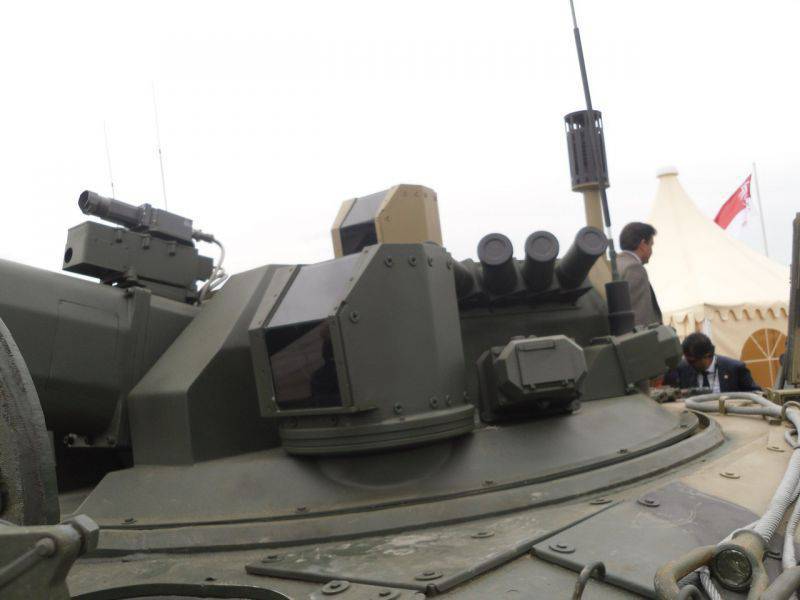 Left side of the module and one of the sights

The layout of the remaining volumes of the body remained the same. Behind the support of the combat module are several seats for the fighters. Behind their backs saved low-profile engine compartment. Above the engine compartment are two passes for landing through the stern. The power plant, transmission and other units of the modernized machine did not change.

The main innovation of the project "Derivation", attracting the greatest interest, is the new combat module AU-220M. This system was developed at the Petrel Research Institute, part of the Uralvagonzavod Corporation. The new combat module is proposed for installation on various combat vehicles, both promising and existing. A striking example of the latter possibility is the prototype combat vehicle, presented at the exhibition Russia Arms Expo. 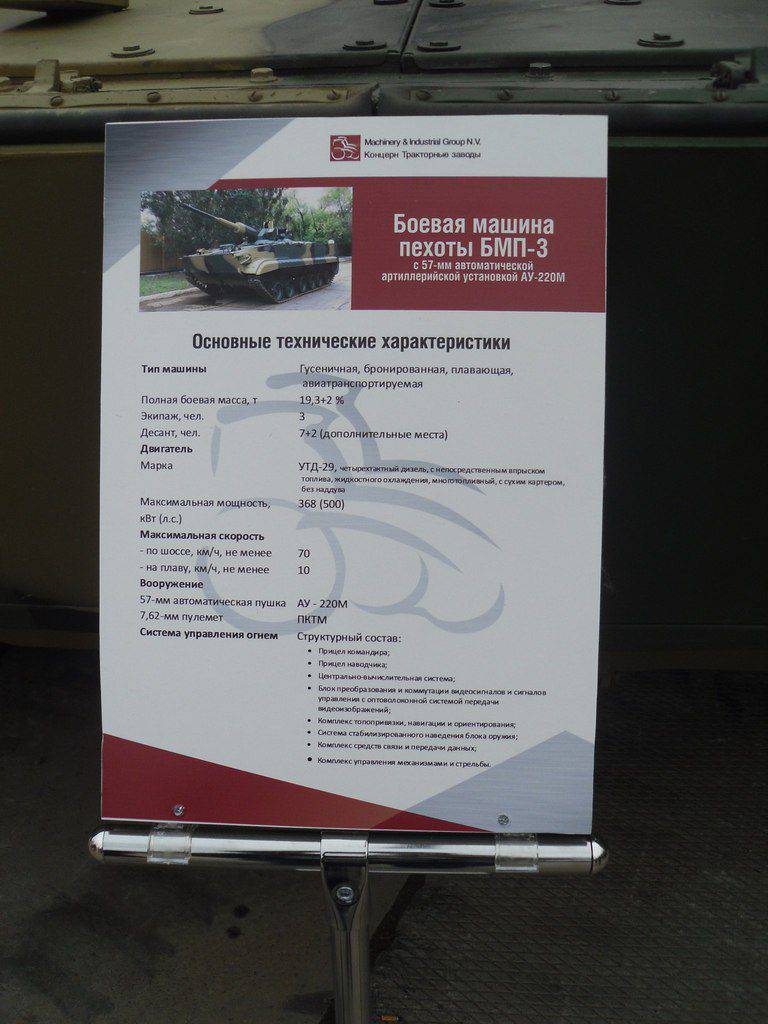 The combat module AU-220M, intended for installation on armored vehicles, was first introduced at the beginning of this year. Then the sample system was demonstrated on a special rack. Now it came to installing the module on the full chassis of a combat vehicle. It was created taking into account the application, including on existing equipment, which led to the use of standard shoulder strap. As follows from the available data, the roof of the base BMP-3, which has become the prototype of the “Derivation” machine, has not undergone any changes.

The basis of the new module is a cylindrical platform with mounts for installation on the chase of the roof and the inner hull support. Part of this platform is located inside the body, part - outside. On the platform above the roof, the armament is fixed, as well as the observation and aiming systems. 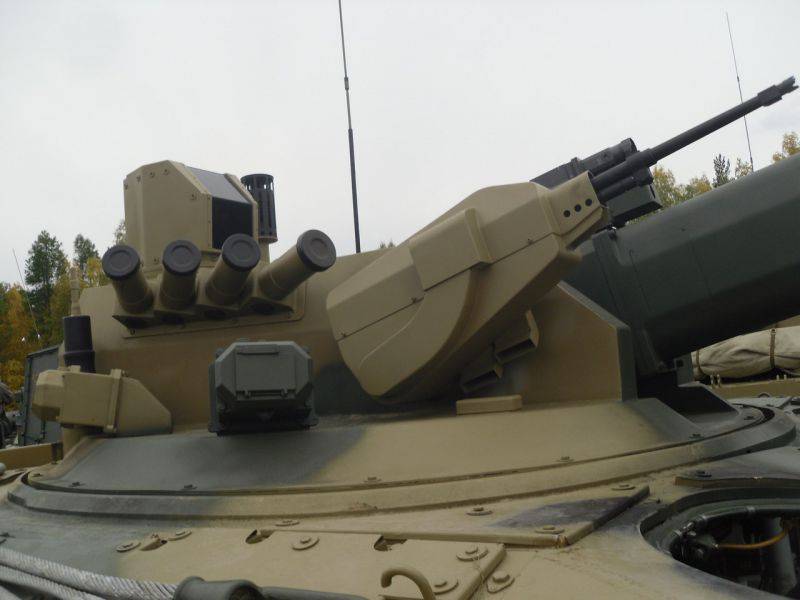 The right side of the module AU-220M, in the foreground machine gun cover

The overall layout of the combat module installed on the “Derivation” machine fully repeats the layout of the previously demonstrated samples. On the platform there is a casing extending in the rear part, which accommodates the breech of the gun. On the sides of the hull smoke grenade launchers are provided. To the right of the main gun there is a swinging casing with a machine gun, which provides guidance for all cannon armament with the help of common mechanisms. To the right of the gun and on the roof of the casing are the sights of the commander and gunner. Also outside the central casing some other units are carried out.

The combat module AU-220M is of great interest because it can seriously affect the further development of armored vehicles and its weapons. During the development of this system, it was decided to return to the almost forgotten caliber 57 mm. Artillery systems of this caliber were actively used earlier, but over the past few decades they have almost completely become obsolete. The authors of the new project propose to recall such a caliber, since it gives certain advantages over existing tools. 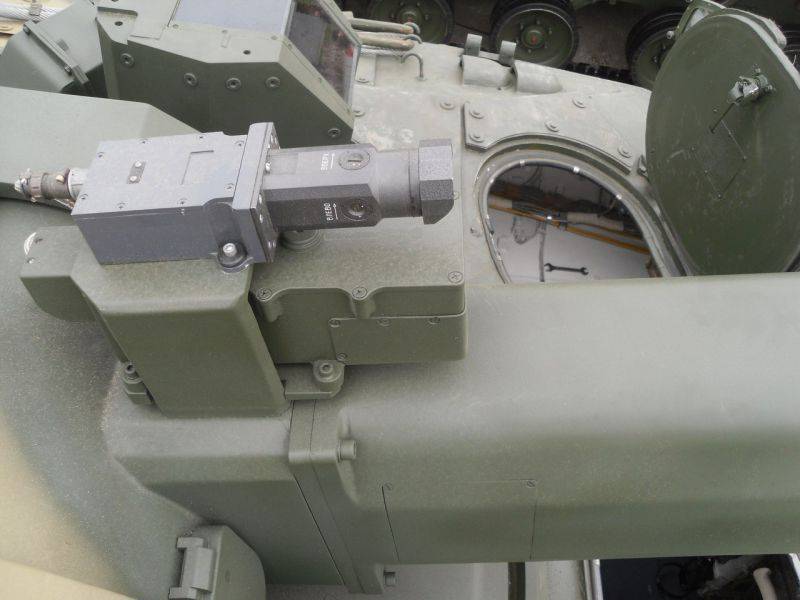 The main weapon of the “Derivation” machine is a 57 mm rifled automatic gun. To protect against external influences, the barrel is equipped with a casing consisting of two modules. On the muzzle of the barrel is presumably programmer to work with controlled fuses. To improve the accuracy of fire and the collection of data on the state of the gun above the breech is a laser sensor for bending the barrel. The reflector of this device, in turn, is behind the muzzle device.

According to the developer, the X-NUMX-mm gun of the AU-57 module is capable of firing at a rate of up to 220 rounds per minute. The design of the combat module provides shooting in any direction with elevation angles from -120 ° to + 5 °. According to some sources, the BMP-60 “Derivation” main weapon’s ammunition consists of 3 projectiles. 200 unitary shots are ready for use and, apparently, are located in the automatic loading shop located in the support platform of the combat module. 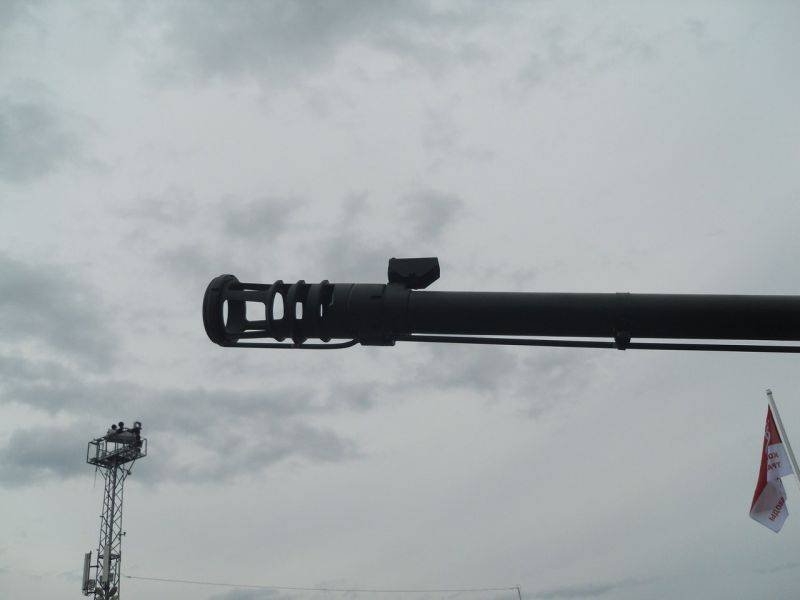 The AU-220M system can use shells of various types, high-explosive fragmentation, armor-piercing, etc. It is also known about the work on the creation of a promising air explosive ordnance. At the expense of a programmable fuse, such a projectile should explode at a given point of the trajectory, hitting enemy manpower or equipment with the maximum possible number of fragments. Depending on the type of projectile used and the parameters of the gun pointing, shooting at a distance of up to 12 km is possible. 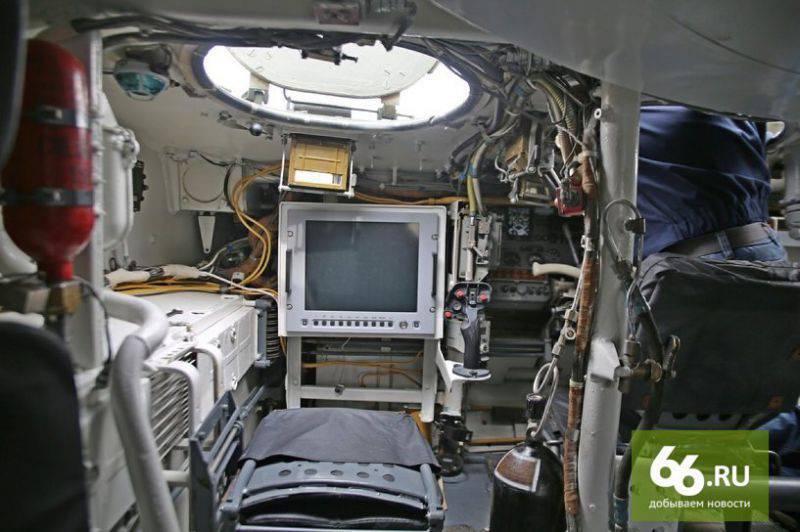 One of the crew's workplaces with a combat module control panel.

The fire control system includes two sights for the commander and the gunner, a two-plane weapon stabilizer, a central computing system and a number of other equipment. Since the places of the commander and the gunner are taken out of the tower with weapons, observation of the terrain, search for targets and guidance of weapons is carried out using video systems. For processing and transmission of video signal as part of the equipment of the updated BMP-3 there is a corresponding block.

To date, the concern "Tractor Plants" and the Central Research Institute "Burevestnik" have built a prototype of the promising infantry fighting vehicle "Derivation". Information about the tests of this machine is not yet available, but there is reason to assume that during the inspections it will demonstrate all its positive qualities and prove the high potential of the new combat module. 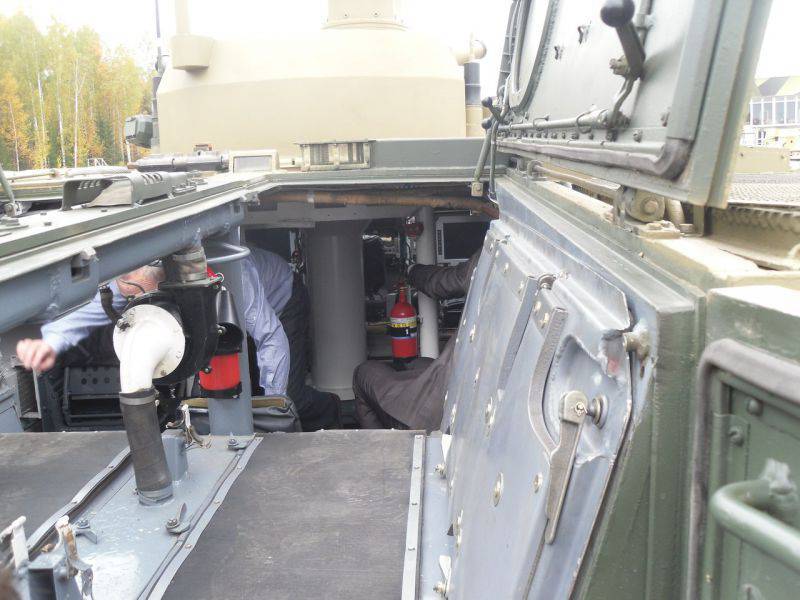 Shortly after the appearance of the first information about the combat module with the 57-mm cannon, the reasons for the development of the project began. The main reason for the emergence of the project lies in the need to increase firepower due to the increasing level of protection of armored vehicles. In recent decades, armored personnel carriers and infantry fighting vehicles "learned" to counter small-caliber artillery. Modern light and medium-class armored vehicles are able to withstand hitting projectiles of caliber up to 30 mm, but so far they cannot cope with more serious threats.

Thus, an increase in the caliber of the gun to 57 mm with a corresponding increase in muzzle energy and other important parameters allows for the effective defeat of the protection of existing and prospective armored vehicles. The use of 57-mm guns will improve the parameters of the destruction of armor, as well as provide a noticeable increase in effective firing range. 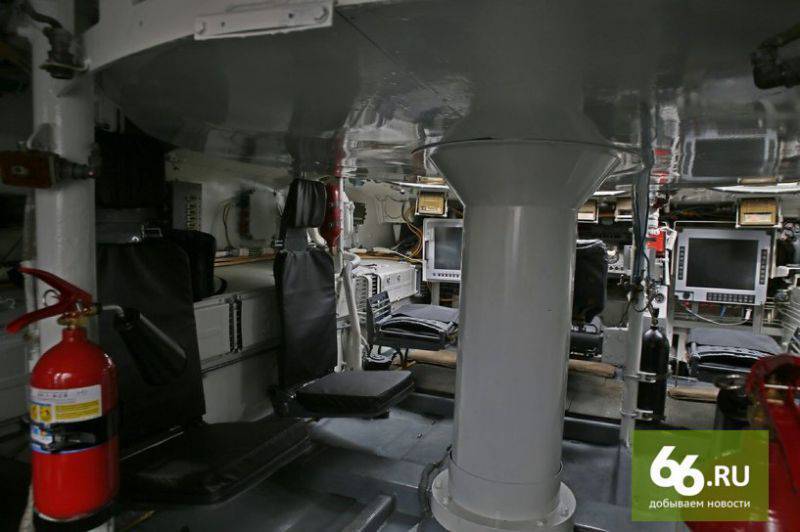 Car interior. In the center is the support of the combat module, in the background are the jobs of the commander and the gunner

As a result, the emergence of new combat vehicles with a combat module AU-220M or other similar systems, the situation on the battlefield should be seriously changed. One of the parties possessing such a technique will have significant advantages over the enemy. Similar benefits will continue until appropriate means of protection and similar weapons are available to other parties to the conflict. As a result, the implementation of new Russian projects can have a noticeable impact on the development of armored vehicles around the world.

At the moment, only one combat vehicle equipped with an AU-220M combat module with a 57 caliber mm gun is known. This is the prototype BMP-3 "Derivation", currently on display at the exhibition Russia Arms Expo 2015. In the near future there may be new types of equipment with similar weapons. In addition, it can be assumed that, over time, such armored vehicles will be put into service and will go into mass production. New weapons should lead to the emergence of serious advantages over potential adversaries, however, the timing of the start of its operation remains unknown. It remains only to wait for new messages on the progress of the program to create 57-mm guns and related equipment.

Ctrl Enter
Noticed oshЫbku Highlight text and press. Ctrl + Enter
We are
Innovation Day of the Southern Military District: Pictures from the ExhibitionThe action “Military service under the contract is your choice!” In Rostov-on-Don: future contract servicemen, exhibitions and “Russian Knights”
Military Reviewin Yandex News
Military Reviewin Google News
107 comments
Information
Dear reader, to leave comments on the publication, you must to register.