Notes of the Colorado Cockroach. Eh, Kiev, where are you flying?

10 September 2015
18
Greetings to you, dear readers! The weekend has passed. Half a week has passed. And today, let it be some discovery for you, I will begin with my walks around the city. For some, let it be a sightseeing tour. For others, the feelings of a cockroach are experienced in their alien home. And someone will probably say that the cockroach has aged, has become too sensitive. 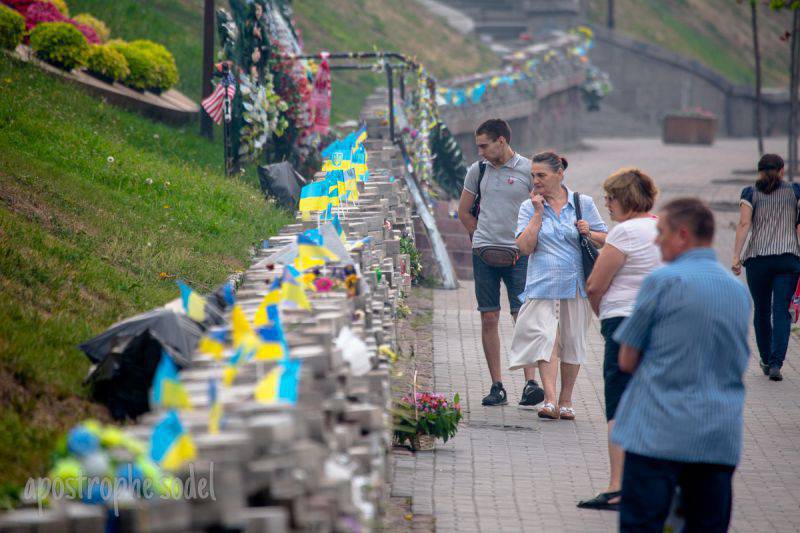 Anyone who has been in Kiev for a long time, at the very beginning of the Square, probably remembers a cozy, kind city, which it was impossible not to fall in love with. The city where people lived. And cockroaches.

Remember the old and beautiful fountain in the main square? The famous "Fountain of Friendship of Peoples"? And I remember ... It was there that she fell in love with my cock. And how many people like me were there every day ... And people, and cockroaches, and birds ... Every creature in a pair. Demolished fountain. More in 2001 year demolished.

And now the square looks like a graveyard. Wherever you look - crosses, crosses, crosses ... And candles. And the beautiful buildings around look like graveyard crypts. I do not know, maybe this is my nostalgia. But the place is unpleasant. As in the city of suicides. Brr ...

And then we went with the Tarakanushka to the Mariinsky Park. On the bridge of lovers. Someone else still remembers the route. And on the observation deck all night they looked at the Dnieper near the arch of Friendship of Peoples. So, this time, except for us, no one looked. No one at all. People must have forgotten how to love.

And embroidery. Around embroidery. It seems that people have forgotten what it is all about. This is not a shirt for everyday wear. Such shirts girls embroidered over the years to give a loved one. Even the Cockroach gave me. And you need to wear it only for big holidays.

When at the beginning of 90-s Galicians appeared on the streets of Kiev, we treated them with some even pity. Well, the guys came down from the mountains. Well, we arrived in a normal modern city. Stunned a little ... Prey, wise. And let their Bandera literature read themselves.

And today Kievites have already disappeared. Exactly. I saw only Galicians. Galicians, whose ancestors were Kievites. This is scary. An incomprehensible act happened to me. It was not the city that swallowed the visitors, but the visitors swallowed the city.

And now that hit me, as they say, first hand. September 8 held a meeting of the Cabinet of Ministers of Ukraine, in which President Poroshenko took part. Here is his speech and attracted my attention. And the text itself is interesting. Therefore I will not describe, but I will break what was said on points which are interesting for you.

1. What happened near the walls of the Rada is a planned provocation. Who organized it, you probably do not need to explain. The president knows.

"The first grenade, which was supposed to fly, was to hit the national guardsmen, causing a fire in response, and the second grenade was intended for the Verkhovna Rada's window."

Like this. And you can not argue. The second grenade was also found. Only now I wonder what kind of idiots planned? One man with two grenades was supposed to disperse a bunch of security officials? And nobody duplicated it? Sorry, but even the cockroach is clear that Gunpowder had seen enough of American cinema. But the pan head preserved the intrigue.

"It will be terrified when you hear the plans of the terrorists, what they were going to do."

Straight headline from the "yellow site" on the Internet, and not the speech of the president.

2. Particular attention is paid Gunpowder most Rade. Now it is clear that the "dead season" has arrived. Samvsesov not pass. No party or bloc can make the necessary decisions. Silenk is not enough. So, there will be another coalition of "democratic forces."

In both. Do not you, the enemies of Ukraine, split and destabilize. Deputies will continue to push the country into the abyss and beyond.

3. Naturally, Gunpowder could not miss his "crown". You understand, I'm about a big war with Russia. Ukraine has already lost all of its blood, and Russia is just that ... Well, not some fraternal people. Does not want to help. And he does not want to fight. Evil, in short, a global scale.

"Russia is betting on destabilizing the situation inside Ukraine." That is, it sends, it means, all sorts of wrong Ukrainians for “rocking the boat”. And it is not clear where they are prepared. Where are these training camps in Ukraine. Learned Russian masked.

“Russia is now placing its main stake on internal destabilization, remembering, perhaps, the biblical wisdom that kingdoms divided from within will fall,” Poroshenko said.

But do not rejoice, dear readers. The president and "who needs to" know that Russia is still preparing for war. And the offensive will be. Someday ... Well, not tomorrow, maybe not this year ... or even this century. But it will be unique.

4. This item was born from the previous one. If the attack will be, then you need to get ready! And urgent. The Russians will come in a hundred or a thousand years, and we are ... and ready! Here it is, our strongest army in the world! They will be frightened and scatter along their Muscovites and Siberians with Buryatia.

"If we are talking about a contract army, then every contract soldier should receive decent cash security. I can say that we spend for the army - what do you think, how much? I have written here that 15 times is a mistake. Not in 15, not in 20, not in 30, but in 40 times less than the aggressor country, "said the president.

In short, my dear compatriots and readers from the "aggressor country", do not see us as new roads, increase wages and pensions, and the standard of living as if it was their back. We will prepare.

Only here is a request to Russia. Guys, please do not increase the costs of the army ... And then we will soon ... this is yours, the Siberian fur will come. You are not hijacking.

5. And again the logic pushed Gunpowder further. If you raise costs, then what to spend? In a sense, where is the money to take? We are on the "leak" from foreign lenders throughout the country.

Yeah ... If it means that some of the debts have been forgiven, but under such conditions that we will only give more further, then this is not a default. This is something new in the economy. Ukrainian way of development.

"In the conditions of a devastating military shock for the economy, we, a single team, did not allow a default, provided macro-financial stabilization and now, as soon as a small opportunity has appeared, we are taking the first step to raising social standards."

As I understand it, I mean an increase in payments from the first of September. Thank you, benefactors! If you spread your boost for a month, they added just one liter of milk. Low bow to rub the floor with embroidery.

6. That came to a logical end of the speech. Great, after all, this thing is a formal logic (it’s a pity, it’s not in every speech).

So, raising social standards in Ukraine.

"... raise social standards for 13-18% for three million public sector employees, seven and a half million retirees, and another half million people receiving different types of assistance."

"This does not cover the losses that people have experienced over the past year. We should speak honestly and frankly about this. We should not really exaggerate today's decision. However, we should not underestimate. This increase in social standards has not only financial and economic, but also political character. It symbolizes the corresponding, responsible attitude of the authorities to their duties, "Poroshenko believes.

I love our power. Here, at least dust sprinkle, and love. For the beauty of lies. No one has learned to lie like our "lords of atamans." Not a country, but a shop before the Christmas holidays. First we increase the price for 100%, and then we write posters "Sale, SALE, all products with 50% discount!"

But the most unexpected is the speed with which our standard of living will increase.

"In the coming days, I plan to meet with representatives of the coalition factions at their request. Already next week, changes to the budget, providing for the growth of social standards, should be voted."

Well, we somehow that we will not survive, and not survive in such a peremog. If only there was no nuclear strike, but nothing. But for people scary.

Still? Sure, not a problem.

We have a new project! You have already forgotten about the “European Val” of our Prime Minister. Well, not yet cope our industry with the production of such a number of mesh-chain-link. But Senya said - finish ... someday.

So here. Our "head" of the state border service, Vasily Servatyuk, announced the creation of the "Sea Wall". Naturally, with the help of the USA. True, Senya forbade plagiarism of the name and did not allow the grid to be used. But...

Yes, and this grid is problematic to pull along the bottom of the Azov Sea. So they asked the fraternal American people to help. Literally brotherly, as you will understand further.

What is planned marine? The explanations of the head of the partner company of the State Border Service of Ukraine Igor Pasternak (by the way, a Lvov citizen who moved to the States after the collapse of the USSR) sound to journalists in Kiev ambitious, but unconvincing: “This is a complex that sees more than 40 km. This is a radar system, it is unique in that it sees in the air, in the water and on the ground. ”

So the sea wall is not a “thorn” above the rabbit ... This is a high-tech project. True, for the amateur is not particularly clear than he is high-tech. But the money will probably cost ... wow! Well this is how much you can cut again?

And finally. Ukraine massively laughs at ... the statement of the Russian SC that Arseniy Yatsenyuk, it turns out, was a militant in Chechnya. I did not read, honestly, this statement, but there is a lot of laughter in the world. Very much our "crawl" looks funny like an action movie. Approximately the same as Mikhail Saakashvili as Kutuzov. 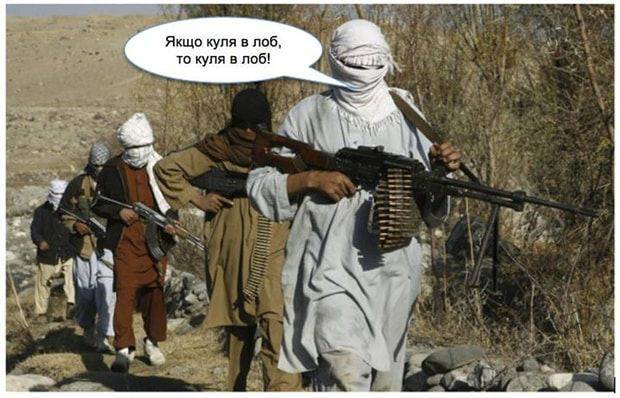 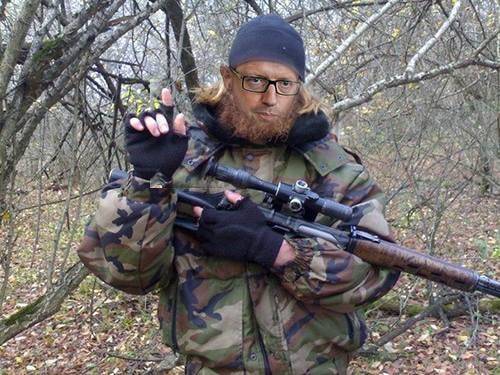 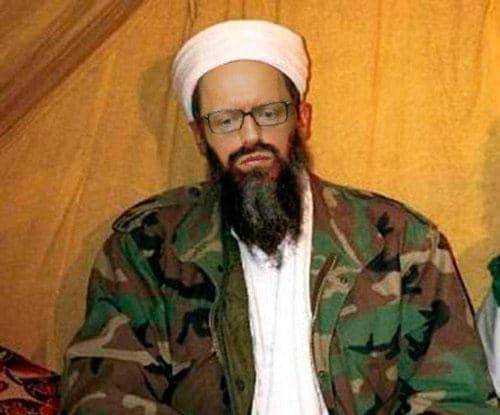 Let me stop here. Time to sleep. Morning on the nose. It is necessary to sleep fast, and forward - for interesting and unexpected events. The speed of life is such that the legs are erased by the morning. See you soon.