13 September 2015
54
In the deaf forests of Latvia, not far from the place where the multicolored waters of the Baltic and the Gulf of Riga meet, there is a unique man-made object, which during the times of the USSR was completely classified and was absent on any maps. And for good reason ... 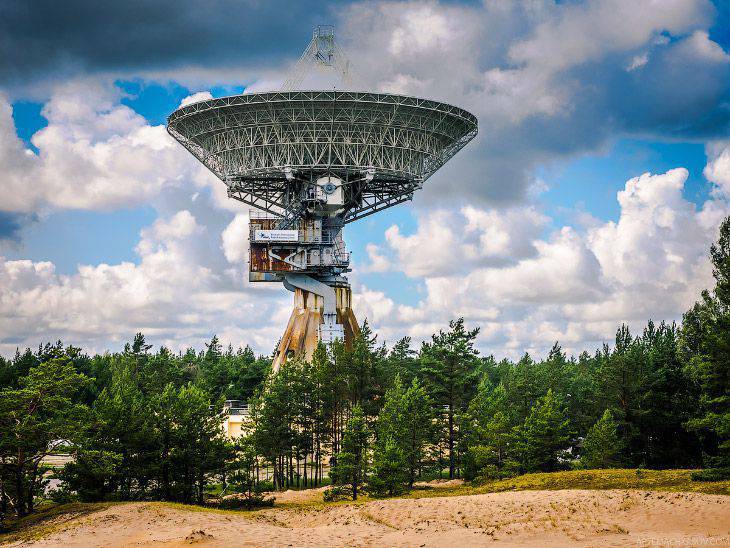 1. We must pay tribute to the skill of Soviet intelligence. More than 20 years have passed since the asterisk object (aka Ventspils-8, aka HF51429, aka 649, a separate space radio intelligence station) was transferred to Latvia, and its purpose is still different legends, sometimes - contradictory. 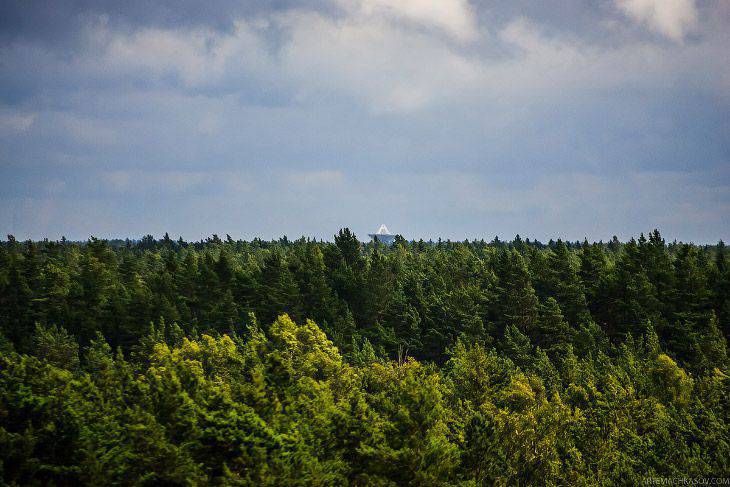 2. The main - and the most secret - part of the object were three radars - with reflectors with a diameter of 12, 16 and 32 meters, respectively. This equipment allowed us to search for objects in space to remove radio and electronic information from them, as well as to listen to telephone calls and radio communications of potential opponents. All data flowed to the Center - the headquarters of the GRU. The literature on this object most often mentions the overhearing of the US State Department and the NATO submarine base in Norway, but surely this is not complete information, and perhaps even a desa, launched to divert talk from the true capabilities of this technology.
Be that as it may, the part functioned successfully from the beginning of the seventies to the beginning of the nineties. There was a protected perimeter around the technical zone, a military town with kindergartens, a school, etc. was located nearby. More than 2000 people lived in the garrison - the military and their families, technical specialists, GRU and KGB officers. 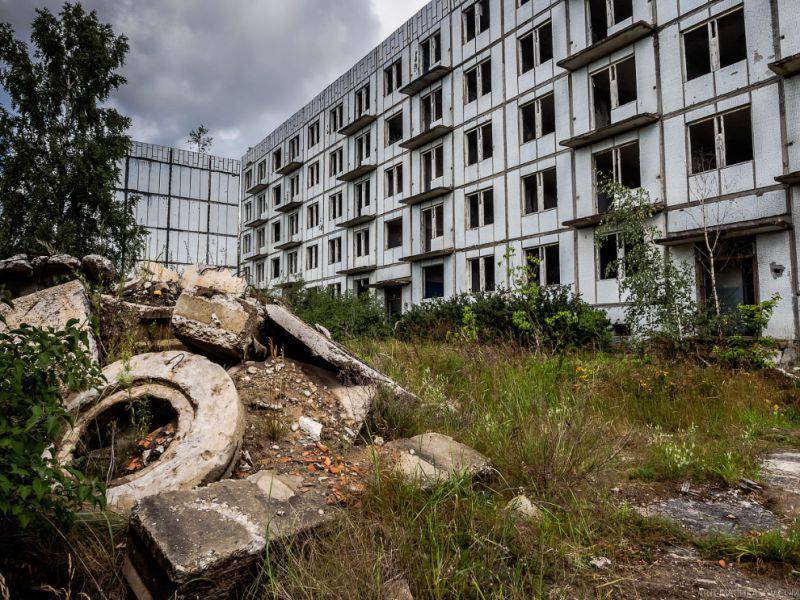 3. After the withdrawal of the Soviet contingent from having gained the sovereignty of Latvia, the military town quickly turned into a ghost town. Marauders plundered everything - not only metal pipes and railings, but even window frames. However, the locals dismantled the abandoned military camps in our Transbaikalia more thoroughly - brick by brick, on concrete slabs ... but we will not be distracted from the topic. 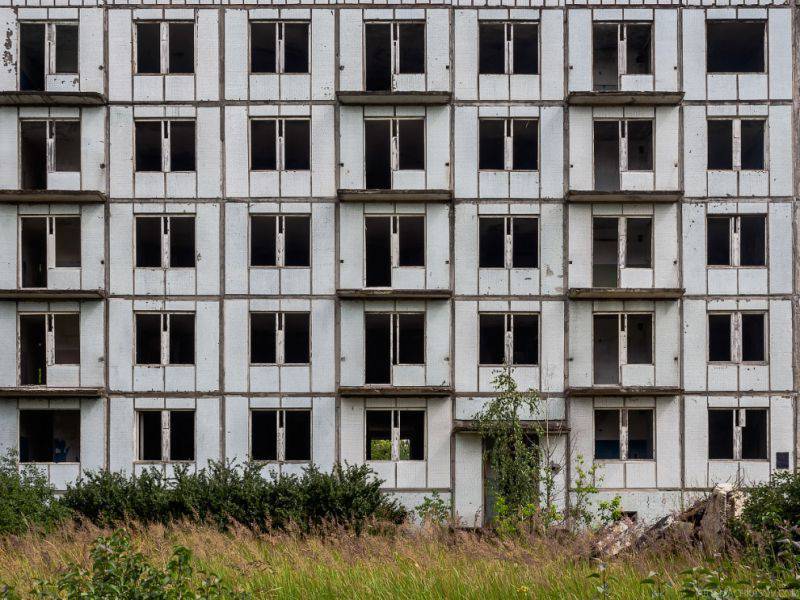 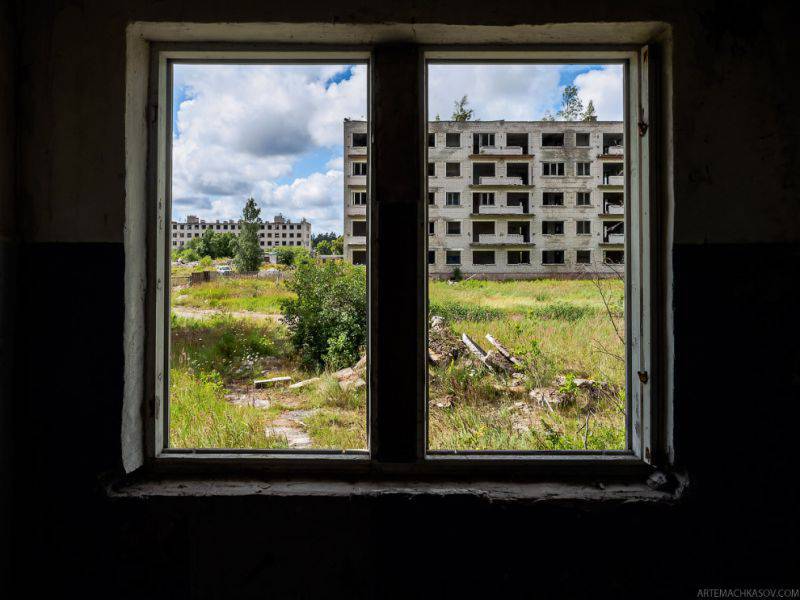 5. In the abandoned pyatietazhkah - signs (or ghosts?) Once prosperous Soviet life. When we flew into space, we went in order, in a single impulse we rejoiced at the little, and pasted the wallpaper on the fresh newspapers that wrote about it. 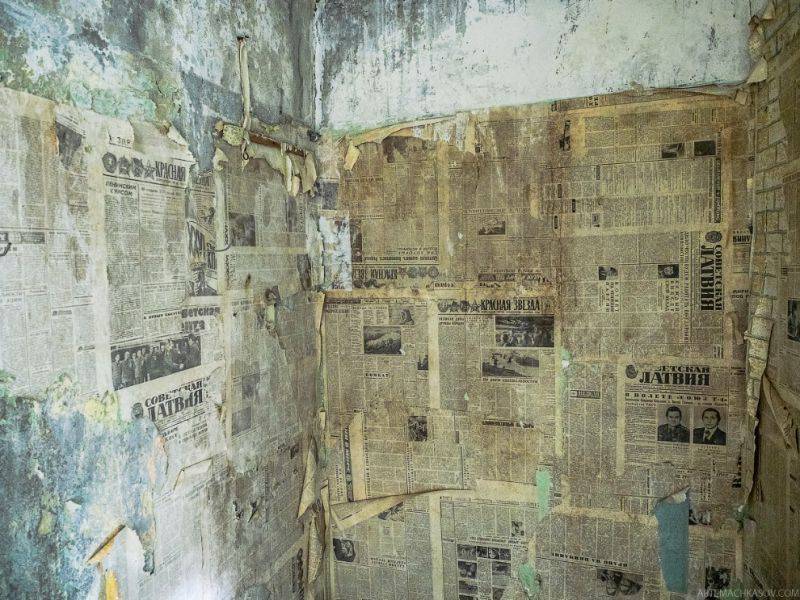 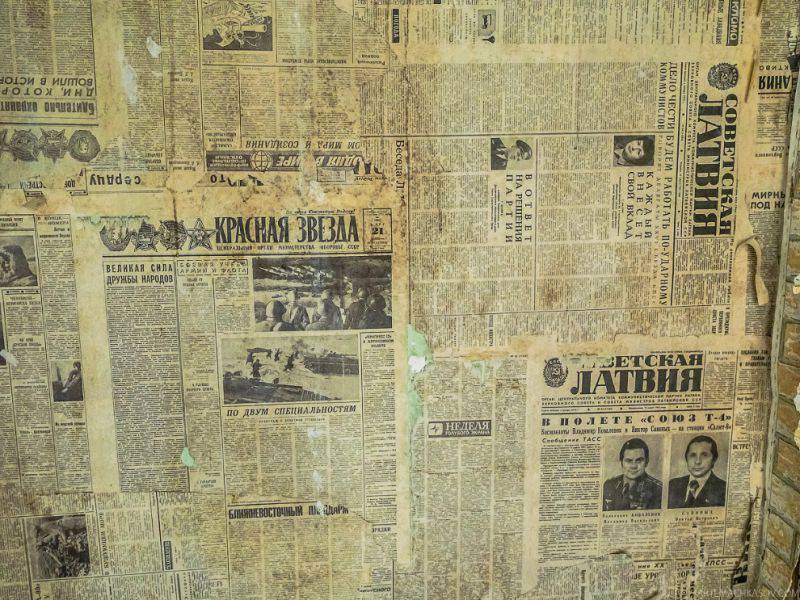 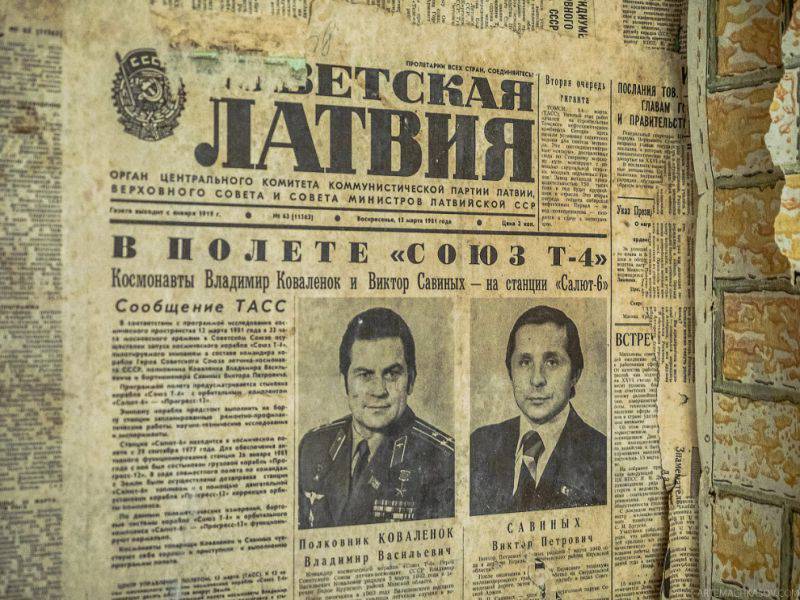 8. The town and the antennas were connected by an underground tunnel - now the entrance to it is walled up, but more recently any curious tourist could get into it.

And here he is, the very "Saturn". 47 height meters. Mirror 32 meter. Weight over 600 tons. At the time of construction - the largest radar of this type in Europe. And now - the eighth in the world. Perhaps among all the post-Soviet expansion, its existence in time and space can be characterized as prosperous. 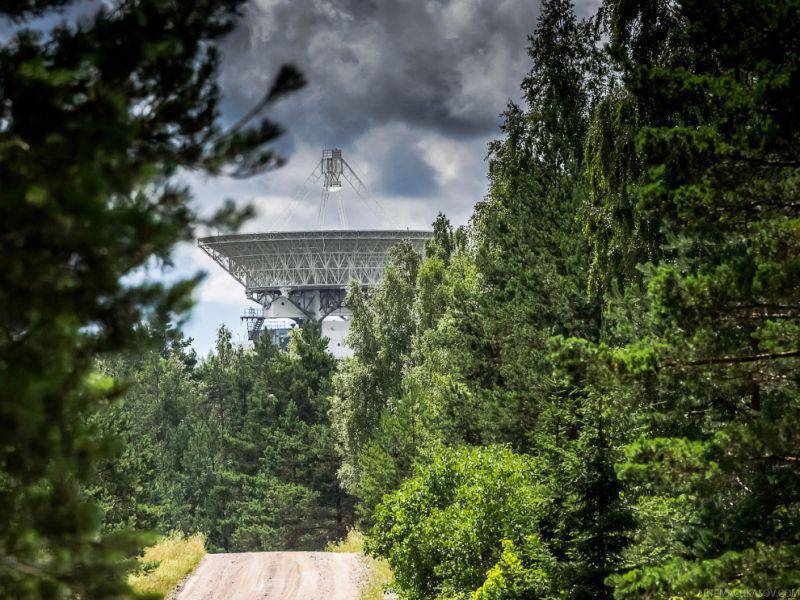 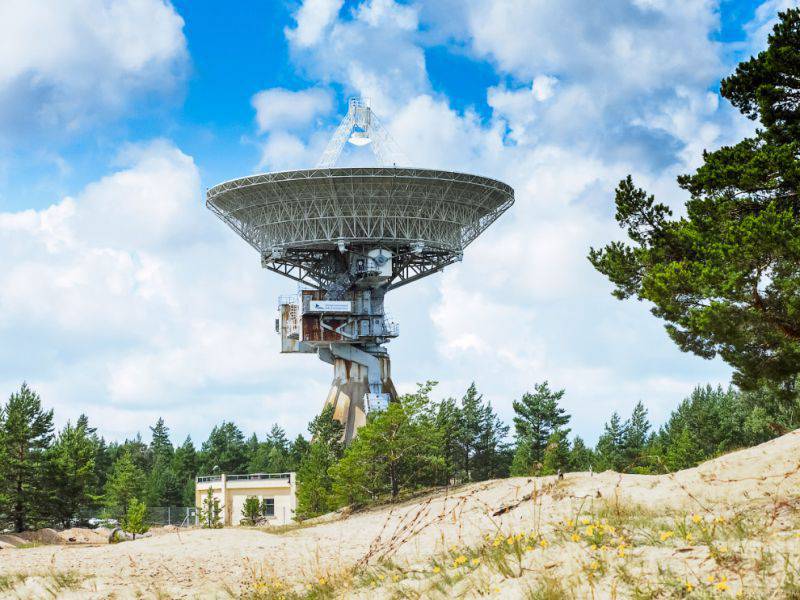 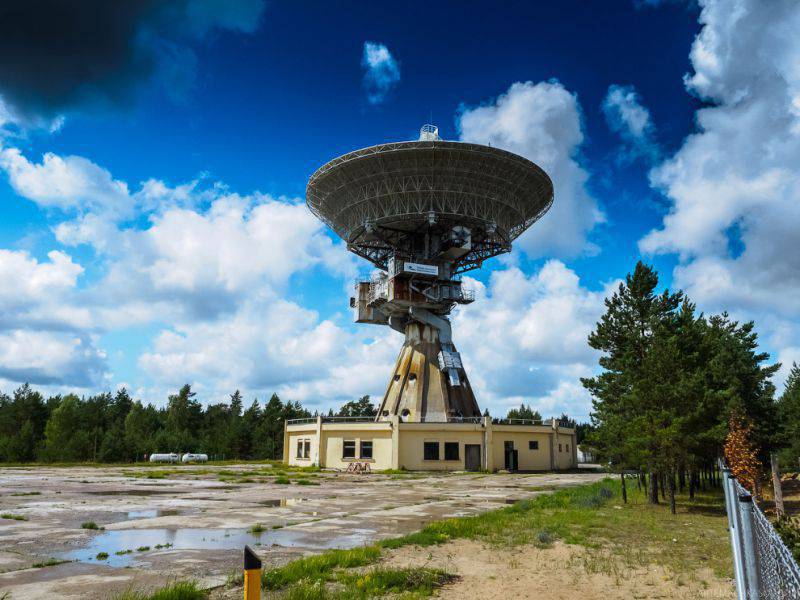 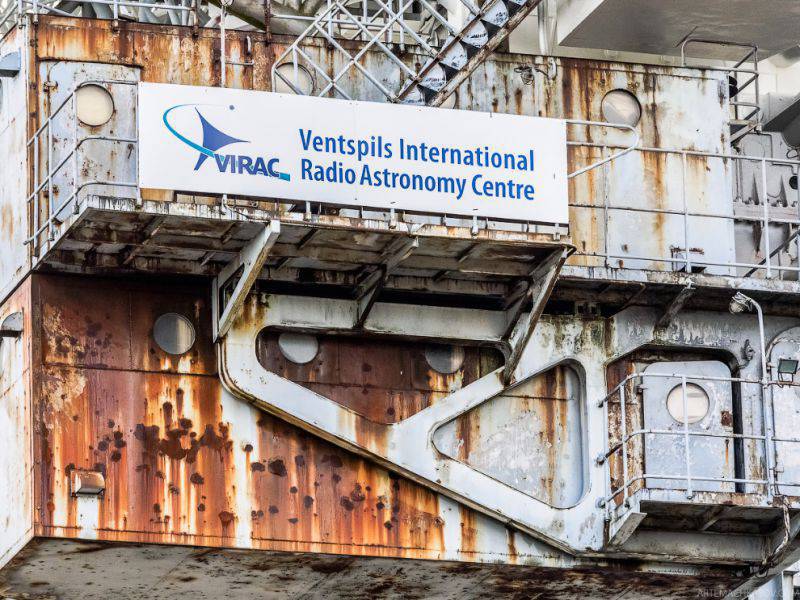 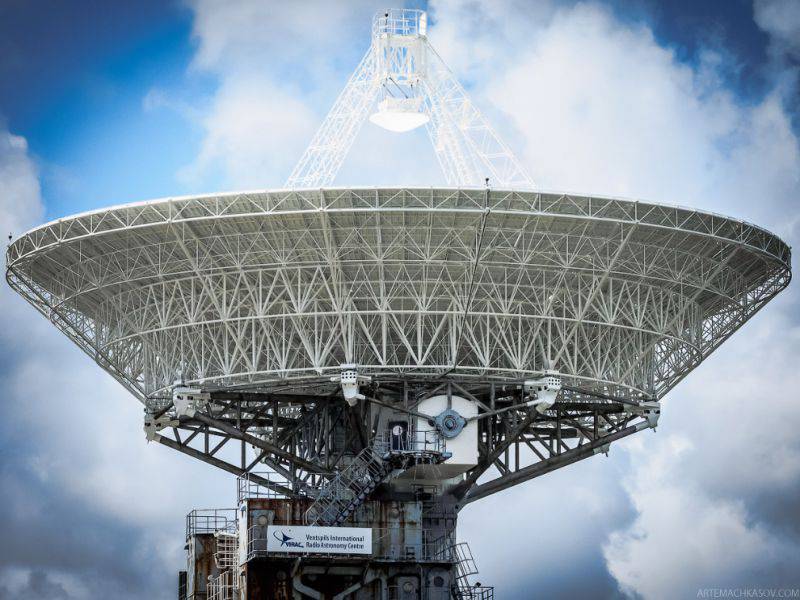 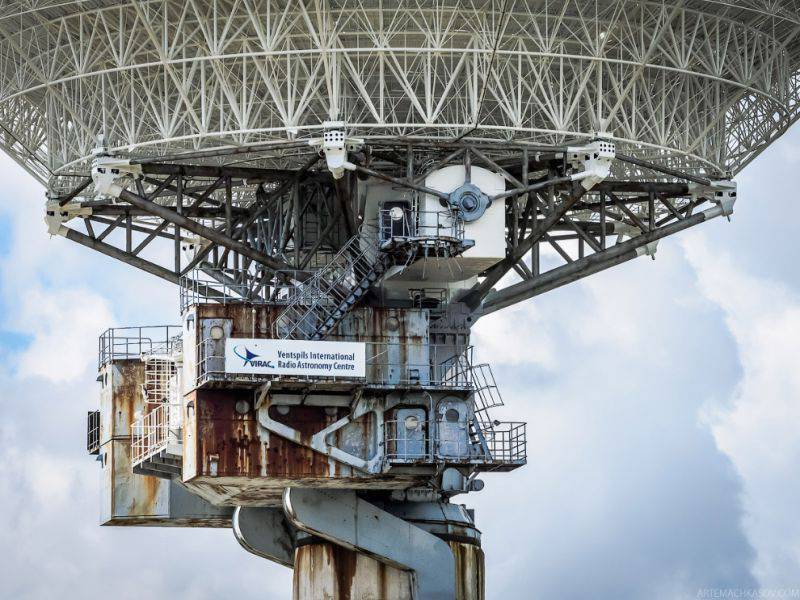 Leaving, our military took with them the smallest 8 meter radar, and thoroughly ruined the rest of the equipment. Cement was poured into mechanisms, nails were hammered into wiring, large cables were cut with axes. Acid was poured into all electronic devices. As a result, the Letts received a pile of very impressive in appearance, but completely dead iron. Hot national sentiment almost led to the disruption of telescopes, but in the end it was decided to transfer them to the Latvian Academy of Sciences.

Honestly, for many it looked like a mockery. What can scientific do with a pile of scrap metal? But the Latvian scientists managed with the help of improvised tools, Soviet books (they all studied in some Soviet universities!) And such and such mothers partially restore the functionality of the radars. So the Soviet "Saturn" in the "citizen" became the Latvian radio telescope RT-32, and the secret Soviet object "Zvezdochka" turned into the Ventspils International Center for Radio Astronomy (aka VIRAC). And the telescope soon began to really work — for example, 16 in February, 2013, spotted and tracked the passage of the asteroid D14. 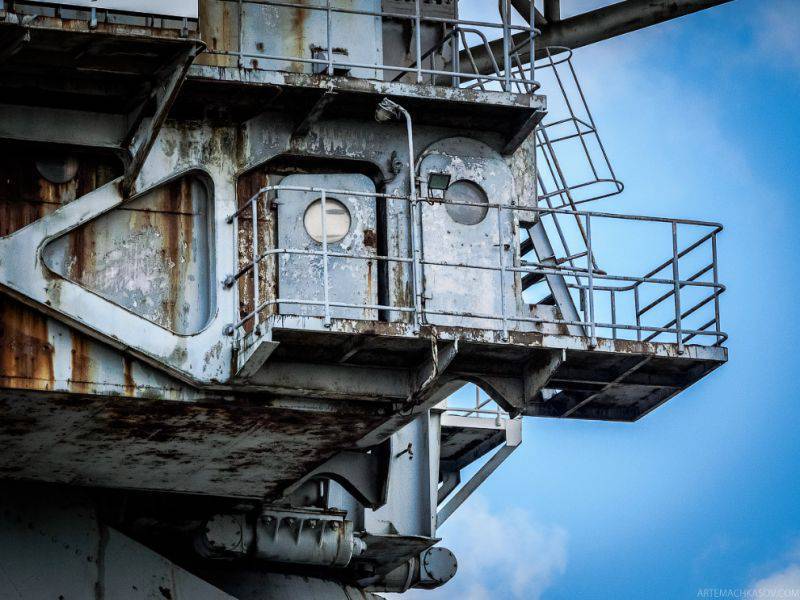 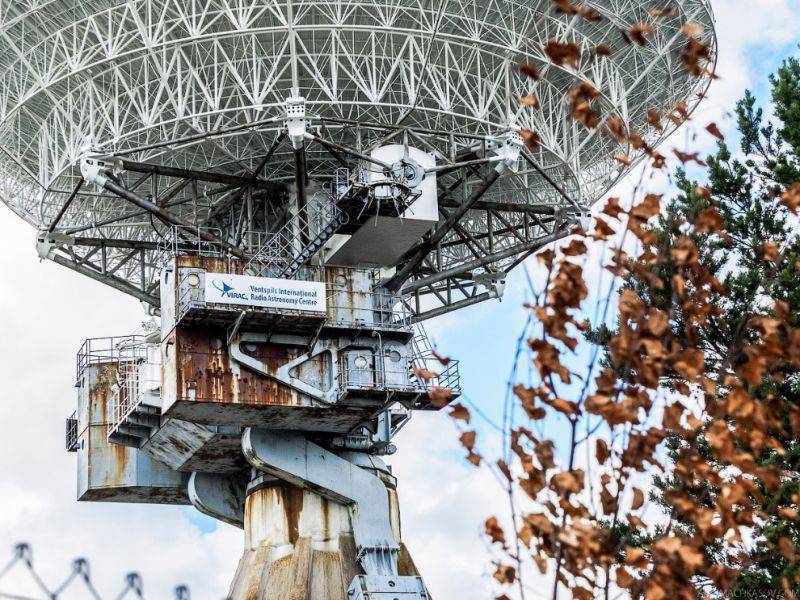 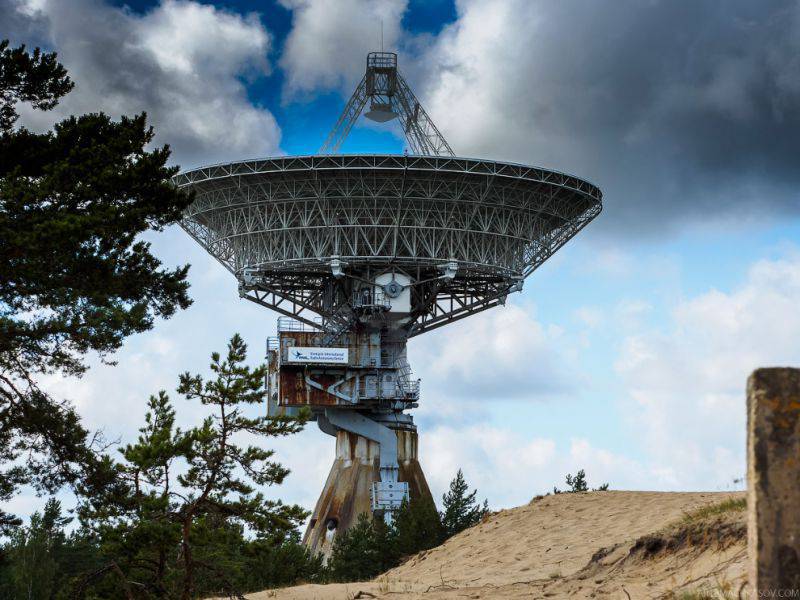 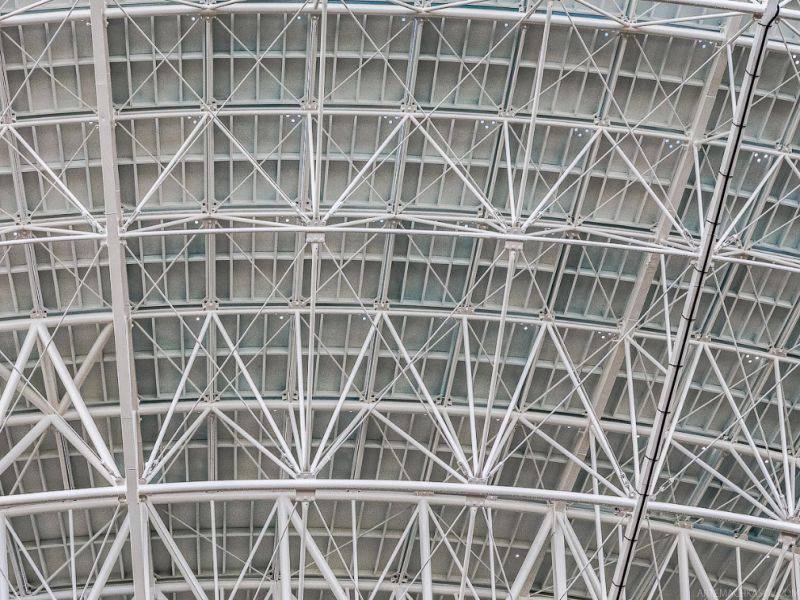 18. Until recently, guided tours were conducted inside the telescope. But with the acceleration of the radar reconstruction (for example, a fully restored reflector was replaced at the 2 a month ago), and the replacement of the Soviet legacy with modern American and European equipment, all excursions are temporarily stopped. 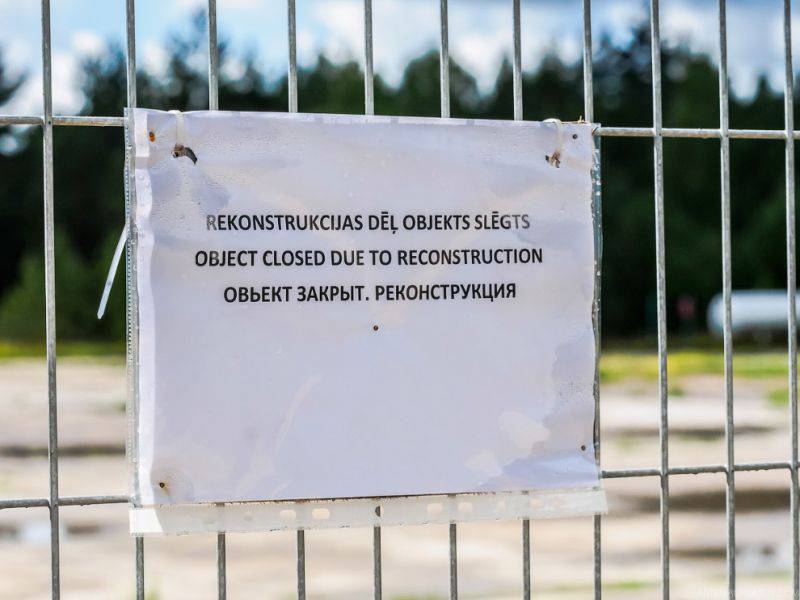 19. VIRAC director Valdis Avotins answered evasively when asked when they would resume. According to him, the reconstruction of the RT-32 is planned to be completed in April of the 2016 year, after which the telescope will become part of a large scientific project, having entered the pan-European radio astronomy network EVN. That is, the excursions will probably be conducted, but most likely now you can only look at the telescope from the outside. 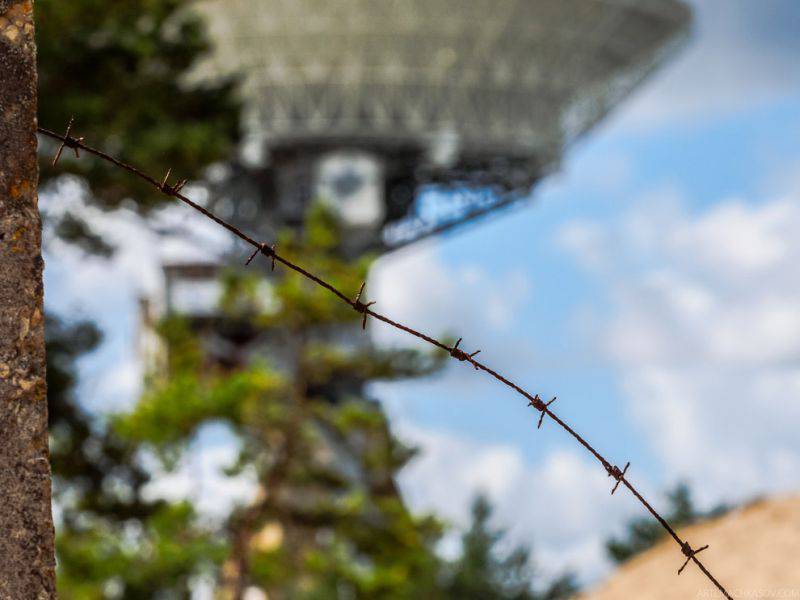 20. After the completion of the reconstruction, Latvian scientists expect to learn more about the cosmos - galaxies, comets, asteroids, closer to the mystery of the origin of life. 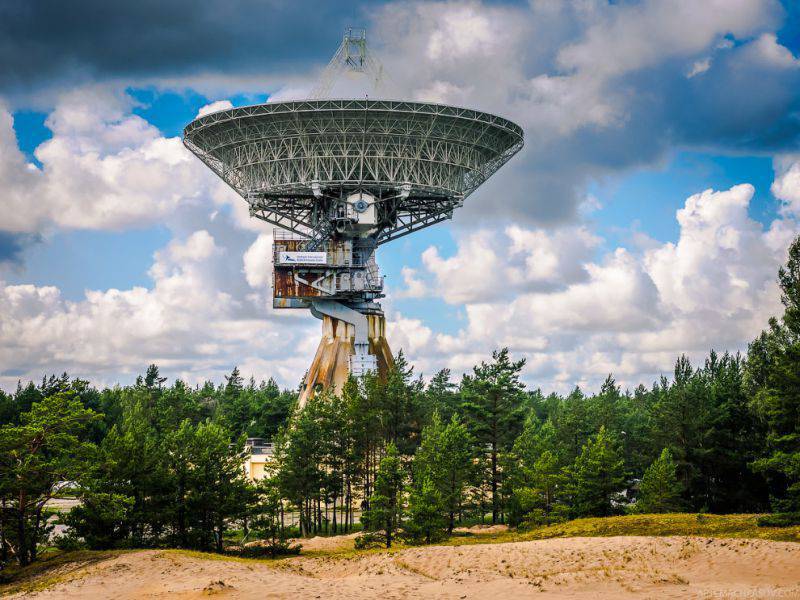 It is possible that the RT-32 will have new dual-purpose tasks. But from a scientific point of view, it is in any case better than destruction and oblivion.

We are in Yandex Zen
Photo Gallery of the American legend Gama Goat
Star
54 comments
Information
Dear reader, to leave comments on the publication, you must to register.