10 September 2015
164
Bulgaria refused Russia an air corridor for military transport planes bound for Syria. The Bulgarian government explained their position as “serious doubts” about the cargo delivered to Syria by Russian planes. Where does the wind blow from? Of course, from the USA. Earlier, the Ministry of Foreign Affairs of Greece confirmed receipt of a request from Washington to close the airspace for Russian flights aviation with goods for Syria. The Bulgarians did not wait for an order from the State Department, "they took the initiative." 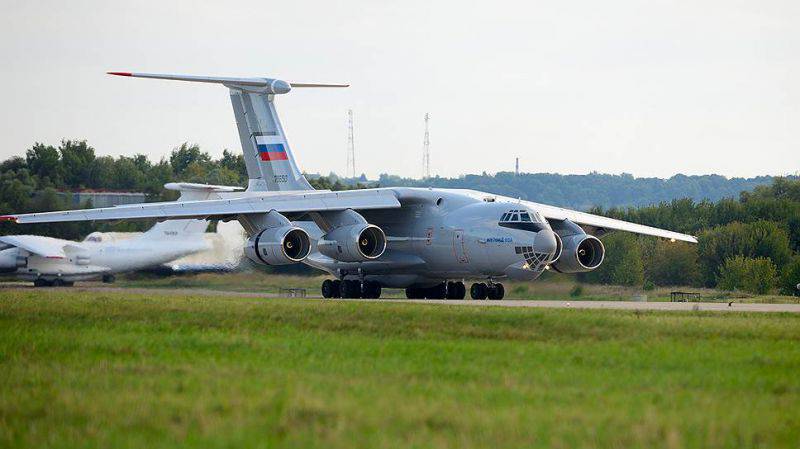 As transmits "BBC", Bulgaria officially refused the Russian Federation in the air corridor for military transport aircraft from the Russian Federation, heading for Syria. “We have serious doubts about the cargo carried by Russian aircraft, and this is the reason for the refusal,” said a spokeswoman for the Bulgarian Foreign Ministry.

The BBC also reminds that the day before the Greek Foreign Ministry confirmed the receipt of a request from the United States to close the country's airspace for flights of Russian aviation with cargo for Syria.

The goods in question are of a humanitarian nature. In late August, 2015 in the Russian Foreign Ministry announced that they intend to provide humanitarian assistance to Syria, as well as to help Russian citizens in this country. The plane of the Ministry of Emergency Situations delivered more than twenty tons of humanitarian aid to Latakia.

A diplomatic columnist for the BBC, Jonathan Marcus, believes that the decision of Bulgaria (a member of NATO) “strengthens the diplomatic intensity and sends a clear signal that suspicions about Russian activity in Syria are growing.” The expert recalled that recently "from various sources" there have been reports of "a new Russian weapon seen in Syria".

The first deputy head of the international committee of the Sovfeda, Vladimir Dzhabarov, called Bulgaria’s ban on the passage of Russian aircraft with humanitarian aid an unfriendly step taken to please the United States. “As far as I know, the States did not even ask - it was they who took the initiative. Unfortunately, our friendly people with common Orthodox roots did not behave completely humanely, because we are talking about supplies of humanitarian aid, and not weapons or manpower, they cite "Vesti" Dzhabarova, who gave an interview to the radio station "Moscow says." “Russia can do without Bulgaria.”

“Damascus opposes the radicals of the Islamic State, Moscow sends him help, Tehran is ready to provide an air corridor for this. And the West only sticks into the wheels. So the Bulgarian government, having received a team from Washington, took a visor, ”said Nikolai Levichev, vice-speaker of the State Duma, a member of the lower house committee on international affairs. - The closure of airspace for humanitarian aircraft for a war-torn Syria is an inhuman and frankly short-sighted act. Other flight routes have already been found for Russian airplanes, but the path of confrontation with Russia, on which official Sofia has embarked, will definitely not benefit the Bulgarian people. In the XIX century, it was Russia that liberated the Balkan peoples from the rule of the Ottoman Empire and contributed to the creation of Bulgarian statehood. It can be seen, the memory of the Bulgarian government is too short. But the Russians are good. ”

In this regard, it is interesting to recall the events of three years ago.

In 2012, the Turkish Air Force forcibly landed a passenger plane en route from Moscow to Damascus. Ankara stated that there had been a violation of the arms embargo. The equipment discovered on board and called the “military cargo” was confiscated.

Russian Foreign Minister Sergey Lavrov explainedthat the aircraft was a dual-use cargo. However, the sanctions regime was not violated: “There was cargo on the plane, which the legal Russian supplier sent by legal means to the legal customer”.

However, it was the initiative of the Turkish side. Turkey, a member of NATO, has repeatedly proved the ability to pursue an independent policy (unlike Bulgaria or Greece itself). And the rejection of the government of B. Assad in Syria is a part of Turkish international politics, which has long been at odds with Russia's policy in the region.

Operation "coalition" against the "Islamic state" (Turkey is actively involved in it today) creates a convenient cover for the future overthrow of Assad in Syria. Understanding this, Russia refuses to participate in the “coalition”. Well, and the members of NATO, like Bulgaria and Greece, are playing against Russia. As you can see, even without waiting for the "FAS" team, Sophia rushed to fulfill the will of the overseas hegemon.

Now it became clear why Washington was intensely exaggerating network rumors about the "enhanced" participation of Russian soldiers and Russian heavy equipment in the Syrian war. The “concern” of John Kerry became clear. The US Secretary of State "attended" to such an extent that he even called Sergei Lavrov the other day. And he said that reports of the strengthening of the Russian military presence in Syria cause the United States to be alarmed.

Kerry said reminds "BBC"that an increase in the number of Russian military and technology in the region could lead to a further escalation of the conflict and even to the "death of a greater number of civilians, an increase in the flow of refugees and the risk of confrontation with the coalition acting against the Islamic State."

This “bell”, we add, was a clear warning to Russia. And the messages about him passed all the major Western media. Thus, the team "face" was distributed, which was correctly interpreted and zealously executed in the Bulgarian Ministry of Foreign Affairs.

However, Bulgaria was not able to fully prevent the air transportation of Russian humanitarian aid. By its decision, it only managed to declare its loyalty to the ideals of NATO, nothing more. And at the same time cool the already cool relationship with Moscow.

In the Russian media 8 September, information appeared from the Greek newspaper Katimerini, which allegedly has its sources in Moscow. According to the publication, the new route from the Russian Federation to Damascus held via Iran.

on September 9 Interfax reported that Russia received permission from Iran to fly aircraft to Syria.

“To date, the Russian embassy has received permits for all of the requested flights of Russian aircraft heading to Syria to send humanitarian aid,” Maxim Suslov said in a telephone interview with the press attaché of the Russian Embassy in Tehran.

Must be on the eve of September 24 we will learn about the formal extension of the ban. Formally, because airplanes will fly another route ...

We are in Yandex Zen
Results of the week. “Now people should be more relaxed, and look at the questions shirse”
Situational analysis of the death of the MH17 flight (Malaysian Boeing 777), made on the basis of engineering analysis from 15.08.2014
164 comments
Information
Dear reader, to leave comments on the publication, you must to register.