9 September 2015
63
In Rybinsk, located in the Yaroslavl region, 3 September 2015 was opened the first industrial workshop in Russia for the production of small and medium-sized unmanned aerial vehicles (UAV) of the new generation. Reports about it TASS. The new production was created by the United Instrument-Making Corporation (DIC), which is part of the Rostec state corporation. More than 120 million rubles have already been invested in the creation of a new UAV production facility. At the enterprise’s facilities in Rybinsk, it is planned to assemble promising middle-class drones “Korsar” and some other short-range UAV models.


"Unmanned aviation “This is a new production sector for the Russian Federation, which is located at the junction of the radio-electronic and aviation industries,” said Alexander Yakunin, Director General of the United Instrument-Making Corporation. - The demand from both the state and private customers in this area is simply enormous, but so far there is a certain shortage of necessary technologies and production capacities that impede its implementation on a Russian scale. Therefore, we are now forming the necessary industrial base, working to create a leading scientific and technical reserve, and are engaged in honing technologies. The new production workshop in Rybinsk is only the first step; we have plans to further expand and modernize this production (we are talking about KB Luch). Our existing developments in the field of creating unmanned aircraft, control and communication systems, as well as modern equipment, which are equipped with new workshops in the Yaroslavl region, will allow us to fulfill orders for UAVs of any complexity in the future. ” 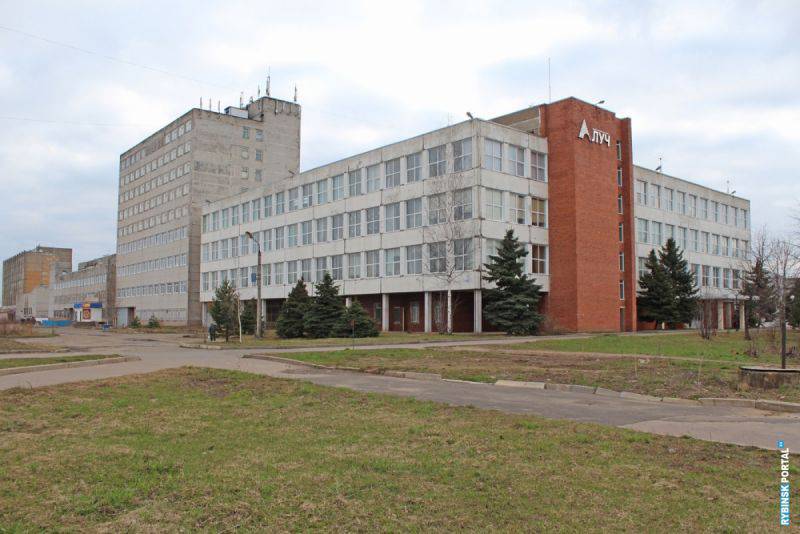 The new production building, the total area of ​​which is 2200 square meters, was erected as part of the first stage of a large-scale investment program, which today is being implemented on the basis of the Design Bureau "Luch" from the city of Rybinsk. More than 120 million rubles have already been invested in the construction and technical equipment of this production at the expense of the company's own funds, as well as funds allocated as part of federal targeted programs.

“An integrated approach was implemented in the production opened in Rybinsk: we are doing not only the glider of an unmanned aerial vehicle, but all of its“ stuffing ”, including onboard computing systems, communication systems, control systems, and various units, the Luch »Mikhail Shebakpolsky. - We have, without exaggeration, introduced technologies that can be attributed to world-class technologies. For example, allowing to work effectively and quickly with polymer composite materials and plastics, to carry out their molding by various modern methods, including fully in an automated mode. At this point in time, we have the opportunity to release almost any UAVs weighing up to 500 a kilogram and a wingspan of up to 10 meters. And we also have everything necessary for the production of a full range of related equipment - mobile control stations for UAVs, transport launchers, containers for their transportation, etc. ” 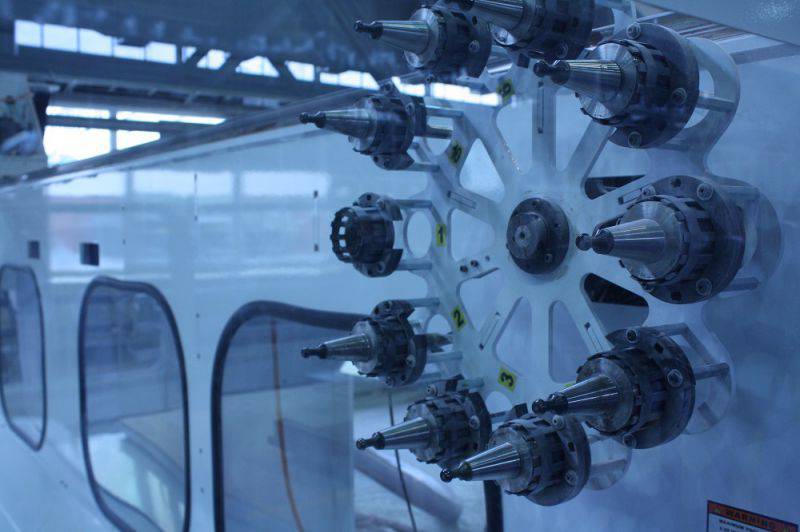 The process of full formation of the production site in Rybinsk is planned to be completed by 2018 year. Within the framework of this project, another workshop will be built, intended for the production of individual components from composite materials and assembly of UAVs. The first UAV, the mass production of which will begin on new industrial facilities in the very near future, should be the medium short-range UAV “Corsair”, intended for reconnaissance and monitoring of the situation in 120 km radius. A promising unmanned aerial vehicle was first demonstrated in June of the current year at the Army-2015 forum, the device was shown to be closed. The first demonstration flights of the new UAV were to be held as part of the ceremonial ceremonies that took place at Luch Design Bureau in early September of 2015. The Governor of the Yaroslavl Region Sergey Yastrebov, representatives of the Russian Ministry of Defense and the leaders of the defense industry took part in the opening ceremony of the new UAV production plant in Rybinsk.

At the same time, 3 of September, the general director of Luch Design Bureau Mikhail Shebakpolsky told reporters that the radius of action of the newest domestic short-range unmanned aircraft Corsair will be increased from 120 to 200 kilometers. In addition, according to Shebakpolsky, in the future, the company is going to expand the capabilities of its UAV, so that it will be able to carry a variety of electronic warfare systems and the latest intelligence tools that will surpass existing systems. Also, Mikhail Shebakpolsky told reporters that in case of the appearance of corresponding ammunition in Russia, the Corsair drone could also become a shock, good in our country, work is already underway in this direction. According to Luch, the general director of the design bureau, the mass of their Corsair drone is about 200 kilograms, and the wing span of the drone is 6,5 meters. The complex "Corsair" includes several UAVs, ground control points and other related equipment. 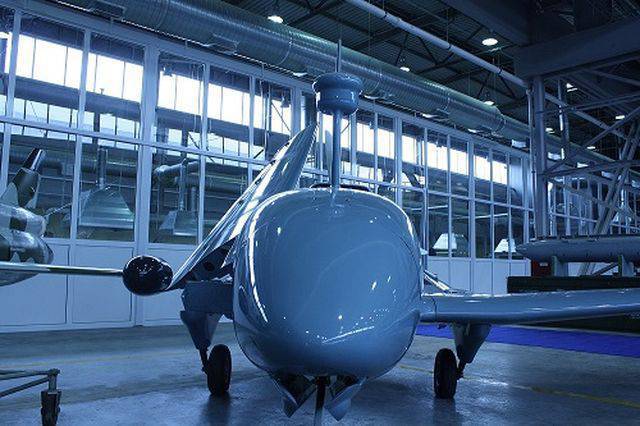 “We expect that at the beginning we will be able to collect approximately 20-25 drones annually in a new production, but in the future we would like to go to the figure - 100 drones per year. In addition, at the facilities opened in early September, we are going to produce experienced UAVs, work on which is now underway, ”Shebakpolsky said. According to Luch, the general director, the new production will produce not only UAVs, but also related equipment. We are talking about outboard containers for a variety of aircraft and transport-launchers.

Mikhail Shebakpolsky added that in the future another UAV may appear in the Corsair unmanned complex, which will differ from the existing apparatus with certain characteristics. According to the developers, the Corsair should be the first mass short-range unmanned aerial vehicle for the Russian army. His main task will be to monitor the situation on the battlefield. State tests "Corsair" is planned to be completed in 2016 year, and already in 2017 year it is planned to launch the serial production of this drone, which so far exists only in the form of prototypes and was first shown at the Army-2015 forum. 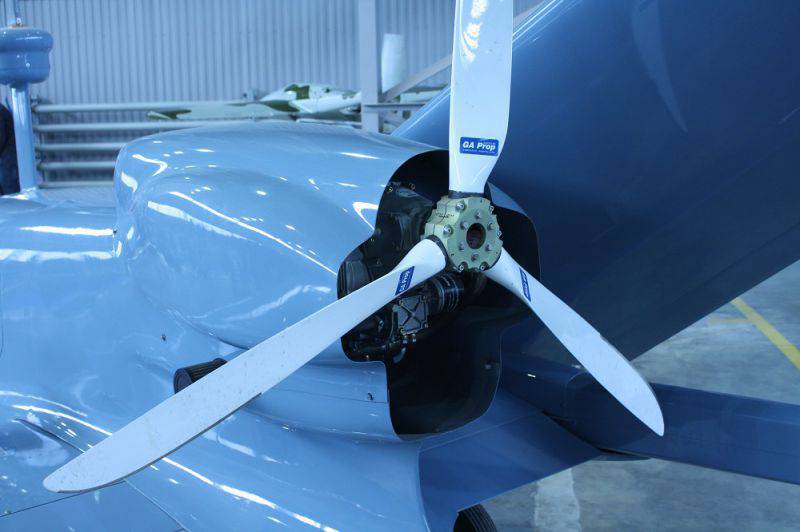 It has already been said about the development in Russia of the first target program for the development of unmanned aerial vehicles, which is designed to coordinate relevant activities in the state armament program for the 2016-2025 years. In the event that the program is adopted, the developers promised that by 2025, the state structures would receive several hundred Russian-made unmanned vehicles. According to Russian Defense Minister Sergei Shoigu, it is planned to spend almost 2020 billion rubles on a program to equip our army with UAVs, which is designed for up to 320 of the year.

To this we can add that at present, work is underway in Russia on the development of UAVs, which can be used to detect modern aircraft built on the basis of stealth technology. The model of a promising drone was demonstrated on the display of one of the MAKS-2015 stands. The United Aircraft Corporation is working on the creation of an innovative military drone, the subcontractor is Radio Electronics Technologies, which was charged with creating electronic warfare systems, communications, self-defense apparatus, and the creation of a ground control station. According to the developers of the promising drone, he will be able to "see" American fighters of the fifth generation F-22 and F-35, as well as the unobtrusive B-2 Spirit strategic bomber.

Radar, avionics and electronic warfare systems for the new Russian drone, according to the deputy head of KRET, are derived from the “stuffing” produced for the Su-35 multi-role fighter and the Ka-52 attack helicopter. According to the degree of innovation, the Russian development will be able to compare with the large-sized Chinese BLA “Divine Eagle”, the tests of which, according to some sources, have already begun.