Battle of Borodino: who won? 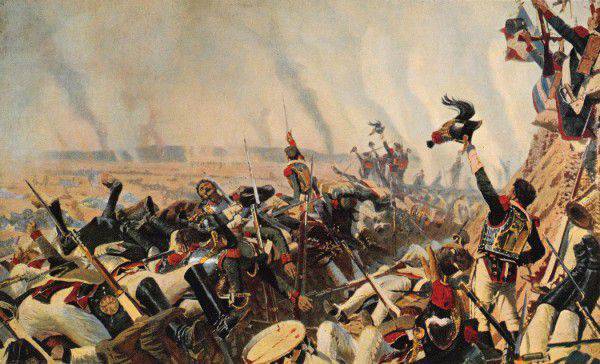 The great battle took place on 26 August. In a new style - September 7. The official Day of Military Glory due to an error in the calculations celebrated 8-th. However, it makes sense to remember such a battle three times and four times.

Lermontov's “Borodino” is a miracle of Russian poetic heroics, we all remember its lines, but we often make mistakes in intonation, starting to recite: “Tell me, uncle, it’s not for nothing ...” After all, these are bitter lines! Lermontov and his hero mourn the fact that they had to retreat, that they had to give back to Moscow, that the heroic generation did not block the enemy’s way to the capital of the capital. Bitterness has been living in Russian hearts all summer 1812 of the year.

All summer 1812, Russia languished in anticipation of the general battle. Prince Bagration proposed to lay down his bones on the banks of the Vistula, not letting the enemy go to central Russia. This is in the spirit of the traditions of Peter the offensive war, in the spirit of the Suvorov school to which Bagration belonged. But the emperor approved another tactic, the main task was to save the army in case of loss of territories. Russia was not accustomed to defeat - and all the bitterness that came to hatred, society poured on the Minister of War, who commanded the 1 army, on Barclay.

The emperor, who did not trust the Russian commanders too much, was forced to push Kutuzov in order to restore the morale of the army and, last but not least, the capital’s rear.

Cunning Mikhail Illarionovich in all circles truly loved not many. But then there was no more authoritative and politically astute commander in the Russian army. It is believed that he did not add to the strategy of Barclay, that not the best way used the capabilities of the army in Borodino ... But history not rewrite. And the glory of 1812 of the year is in many respects connected for us with the image of a cautious but brave old man.

With the dream of a decisive battle, the army was retreating ever closer to Moscow. The warriors were ready to defend White-stone steadfastly and selflessly. The army was ready to join the militia. Kutuzov imperceptibly pacified the impulses of the patriots: he counted on a long campaign and even did not treat the Battle of Borodino as a “final, decisive battle”.

So, by the beginning of the battle, the 1 Army of Barclay de Tolly was deployed on the right flank of the 3 infantry, 3 cavalry corps and reserves (76 thousand people, 480 guns), the front was covered by the Kolocha River. The left flank was held by the smaller 2 Army of Bagration (34 thousands of people, 156 guns). There, the landscape was worse adapted for defense. Not surprisingly, Napoleon struck the main blow on the left flank. 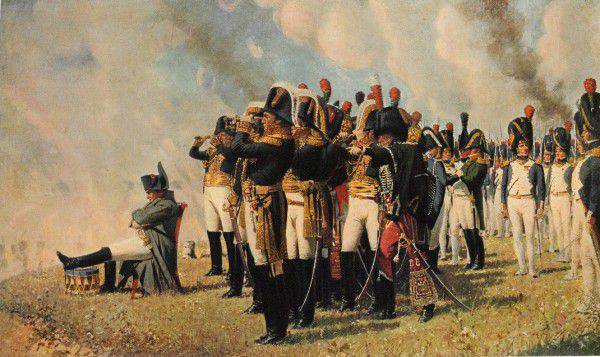 Napoleon at the Borodino Heights. Artist Vereshchagin (1897)
From the first artillery salvo in the early morning of September 7, the French pressed on the left flank. Who was standing that morning on the Borodino field, on the hills, in the coppices? Pupils of the invincible Suvorov - Mikhail Kutuzov, Peter Bagration, Mikhail Miloradovich, Matvey Platov, Alexey Ermolov, Ivan Dorokhov. Generals accustomed to victories, eagles of the empire.

Perhaps the best commentator on World War 1812 of the year - Fedor Glinka. Officer, poet, theologian. On the great battle of Borodino, he wrote in detail and at the same time artistically. He caught the element of battle. This is how Glinka described one of the key watches of the Battle of Borodino:

“Imagine a chemist’s workplace, imagine how, from two vials, he merges two hostile moisture into one vessel. Merged together, they hiss, bubbling, whirling, until, both decomposed, clinging, evaporate, leaving almost no trace of themselves. So two forces, two armies, Russian and French, merged into one bowl of death, and, I dare use the expression: chemically decomposed, destroying one another. ”

We have lost the habit of such a writer's gaze. In it - vigilance without posturing.

The Russian land did not know such a tense battle. The most bloody battle ensued around the Semenov flushes, which are often called Bagration. Three fortifications were quickly built shortly before the battle. Artillery batteries settled there, and Bagration's troops defended around.

The battle near the fortifications lasted six hours, here Napoleon threw the main forces. The powerful blow of the troops of marshals Davout and Ney made the defenders flush flutter. The French seized the fortifications. But the Russian grenadier counterattack and cavalry led by Bagration followed. Flush repulsed! 35 thousands of French on this piece of land attacked like a hurricane. Bagration had 20 thousands.

Here a fierce counterattack was conducted by cavalrymen of General Dorokhov. Here General Bagration was fatally wounded. Here General Tuchkov died, picking up a banner from the hands of a wounded standard-bearer.

“As the forces of Bagration received reinforcements, they, with the greatest determination, went forward with the greatest determination to regain their lost positions. We have seen how the Russian masses maneuvered, like moving redoubts, humbled iron and cast down fire ... As long as they had any strength, these brave soldiers again began their attacks, ”the French general recalled, a participant in the battle.

In the battle for Bagration's flash, Napoleon lost about 30 thousands. As a result, the enemy took up fortifications, but did not break through the defense. The Russians retreated only at 400 steps. 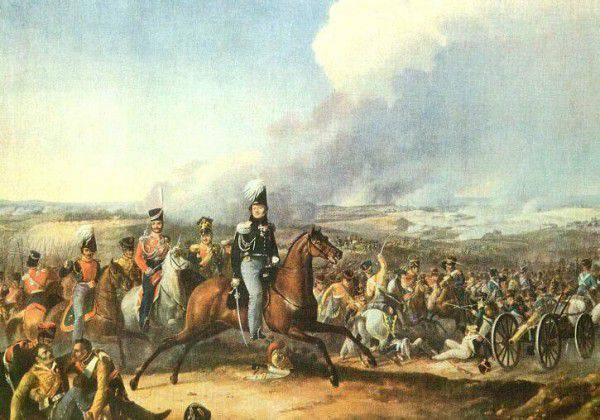 Attack of 1 of General Uvarov's cavalry corps at Borodino. Artist desarno
The Russian army retreated to Gorki and began to prepare for a new battle. It seemed that the battle was going to continue. But in 12 hours of the night Kutuzov canceled preparations for a new battle. The commander-in-chief, who called the battle of Borodino victorious, decided to withdraw the army for Mozhaisk in order to compensate for the casualties and better prepare for new battles. To wait, waiting for mistakes from Napoleon, who lost communication ...

The French emperor did not feel himself a winner: he understood that the Russian army was not defeated, there were very few prisoners, there was no indiscriminate Russian retreat ...

Let us again turn to the notes of Fedor Glinka:

“The clock went away. Night more and more came into its own. The sun was setting in a red ball without rays. Some sourish, acetic odor spread in the air, perhaps because of a large decomposition of saltpeter and sulfur, and perhaps also from the evaporation of blood!

The smoke thickened and hung over the field. And on this night, half-artificial, half-natural, between the scattered French columns, still moving with drumbeat and music, still deploying their red banners, suddenly (and this was the last time) the ground rang under the hooves of the rushing cavalry. 20 000 sabers and broadswords crossed in different places of the field. Sparks fell like a fire, and faded away like the lives of thousands who died in the battle.

This slashing, renewed for a minute, was the last flash of a burned out fire extinguished with blood. This is the King of Neapolitan rushed with his cavalry to the Russian line. But the day was gone, and the battle subsided. The great question: “Who won?” Remained unresolved. ”

In the next chapter of his narrative, Glinka will answer this question: for the winter, the shamed remnants of the Great Army left Russia. Least of all they looked like winners. The answer to this question and history.