Sky Keys and Electricity in the Arctic


The Aviation and Space Salon, which took place in August in Zhukovsky near Moscow, attracted close attention of not only specialists, but also the general public. The predictions given in the media that in the current international situation the exposition will be scanty were justified exactly the opposite.

In particular, on the so-called days for specialists, the European aircraft giant "Airbus" showed its most modern wide-body long-range liner with a composite wing A-350. Large expositions (though without “living” airplanes) were held by competitors of European aircraft manufacturers - the American Boeing and the Brazilian Embraer. South African firm Denel presented the latest developments in the field of unmanned aviation, rocket science, etc.

The eminent Russian and foreign participants of the Moscow Aviation and Space Salon can be listed for a long time, and yet the closest attention of both experts and journalists was drawn to the stands of the enterprises of the High-Precision Complexes Holding.

Show in a fighting position

“High-precision complexes” perfectly performed “homework”, not only presented various models of their products at the joint stand, but also prepared an excellent static exposition.

“Using a GTA, a tank, without spending its lifespan and fuel, without unmasking its positions, can be in a shelter or ambush for about a day”
The first thing that caught the eye of all those who approached the C-1 pavilion was the nearby complexes: the Pantsir-C1 anti-aircraft missile-gun, the Kornet-EM anti-tank missile. Both cars - in the so-called martial position.

Both the unique high-speed anti-aircraft guns and launchers of anti-aircraft guided missiles were deployed on the yellow, “desert” color of the Pantsir (according to NATO classification - Greyhound, “Hound”). Radar and optoelectronic stations were in the working position.

On the roof of a Tigr armored car, camouflaged and specially modified for the installation of the Kornet armored car, everyone could see the PU raised from a special compartment in the back of the PU machine with anti-tank missiles placed in them in special containers. 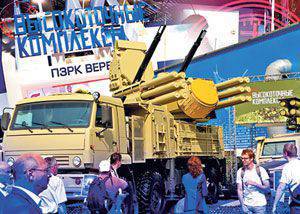 During the exhibition, the calculation of this anti-tank missile system developed by the Tula Instrument Design Bureau has shown more than once how in a matter of seconds, the Cornet turns from a combat position into a traveling one.

At the stand itself in the С-1 pavilion, in the section of the Kolomna engineering design bureau, the Verba portable anti-aircraft missile system was presented. All those who wished could not only take into their hands this MANPADS recently adopted by the Russian army, but also try to take a fighting position with it, familiarize themselves with the command and control. Simply put - to feel like a real operator "Verba".

“It only seems to raise MANPADS, try on it, flip it with switches — such an attraction for adults. In fact, we estimate how convenient it is for the operator to work with Verba. If he gets tired quickly, his attention falls, which means that even with good target designation, it will not be possible to take an enemy plane or helicopter to escort and then shoot him down. In the heat of battle, it takes only a few seconds, and what will happen if the operator mixes the switches ?! ”- a representative of a foreign military delegation, who wished to remain anonymous, shared his impressions with the“ Military-Industrial Courier ”. From the point of view of ergonomics, operator comfort, he liked the newest Russian MANPADS very much.

In addition to such well-known developers and manufacturers of weapons and military equipment, such as the Tula Instrument Design Bureau and Kolomna Engineering Machinery Bureau, the Moscow Central Research Institute of Automation and Hydraulics (TsNIIAG), known only to a narrow circle of specialists, took part in the exposition of the High-Precision Complexes holding. He, as indicated in official documents, occupies a leading position in the development of high-precision guidance and control systems weapons. At the Moscow Aviation and Space Salon, the enterprise presented the most important elements of the Iskander tactical missile system - the point of receiving information (PIP) and the command and control vehicle (KSHM). Anyone could see a video of what tasks these units perform in a combat situation. After the enemy is detected by means of reconnaissance, including species, radar, space, the data and coordinates of the targets are sent to the PIP, from where, after processing, are transmitted via radio channels in the VHF range to the command and staff vehicles. The range of information exchange between PPI and KSHM can be tens of kilometers. A command to the launchers is transmitted to an even greater distance. In the HF range is several hundred kilometers.

Next to the TsNIIAG, SKB Turbina, located in Chelyabinsk, represented its products. The Special Design Office is the only developer and manufacturer of small-sized gas turbine engines and power units in Russia and the near abroad.

What is GTA for? When the main engine is off, it provides electricity to all electronic systems of combat vehicles. And the power unit is able to do this in the temperature range from -50 to + 50 degrees over 20 hours. In fact, using a GTA, a tank, without spending its lifespan and fuel, without unmasking its positions, can be in shelter or ambush for about a day. The power unit also helps to charge the batteries and start the main engine, even in very cold weather.

At the heart of the GTA is the turbine, which turns the generator, which supplies a constant electric current to the onboard network of the combat vehicle. Moreover, the units operate not only on ordinary diesel fuel, but also on gasoline and even, surprisingly, on kerosene.

For installation on the developed models of military equipment, serial GTAs have been selected, which have undergone a deep revision associated with the high saturation of the newest tank with various electronics.

As the Turbins specialists have explained, MSTU is a promising, proactive development of a design bureau designed to provide customers with uninterrupted power supply in difficult conditions of low temperatures, in particular when working in the Arctic. So, in July of this year, the installation immediately attracted the attention of companies engaged in oil and gas production at the Moscow exhibition “Oil and Gas”. A large number of deposits are located in regions with a difficult climate, so it is not surprising that the fishermen became interested in the installation capable of providing stable and uninterrupted power supply.

Works on MSTU are being completed, SKB is planning to bring it to market in 2016, the order book for this unique installation is already being formed. According to representatives of the design bureau, it is planned to release a whole line of gas turbine power plants of various capacities.

Currently, the American corporation CAPstone is promoting similar products on the world market, but the special design bureau Turbina will undoubtedly be able to squeeze out competitors in the domestic, and possibly in the world market. By the way, the installation is going entirely from domestic components, including all electronics.

In extremely cold conditions, due to the use of a natural gas turbine, the APA-18 airfield launcher also operates on natural gas. It surpasses the closest competitors not only in limiting temperatures of use, but also in output power.

Work on the small TD-30 is ongoing. One of the applications of the engine - unmanned aircraft. According to representatives of the special design bureau Turbina, at the request of the customer it can be finalized for both return aircrafts (LA) and disposable aircraft. Currently, the engine is able to lift into the air LA weighing several hundred kilograms for several hours.

Ctrl Enter
Noticed oshЫbku Highlight text and press. Ctrl + Enter
We are
High precision robotsSpace landing
11 comments
Information
Dear reader, to leave comments on the publication, you must to register.