12 September 2015
8
The fundamentals of the use of atomic, heavy rocket and rocket artillery were determined at the 1956 training of the year.


The rapid development and introduction of nuclear to the artillery of the Ground Forces weapons led to a fundamental change in the theory of its combat use.

Already at the end of the 50-s, in the operational and tactical level, barreled, rocket and rocket systems with different firing ranges (launch) were developed and put into service, adapted to ammunition in both special and conventional equipment. 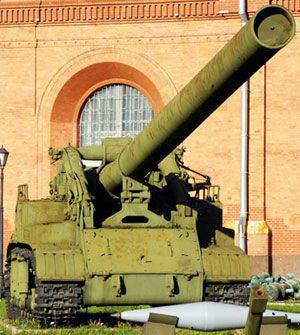 Barrel artillery was represented by artillery systems, 406-mm 2-3 self-propelled guns and 420-mm 2B1 self-propelled mortars specially designed for the use of nuclear ammunition. Included in the artillery regiment of a special power reserve of the High Command, they received a proper name - atomic artillery.

The priority in the development of methods for the combat use of systems adapted for YaB belonged to the United States. After testing 1953-mm atomic guns at the Nevada test site in 280, the Americans gained invaluable experience, having been ahead of the USSR in this area for several years.

According to the views of the US command, atomic artillery and unguided short-range ballistic missiles (BDB) were a powerful means of supporting troops both in the offensive and in the defense. In battle, they were planned to assign those tasks that could not be quickly and effectively solved by conventional fire weapons. In the offensive, the nuclear artillery battalions and batteries of the BRBD performed the following tasks: conducting nuclear training, suppressing reserves in the depth of the enemy’s defenses, and conducting a counter-battery struggle. In addition, it was thought that tactical means of a nuclear attack could be used to perform other tasks arising during the course of a battle, but firing on the prohibition of advancement and deployment was considered extremely ineffective. In defense, the tasks of tactical nuclear weapons looked somewhat different. Divisions of atomic artillery and BDB were to conduct atomic counter-training, participate in the support of counterattacking troops, cover the withdrawal of forces, etc.

From year to year, the threat of the use of US nuclear weapons has become more and more real. This forced the USSR to take retaliatory measures.

The first military exercises with real use of nuclear weapons were conducted in 1954-m at Totsky training ground, and in 1956-m - near Semipalatinsk. In both cases, a bomber was used as the delivery vehicle for YAB. And in the beginning of 60-x on Novaya Zemlya, exercises were conducted with testing of the 8-11 OTRK system.

In 1956, an experimental exercise took place in Odessa VO, during which two basic questions were worked out on the organization and conduct of an army offensive operation in the conditions of use of nuclear weapons. In addition, the tasks of planning and combat use of atomic, heavy reactive and rocket artillery were solved for the first time.

Field Army, which operated in the direction of the front of the main attack, in addition to conventional forces and resources were assigned to a special power division RVGK, armed with which consisted of atomic artillery systems (three 2A3 guns and three mortars 2B1), and Division of unguided rockets (12 PU 2K5). The RVGK engineering brigade conducted military operations in the offensive zone of the army.

The teachings showed that the compounds and parts of atomic, heavy rocket and rocket artillery should be used to perform the following tasks:

- destruction of the enemy’s nuclear attack tactical means, storage depots and atomic weapon assembly workshops,
- fighting with artillery and radar tools,
- suppression of manpower and fire weapons located in defensive positions,
-determination of reserves in areas of concentration during the process of advancement and deployment,
-conducting counterattack (counterblow),
-destruction aviation enemy at airfields,
- violation of troop control and rear work.


The main targets for the atomic and heavy rocket artillery were the atomic attack and artillery of the enemy, manpower and fire weapons in the battalion defense areas and company strong points, division reserves, command posts of the first echelon divisions, radar stations, counterattacking and counter-attack groups.

The most typical for rocket artillery were the tasks of destroying short-range and medium-range radar weapons located deep in warehouses and bases for assembling atomic ammunition, suppressing operational reserves in areas of concentration and loading and unloading sites, command posts of operational associations, and destroying railway hubs and supply stations, sea ​​ports and other objects of the enemy’s operational rear.

The teachings led to the conclusion that atomic artillery has the greatest accuracy, but a relatively short range. A significant advantage of nuclear artillery over heavy rocket and rocket was that it took less time to prepare for opening fire.

As a result, the fundamentals of the combat use of atomic, heavy rocket and rocket artillery in the offensive operations of the army were determined, the tasks for nuclear weapons were clarified, typical targets for nuclear strikes were determined, recommendations on the choice of charge power for hitting targets were developed, common approaches to combat planning were developed I WOULD.

The above-described systems in service with the MTA of the Ground Forces are long gone. More than twenty years ago, tactical nuclear weapons with no response from the United States were withdrawn from the territory of Belarus, Ukraine and Kazakhstan. Nuclear artillery shells are disposed of, and nuclear combat units (TAC) for tactical missiles (this is a third generation fuel dispenser) are mothballed in Russia.

Formally, the United States and the United Kingdom announced the cessation of the use of short-range ballistic and cruise missiles with YABCh, as well as artillery shells in special equipment. At the beginning of the 90-s, these munitions were exported to the Americas, but since they did not fit under any of the treaties, they most likely were not eliminated.

US disposal of medium-range missiles was a kind of fiction. It is known that a certain amount of ABM from MGM-31C "Pershing-2" was adapted for other carriers: of them, bombs were made in special equipment that can be used by both strategic and tactical aircraft. Currently, the United States has a significant arsenal of such nuclear bombs. More than 400 of them are on eight air bases in six European NATO countries: Belgium, Great Britain, Germany, Italy, the Netherlands, and Turkey. On the basis of a special agreement “on the division of nuclear responsibility”, the Pentagon not only stores its tactical nuclear weapons in Europe, but also conducts exercises with national air forces on delivering air strikes with these ammunition. This fact is a gross violation of the Treaty on the Non-Proliferation of Nuclear Weapons, which the United States and its allies practically ignore.

We are in Yandex Zen
Nuclear era. Part 10
Nuclear landing
8 comments
Information
Dear reader, to leave comments on the publication, you must to register.