Negros in a cage

21 September 2015
13
It is now our century of transcontinental communications, when the Internet and TV allow you to see at least the crater of a volcano, even the panties of a movie star - please, everything is in real time. It is also the case with the goods: where you want from there and ordered, where you want and what you want, bought, and in order, for example, to buy the same pineapple or coffee you don’t even have to go far. And what happened earlier, at the beginning of the century? Yes, then the same pineapples were sold even in my blessed Penza. He was on the main street of the city - Moscow street shop "colonial goods". The only one for the whole city and the prices in it were - oh-oh! Do you want to see how people live abroad - buy the magazine "Around the World" or go to the cinema. The famous Pate Journal (he sees everything, he knows everything!) Could only show you a burning house in the center of Paris and the Zouaves marching along the Champs Elysées, armadillos on Speedhey raid, and even diamond mining in Kimberley. Well, and if you were already a very advanced person, then ... you could attend many exhibitions, both in Russia and abroad. 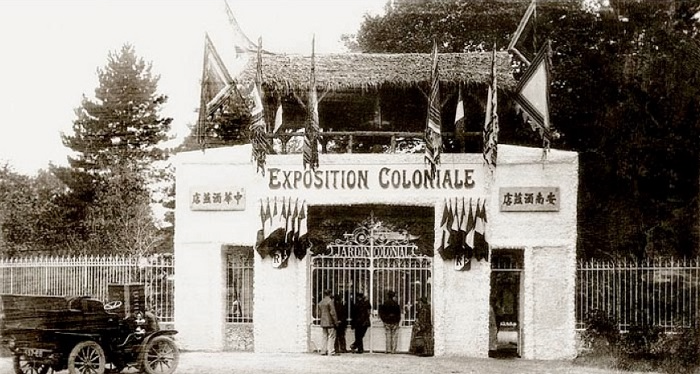 Entrance to the exhibition of the colonial economy in Paris.

In general, the impression is that the exhibition then held even more often than they are held now. In any case, this impression is created by viewing the magazine "Niva". For example - since we are talking about colonial goods, in Paris in 1906, even an impressive exhibition of the achievements of ... the colonial economy was held. That is how it was at that time. And that there just was not: bags of coffee grains, palm oil, nuts and figs, bananas and copper ingots, elephant tusks and leopard skins. However, the highlight of the exhibition program was a demonstration of live Negroes from the French colonies. Yes, yes, just 7 years before the beginning of the First World War, when people in Europe were already, in general, quite civilized, from Africa were taken and brought to a specially equipped zoo ... blacks. However, this is not so surprising, because the demonstration of representatives of "primitive peoples" in menageries was at that time the most common thing, and to anyone in Europe, even at the beginning of the 1930-s, did not seem terrible.

And during the year the 1 million people visited the exhibition with blacks in Paris, that is, you imagine how interesting it was for people then: to see live Negroes in cages! And there were not five or ten, but 300 people there. True, out of this number, 27 people died from different illnesses for the year (but mainly from a cold). 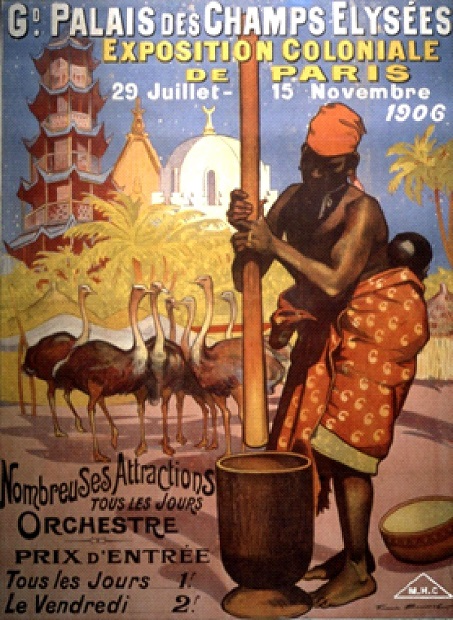 Advertising of the colonial exhibition in Paris.

And it should be noted that not only in countries that have colonies, but also in the same, for example, Switzerland, they did not see anything wrong in keeping Negroes in the local menageries. If you belong to a primitive people, then all the desires and feelings you should also be very primitive, and if so, then ... here's a cage for you, sit in it and rejoice that you are full. School teachers took their students to look at these "backward people" and clearly show how people of one race differ from another, to demonstrate their behavior and activities. Scientists, in turn, were engaged in experiments on the acclimatization of blacks and their accustoming to the cold northern climate. Well, linguists and ethnographers also had their own interests in all this. After all, not all researchers had the money to repeat Dr. Livingstone's travels and visit Africa in the early 20th century, but it turned out that the government took care of them, and if you cannot go to the Negroes, then the Negroes were brought to you. 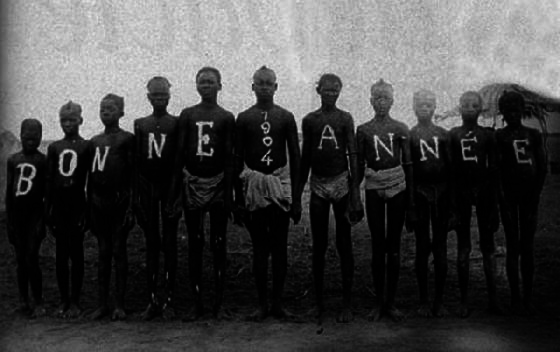 Do not think that blacks in European zoos were ill-treated, not at all. They were well fed, tried to treat them kindly, carried out regular medical examinations, and when they were ill they were treated! The tenure in the cage usually lasted no more than two years, and only the pygmies, who were very difficult to reach in Africa, were delayed longer. So that the negroes would not be bored and that picturesqueness for their sake would be placed in open-air cages with such animals as monkeys, zebras, ostriches, etc. That is, visitors admired the "savages" in the photo of the inherent wildlife! Were in European zoos and natives of India, Southeast Asia and Oceania. So the scene shown in the Soviet film “Maclay” (1947) could well be, although everything was in reality and not so dramatic. Well, in the 1947 year, our cinematographers simply could not help but add fuel to the fire of Soviet xenophobia, but, in fact, they showed what it was! 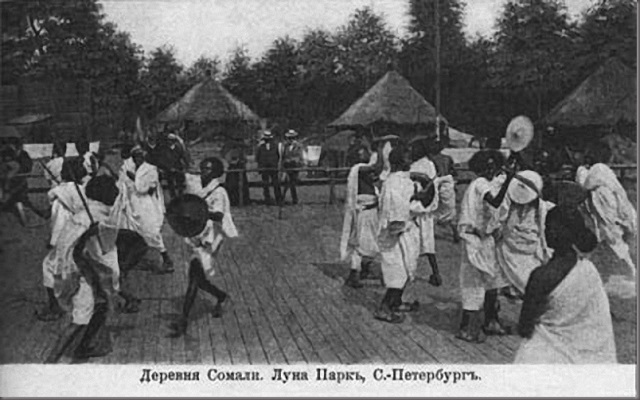 “Somalia Village” was the name of the “Blacks” demonstration site in Luna Park in St. Petersburg.

Interestingly, in 1908, blacks were brought to the menagerie and to St. Petersburg, and no one was indignant about this: neither the progressive public, nor the students, nor even the left press!

Well, why such zoos began to close? Has humanism developed? No, it was just that the 1929 crisis of the year began, which hit the United States and Europe painfully. To keep such menageries was not a cheap thing, and the common people did not have the money to visit them. So they began to close in large quantities. It is not by chance that they existed for the longest time in such prosperous countries as Switzerland and Sweden - their crisis affected the least. Only in 1935 - 1936. in Europe, the last blacks in zoos in Basel and Turin were eliminated. 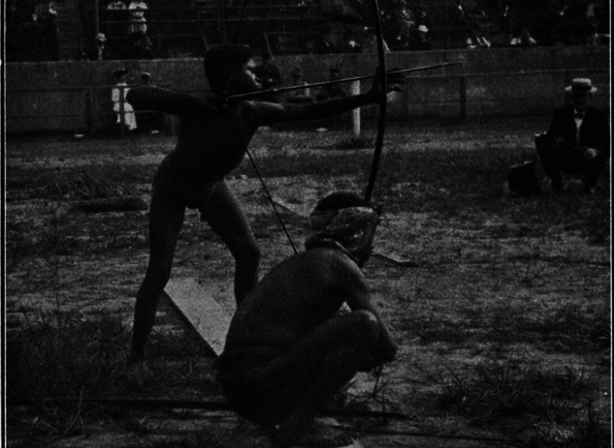 Nowadays, the Parisian zoo, where the living Negroes were once shown, is abandoned. The buildings on its territory are being destroyed, everything is overgrown with forests. And now the city hall of Paris decided to allocate 6,5 million euros in order to equip this place as an ordinary park. But the local public was suddenly indignant with this: “Ah, it was a terrible time of colonialism, why should we remind about it ?!” That is, let it be said that everything here remains as it is! Changes that can disturb public memory are not desirable. In the Paris mayor’s office they thought and decided “not to aggravate” ... 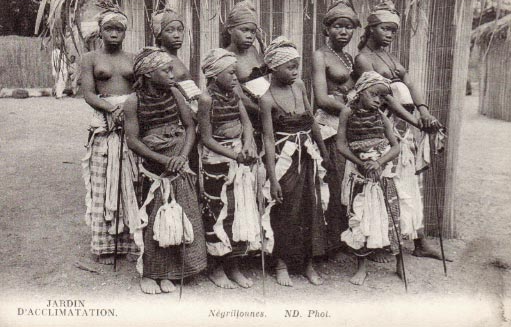 It was very interesting to see the Europeans at these "beauties"!

So the West is now ashamed of its past, even if it is a past that took place a century ago. That is, tolerance and multiculturalism are triumphant in Europe today, and if you are even striped, like a zebra, you will not be put in a cage.

But for some reason in the West, no one is outraged by the zoo with the aborigines of the Andaman Islands belonging to the Negroid race that has survived to this day. The government of India decided to preserve the life of the local natives there in its original form, especially since it is a unique ethnic group - “Indian negros”. They are of small growth - remember the story “The Treasure of Agra” by Conan Doyle, where one local aborigine nearly shot Sherlock Holmes with the poison arrow of their air pipe. And I must say that their civilization has not particularly touched them up to the present.

Moreover, the Indian authorities are categorically opposed to the fact that the natives were civilizing, wearing European clothes, using the means of technology, learning and treating. But all this would be nothing if their habitat would not be enclosed with wire, beyond which the natives are forbidden. But on the zoo paved roads, and tourists, sitting in cars, can watch the primitive life of "savages." Tourists are not allowed to feed them, but they still learned to beg them for their favorite treats - bananas and wheat bread. London travel agencies sell vouchers there, and in them it is written - Human Zoo (People’s Zoo). Again double standards, right?

We are in Yandex Zen
My grandfather's front-line letters (part 2)
Legendary Zouaves: Franco-Algerian "special forces"
13 comments
Information
Dear reader, to leave comments on the publication, you must to register.