10 September 2015
125
Which year already the Russian Orthodox Church is under the constant care of the media. Hordes of bloggers, who, without letting the candle out of their hands, keep a close watch on the patriarch’s watch, the patriarchal cross and, of course, the patriarchal ryasa, all of a sudden where a smartphone or tablet appears, does not lag behind them. At the same time, all these fighters of the keyboard and mouse are surprisingly often united in well-known political views. They also surprisingly often compensate for their own lack of professionalism with eloquent provocative information about the attacks on the church. As they say, we live like this, diligently pretending, as if we had no idea that in a modern impersonal network environment, an Orthodox activist might even call himself a Wahhabi, shahidically girded, even a Yakut shaman with a tambourine. They are equally trying not to notice the work of the competent authorities, without going into the details of the investigation.


After vandalism on Lakhtinskaya in St. Petersburg, inspired by a new excuse to declare about their own existence, the ranks of a specifically-minded public, spurred by a noble idea to protect Peter’s famous and unique cultural heritage, were drawn to the new opposition Mecca. At the same time, it, this very legacy, turned out to be so “famous and unique” that there were no drawings, models, or even information about the material from which the so-called Mephistopheles was made. Moreover, the well-known Petersburg translator, writer and publicist Dmitry Puchkov in Novosibirsk admitted that he did not even know about the existence of such a remarkable bas-relief, although he had lived in St. Petersburg for several decades. 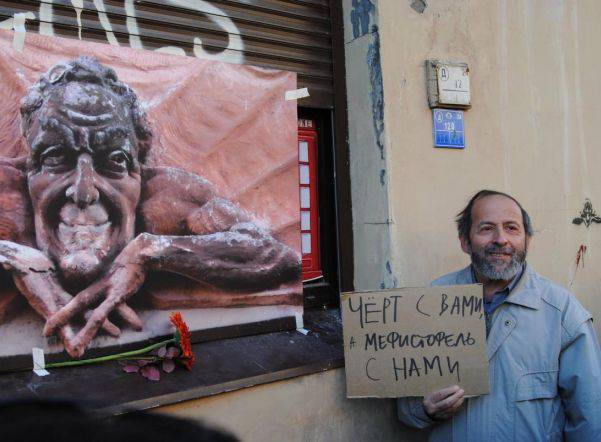 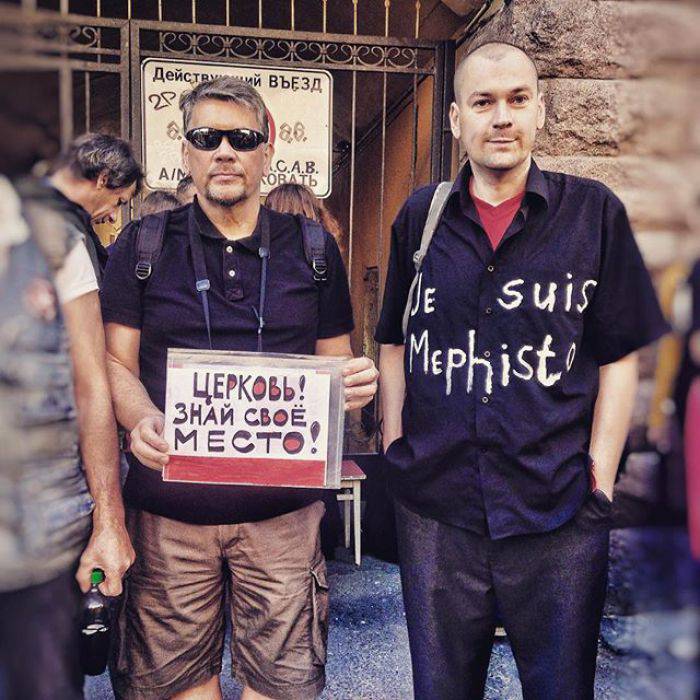 The extremely colorful audience gathered at Lakhtinskaya radiated sincere childish joy from the attention given. However, all attempts to drive away the keen sense of deja vu were unsuccessful. Indeed, phony-wise phrases and hashtags went into action. If it were not for the deep, so to speak, strategic goals (which will be discussed below), this is a gathering that actively protects the cultural heritage against the background of ugly graffiti, peeling plaster and general wretchedness of the facade, protected by the crowd of the building, on the walls of which they managed to stick scotch quickly the bungled banner with “Mephistopheles,” looked like a caricature of themselves. And God sees that after this seething in the oppositional cranial boxes, the next furious pictures with armored arch-artesters and amphibious diaks, prowling across Russia in search of the next bas-reliefs, are already looming. And judging by the slogans of these dull “defenders”, they, in fact, don't care whether a vandal will be punished or not. They are fanatically passionate about narcissism.

So why is Orthodoxy a target? Who will remove populist cream from scandalous shares?

A few strokes to the portrait of Russian Orthodoxy

Whether you like it or not, whether you believe in God or you are an atheist, the fact remains. The Russian Orthodox Church is one of the oldest social institutions in modern Russia, with more than 1000 years stories. It goes without saying that during such a long history it was impossible to avoid the fact that Orthodoxy does not penetrate so deeply into Russian antiquity and statehood, and Russian antiquity and statehood into Orthodoxy, which is sometimes difficult to understand where one ends and the other begins. In fact, Orthodoxy is one of the foundations of Russia. Both Dmitry Donskoy and Alexander Nevsky understood this spiritual patriotic charge, but there is no need to go so far if there are examples closer to our time, while perhaps even more vivid.

22 June 1941, immediately after the declaration of war, the Patriarchal Locum Tenens, Metropolitan of Moscow and Kolomna, Sergius, wrote the “Message to the Pastors of the Christian Orthodox Church” (I quote in abbreviation):

“In recent years, we, the people of Russia, have comforted ourselves with the hope that the military fire that has engulfed almost the whole world will not affect our country. But fascism, which recognizes only bare force by law and is accustomed to sneering at the high demands of honor and morality, turned out to be true to itself this time too. Fascist robbers attacked our homeland ...

But not for the first time, the Russian people have to endure such tests ...

Our ancestors did not lose heart and in a worse situation, because they remembered not about personal benefits and dangers, but about the sacred duty to the Motherland and faith and came out victorious.

We will not shame their glorious name, and we are Orthodox, our own in flesh and faith. ”

3 July 1941, Joseph Vissarionovich Stalin spoke as he didn’t say before, didn’t speak with bureaucratic “comrades, citizens”, but spoke differently: “brothers and sisters”. As Mr. Kiselev says: “Coincidence? I do not think.

And on September 4, 1943, Stalin personally met with the three metropolitans of the Russian Orthodox Church. During the conversation, Stalin approved the convocation of the Council of Bishops for the election of the patriarch and the creation of a synod. Moreover, he authorized the publication of the journal of the Moscow Patriarchate and offered government support (transport, food, etc.). But the irony of this meeting was Stalin’s proposal to provide the church with a mansion in Chisty Lane, previously occupied by German ambassador Schulenburg. And this is after many years of persecution of the church, which is no secret.

However, words are words, but what about the deed? In fact, the country received not only material (fees, received by the defense fund from church parishes, numbered in the millions) and spiritual support, but also an extensive intelligence network behind enemy lines, channels for providing food for partisan detachments, etc. Here is just a short list of those who forged the Great Victory, being in a cassock:

Priest Boris Kirik from the Baranavichy region (a paramedic by training) dug a huge cellar under the floor of the church house and set up a hospital for partisans there.

Nikolai Khaltov, a priest of the same area, also organized a hospital for partisans and helped them with the Brigade reconnaissance team. Chapaeva. In 1944, he was arrested with his brother for contacting the partisans. Fate is unknown.

Priest Nikolai Pyzhevich (Rivne region) helped partisans with medicines, distributed seriously wounded people in the homes of his loyal people, and distributed Soviet leaflets and reports from the front to the population. For this, his and his entire family (wife and five daughters) punitive burned alive in his own house.

The superior of the Vidon church in Utorgosh district, Methodius Belov, not only collected funds in the occupied territory for the defense fund, which were then shipped to Moscow, but also conducted intelligence in the rear of the enemy. He was tortured in the dungeons of the Gestapo.

Archpriest Ivan Rozhanovich not only participated in the partisan movement, but also organized meetings of underground fighters with partisans. Being engaged in underground activities, he managed to liberate 15 partisans and inclined a detachment of Cossacks from the ROA to go over to the side of the Red Army.

The priest Fyodor Dmitrik served as a liaison for the Belarusian partisans. For this, the punishers exterminated his entire family, only his daughter was saved.

Vladimir Sokolov from the village of Mandush in the Bakhchisarai district not only worked closely with the partisans, but also distributed Soviet newspapers to the public. The Germans burned down his house, but he himself was saved by continuing the partisan struggle.

Archpriest Vasily Braga worked with Soviet foreign intelligence, obtained valuable information about the movement of the enemy and helped the partisans with provisions.

Priest Petranovsky in Odessa organized an underground group to conduct intelligence and disseminate information to the Soviet Information Bureau, which he received on a radio receiver hidden in the basement. Saved more than a hundred Jewish children by issuing documents of baptism.

Father Marian from the village of Guta-Stepanskaya of the Rivne region personally led the self-defense detachment, having established contact with the partisans.

Archpriest Alexander Romanushko himself joined the partisan detachment, participated in the battles, went into reconnaissance. 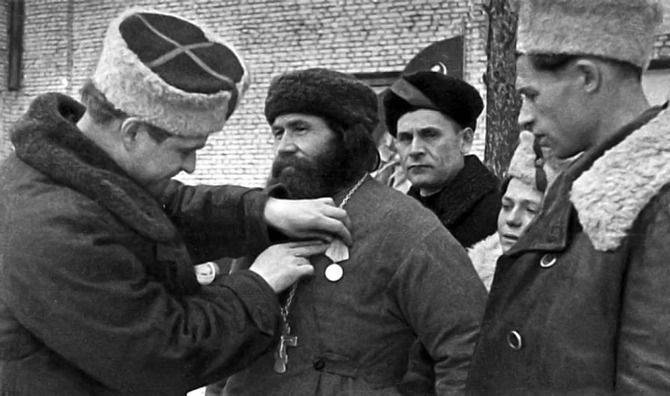 And this, I remind you, is only a tiny part of the names. Names in which one cannot find the names of hundreds of priests who made every effort to defeat the Red Army on our side of the front. There are no names of blockade priests there either. Eight representatives of the G-20 (elective board of the church) of the Prince-Vladimir Cathedral died of starvation and bombing, including the chairman. Eight out of twenty. In the entire Leningrad region of the 50-ti priests died of hunger 20 people.

Joseph Vissarionovich as a former seminarian was well aware of the inspirational vector of the movement of the Russian Orthodox Church, its ability to unite people in the face of a foreign threat.

Repetition of the past, or Who did the opposition learn?

Over the past couple of years, the domestic opposition movement has revealed itself with might and main. Lia Akhedzhakova alone didn’t receive a heartfelt blow, admiringly admiring the tent bomber amid the burning Maidanov tires. Passionate envy of the more resourceful Ukrainian "democrats" swept the entire opposition community. And it became clear even politically deaf. Give maidan, period. Well, and all the ensuing consequences. That is, the pro-American puppet regime, the complete disregard of the people as a geopolitical and ethnic unit of world history, and so on and so forth.

And then it began - on the same sites the communists were reproached for oppressing the church, and the church “invaded” social life, criticized the weak (in fact) education system, and immediately broadcast the “democratic” right to be stupid. In short, everything is done to set people off, to prepare the ground, because one fall in the ruble exchange rate is not enough, and it was not experienced. But here's a bad luck: if on the fertile soil on Maidana of Ukraine, the crooked Uniate Church has long been growing and the UOC was feeding in half with sin, then in Russia the Russian Orthodox Church stands steadily for thousands of years. There was only one way out - to oppose the flock of shepherds, kindle distrust, split the center of unity.

But in this they were not original. Just walked along the beaten track. Adik, to the stage! And do not pour resin on the floor! Speak faster - the boiler gets cold.

“It would be in our interests to be in such a position that each village would have its own sect, where their own special ideas about God would develop. Even if, in this case, shamanistic cults arise in some villages, like Negro or American-Indian, then we could only welcome it, because it would only increase the number of factors crushing Russian space into small units ”(Adolf Hitler).

Well done, climb into the cauldron, and then devils coal is in vain transferred.

Does the ROC have a problem? Of course have. There are no problems only with Mormons and with Jehovah's Witnesses. And it's not the patriarch's watch - it's just a populist duck, everything is much more serious. But to solve the problems of the church should the church itself from the inside. Maybe you should not treat a headache, cutting off the head, as many wish it?

Ctrl Enter
Noticed oshЫbku Highlight text and press. Ctrl + Enter
We are
War of Monuments. Orthodox Front: Passions in the Sea Cathedral (part 2)Dances with a tambourine around Iran, or Arab-Israeli circus on horseback
125 comments
Information
Dear reader, to leave comments on the publication, you must to register.