9 September 2015
18
Transportation of military equipment over long distances is a rather complicated task, which requires special equipment and the attraction of other equipment. Not all types of combat vehicles have the opportunity to get to the desired area under their own power, which is why they have to be transported using special vehicles. For this purpose, railway transport and tractors with special semi-trailers for armored vehicles are used. A few years ago, a new tractor appeared, which can also be used to transport armored vehicles. The Ural-63407 truck tractor is offered as a promising vehicle for the transportation of military equipment and other goods.


The new tractor Ural-63407 is an all-wheel drive vehicle adapted for towing semi-trailers with different loads. The machine was built on the basis of the chassis Ural-6370-1151, long mastered in the production and operation, which, as expected, was to provide her a great future. Due to the use of a powerful engine and a reinforced design, a truck tractor can be used as the main element of a road train with a total weight of more than 76 tons. 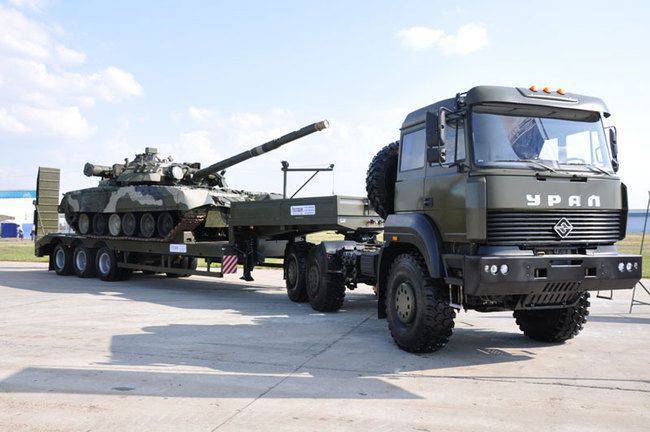 Tractor unit with semitrailer and a tank. Photo by Sdelanounas.ru

Like other cars of its family, the Ural-63704 tractor is built according to a bonnetless scheme with the placement of the driver’s cabin above the engine. The design of the machine has no noticeable differences from its counterparts of the brand “Ural” and other manufacturers. The tractor is built on the basis of a frame of variable width with spars of variable profile in height, on which all main units are mounted. In the front of the frame provides space for the installation of the engine and transmission units. In the same place the cabin fastens. In the central part of the frame, on the left side, is the fuel tank on the 500 l.

The high performance of the tractor is provided by a YMZ-650 turbocharged diesel engine with an HP 412 power. According to reports, depending on the wishes of the customer, the machine can receive other types of motors with similar characteristics. To operate the machine in difficult conditions, the power plant is equipped with a pre-start liquid heater.

16-speed manual gearbox ZF 16S2220TD is directly connected to the engine. After the gearbox, torque is transmitted to the mechanical two-stage transfer box ZF VG2000, which includes a cylindrical locking center differential. Having a wheel formula 6х6, the Ural-63704 machine is equipped with three driving axles RABA MAXS with a spaced main gear and locking the wheel differential. In addition, on the middle bridge provides locking center differential. As part of the chassis has a three-circuit air brake system with ABS function.

The tractor is equipped with 11,25x20 wheels with 16.00R20 tires. There is a tire pressure control system that improves cross-country performance. As part of this system, there is a set of sensors and automation that can independently determine damage to the wheels and pressure loss, as well as perform pumping.

In the basic configuration, the Ural-63704 truck tractor is equipped with a double cab with a bonnet layout. In the framework of the new project, the cabin ergonomics has been changed and optimized. In the back of the cabin, behind the driver’s seat and accompanying person, there is a berth for rest. The cab is attached to the frame of the machine hinged. For servicing the engine and other units installed in the front of the frame, the cabin leans forward. On the rear wall of the cab there are attachments for transporting a spare wheel.

In the army configuration, intended for the transport of armored vehicles, the tractor can be equipped with an additional cabin installed behind the main one. The rear cabin has one door on the left side and three seats for passengers. To communicate with the driver, the second cabin is equipped with an intercom. There is also an autonomous heater. It is possible to use a filter-ventilation unit. The dimensions of the rear cockpit and the number of seats in it allow the crews of transported armored vehicles to be transported. On the right side of the additional cabin there are attachments for the spare wheel, since after its installation the attachments of the main cabin are blocked and inaccessible.

A fifth wheel hitch is mounted on the frame of the car above the rear carriage. Two versions of this equipment are offered. At the request of the customer, the tractor can be equipped with a device for a king pin with a diameter of 2 or 3,5 inch. In the case of the 2-inch pivot, the fifth-wheel bearing pad is located at an altitude of 1,55 m above the ground. The 3,5-inch version of the device can be 1,55 or 1,885 m in height. In all configurations, the device can swing in the plane of the machine axis. It is allowed to tilt 8 ° forward and backward 7 °.

The total length of the Ural-63704 tractor is 7,74 m, the width is 2,5 m, the height on the roof is slightly less than 4 m. The curb weight of the car is equal to 11,25 t. The total weight is 33,4 t. road trains are declared at the 65 t level with a load on the fifth wheel coupling no more than 76,25 tons. At the same time, the front axle has a load at the level of 22 tons and rear axles - 7,45 tons. If necessary, some increase in the semi-trailer weight device however uchae manufacturer is forced to reduce the resource units.

Due to the powerful engine, the tractor can reach speeds of up to 80 km / h. Power reserve with one refueling 500-liter fuel tank is not specified. 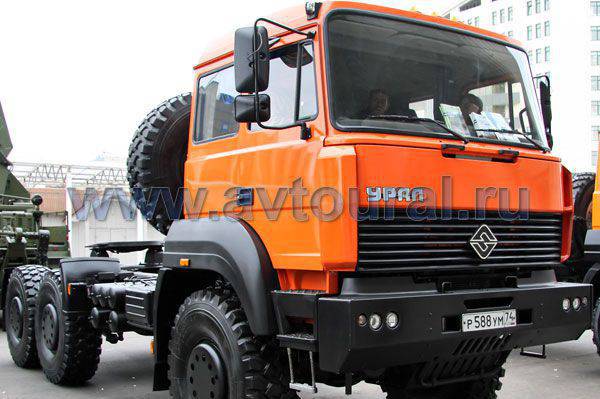 Civilian version of the tractor

The project of the new truck tractor was developed at the end of the last decade, and since then, the models of the Ural-63704 machines regularly participate in various exhibitions. In addition, the technology of this model is offered to potential customers. As part of the exhibitions and showrooms, the manufacturer demonstrates various options for the new tractor. So, a few years ago, for the first time, a military version of the car with two cabins and a tank semi-trailer was shown.

At one of the sites of the Russia Arms Expo-2013 exhibition, a Ural-63704 truck tractor with a semi-trailer was displayed, on which was the main battle tank. In this way, the manufacturer clearly demonstrated the capabilities of the new vehicle as a special vehicle for transporting armored vehicles over long distances. Naturally, the tractor is capable of carrying not only the main tanks, but also other armored vehicles, the weight of which fits into the permissible limits. Thus, the machine may be of interest both for commercial structures and for armed forces.

Detailed photoreview of the tractor in the army configuration:
http://otvaga2004.ru/fotoreportazhi/vystavki-vooruzheniya/tyagach-ural-63704/