9 September 2015
17
The fact that today the events in Ukraine are gaining momentum is noticeable to everyone. There is no day when someone or something does not cause scandal. Moreover, as recent events have shown, on both sides of the confrontation. Everybody knows how to wonder. And we now see this attraction with enviable periodicity. But today I would like to draw the attention of readers to another, probably unexpected side of the situation. 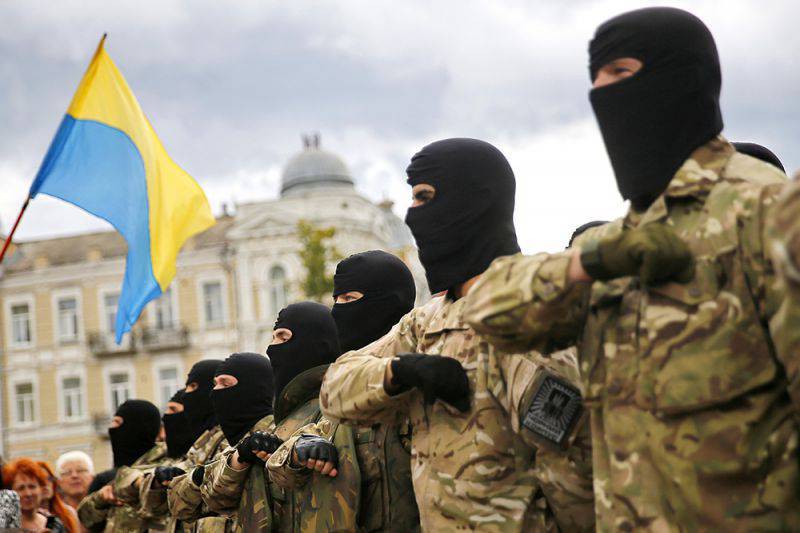 There is no alternative to the Minsk agreements. I would like both of them to be, but alas, no. No strength and desire to continue the war. There is no longer that support from the "sponsors" and curators. And the people of the countries, somehow involved in the Ukrainian events, are tired. We are tired of constant lies, of constant "tightening the belts," of constant requests and subsequent reproaches of "ruinousness."

In short, the Ukrainians began to realize that the "banquet" should be finished. No matter how much the wolf feeds ... and the elephant still has a trunk. No matter how much war, once you have to start and work. But the war brought almost complete loss of jobs in leading industries. Yes, and agriculture can no longer provide enough jobs. The loss of the Russian market, no matter how much the minister of this economy sticks out his chest, is a sensitive blow for producers.

But most importantly, there are thousands of dead among Ukrainians. The same Ukrainians. Soldiers and civilians. At both sides. These dead are not forgotten. Their children, mothers, fathers, wives, husbands are alive. I am writing not only about Donetsk residents. I write about the whole of Ukraine. Even one “hero of the ATO” brought to a village in a zinc coffin makes this village enemies of Donbass.

So, there are two problems that need to be addressed. On the one hand, you need to somehow negotiate and end the war diplomatically. On the other hand, these corpses. Corpses that can not be "silent". The dead, who require vengeance or memory. That in our reality is actually the same thing.

For almost two years we have been reading about the heroic deeds of the militias. And many of them are Russians. There is so much information that the Ukrainian site “Peacemaker” has grown to enormous size. And photos, and addresses, and place of residence. Any information. Remember how many praises "sang" the media Motorola. How many arrows. A lot of people. I am sure that most Russians are well aware of these callsigns.

And on the other hand? Yes, the information was. But it was replicated by the ATO participants themselves in social networks. The media kept a proud silence or informatively reported the presence of volunteers in the Right Sector battalions and other territorial formations. Neither the names nor the addresses of these volunteers are not there. Call signs, that's all.

Again, "Peacemaker" gives complete information about the thousands of militias. But there is no such site from LDNR.

The last example I know was the 33-year-old Belarusian citizen, Brest resident Oles Cherkashin, the call sign “Taras”, who was seriously wounded in the battle near Belokamenka and died without regaining consciousness. Mentioned another volunteer - a citizen of Poland, Leonid Smolinsky.

Why would the Ukrainian media suddenly become so "objective"? Why did they begin to publish names along with the call signs?

It seems to me that now the process of "laundering a dog" begins in Ukraine. Simply put, they are now beginning to look for the perpetrators of most crimes. Well, Ukrainians can not be guilty. In this case, they must be punished. We must judge. And who would agree to such a court?

Any soldier obeys the commander. Commander to another commander, higher and "star-star." And so to the commander in chief. So who should be judged? And who are our commanders? What are these positions they still hold?

But volunteers are quite suitable for the role of scapegoats. In most countries from which they came, there is an article of the Criminal Code for mercenary. And the punishment for this article is quite decent. And the special services of these countries are fully capable of calculating "their" wards. Thus, the road home for them is closed. The trap slammed shut, however, a little earlier. And no one noticed.

Let me remind our former compatriot Masha Gaidar. Well, Mikhail Saakashvili, of course. How long did it take for the leadership of Ukraine to become citizens? Right. To put it mildly, little time was needed. Almost a matter of hours.

And how many volunteers of the Armed Forces of Ukraine received Ukrainian citizenship? Even despite the highest patrons and personal prowess in battles. There were always excuses and reasons why citizenship would be “afterwards”, “someday”, “after victory”.

Returning to the deceased Cherkashin, I will say one more thought. Unexpected for many. Ukrainians are well aware of how the KGB of Belarus works. But they are not sure that Belarusians know all the volunteers. Therefore, they report places where it is necessary to "shake." This is the youth movement Zubr and the Belarusian Christian Democrats (BCD). I think the specialists of Belarus can read not only line by line, but also between the lines.

The question arises: where do Ukrainian myth-makers get information for the same "Peacemaker"? Nobody thought? And in vain. If you turn a little brains, the source will become clear as daylight. There is only one office in the territory of the LDNR, which is able to transmit information about foreign volunteers to colleagues from the SBU. And, apparently, successfully transmits. Otherwise, why such a mass of information on the "Peacemaker"?

The opposing side is not particularly "gone" from the enemy. Recent events in the DPR have shown who and for how much will be "handed over" in which case. The aforementioned Motorola was forced to flee from the DPR MGB. Just run. I think this man’s connections at the top of the DPR have played a role. A good man was found, he warned that they would "take him away."

And what is the result? And in the end we see the preparation for the full "laundering of a dog". In the public consciousness will be actively implemented information that among the volunteers, the majority of the radicals. Most of the “ideological fighters” for whom the struggle is important, and not the life of ordinary Ukrainians. And it is precisely these inadequacies that committed war crimes on the territory of Ukraine. Both on the one and the other.

God forbid to be mistaken, but the facts are pushing precisely to such conclusions.