Tank "Vikkers Medium" - if you really fight, then with comfort 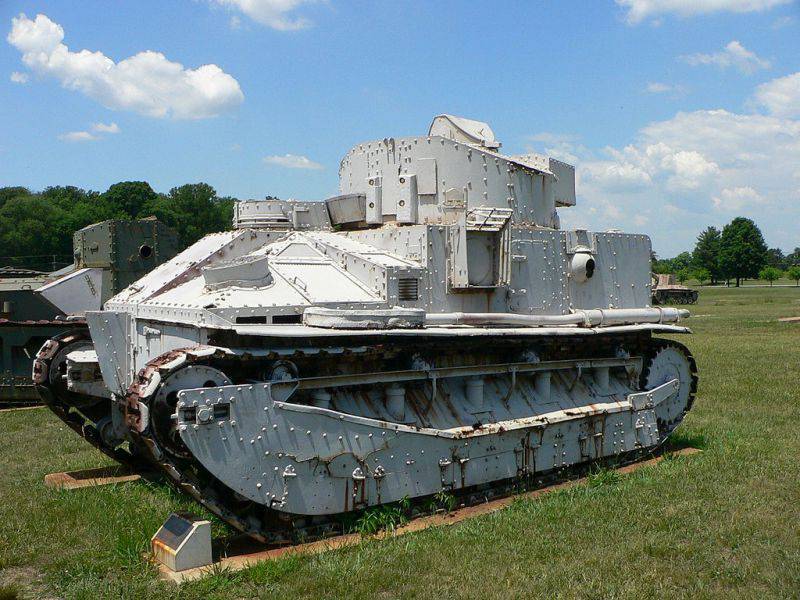 Tank "Vikkers Medium" Mk.IIA in the open area of ​​the Aberdeen Proving Ground in the USA.


Everyone knows that special comfort cannot be expected from military service. So it was, so it is, and probably in the future it will be so too. After all, various restrictions and even deprivations are connected with it, and a military man is obliged to put up with all this or go and look for another job for himself. This is especially related to technology, and everyone understands that in terms of comfort neither a Mercedes nor a tank are incomparable. Of course, it is known, for example, that the British officers in India took with them even field baths, and they drove them on ... elephants! But it is rather an exception to the rule. However were in stories military vehicles are known machines in which the level of amenities provided to the crew was much higher than in others! And one of these machines was the famous medium tank 20 of the twentieth century British "Vikkers-Medium" ... 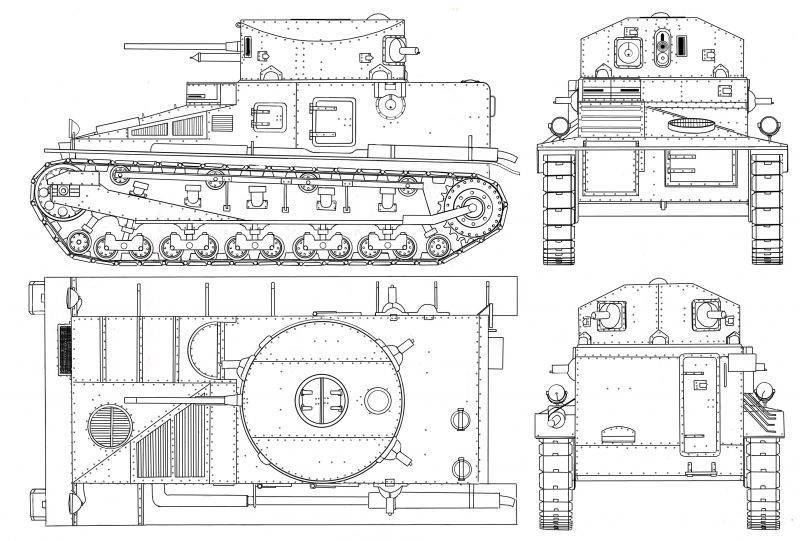 It is well known that serving on the British tanks of the beginning of the century was more than dangerous and, in any case, very difficult. A huge engine, sobering with gasoline, poisoned the air in it, and the heat was coming from him as if it were a Russian stove. It was bad with ventilation, bad with visibility. In addition, lead spray from bullets breaking on the armor often flew into the viewing slots. Tanks it was shaking and tossing, and the noise in them was just hellish. I had to explain to the tankmen that it was even worse to serve in the infantry, that there was armor on the tank, and he ... was driving across the battlefield! Although the designers fully understood that the army would soon need completely different tanks. And for the creation of one such tank in the early 1920s. in England decided to take the company "Vickers" - the largest at that time the national manufacturer weapons. They worked on the project very intensively, so the new tank began to enter the troops as early as 1922. It was called long, but exhaustively: “Medium Vickers Mark I” tank (MKI), and that’s why Vickers Medium and affirmed. They also called him by weight: "Vickers 12-ton." And the most interesting thing is that for ten whole years this tank was the only medium-sized tank adopted by the British Army, whose photographs and drawings bypassed the publications of the whole world. At the same time, he had no more analogs and sequels! 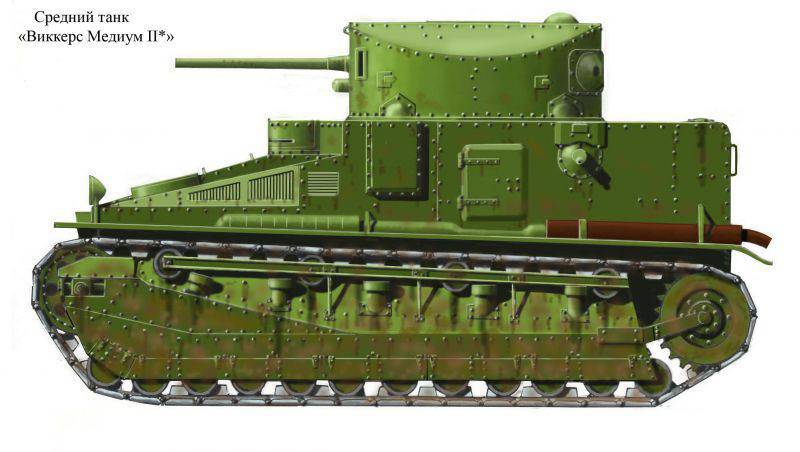 The new tank was marked with a search seal, but for those years it turned out to be quite good, and in some ways it even overtook its time. First of all, compared to previous models, it came out very fast, and could move at speeds up to 26 km / h. But, of course, he made the strongest impression with his weapons. So, in the cylindrical turret there was a long-barreled 47-mm cannon and as many as three machine guns (!) Vickers: one was located next to the gun, and two - in the stern. Two more machine guns were installed on the sides of the hull, and their embrasures were arranged so that one of them could also fire even on planes!

Here is the reservation on it was only 8 - 16 mm, and it is clear that such armor protected only from bullets, but not from projectiles. The designers also understood this. In any case, they tried to increase the armor resistance of the armor of the tower at the expense of the bevels made on it. Initially, there was no commander’s turret on the tank, but then it was also installed, so it can be said that a great deal of attention was paid to the convenience of the crew’s combat work. 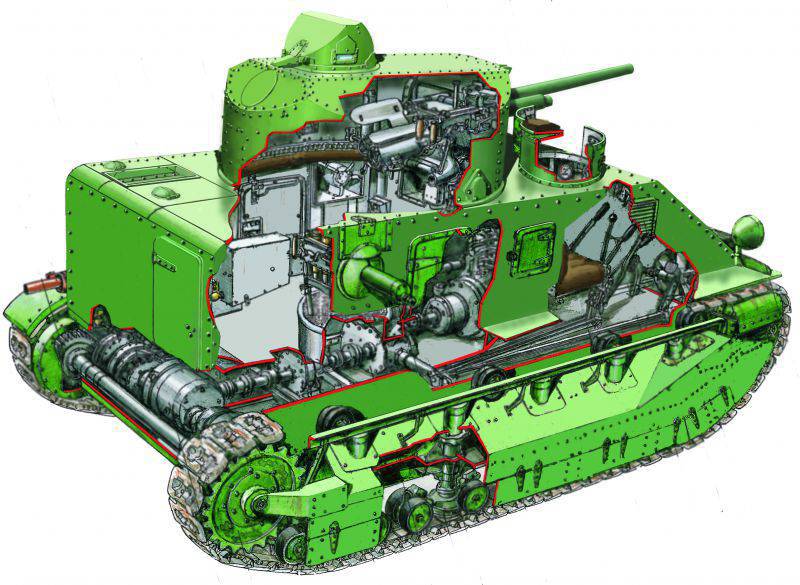 It is interesting and the location of the engine - in contrast to all the then tanks on this machine, he was in front, and separated by a bulkhead from the crew compartment. Moreover, this bulkhead was covered with asbestos, so that the heat from the engine did not disturb the crew. The original technical solution was removable panels on the floor, which immediately made it easier for the crew to access the gearbox and differential, which was very convenient. On the first modifications of this tank, the driver sat so that his head was flush with the upper armor plate of the hull, but then, again to improve his visibility for him, his seat was raised, and a round observation tower was installed above it on the right. 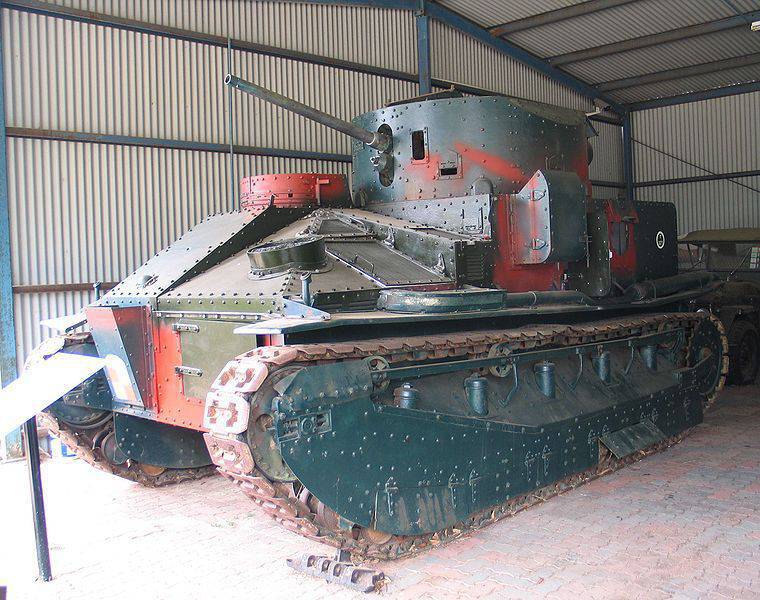 Mk.II in the Australian Tank Museum in Pukkapuhuale.

For the tank, hatches are of great importance. When it burns, few hatches never happen! And on the Vickers, for the convenience of the crew, one large hatch was made on each side of the sides on each side. Well, in the stern he had a real door (a similar technical solution was typical then on English tanks, but here it turned out to be especially convenient). On the sides there were two more small hatches, especially for loading ammunition, which was also not on other machines. 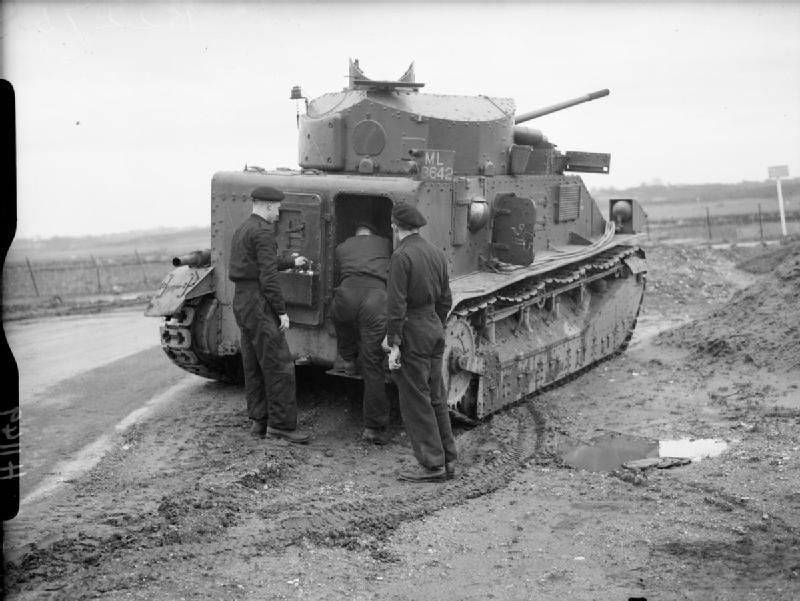 English tankers sit in the tank.

So the conditions in which the five crew members of this tank worked, compared to those in which the crews of other machines worked, were simply comfortable. In addition to good ventilation, there was also a drinking water tank in it, and besides a large water tank, the designers reinforced it outside so that it stood on the exhaust pipe! Therefore, the crew of the Vickers Medium always had a substantial supply of hot water to wash after the “works of the righteous”. That's really concern, you will not say anything, because there is no such thing today, even on the most modern combat vehicles, and there is nothing to say about tanks of the Second World War.

The Vickers I-Mark tanks served as a model for many other tanks, although nowhere, in any country in the world, were they copied completely. In the USSR, along with the Cardin-Loyd wedge, it was usually painted in textbooks on armored vehicles and tactics of the 1920s and even 1930s, especially where it was a question of the combat use of modern armored vehicles. He looked very impressive against the background of all the other cars of this time, even if he did not take part in real fights. In any case, there is no information about the combat use of these machines. Apparently, they were used only as training. Although there is a photo of 1940 of the year, and on it “Vickers Medium” is shown on the territory of the British military base in Egypt. It may well be that there they were used to train crews, or used for the protection of airfields. 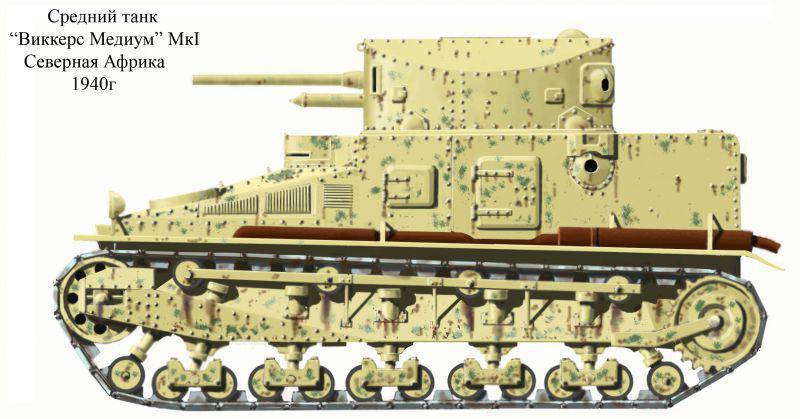 In England itself, the Vikkers-Medium tank was modified several times and underwent various improvements. So, if, for example, there were three Vickers machine guns in the Mk.I turret, then at the Mkl.IA two rear ones were removed, and the armor of the turret was supplemented with a beveled sheet also from the back. And in the same sheet in the ball set put the gun “Hotchkiss” with air cooling for firing at aircraft, although its value as anti-aircraft and was clearly relative.

There was a CS model - a “close sappot” - “close” or fire support for infantry, which was armed with a lightweight 76,2-mm caliber gun. Incidentally, it is surprising why the British did not try to arm this tank with a normal 76,2-mm caliber gun, reinforcing the turret chase. After all, its dimensions completely allowed such a weapon to be placed on it. And it would have been a truly tank-destroyer, since at that time there weren't any tanks on such tanks, and it was here that the British had the opportunity to break away from all the others for a whole decade. However, for some reason they did not do it ...

The modification Mk.I A * (“with a star”) had a turret of a commander of the type “bishop’s miter” - with two bevels on the sides. A radio station was set up on Mk.II ** ("with two stars"), which was also a rarity at that time, although for this, an armored box had to be attached to the back of the tower. 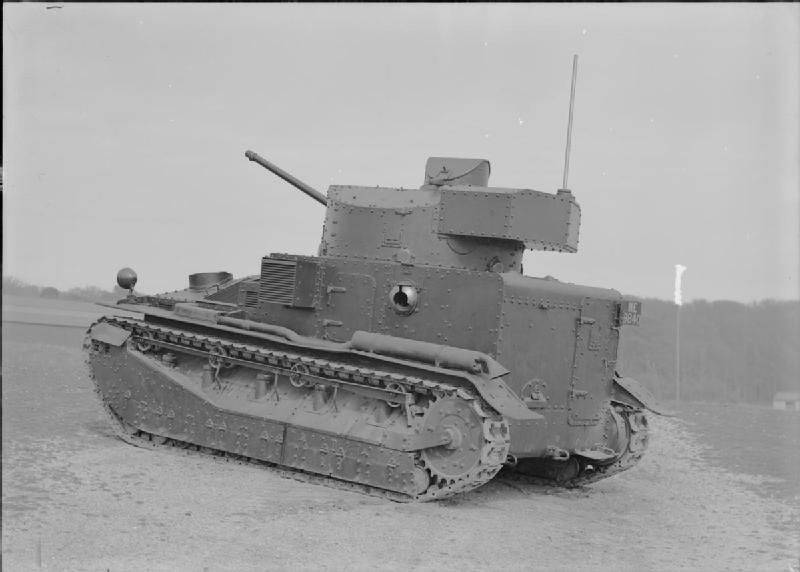 Tank with a radio station.

He has served the Vickers Medium since 1923, and became the basis for many experimental machines. So, in the 1926, they made it a wheeled-tracked variant, with four rubber-coated wheels for driving on the highway, which were lowered and raised by motor power. And although the tank was driving, the participants in the tests immediately noted that it was rather “similar to a house on wheels than to a fighting vehicle”. Therefore, more such experiences with him did not. But in 1927 / 28. tests passed Mk. II - bridge laying with a bridge span of length 5,5 m, although also unsuccessfully.

Were released tanks Mk.II "Female" with a pure machine-gun armament for the government of India. Four more cars were built for Australia in 1929, under the designation Mk.II * “Special”. Three chassis decided to use for experienced 18-pounder ACS and control tanks with powerful long-range radio stations installed on them. 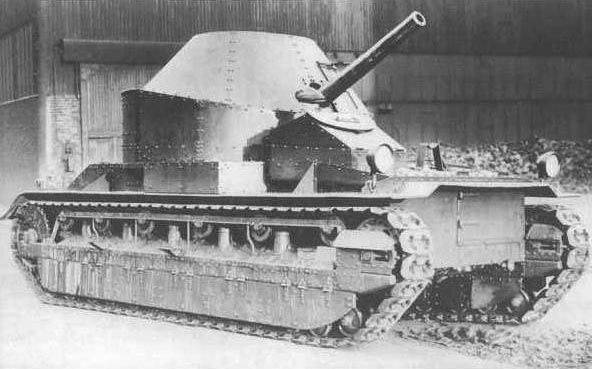 In 1926 / 1927 Vickers has developed another Vickers Medium tank, but under the C mark. This car did not go into the series and was purely experimental. 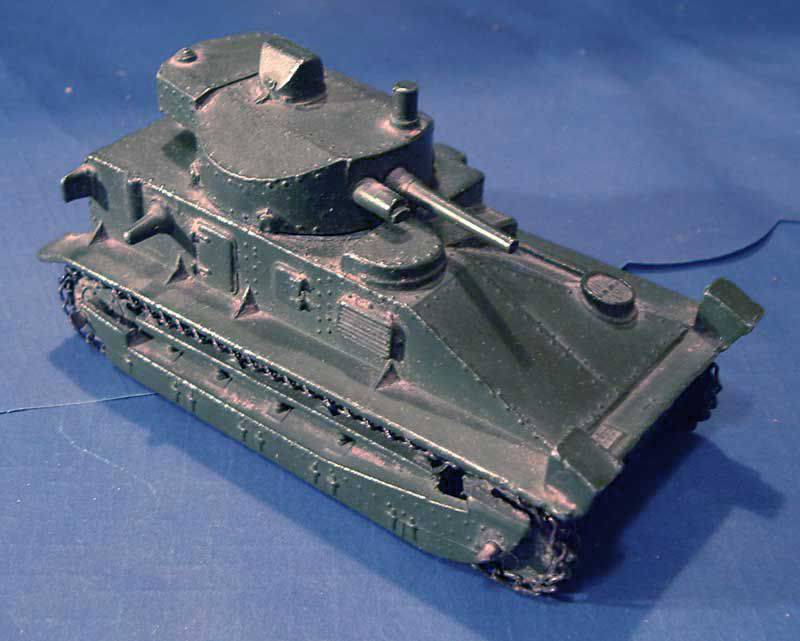 On it, the English designers had already applied the classic layout: the control compartment was in the front, the motor was in the back. The drive wheel was also located behind, although the suspension and chassis, partially covered with a bulletproof armor, was almost similar to the base model.

But for some reason the weapons on this tank were deployed extremely unfortunate. Two water-cooled machine guns were also installed on the sides, but they could not shoot at planes and had limited pointing angles. They put a machine gun in the turret, firing back, the so-called “Voroshilovsky”, as similar machine guns were called in the USSR, where at the end of the 1930s. they were ordered to install our “first red officer”, “first marshal” and “iron commissar” on the tanks. 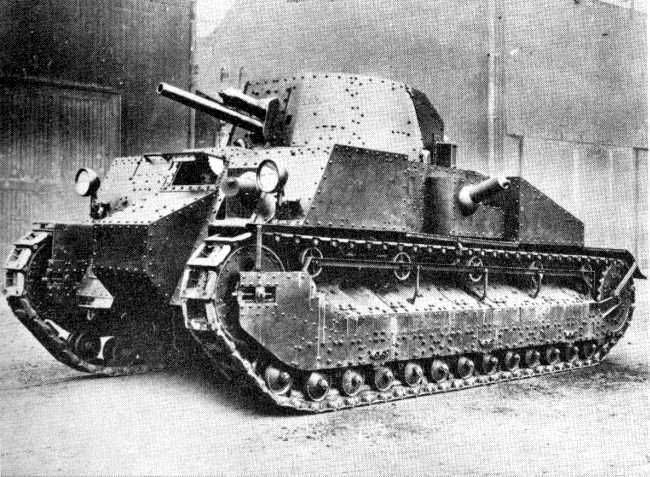 But the firm "Vikkers" did not lose and with this tank. In 1927, Japan bought it, and already in the 1929, it was on its basis that the Japanese constructed their first medium tank, the Type 89.

Ctrl Enter
Noticed oshЫbku Highlight text and press. Ctrl + Enter
We are
Is the old well forgotten to become the new? Part-2. By call of honor and dutyArmored vehicles of Germany in the Second World War. Medium Tank Pz Kpfw V "Panther" (Sd Kfz 171)
13 comments
Information
Dear reader, to leave comments on the publication, you must to register.