11 September 2015
31
Flying platform De Lackner HZ-1 can rightfully take its place among the most unusual aircraft in stories of humanity. Looking at this hybrid of a lawnmower and a helicopter, you involuntarily begin to think about the adequacy of the creators of the creature, but in the US 1950-1960 in the United States in all seriousness worked on the creation of such aircraft. All of them were a flying platform designed to carry one (maximum two) servicemen. It was assumed that with the help of such aircraft soldiers will be able to quickly move around the battlefield, to conduct reconnaissance and hunting for enemy spies. The flying platform De Lackner HZ-1 became just one model, which was created within the framework of this concept, while not one of the aircraft was adopted for service.


For army aircraft, reconnaissance has always been one of the main tasks, but the use of individual aircraft for these purposes did not always seem to be a rational waste of resources, and effective unmanned aerial vehicles simply did not exist in those years. At least this is how the creators of the De Lackner HZ-1 aerial single-deck platform, which was controlled by the pilot using tilts in different directions, thought so. The army even acquired several prototypes for testing, but as it turned out, it was much harder to control them than originally thought. Plus, the rotors located under the bottom of the vehicle could lift dirt and stones from the surface, directing them directly to the pilot's face if the flight was carried out at a small height above the ground. In general, the aircraft was quite controversial, if not more. 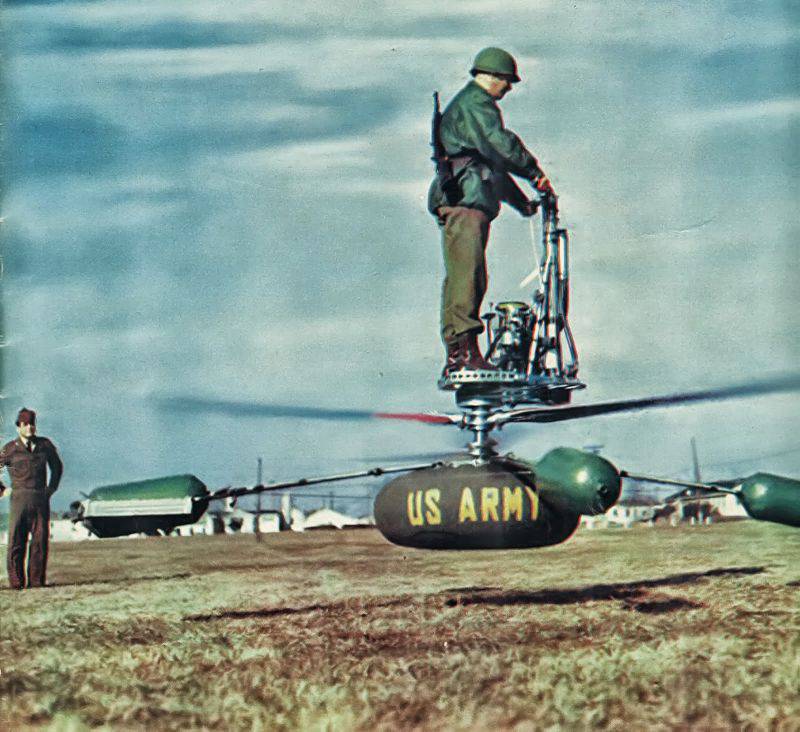 The first researcher who proposed the concept of individual helicopter-type aircraft was an American engineer, Charles Zimmerman of the National Aeronautical Advisory Committee. Considering the various options for such devices, he came to the conclusion that the screw and rotor in them should be placed not from above, but from below: such an arrangement allows for greater stability during flight. In addition, Charles Zimmerman suggested that to keep the aircraft in an upright position, it would be enough just a sense of balance that any adult has. He meant that set of reflexes, which allows a person not to fall while riding a motorcycle or a two-wheeled bicycle. In his opinion, the manual "kinesthetic" control was to be the basis for the controllability of the air transport they offered.

The aircraft of the type described in the middle of the 1950-ies was built by De Lackner. This unit, originally called the DH-4 Helivector, was later renamed HZ-1 Aerocycle and resembled a hybrid of a helicopter, a motorcycle, and an onboard motor. The aircraft was equipped with an engine power 40 hp, which was mated with two coaxially located screws. The screws with a diameter of 4,6 meter rotated in opposite directions, which avoided the rotation of the platform itself, on which the pilot stood. In this case, the pilot was located vertically directly above the rotating propeller blades (representing, among other things, mortal danger), being protected from falling only by seat belts. To control the device was provided for steering, similar to the motorcycle. With it, the pilot had to change the speed, direction and altitude of the HZ-1. In order to make a turn, it was necessary to tilt the entire aircraft in the right direction - just as it does on a motorcycle. 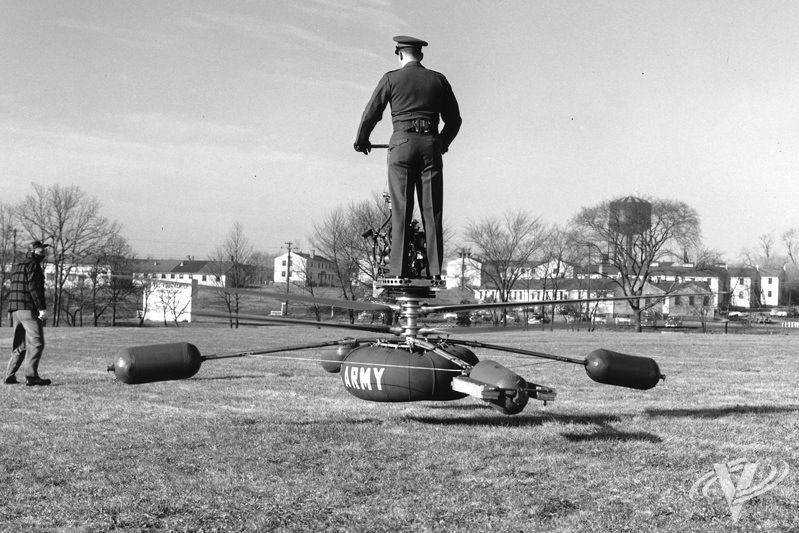 The first sample of an unusual aircraft rose into the sky in January 1955, after which the army immediately ordered a dozen samples. According to the experts of the company De Lackner, their aircraft could reach speeds of up to 105 km / h and carry 55 kg of payload in addition to the pilot. The device could be in the air for an hour. At the same time De Lackner HZ-1 was a very dangerous mechanism. In addition to the fact that the pilot was standing directly above the rotating screws, they were also located in the lower part of the apparatus. When landing or when flying at low altitude, they could easily tighten any debris or pieces of rock that could cause an accident of the device.

It was assumed that the US military will be able to effectively use this flying platform just after the briefing duration of 20 minutes. But test pilot Selmer Sandby, who tested the HZ-1, had a different opinion. In particular, he noted: "It was enough for me to have only one flight in order to understand: it would be damn difficult for an ordinary person to cope with this design." And the reliability of the flying platform at that time left much to be desired. During testing, the blades of different screws collided twice with each other, which each time led to the fall of the vehicle. One of these air incidents nearly ended with the death of Selmer Sandbay himself. In the end, all the identified shortcomings led to the closure of this program. At least one such flying platform has survived to this day, which is on display as a museum piece. 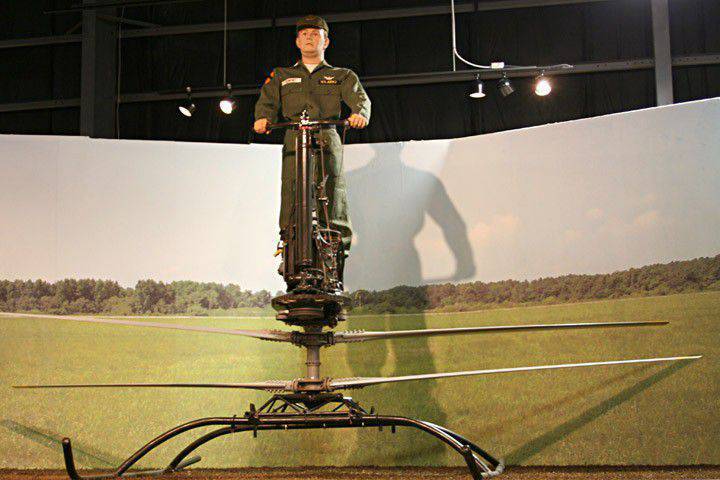 A similar aircraft, known as the VZ-1 Pawnee, was later created by Hiller Aviation engineers. The development also applies to the 50 years of the last century. The developers of this device also believed that the military would be enough, if not 20-minute, then at least a two-hour introductory course, which will help them learn to fly on their offspring. The difference with this design was that the screws, which were only 3 meters in diameter, were hidden inside the round case. In fact, they were tunnel type fans. Moreover, the tests carried out demonstrated that the VZ-1 Pawnee apparatus itself seeks to assume a vertical position during flight: the tilted edge of the flying platform developed a greater lifting force than the battened edge, for this reason it leveled off on its own. To change the direction of movement of the platform, it was enough for the pilot to slightly move his body in the desired direction, moving the common center of mass of the system. It was almost impossible to overturn the platform in flight.

Initially, the American military leadership embraced the development with enthusiasm and it was quite the results of the tests. Therefore, soon the company Hiller Aviation was issued an order for the creation of two larger vehicles of this type. However, in the end, this development was not brought to the serial stage. The program was closed after the military decided that the idea of ​​moving fighters through the air under advanced conditions seemed too fantastic and impractical. Indeed, such an aerocycle was too convenient a target for defeat from the usual rifle weapons. 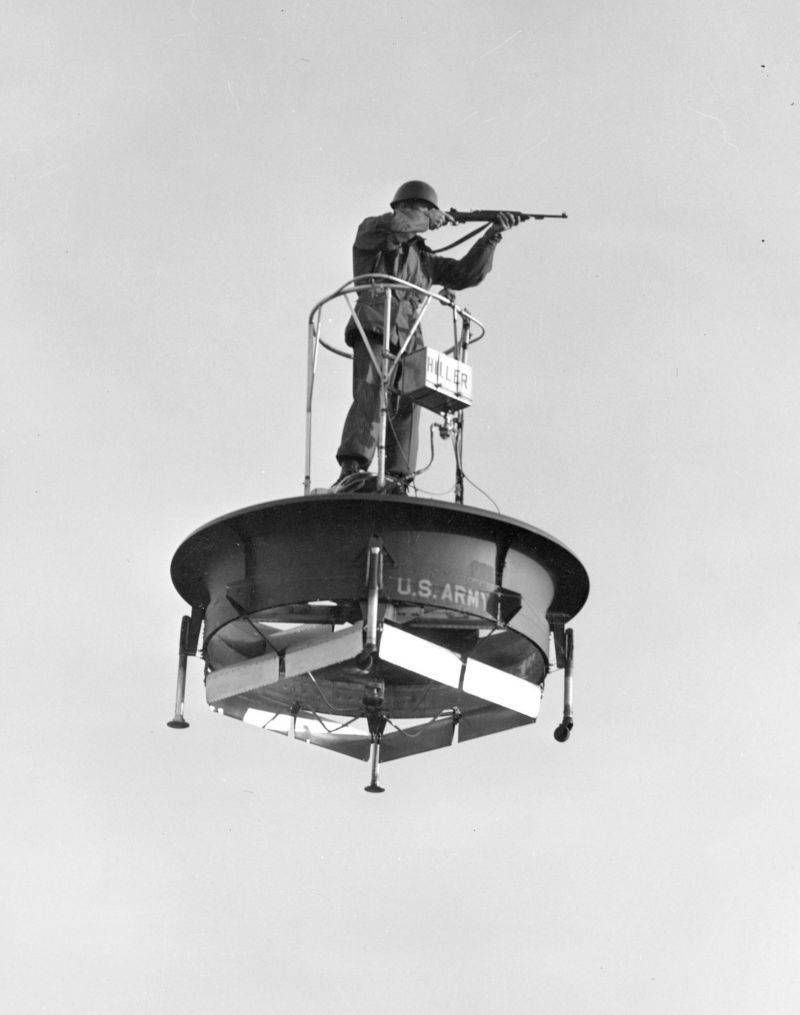 Ctrl Enter
Noticed oshЫbku Highlight text and press. Ctrl + Enter
We are
I fight for the electric body! Ground mobile robots on today's and tomorrow's battlefield. US Technology OverviewIron call
31 comment
Information
Dear reader, to leave comments on the publication, you must to register.