Where death chains are rusting ... 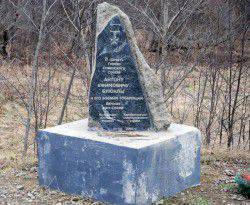 Until now, Sakhalin is crossed by a clearing 130 kilometers long. It stretches exactly along the 50 parallel. This is the former border between the USSR and Japan, between Russia and the Land of the Rising Sun, which, after the end of the Russian-Japanese war of 1904-1905, was conducted here by military surveyors, according to the Portsmouth Peace Treaty.


After September 1945, the border that divided Sakhalin Island in half was gone. The frontier clearing, the former control and trail strip, was overgrown with birchwood, but this green scar, which runs from coast to coast, is clearly visible from above. The Japanese came here in the 1905 year, for forty years in a row to rush out forest, furs, coal, fish, and gold from South Sakhalin. They did not feel the masters of this land. They were in a hurry, foreseeing their short Sakhalin age.

... I remember an old trip to Sakhalin. We are driving in a car with the former chief of staff of the 3 th battalion of that very 165 th rifle regiment, which in 1945 was breaking through the first line of the Japanese defense - Boris Sergeevich Zakharov. Behind us is a bus with Sakhalin draftees. Zakharov again becomes the chief of staff - he draws charts, sorts out the numbers of subdivisions, names the names of the commanders. And now the taiga country road is no longer a country road, but a rokadnaya road, the hill on the right is the Kharamitogsky fortified area, but the harmless little river Orlovka is an almost irresistible water line.

Here along the coast lies the battalion of Captain Svetetsky. The fire from the Japanese bunker did not give to raise their heads. And then the machine gun choked ... Senior Sergeant Anton Buyukly closed the embrasure with his body.
Bunker and now still stands. Overgrown embrasures, like droplets of blood, swept over dark red lingonberries. All this was on the outskirts of the main battle - the battle for the Haramitog heights.

For decades, the Japanese have built pillboxes, casemates, gun nests, multistory underground passages on these hills. They built solidly and firmly, according to the latest fortification, with Japanese diligence forging defense in depth.

Knowing all this, our troops thoroughly prepared for the assault. One and a half months after the victorious volleys on the occasion of the defeated Berlin, here, on Sakhalin, on the Palevsky heights, so similar to the Harami-Toge pass, trenches were dug, mock-ups of pillboxes and bunkers were put up, wire barriers were tense, conditional minefields were exposed. Trained until bloody sweat. But then, knowingly, they attacked the Haramitogsky fortified area.

11 August 1945 of the year in 9 hours 35 minutes the troops of the 56 Infantry Corps under the command of the Guard Major General A.A. Dyakonov attacked a chain of Japanese forward strongholds.

But on the concrete walls can not see the bullet marks, not broken walls and shells.

The fight was not at all on the side where the muzzles of Japanese cannons looked. The battalion of the Hero of the Soviet Union, Captain L. Smirnykh walked around the fortified area from the rear, and this largely decided the fate of the Kharamitog fortress.
Then the sappers worked, lifting into the air one or the other reinforced concrete hole. And now, even in the overgrown ruins, death chains are rusting ...

Despite powerful artillery and aviation the blows delivered on the day of the breakthrough, their effectiveness was insufficient. Not all firing points were destroyed. The Japanese position was covered by a perennial forest in which only the shelling sectors were cut. The crowns of the trees made it very difficult to adjust the artillery fire. In addition, the almost non-flying low-cloud weather prevented attack aircraft from conducting targeted bombing. Yes, and we must pay tribute to the Japanese military builders, who concrete pillboxes on conscience, providing them with a very high survivability.

“Cuckoo” snipers were scattered through the forests, who targeted commanders, liaisons, car drivers, were beaten according to gun crews ... In dense thickets, infantry marched ahead tanksdestroying suicide bombers.

Zakharov with a bare head slowly climbed the slope. He crossed the tracks a long time ago, flying bullets and shells ... Then, in August, 45-th, they all swept past him. But near this bridge his friend, a battalion commander, captain Leonid Smirnykh, was killed outright. Now Zakharov lived in the village named after the heroic battalion commander - in the village of Smirnykh. Dozens of names of the dead heroes appear on the maps of Sakhalin and the Kuril Islands: Leonidovo, Buyukly, Savushkino, Telnovsky ... He came to the places of past battles and the Hero of the Soviet Union, retired colonel G. Svetetsky. He sought out the bunker, in which the senior sergeant of Buyukly died, put field flowers into the embrasure.

Zakharov looks to the south. Then, in the forty-fifth, the word "forward" just meant - to the south. And it sounded the same as for the fighters of the Belarusian, Baltic, Ukrainian fronts cry "to the west!".

“We have a regiment,” recalled Boris Sergeyevich, “almost all were Sakhalin residents. We could not come here. The war could not end, as long as even a inch of Russian land was under the enemy. We had the honor of returning these last spans ...
Search teams are actively working on Sakhalin, which replenish city museums with their unique finds - from porcelain cups of Japanese officers to suicide medallions of Soviet soldiers. Sometimes it is possible to find in them the exact address of the owner and then fly to the distant Siberian, Ural villages and cities of the notice that the remains of someone's grandfathers and great-grandfathers were found in the ruins of the Kharamitogsky fortified area. The name of the Soviet soldier found in 2004, then buried on the memorial complex in Pobedino village, was found on the inscription on the handle of an aluminum spoon plugged behind the boot's boot: "Ml. Sergeant Bunkov AK Irbit, Sverdlovsk region."

- Dugout dug up. In the depths on the couch the remains of a Japanese soldier. Apparently, he fell under the shelling ... The backbone is broken by shrapnel. At the entrance crumpled bowlers around. The bowlers are different, they are fastened with a strap. At the bottom of one of the pots, inserted one into one, two apricot stones of yellowish-brown color.

The battles were fierce here ... The backbones lie side by side with the broken weaponscartridges. A large skeleton — our fighter — large, tall, lies on its back, having died face to face, with its arms wide open. Another fighter either hid, or died in a forest hollow after fatal wounds, pulling his knees up and covering his face with his hands ... Go ahead, ledum trample. The Japanese in the backswing tilted backwards. There was a hand with a grenade under the back of my head: I didn’t have time to throw it, I wanted to quit it. The garnet is wooden, round, as if the mug with tolom, and on the handle the lacquer is preserved. There are two Japanese soldiers in one burial, two of ours under them. Cartridges shot everywhere. They shot at close range, joined the bayonets, converged in hand-to-hand ... An officer and three soldiers ... Oblate bullets - in the chest, in the pelvic bones ... They died scary, hard ...

That is why we will sacredly remember them - all, even the nameless ones. It's hard to die after the Victory. And they had to ... And the songs about them have not yet been laid down.
In the meantime, only the inscription on the memorial plaque: "50 parallel. 11 August 1945, part of the Soviet Army from this line began the liberation of South Sakhalin - the originally Russian land from the Japanese invaders."

We are in Yandex Zen
The quartering and arrangement of the army during the Russian-Japanese war 1904 – 1905.
Russo-Japanese War 1904-1905's. State of the Russian fleet. Bad luck and missed opportunities
14 comments
Information
Dear reader, to leave comments on the publication, you must to register.