Heliogabal: the most depraved Roman emperor

17 September 2015
24
Absolute power corrupts absolutely. This is a rule from which there are exceptions and, nevertheless, it is still a rule. Although it is possible that it corrupts everyone in different ways. Someone orders a golden toilet, sleeps with the actresses, and someone executes supporters. No wonder the people say: "Who likes pop, who gets to, and who pop daughter." Let us recall the Roman emperors: Tiberius corrupted by power, Caligula corrupted and Nero, who is almost as depraved, are the “talented” Roman heroes stories, mutilated by their absolute power. But which of the Roman emperors was the most depraved? Well, of course, Geliogabal: of all this company, he is by far the most “amoral freak” on the scale of everything that is excessively obscene. 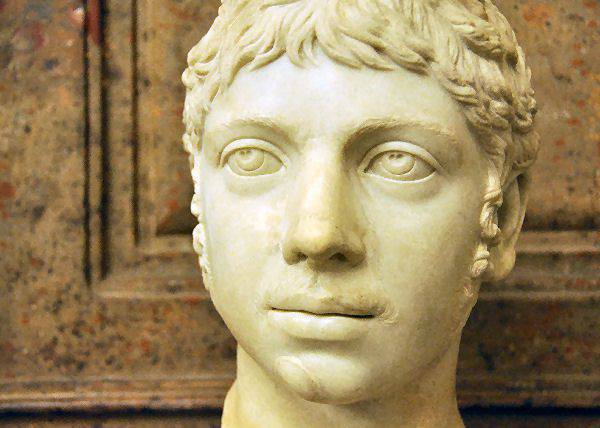 Priest of the "sunny sky"

The Syrian Legion, admiring the beauty and charm of a fourteen-year-old boy dressed in a magnificent priestly attire, proclaimed him the legitimate Roman emperor, giving him the name of Caesar Marcus Aurelius Antoninus August. The very procession of Aurelius Augustus from Syria to Rome was unusual. Before him carried his ... portrait! “He was depicted in priestly robes of silk and gold, wide and long according to the custom of the Medians and Phoenicians; his head was covered with a high crown, and he was wearing many necklaces and bracelets, decorated with the rarest of precious stones. His eyebrows were painted black, and on his cheeks were visible traces of blush and white. The senators had to admit with sadness that after Rome endured the ominous tyranny of its own countrymen, he finally had to bow before the pampered luxury of oriental despotism. ”

The authority of Heliogabala was in a certain way provided by the support of the Roman army, which enabled the emperor to mix the rites and beliefs of the East with the traditions of Rome with fanatical zeal. The decoration of his own chapel with statues of Abraham, Apollo, Orpheus and ... Christ is well illustrated by the emperor's intention to bring together all sorts of religions of the time. Heliogabal, not officially proclaimed under this name, after building a temple in Rome to praise the god revered by the emperor, whose priest he was, having received power, first of all raised his mother, bestowing upon her the title of senator, which had not happened before. Although here Caligula and elevated his horse to the senatorial dignity. His plans were to bring in the temple Christian, Jewish and Samaritan worship. So he dreamed of a comprehensive control over all known to him faiths. Such, rather bold and unacceptable statements, of course, were misleading the Romans, who increasingly doubted the adequacy of Heliogabal. Palladium, the fire of Vesta, the shields of Saliev - everything sacred and venerated by the Romans was gathered under the roof of one temple. At that time, the emperor daily in Syrian clothing, with roughened and whitewashed cheeks, blackened eyebrows and eyed eyes in front of significant Roman people, performed a divine service. Complementing his dances to the music and chorus of young girls. But it was only the beginning.

The peak of imperial madness fell on the marriage of the "beloved" god of the emperor with the goddess Tinnitus invited from Carthage. In honor of such a divine event, he even sacrificed several handsome young men from revered families, having resurrected, thus, a tradition that had long been forgotten in Rome.

Dancing, constantly catering to the whims of the emperor, Heliogabal made the prefect (police chief) of Rome, the barber liked - the prefect of food supply, his rifleman - the head of security. It is striking that the Romans were not outraged by the almost demonstrative selling of posts for coins - who would give more. Another thing is that the places were distributed to men with genitals of non-standard size, with whom Geliogabal indulged in debauchery. The men tried to reassure the men who had been pleasing him. Former slaves - freedmen - he turned into governors, legates, consuls, thus dishonoring the authority of titles, distributing them to any people he liked. A marriage with a certain Zotik, who had a significant influence on him, had even more influence on Heliogabal. Indeed, not a single emperor in world history has dared to this day, although same-sex marriages are legalized in Europe today.

However, we still use some of the things that Heliogabal has invented today. After all, he invented it ... lottery with prizes! And this imperial idea for a while softened the attitude of the Romans to it. The commoners, the poor and the poor, were invited to him in the palace, where they enjoyed refreshments at feasts; and there they were given numbered spoons of tin, silver, and gold with numbers stamped on them, which were immediately shouted at the feast. As a result, someone received ten camels or a slave from Britain, someone a jug with flies, someone ten pounds of gold, and someone a piece of roast pork or ten ostrich eggs, to the joy and to the laughter of the others, and above all those who, as a prize, were given, for example, dead dogs. The one who won a hundred gold coins with an imperial profile was considered the happiest. Dazed by wealth and gifts, the Romans admired the generosity and kindness of Heliogabal. Of course, the emperor also held a feast not like the others. The list of non-traditional dishes included: combs cut from live roosters, brains of nightingales, beans with amber, boiled peas decorated with golden balls and rice along with white pearls. And there were also channels filled with wine, from where it was possible to scoop it in unlimited quantities.

The emperor's care to arrange a fantastic and unlikely holiday and present a gift to a dear guest did not allow him to forget about his own persona, so sometimes his meals were going out at the cost of at least a hundred thousand sesterces. Sometimes the bullying of Heliogabal over his hangers-on was superior to any likelihood. They were served dishes of wax and stones, while it was necessary to pretend that they all eat it. In honor of the eight mutilated, stupid, lame, hunchbacked and one-eyed, specially organized holidays were held, again for the sake of laughter. The emperor's desire to “laugh heartily” reached the point that the unfortunates, when they were drunk, were closed in the same amount into a huge cage with tame, trained leopards, bears and lions, enjoying their inordinate fright through secret eyes. He was the only one who learned how to prepare jelly from fish, oysters, lobsters and crabs, and he invented a wine made from rose petals to make it even more fragrant: he decided to add mashed pine cones to it. All the depraved actions on the ideas of the mimes, he ordered to perform in reality, which previously could only hint. And there was also snow, once introduced from afar, is another manifestation of the emperor's ambitions: it was intended for the construction of a snow mountain in the palace of Rome. Heliogabal introduced the tradition of Roman culture to wear capes of pure silk, which he bought at fabulous prices from Chinese dealers. None of the expensive items of clothing he wore twice. He slept on lodges whose bedspreads were filled with fluff from ... armpits of hares. There he was the most gentle, and how many hares it was necessary to catch and pluck? He preferred carts laid out in gold; instead of horses, naked women were harnessed to them, on which he, too, traveled naked around the whole palace. Heliogabal defecated only in golden vessels, but urinated in onyx.

Abusing his unconventional sexual needs with girls, men and boys, the emperor did not forget about the prophecy of the Syrian priests, who predicted a violent death. To this, the emperor chose to prepare in advance. Of course, the legitimate emperor was considered shameful to die at the hands of a stranger, so ropes of silk were laid out throughout the palace in order to strangle. He prepared both "poisonous" bottles of precious stones, and sharp golden swords to stab in case of fatal circumstances. Around the high tower built, the emperor ordered to lay out the courtyard with golden plates decorated, of course, with precious stones. It was necessary for him to climb to the very height and fold down, so that his sacred brains spread not on the ground, but on gold.

Four years of the Roman emperor's reign caused a serious resonance in Roman society and a strong disgust of the citizens, therefore a conspiracy was made against the emperor. They began with the murder of the depraved emperor's close, and moreover, trying to match the type of murder ... to their way of life. The emperor himself hid in a latrine, where he was killed along with his mother. There is a version that the body of Heliogabal was dumped in a cesspool, and then in the Tiber. Although it may be that it is stuck in the hole of the cloaca, so it still got it from there and threw it into the river. Such a fate was exceptional, because all the other emperors killed as a result of conspiracies, starting with Caesar, were still buried. And here is such a truly sad end. The Senate has forever forbidden to pronounce the name - Antonin, declared damned and dishonored.

The life story of Heliogabala, who was born in 204, AD and the rules from 8 June 218 to 11 March 222, were reflected in the historical works of Herodian and the biographies of Lampridia and Dion Cassius. All the above details of sexual debauchery are reflected in the writings of these writers. However, that in all this fiction, and that a lie, today is no longer possible. Truth always flies somewhere in the clouds.

We are in Yandex Zen
Recall Iwo Jima
Roman fleet. Ship type and design
24 comments
Information
Dear reader, to leave comments on the publication, you must to register.