Tanks of the Russian Empire

12 September 2015
47
During the First World War, the first Tankswhich at the end of the war were actively used by both sides. At this time in Russia, the world's first armored vehicles appeared on the front, which became the beginning of another branch of modern armored vehicles. Now many interested in armored vehicles know such projects of Russian tanks as the all-terrain vehicle Porokhovshchikova and the Tsar Tank, but there were other projects that never saw the light of day. In this article I will try not just to write history create tanks, paint the performance characteristics, but also consider their place on the battlefield.

Aleksandr Aleksandrovich Porokhovshchikov, who at that time was working at the Russo-Balt plant, began work on his all-terrain vehicle in the 1914 year. The project was a high-speed tracked armored vehicle for off-road driving. By January, 1915-th documentation was ready, 18 in May of the same year, the machine came to the test. In winter, funding for the project was discontinued due to the fact that the snow flow did not exceed 30 cm (1 feet). Interestingly, the all-terrain vehicle was tested as a non-combat vehicle. 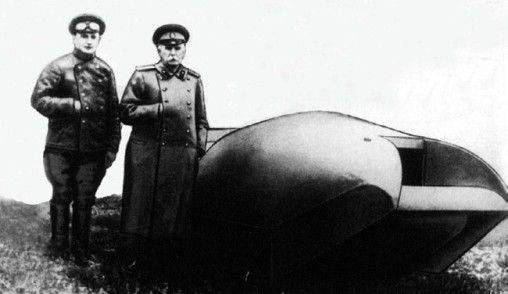 The crew consisted of one person who was in the center. MTO was located behind. In general, such a layout can be called a classic, given the size of the crew. The body is welded. The Volt engine, a 2-cylinder, carburetor, with air cooling, developed the power of the 10 hp, which allowed the 3,5-ton car to develop speed in tests of the 25 km / h. According to some reports, in winter, the all-terrain vehicle 1916 accelerated to 40 versts / h (≈43 km / h), which is doubtful. The running gear most of all reminded modern snowmobiles - the only canvas caterpillar is stretched on drums, stretched under the bottom. Purely tracked was used for off-road driving. The main course was still wheeled-tracked - on two wheels and a rear drum. Such a device made it possible to reduce the pressure on the ground (of the order of 0,05 kg / cm2), but it was too difficult for turns and design. In the process of testing Porokhovshchikov continuously modifying the chassis. 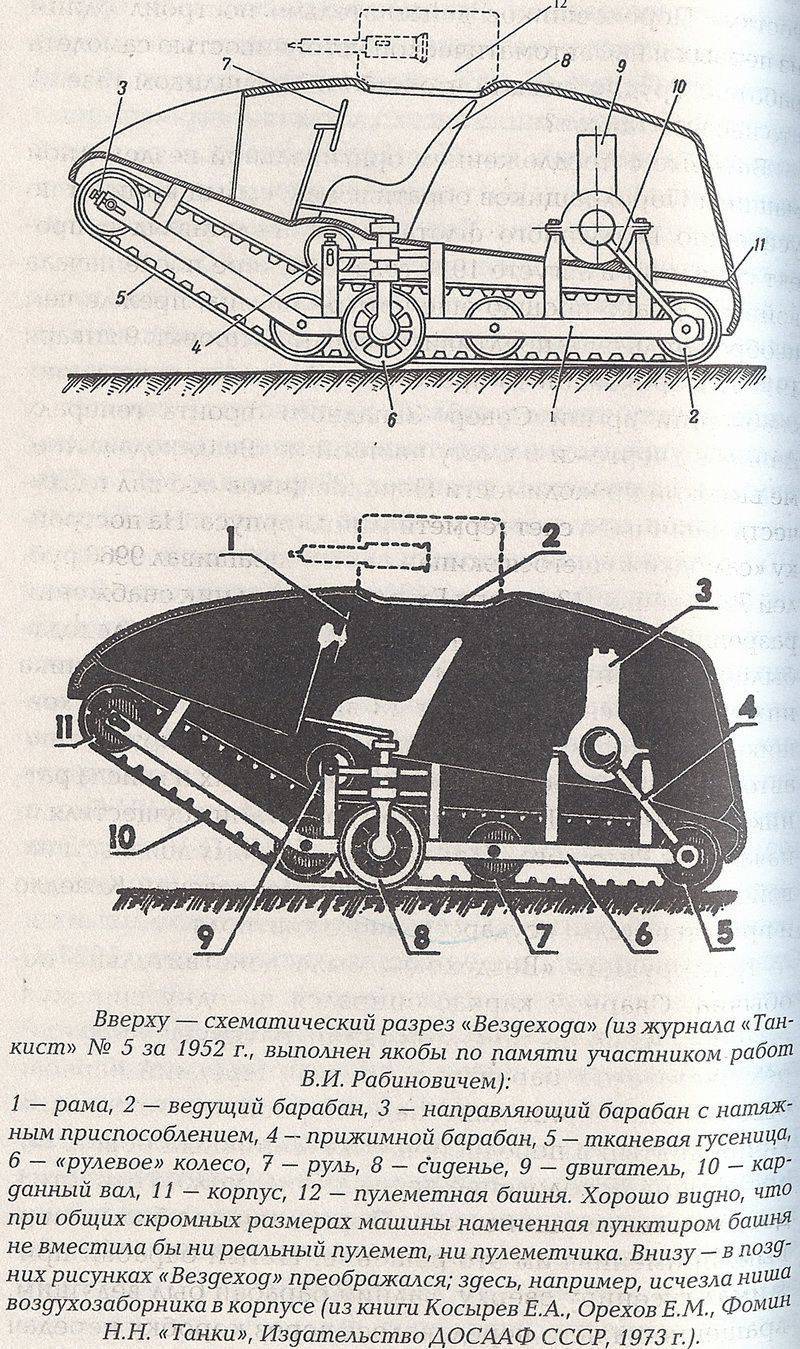 One of the most interesting features of the machine was the reservation - round, ricochet shapes and a multi-layer construction of boiler iron and layers of dried pressed sea grass. According to the inventor, such armor could withstand a machine-gun burst. In the experimental version in the frontal plane there was an air intake lure, drastically reducing the advanced hull design, although in the later drawings this vulnerable area was eliminated. Armament from a single machine gun was in the swivel turret, which never appeared to be tested, but was visible on the drawings.

In 1916, Porokhovshchikov began the development of a large crew 2 all-terrain vehicle, powerful for that time for a light machine, armament from 3 machine guns, one heading and two turrets rotating one over the other. Chassis improved - now the basis were 4 wheels. Armor has lost round shape. Before the revolution, the prototype machine was never released. 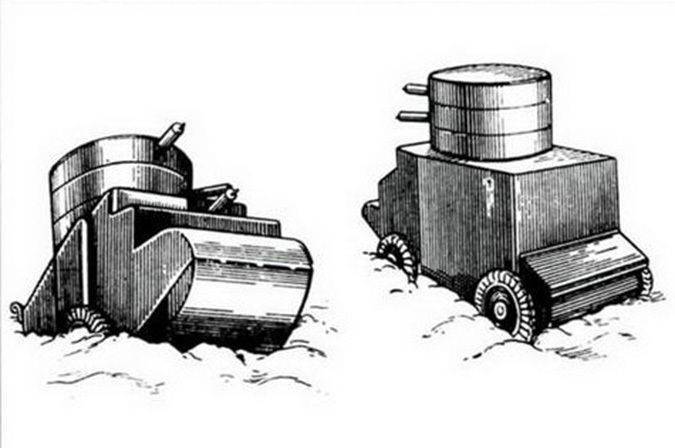 Let many consider Porokhovshchikov’s all-terrain vehicle the first Russian tank — far from it. The first machine was not adapted to the battles - low maneuverability, power density, inability to conduct a search for a target, firing and movement, imperfection of armor. Although the design of armor and ahead of its time for half a century, but the real fighting strength of the boiler iron with a layer of sea grass could not give. Although the ricochet form could have reflected some hits, it would hardly be difficult for the rifle pool to penetrate such armor from short distances. The appearance of multi-layered armor in 60-70-x is due to counteraction to cumulative ammunition, and not to the growth of the power of kinetic shells. Among the minuses of the all-terrain vehicle, as can be noted, the caterpillar vulnerability. The vertical wall to be overcome was also low. But despite all these shortcomings, in many ways the car was revolutionary, because The first tank of the classic layout appeared in 1917, the rational armor tilt angles were implemented in the 30, and the one-track scheme still lives on snowmobiles.

The project of captain Nikolai Nikolaevich Lebedenko is still the largest linear-sized tank embodied in metal. The length of 17,7 m, width 12 m, height 9 m, which, frankly, a very controversial achievement. The idea of ​​the tank Lebedenko, in his own words, took the carts with two high wheels, which easily overcame the Caucasian impassability with mud, stones, pits. According to the inventor, the scheme of an armored gun would be very useful for breaking through the defense lines with its moats, trenches, shell craters and the main enemy of the infantry and cavalry — a machine gun. Having shown purposefulness, worthy of imitation, Lebedenko achieved that he was taken over by the emperor. The clockwork of the tank was very fascinating to the sovereign, and money, money and labor were allocated immediately. In the metal, the king-tank was made by August, and 27 numbers began running trials. The tests failed miserably, and the car until the 1923 was standing in the woods near Dmitrov, where it was dismantled for metal. 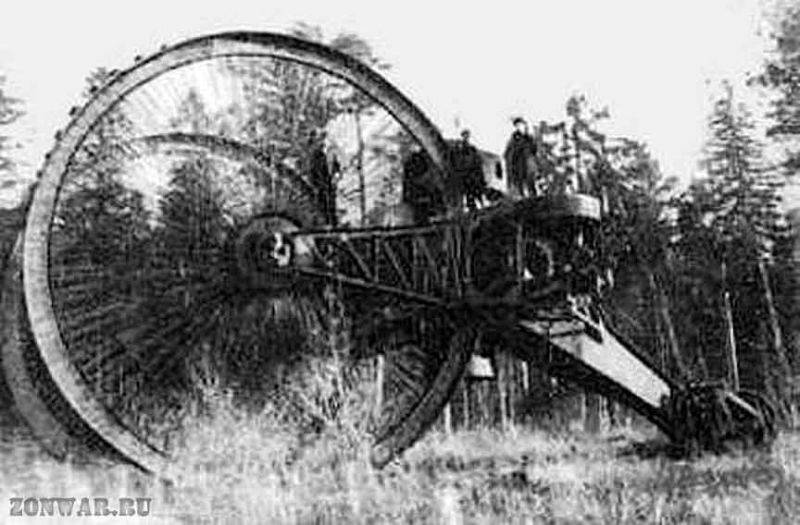 The tank was an enlarged gun carriage with one bed. Monsters were pushed by two captured Maybach aviation carburetor engines with 250 horsepower, which allowed them to accelerate to 10 km / h over rough terrain and 17 km / h along the road. Power reserve was about 40-60 km. A tank weighing in tons of 60 was testing trees without difficulty, as the inventor assumed. The booking was 10 mm in a circle and 8 mm in the roof and bottom, and in the project these figures were 7 and 5 mm, respectively. The crew in 15 people climbed into the fighting compartment on the frame (forgive me reader for the name of this element of the design). The armament consisted of 2 X-gun 76-mm cannon and 8-10 machine guns, which was the most powerful weapon by the standards of that time.

Let's go to the sad. One of the reasons for the refusal of the military from a high-traffic combat vehicle was its ... low permeability. Due to the improper balance of the design, the bed frame fell into the ground, and 500 hp engines did not have enough to pull the tank. Huge wheels, according to the commission, were too vulnerable for artillery, in which they were absolutely right - it is difficult to miss in a mastodon of such size. Armor without tilt angles, so it would hardly be able to reliably protect the crew. A huge number of trunks made it difficult to maintain and adjust the fire. Unlike the Porokhovshchikov all-terrain vehicle, the tsar-tank was adapted for combat, but not enough to become a breakthrough vehicle.

This tank, though not embodied in the metal, but in many ways his ideas ahead of time, making it a prototype for heavy SPGs. The creator of this miracle was the son of our great scientist D.I. Mendeleev Vasily Dmitrievich Mendeleev, ship engineer. The tank was designed from 1911 year. And despite the detailed elaboration of the drawings that honor the Russian school of engineers, the military did not take the "armored car" (as Mendeleev called his creation) seriously. 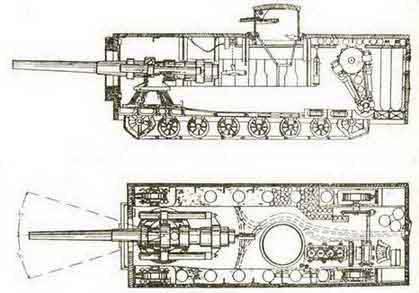 What was so special about the tank? First, the steel hardened armor, which withstands 6-DM projectile, was calculated to reach 150 mm in the hull forehead, 100 mm from the sides and stern, 8 mm on the bottom and 76 mm of the roof, however, there were no rational tilt angles. Thus, only heavy artillery could disable the tank. The armament was not inferior - the Kanet 120-mm cannon (45 barrel length, 5400 mm) in the front plate with ammunition in 51 projectile and the angle of horizontal guidance in 32 degree. Additionally, the tank was equipped with a Maxim machine gun in a swiveling turret, which was retracted into the tank. MTO and the entrance to the tank were located in the stern. The crew consisted of a 8 man. The length was 13 m, width 4,4 m and height - 4,45 m with a tower. Undercarriage crawler, consisted of 6 rollers, guide and sloth. Air suspension, allowing you to change the ground clearance (!) And go to the tank on the ground, turning into a pillbox. The weak spot was the gasoline 4-cylinder engine in the 250 hp. on 173 tons, which was negligible. The estimated speed was 25 km / h, which was unlikely with such an engine.

And despite all the awkwardness of the "armored car", Mendeleev created the best Russian tank project for his time. Simplifying the suspension design, cutting off excess armor, loosening weapons, we could get our solution to the position impasse of the First World War, but history does not tolerate the subjunctive mood, so let’s leave it to science fiction writers.

This car was first written in 1956 in the book of V.D. Mostovenko. "Tanks" (there is a second edition, amended and supplemented). The tank looked reminiscent of Mendeleev - the same brick on the tracks with a gun, though in the stern plate. The engine is in the middle. Reservations are much more modest - presumably 12 mm forehead and feed, 10 mm board. The armament consisted of either a 107-mm cannon and a large-caliber machine gun, or 76-mm and 20-mm automatic cannons. Suspension of the type of French tanks from the tractor Holt. The petrol engine, the 200 hp, looked good on a car weighing either 12 or 20 tons. In general, the car turned out modern and looked great on the battlefield, but did not enter the assembly. 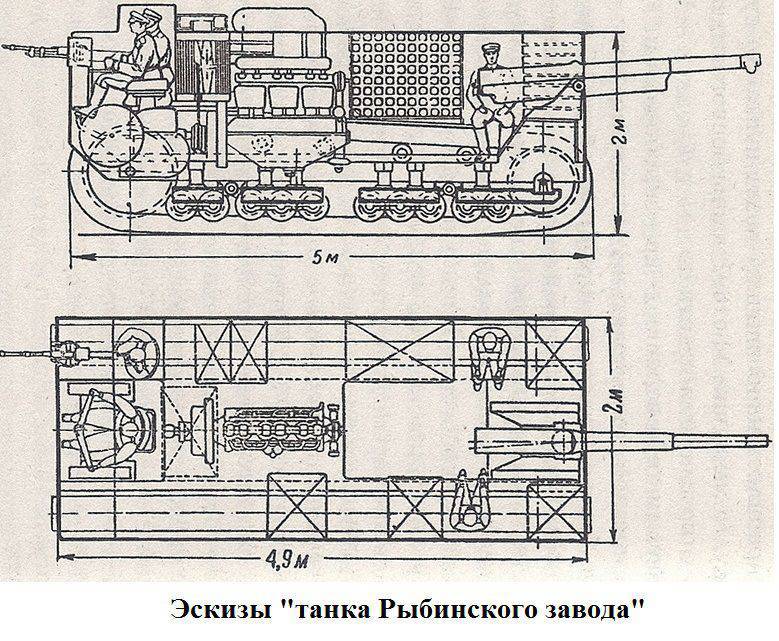 There were other projects of tanks in the Russian Empire, but many know so little that sometimes it is not known whether this or that project was real or whether it was the fantasies of later authors.