In mid-August 1914, 17, August 1914, the War Minister, Adjutant-General V.A. Sukhomlinov, fulfilling the order of Grand Duke Nikolai Nikolayevich, ordered to begin work on the creation of new domestic armored vehicles. Several specialists were involved in the most important program. Thus, the creation of equipment for the 1-th automobile machine-gun company was assigned to the colonel of the Life Guards Hussar Regiment A.N. Dobrzhansky. In addition, guards staff captain Nekrasov was attracted to the work.

Nekrasov was entrusted with the development and construction of a promising armored car with cannon armament. It is known that the staff captain worked in the Main Military Technical Directorate, and therefore, probably, had some experience with automotive technology. Nevertheless, the creation of a cannon armored car turned out to be quite a difficult task, which is why Nekrasov was forced to seek help from weapons specialists. As a developer of an artillery system, Lieutenant General R.A. was involved in the project. Durlacher (according to other data, Durlyakhov), known for his work in the field of artillery installations. He, in turn, invited the engineer A.A. Bratolyubova. This is how the “triumvirate” appeared, later on it started creating new armored vehicles for the army.

The new project was developed according to the standard for that time scheme. On the existing car chassis planned to install the original armored housing with weapons. This approach was actively used during the First World War and the armored car of Nekrasov, Durlyakher and Bratolyubov was no exception. Moreover, the development of the original chassis specifically for the armored car was impractical.

Within a few weeks, three experts completed the development of a new armored car and assembled its layout. The model and project documentation were submitted to the Minister of War, who reviewed them and approved the construction of the first vehicle. In addition, in the fall, Sukhomlinov presented documentation on the second draft of the armored car. The head of the military department ordered the allocation of funding and several cars that should be used as the basis for new armored cars. 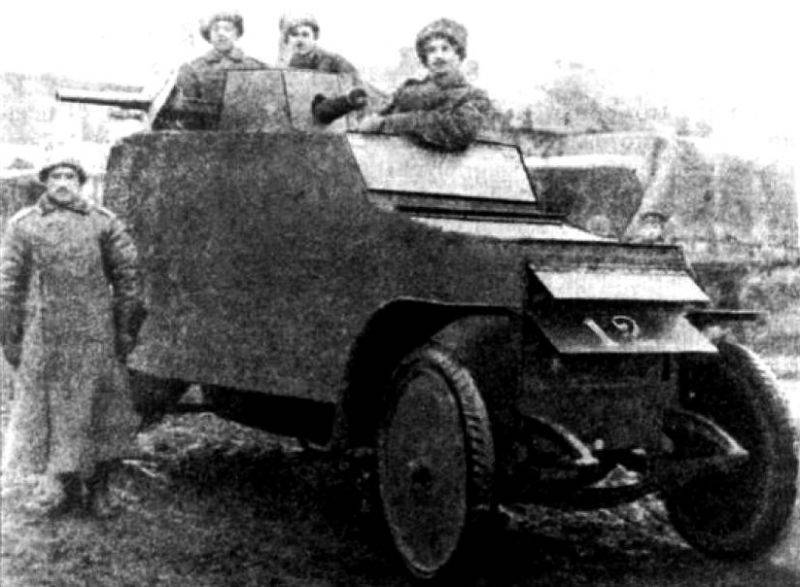 The only surviving photo of the armored car "Renault" Nekrasov-Bratolyubova

For the assembly of new technology Nekrasov team received several cars "Russo-Balt" and one "Renault". The French-made chassis was decided to use in the construction of a special armored car designed to accompany convoy. Currently, this project is known by the name of the base chassis and the names of the designers. In various sources, he is referred to as "Renault" Nekrasov or "Renault" Nekrasov-Bratolyubova.

All the armored cars of Nekrasov and his colleagues were to be built on the basis of passenger cars, which affected some features of the project. Available in the presence of the chassis "Renault" was a typical representative of the equipment of its class of the time. It was equipped with a gasoline engine, located in front of the frame, had the wheel formula 4x2 and chain transmission to the rear drive wheels. Dependent suspension based on leaf springs. According to some data, when assembling a new armored car, the chassis was modified and strengthened due to the expected increased loads.

The assembly of armored cars was carried out in Bratolyubov’s own workshops, the equipment of which allowed for the basic installation of various units. At the same time, however, there was no possibility of making armor plates. For the manufacture of armor to the project had to attract Obukhov steel plant. Nekrasov and Brothers made a set of special templates, according to which the plant made sheets of the desired size and shape. Then the armor parts were sent to the workshops of Bratolyubov, where the final assembly of armored vehicles was carried out.

Armored car "Renault" was supposed to get the armored hull, assembled on the basis of a metal frame. At first, the specialists assembled a framework from metal profiles, on which armor plates were then installed with the help of rivets and bolts. Due to the low characteristics of the base chassis, the authors of the project had to weaken the protection of the machine. The body of the new armored car was supposed to be made of 4-mm sheets. In addition, it was decided to abandon the roof. This affected the level of crew protection, however, allowed to save several tens of kilograms of weight.

Armored car "Renault" Nekrasov-Bratolyubova received vertical sides, common to the motor and habitable compartments. Thus, the width of the case did not change along its entire length. The front of the engine was protected by a frontal sheet with large vents, which were located at an angle and protected the engine from bullets and fragments. The hood lid was installed at a slight angle to the horizontal, tilted forward. For maintenance of the engine it could lift.

Protection of the driver and the commander was provided by the inclined frontal sheet manned volume. It provided viewing gaps to observe the road. Other devices for tracking the surrounding space were absent.

The armored car should not have a roof, in the place of which there were devices for installing weapons. In order to protect the shooters, two armored carts were installed on mobile units. Due to the correct mutual position, the guards could close both shooters from firing in front and behind.

The crew of the armored car "Reno", according to reports, consisted of four people: the driver, the commander and two gunners. To fall into place they should have been through the door in the port side. On the existing photograph of the armored car, there are no inspection hatches or slots in the sides. Apparently, the arrows should have monitored the situation, using the sights of his weapons and hiding behind armor shields.

The main task of the project was to create a light armored car with cannon armament. For this reason, the car "Renault" Nekrasov received Hotchkis 37-mm gun. It was mounted on the aft plant, in the center of the armored seat. The design of the mountings and guidance systems made it possible to fire at targets within a wide enough sector behind the machine. It was assumed that for firing at the target the armored car would be turned towards her astern. The supply of an armored car on the battlefield in reverse was considered normal practice at that time, but in the case of a vehicle designed to accompany the columns in the rear, the location of the main weapon in the stern looked ambiguous.

As an additional weapon, the Renault armored vehicle received a Maxim machine gun. It was proposed to mount it on the front installation with a shield. Thus, the machine gunner controlled part of the front hemisphere and could effectively deal with the enemy infantry.

It can be assumed that the proposed weapons complex in the form of an 37-mm cannon and machine gun rifle caliber allowed the prospective armored car to solve the vast majority of tasks that could be put at the end of 1914. At the same time, it was quite suitable for its main purpose - escorting transport convoys.

The order to build an experienced armored vehicle for the new model was received in September 1914. The assembly of this machine and other armored vehicles of Nekrasov-Bratolyubov continued until the end of February of the following year. Obukhovsky Plant, attracted to the project as a manufacturer of armor, for a long time could not organize the manufacture of the required parts without marriage. Because of this, the delivery of armor plates of the desired configuration and the assembly of several combat vehicles dramatically delayed.

Seven new armored cars, including one Renault, presented 23 February 1915 to the customer. Acceptance of the machines was carried out by a commission of the Main Military Technical Directorate headed by Lieutenant-General Mgebrov (father of staff captain, designer of armored cars). The commission studied the new equipment and allowed it to be tested. It was planned that Renault would serve in the 11-th automotive company.

During the tests, quite serious flaws of all seven new armored cars were identified. The main problems were associated with insufficient characteristics of the base chassis. Due to the relatively low power of the engines and the insufficient strength of the undercarriage, the armored cars could move normally only on good roads. On the highway, they were easily dispersed to 30-35 versts per hour (32-37 km / h), but on a dirt road the maximum speed fell noticeably. Left much to be desired and permeability. Armored cars stuck even in not too dirty places and on compacted sand. In addition, in different situations water boiling in radiators was observed, which indicated that the permissible engine loads were exceeded.

Problems with mobility and maneuverability were noted in the report of the commission. Experts decided that the presented armored vehicles could not be used for combat work at the front. The fate of all the new armored Nekrasov-Bratolyubova, including the "Renault", was in question.

Cars saved by General A.A. Brusilov, at that time commanding the 8 army. In March, 1915, he proposed to make armored rubber out of the existing machines. Such equipment could be used on the railways of Galicia, which had a European gauge. The leadership of the military department approved this proposal and decided to remake four armored cars, including Renault, under the new project.

For re-equipment the car was delivered to the workshops of the Kazan Railway (Moscow). In the course of the shift to the railway course, the armored cars were slightly modified. In particular, the chassis was strengthened and the composition of the special equipment changed. Especially for testing new armored rubber in the Moscow region, we moved a length of three versts to the European gauge.

In mid-June, a commission of the Main Military Technical Directorate headed by General Mgebrov examined the results of the work and approved the operation of new armored rubber. Nevertheless, by this time the Russian army began a retreat in Galicia, because of which the converted armored vehicles could again remain out of work. In order not to close the interesting project, it was decided to re-equip the armored cars, adapting them for movement along the tracks with the Russian gauge. Several sets of wheel sets were ordered, but the Renault armored car remained without an updated running gear. Due to some features of its design, alteration under a broad gauge was too complex and impractical.

The subsequent fate of the armored car "Renault" Nekrasov-Bratolyubova unknown. Insufficient characteristics did not allow to use it for its intended purpose, and the subsequent improvements did not give any real results. Probably, for some time the armored car on the French chassis stood idle, being unnecessary troops, and then went to the disassembly. In the conditions of a shortage of automotive vehicles, the Russian Imperial Army could not afford to keep the cars in storage with a substantial balance of resources. Thus, by the beginning of the twenties or earlier, the first armored car of the design of the guard, captain Nekrasov, was dismantled.