8 September 2015
16
In an effort to gain a foothold in the international market for weapons and military equipment, Poland is attempting to cooperate with foreign countries in the field of creating new models. A few days ago at the MSPO-2015 exhibition in Kielce, the latest results of such cooperation were demonstrated. Two new self-propelled artillery mounts were presented to the attention of specialists and the general public, which included foreign-made chassis and combat modules.


Both new machines, Krab and Diana, belong to the class of tracked self-propelled howitzers of 155 mm caliber and are designed to equip artillery units of ground forces. They have some common features related to armament and airborne equipment, but they are very different from each other. Being developed by different organizations, the two Polish self-propelled guns are now competitors and are likely to become opponents in any foreign tender in the future. In addition, we can expect the appearance of a contract for the supply of equipment to the Polish armed forces.

Creation of ACS projects based on new chassis was associated with some problems. For various reasons, development companies were forced to change the type of the intended chassis and gun turret, which changed the look of the entire project. However, MSPO-2015 from 1 to 4 September showed two prototypes. 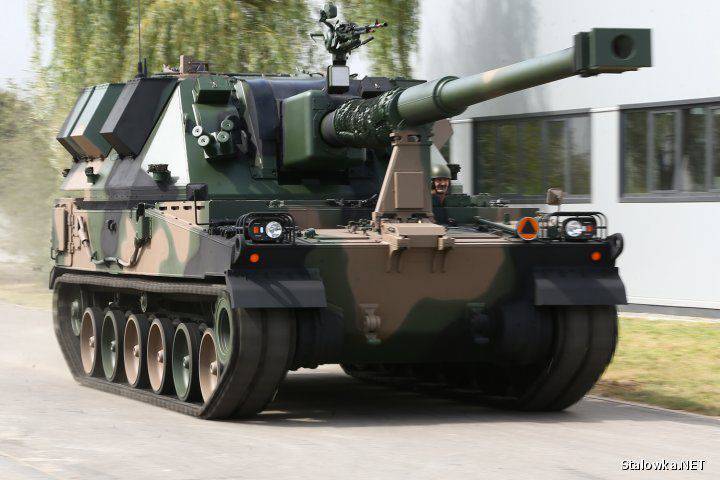 Sauk Krab on the chassis of the South Korean production

In recent years, the Krab ACS project has faced serious problems, which, in particular, has caused the mass production of such machines to stop after the assembly of the first batch. Two experienced and the first six self-propelled self-propelled crab "Crab" were built on the basis of the UPG tracked chassis, which is a modified version of the T-155 Firtina ACS chassis of the Turkish company OBRUM. The main difference between the UPG chassis and the base version was in the type of engine: Polish chassis were equipped with S12U motors from PLZ Wola. The first eight Krab war machines were handed over to the customer by the fall of the 2012 of the year. To date, it was planned to build at least two dozen self-propelled guns.

The assembly of the latest 16 ACS was disrupted. By the time the construction of this technology began, it turned out that the last S12U engines had left the assembly line in 2009 year, and the PLZ Wola plant had closed. In addition, during operation, it became clear that such a power plant has insufficient characteristics. It was proposed to equip the UPG chassis with a new German-made engine, but the engine of sufficient power demanded serious processing of the hull.

To solve this problem, the Polish Defense Ministry and the HSW company (Huta Stalowa Wola), which developed and built the Krab self-propelled guns, were forced to seek help from the South Korean industry. As a new chassis for the Krab ACS, a tracked vehicle designed for the K9 Thunder self-propelled gun was chosen. Last December, HSW and Samsung Techwin signed a contract for the construction of similar chassis in the number of 120 units. The total cost of the ordered equipment is about 300 million USD. 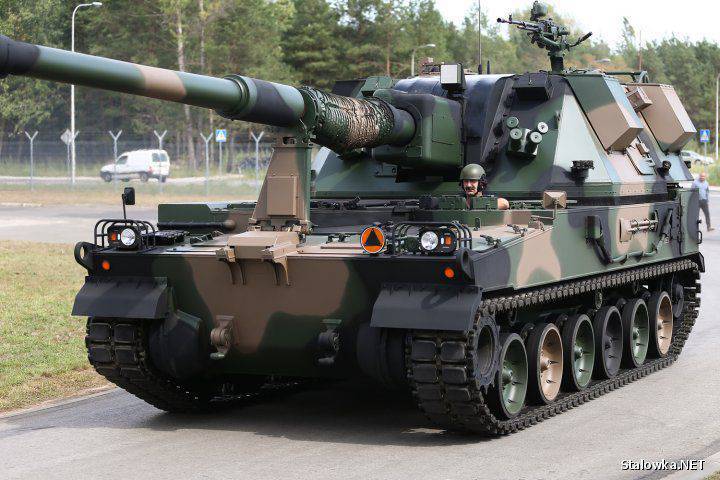 The armored vehicles chosen by the Polish industry have a classic for ACS layout with a front-mounted engine compartment and shoulder strap towers in the stern. The chassis has six track rollers with individual hydropneumatic suspension on each side and a front drive wheel. The chassis are equipped with MTU-811 KA 500 diesel engines with 500 horsepower. In the case of the basic self-propelled gun K9 Thunder, having a combat mass at the level of 47 t, this power plant provides the maximum speed of 67 km / h and good mobility on rough terrain.

It is known that in 2015, Samsung Techwin should hand over two ordered chassis to HSW. The first car was shipped in June of this year, on its base they built an ACS, shown at a recent exhibition. In 2016 and 2017, the South Korean company will build and transfer the chassis to the customer 22, another 12 will be assembled in the 2018 year. On this supply from South Korea will stop. In accordance with the agreement, Samsung Techwin will transfer to HSW all the necessary documentation, so that it will be able to expand the licensed production of the necessary equipment. In 2018-22, it is planned to build an 84 chassis.

The first chassis for the updated "Crab" was sent to Poland on June 25. In July, the Polish company received this car and began assembling a prototype of the new ACS. Its construction was completed in mid-August. 24 August was rolling out this sample. A week later, he was shown at MSPO-2015. 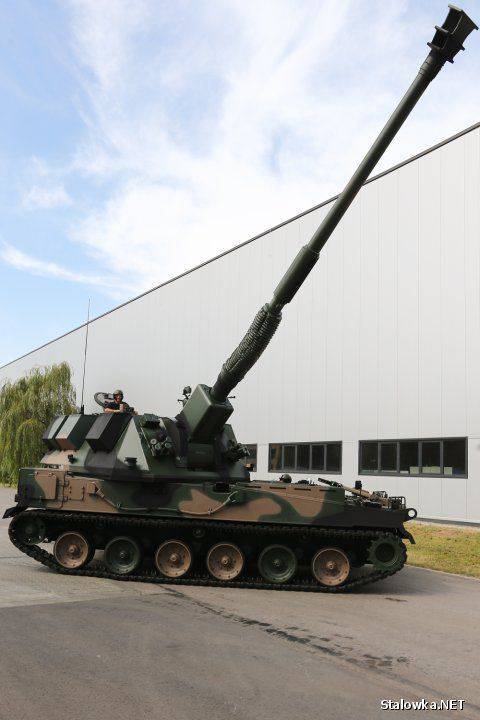 If in the near future no serious problems are identified, then in the foreseeable future, the execution of the order of the Polish army can be resumed. Thus, over the next few years, the Polish armed forces will receive the required number of new ACSs of "domestic" development, ordered several years ago.

It should be noted that in the new configuration of ACS Krab really is not a fully Polish development. The fact is that the tower of this combat vehicle is a licensed version of the British product AS90, created by Vickers about three decades ago. The artillery part of the machine also has import origin. The 155 mm caliber cannon with a 52 barrel length and its rocking installation are made by the German company Rheinmetall. Thus, the Krab ACS in its new form is a British tower with German guns, installed on the South Korean chassis. The role of Polish enterprises in the creation of the project is small and is associated mainly with the assembly of various units.

The Bumar Labedy enterprise was involved in the construction program of the first serial ACS Krab. It was this plant that built the chassis of the Turkish development with Polish engines. After the cessation of deliveries of the discontinued S12U engines, the plant was left out of the program for the creation and construction of a promising Polish self-propelled gun. Nevertheless, the management of Bumar Labedy decided to continue work in the field of self-propelled artillery and to this end enlist the support of foreign colleagues. 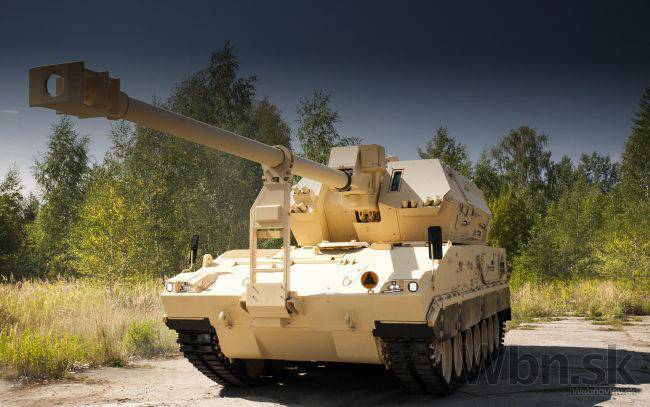 Not so long ago, the Bumar Labedy plant signed an agreement with the Slovak company Konstrukta-Defense, which develops artillery systems. The joint project involves the use of the upgraded UPG-NG chassis with the existing gun turret. This Polish-Slovak-Turkish combat vehicle was named Diana. It is worth noting that the agreement on the development of the Diana project was signed just a couple of months ago - in mid-June.

As part of the new Diana project, Bumar Labedy is responsible for the production of the UPG-NG chassis. The upgraded version of the tracked chassis has some differences from the basic version, but it is equipped with an engine of the same type. As before, it is proposed to use the S12U diesel engine. Probably, the manufacturer of the chassis has some plans for the resumption of production of these products, discontinued at the end of the last decade.

It is proposed to install a gun turret from the wheeled ACS Zuzana 2 of the Slovak development on the base chassis of the self-propelled gun. Armament is similar to the "Crab": 155-mm gun with a barrel length 52 caliber. In this case, the tower, apparently, retains the entire set of equipment for targeting and fire control, created for the base self-propelled gun on a wheeled drive. 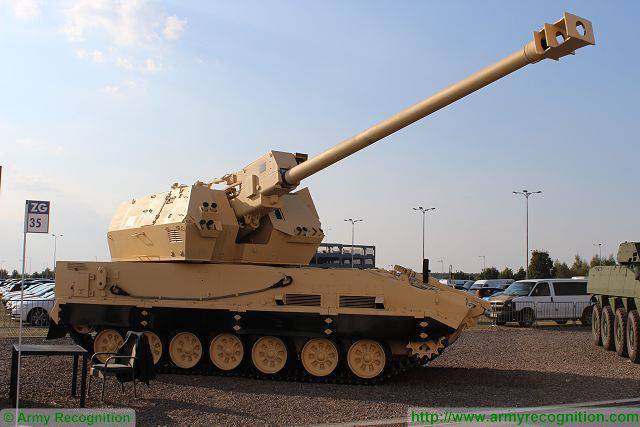 SAU Diana at a recent exhibition

According to foreign media reports, the main reason for the creation of the Diana project was the desire of the two companies to take part in the protracted Indian tender for the supply of promising self-propelled artillery installations. In addition, representatives of the Slovak company claim that their new ACS has already interested three other potential customers. Who exactly is interested in the new tracked self-propelled gun, has not yet been reported.

The Diana project involves the use of existing components, which accordingly affected the timing of its implementation. According to reports, the assembly of a prototype of a new self-propelled gun ended in the twentieth of August. Just a few days after leaving the assembly shop, the car was sent to MSPO-2015.

Two new self-propelled artillery mounts, developed in the shortest possible time, were manufactured at the end of August, and in the first days of September for the first time became exhibits of the exhibition. Future prospects self-propelled guns Krab and Diana are still unknown. Available information on the progress of these projects allows us to make some assumptions, but they may not be justified. It can be assumed that the emergence of the Crab ACS on the new chassis will allow the construction of serial equipment to continue and to equip the Polish ground forces with the necessary number of vehicles. In the future, the appearance of an export contract is also possible. 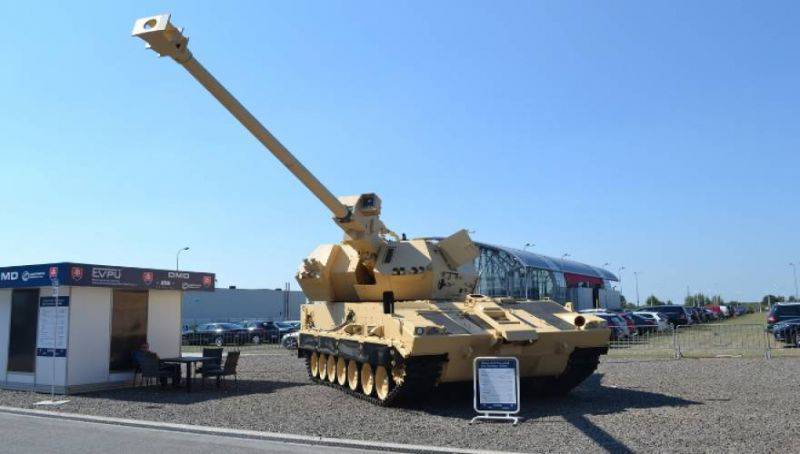 Prospects Diana fighting vehicle look worse. The wheel self-propelled gun Zuzana 2, created a few years ago, still has not become the subject of the contract. Self-propelled guns of the basic model Zuzana were built serially and were supplied to some customers. The upgraded version of this machine, in turn, has not interested anyone yet. Thus, there is reason to doubt that the Diana tracked combat vehicle will be able to attract the attention of customers and get to mass production.

Thus, at a recent exhibition, two models of Polish-made military equipment were demonstrated, the fate of which may be very different. One of the new combat vehicles can reach mass production and fall asleep in the troops, while the future of the second is still uncertain. Nevertheless, both Krab and Diana demonstrate a curious approach to the development of military equipment in the absence of the required domestic production units. Turning to foreign colleagues for help, HSW and Bumar Labedy were able to create interesting combat vehicles.