CITE Project: a city without people

8 September 2015
9
Any new technology or technology must be tested in a laboratory or testing ground. During the tests, the advantages and disadvantages of the new development are identified, and the main features of its operation are determined. Such checks should pass all new ideas and developments, regardless of the scope of their application. For testing new technologies, various polygons are used, adapted for solving various tasks. In the foreseeable future, a new testing ground should appear, designed to check promising proposals for various urban infrastructures, etc.


The American company Pegasus Global Holding has completed the basic preparatory work for its new project test site. In late August, it was announced the start of preparation for the construction of the test site. Construction of the Center for Innovation, Testing & Evaluation (CITE) complex should start in the near future in one of the districts of New Mexico, near the city of Las Cruces. On the area around 26 square. Miles (about 68 sq. km) there will be a real city, which, however, will be used as a testing ground for testing various new technologies. The construction is planned to spend about four years. The total budget for construction is 1 billion dollars.

The CITE complex, as conceived by the creators, will be used to test various ideas and proposals regarding the development of urban infrastructure. In addition, the possibility of using the landfill as a platform for practicing humanitarian operations techniques is noted. The similar purpose of the landfill affected its appearance. As planned by the creators, a full-fledged city should be built in the desert, divided into several areas and having all the necessary infrastructure. For obvious reasons, the new city of CITE will not be populated. 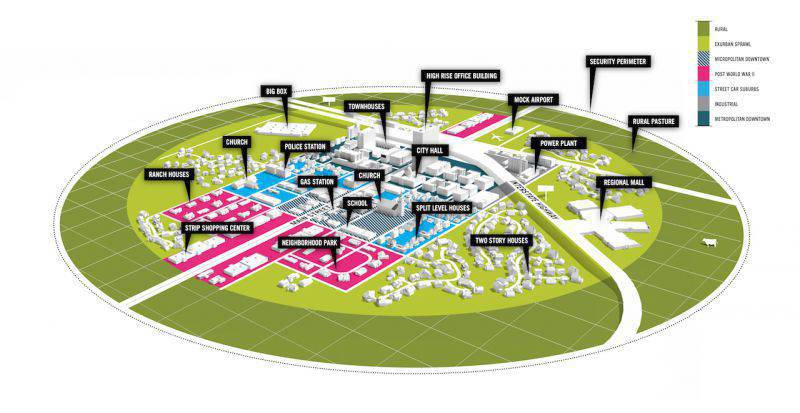 The creators of the project note that different cities are seriously different from each other. The construction of each city is carried out taking into account the existing environmental conditions, economic characteristics and other factors. For this reason, CITE will not be able to imitate any city in the United States, let alone localities in other countries. However, when creating the project, it was decided to base the typical American city. The actual prototype of the CITE test site was the city of Rock Hill (South Carolina), on the basis of which all elements of the new complex were developed.

Such a prototype was chosen for a number of reasons, primarily because of a rather large stories and features of the building. The city, taken as a basis for the landfill, was built and rebuilt for a long time. As a result, it has buildings and infrastructure elements made with different time technologies and from different materials. A similar situation is observed in the vast majority of American cities. According to Bob Bramley, the executive director of the development company, a city must have a layer of new technologies on several layers of old ones: in other words, we need both optical fiber and copper cables.

The project of a special landfill CITE involves the construction of a full-fledged, but uninhabited city, which can live up to 33-35 thousand people. The landfill will be divided into several zones. So, in its central part will place a kind of historical center with infrastructure facilities. In this part of the complex there will be “fake” city administration, a business center, schools, churches, a police station, a gas station, residential buildings and some other objects. At the same time, however, there is no hospital in the project. The reasons why such an important object is missing in a fake city are unknown.

Next to this “historical center”, several small suburban settlements, a city park, a ranch, a power station, an airport, shopping centers and other objects will be built. Also through the landfill pave a major highway. A curious feature of the project is the use of different materials and construction technologies in different urban areas. For example, the building of “old” areas will correspond to the pre-war period. Moreover, there will be garbage, graffiti, vandalism, etc. in the city.

The overall structure of the CITE complex is divided into several main areas. In the center of the landfill will be the city itself with all the necessary objects. In the immediate vicinity there is a suburban area, and beyond its borders there is a rural area. Such a structure is typical for most American cities, which is expected to allow testing of new ideas with greater efficiency.

It is noted that the CITE landfill will receive not only various buildings and buildings, but also all related communications. The city-landfill will be electrified, the project also provides for water supply and sewerage. A little non-standard element of the infrastructure of the city should be a means of tracking the situation. Since it is planned to test various new ideas on the basis of a uninhabited city, special equipment is needed to monitor the situation.

As a result, the CITE complex should become a full-fledged small city in which all residents disappeared, but the work of the infrastructure continued. Such an image of the landfill will allow it to be used as a universal platform for testing new ideas.

About all 300 people will manage the work of all urban systems. Testing sites will be located in special underground rooms in different parts of the test site. The staff of the landfill will be able to monitor the operation of all systems, as well as manage them. In addition, a system of registration of all parameters will be used, with the help of which information will be collected on the course of testing of one or another equipment or idea.

Pegasus Global Holding claims that the CITE complex will be available to all commercial, state and non-profit organizations that need to test new ideas and technologies in a real city, even if it is uninhabited. It is clear that for some tests it will be necessary to modify the buildings or infrastructure of the landfill accordingly, but it is much easier than doing the same in a real city.

It should be noted, news The construction of the CITE test facility does not appear for the first time. The upcoming construction of this landfill was first reported back in 2012 year, but then, for a number of reasons, work was suspended indefinitely. Since that time, the company-developer has clarified the location of the future landfill and bought the necessary land. In addition, some features of the project were reworked. As a result, construction can be started before the end of this year, and the total cost of the project is estimated at 1 billion dollars. Interestingly, much smaller figures appeared in 2012: the total cost of construction was then estimated at 200-250 million dollars.

It is expected that the commissioning of a new landfill will simplify the verification of new technologies related to urban infrastructure, as well as timely identify existing problems and fix them before the full operation begins. The management of Pegasus Global Holding believes that the CITE test site will make it possible to sift out offers that on paper promise benefits, but may be too complicated and expensive in real conditions. In addition, checking and fine-tuning in the conditions of the landfill will avoid problems in the future.

From the official statements of the development company, it follows that the CITE testing ground will become a unique complex, which will allow to solve a lot of problems and ensure effective testing of new ideas aimed at improving life in the city. However, a promising project has already been criticized. Some features of the new complex raise questions.

An interesting opinion in her publication was expressed by Nicole Ferraro, the editor-in-chief of UBM's Future Cities architectural online publication. In her opinion, the construction of a special testing ground for testing new technologies does not make sense. She believes that the main problem of the CITE project is the absence of people who could interact with the city's infrastructure: without them, it is impossible to get full-fledged data on the work of various systems. Criticizing a promising project, N. Ferraro makes his proposal. If Pegasus Global Holding needs a city with outdated infrastructure for testing, then why build a new expensive complex when you can invest a billion dollars in Detroit?

In addition, the new project raises doubts of a different nature. The CITE complex should completely imitate a small town with all its features. Naturally, such a feature of the project could not but become the ground for the appearance of rumors and ambiguous versions. Indeed, at the moment it is impossible to assert with confidence that the CITE landfill will be used only by commercial organizations and other structures responsible for the construction and operation of urban infrastructure.

An exact copy of a small city may, at a minimum, be of interest to the army and private military companies. In this case, the complex can be used as a training ground for training personnel in conditions as close as possible to real ones. This version has the right to life, but does not yet have sufficient evidence. For example, the Russian news agency Regnum gives only one indirect argument in favor of this version. Pegasus Global Strategic Solutions, one of the divisions of Pegasus Global Holding, is a major developer and supplier of various electronic equipment for the US military. Thus, the CITE project can be developed and taking into account the wishes of the military.

It is possible that the Center for Innovation, Testing & Evaluation complex is indeed a dual purpose project, but there is no direct evidence of this yet. At the moment, the new development of Pegasus Global Holding looks like a very interesting way to check and refine new proposals relating to various aspects of urban life. Nevertheless, the real benefits of the project still remains a cause for controversy. CITE complex will be put into operation only by the end of the decade. To these dates should be added the time required for the first tests. Thus, the first return on the project will appear only at the beginning of the next decade. As a result, it is too early to talk about the real prospects of the new test site and the benefits of it. Whether the CITE project will be able to justify the hopes placed on it - time will tell.