The session promises to be hot, not only in connection with events in the world, different regions of which are either already immersed or are actively plunging into chaos, but also due to the fact that at the jubilee session representatives of UN member states not burdened by sovereignty come up with a proposal conduct, no less, the reform of the Security Council. Interestingly, these non-burdensome about reforming themselves guessed or suggested who? .. The tip was ... 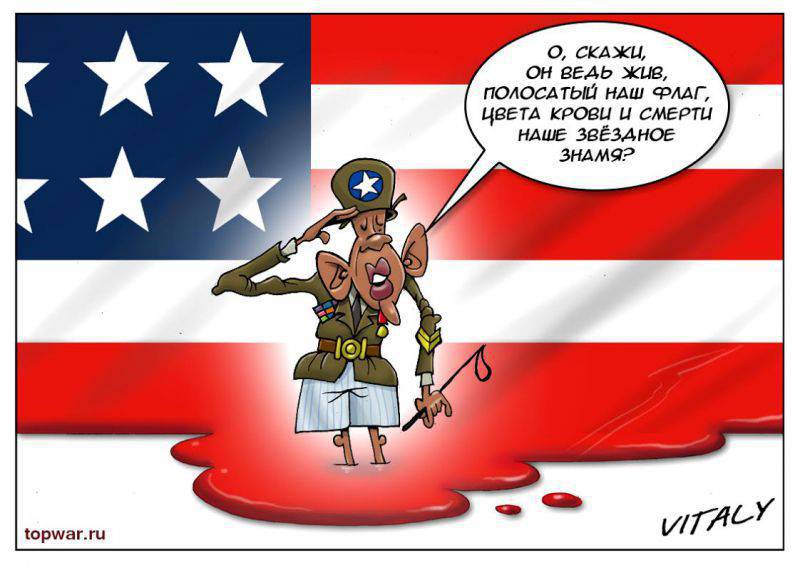 The fact that the hint for the unencumbered came “from above” is evidenced, for example, by the interview of Mr. Poroshenko to the Voice of America journalist. The President of Ukraine announced that the reform of the UN Security Council, in principle, can fit into one “reform” - depriving the veto of the Russian Federation ... At the same time, Poroshenko is “magnanimous” more than ever - according to him, it’s not necessary to exclude Russia from the UN Security Council let it remain, but without veto power ...

Poroshenko is not the first politician to "rule" countries deprived of a large "partner" of independence, stating the need to reform the UN Security Council by depriving Russia of its veto. Before Poroshenko, the puppets from the “solar” Baltic said the same. Moreover, Poroshenko and his Baltic colleagues refer to the fact that Russia, they say, repeatedly violated the UN Charter, showed aggression, and vetoed exclusively correct and humanistic resolutions. Like, let's take and deprive the veto of the Russian Federation during the jubilee session of the General Assembly, and the UN will immediately turn into a workable organization, and the world will become calmer and lighter ... Well, of course ... Be sure to turn, and how else ...

In order for the initiative to have at least some signs of the probability of incarnation, a chorus of "unencumbered", including Mr. Poroshenko - well, like the initiative "from below" - from "humiliated and insulted" by Russia was connected to its sound Moreover, the real ideologists of depriving Russia of the right to veto in the UN Security Council, apparently, are going to rely on the fact that in the new military doctrine of Ukraine there appeared a description of Russia precisely as an “aggressor”.
The idea of ​​“friends” of Russia is approximately as follows: for a possible deprivation of the Russian Federation of the veto’s rights (that is, they are author’s notes) we will rely on the DOCUMENT, which means the “fact” of Russian “aggression” - on the letter of the Ukrainian military doctrine and on the decisions of of the institutions of "power" of Ukraine on recognizing Russia as an "aggressor". They say, well, here is the proof — Pyotr Alekseevich wrote in black and white a “lawlessness” on the part of the Russian Federation in the doctrinal document, with which it is necessary to put an end to “the whole world community” once and for all ...

The most interesting thing is that when considering the issue of “reforming” the UN Security Council, Kiev, which is an outspoken tool to achieve the interests of the West (and specifically the US), is going to “appeal” to United Nations conventions. Well, if, in order to put pressure on Russia, our "friends" are going to recall the Charter and the United Nations conventional array, then why should Russia not arm itself with the same non-lethal weaponsby removing it from the fuse.

So, Russia is designated an “aggressor”, and on this basis “a proposal has been received” to withdraw from among those representatives of the UN Security Council who have veto power, for, you see, “aggression” of Russia, you see, violates the UN Charter and a number of conventions. In this case, it is worth referring to the fundamental convention in this situation, which defines what “aggression” is in general, and what are the aspects of the extension of this term to certain situations in the world. This is a convention fixed by the UN General Assembly Resolution 3314 of December 14 of 1974. It is necessary to dwell on it in more detail.

It its full version, and here you can bring excerpts:

General Assembly,
based on the fact that one of the main objectives of the United Nations is the maintenance of international peace and security and the adoption of effective collective measures to prevent and eliminate threats to peace and to suppress acts of aggression and other breaches of peace, (...)
Reaffirming also that the territory of a state is inviolable and that it should not be subject, even temporarily, to military occupation or other measures of use of force taken by another state in violation of the Charter, and that it should not be subject to acquisition by another state as a result of such measures or threats of their use, (...)

Approves the following definition of aggression:

Art.1
Aggression is the use of armed force by a state against the sovereignty, territorial integrity or political independence of another state, or in any other way incompatible with the Charter of the United Nations, as defined in this definition.
(...)

And this x.NUMX same convention:
Nothing in this definition, and in particular in Article 3, can in any way prejudice the right to self-determination, freedom and independence of peoples arising from the Charter ...

And on the basis of the points of this document, is someone trying to blame Russia for aggression against Ukraine? They say that the Russian Federation (armed forces) invaded the Crimea, sends mercenaries to the Donbass, occupies, etc., etc.

Interesting, interesting ... But, first, Russia did not invade Crimea for the simple reason that between Russia and Ukraine there was an agreement on the presence in the Crimea of ​​military personnel of the Russian Army (the number indicated in the document is up to 25 thousand). Secondly, the phrase “sends mercenaries to the Donbass” has no legal force, since the LDNR militia, including Russian citizens, do not act in the Donbas on behalf of the state (for comparison, see paragraph g of Article 3 of the convention). And, thirdly, the article 7 of the same document says that the right of peoples to independence and self-determination is a right that is, as it were, above all definitions of aggression. Crimeans made their choice - the territory of the peninsula from the many years of unlawful possession of Kiev by it (possession in violation of the legislative base of both the USSR and the Crimea and Sevastopol) was released, and therefore article seven of the document, like the UN Charter, was fully complied with.

And if someone from the “friends” is very itchy to speak, as they say, “for aggression”, then such people should read the UN Charter, the same convention more carefully, and then compare the letters of these documents, for example, with the following facts:

1954 year - operation PBSUCCESS. US military invasion of Guatemala, organized by the CIA. In the operation to overthrow the government of the country, which tried to pursue an independent policy from the United States, about $ 20 million were invested (materials by O.N. Glazunov). At the same time, the American media, at the request of Washington, called the bloody operation in Guatemala “internal problems of the pro-communist regime.” Internal problems with an external solution? ..

1981 year - the beginning of the US campaign and the "allies" in the so-called contras in Nicaragua (Nicaragua for 9 years of confrontation kills more than 50 thousand people, economic losses - about 4 billion dollars, an increase in external debt almost 10 times).

1983 - The United States actually leads a coalition of states intervening in Lebanon. It is the invasion of American forces that leads to the bloodiest phase of the civil war in the country.

Same year 1983 - Operation “Urgent Fury” (“Outbreak of Rage”). This is the US invasion of Grenada with a formal statement about "helping Grenada to stabilize the situation in the country." The real goal is the occupation of the island and the overthrow of the pro-Soviet power with the execution of the head of government Maurice Bishop. Executions of disagreeable leaders, either on behalf of local residents or on behalf of international courts (spontaneous or perpetrated after “judicial” decisions) and subsequently will become a kind of calling card of the US invasion of foreign states (Iraq and Libya as examples, Yugoslavia can also be attributed to how Milosevic "died" in prison). 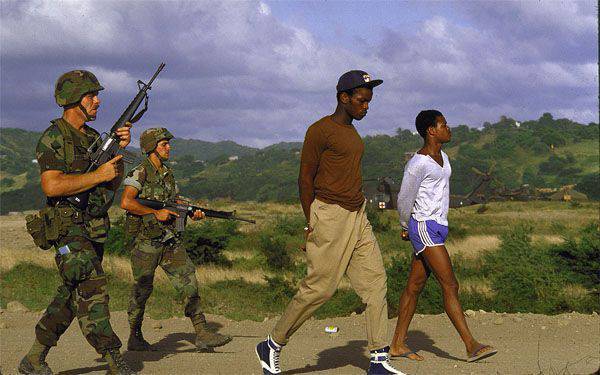 1986 year - Operation "Canyon Eldorado." The bombing of Libya by American aircraft. The bombing was preceded by accusing the Libyan authorities of Washington in support of international terrorism.

1988 year - Awarding the captain of the US missile cruiser USS Vincennes, from which the missile was launched on a passenger airliner Iranian airline. The attack killed 290 people.

1989 year - Operation “Just Cause”. As part of a true “right cause” of December 20, the United States invades Panama under the slogan, which then became exploited on an ongoing basis - “the restoration of democracy”. Democracy Washington began to "restore" due to the fact that the authorities of Panama began to conduct a foreign policy course that is not dependent on the United States and aimed at ensuring that the Panama Canal belongs to Panama. 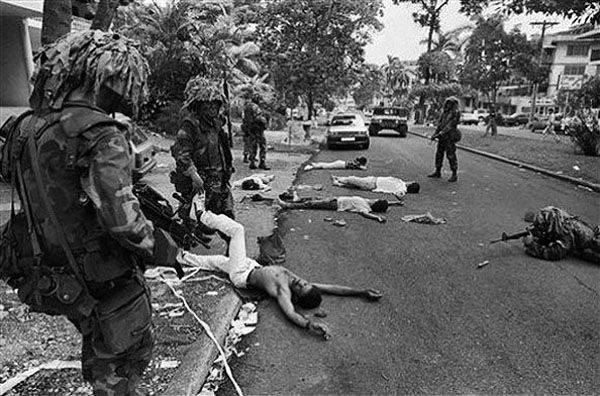 1991 year
- US invasion of Iraq and Kuwait. The total number of the coalition, which for the invasion was made by the States, reached almost 720 thousand people. The losses of Iraq (the largest among civilians) exceeded 100 thousands of people! 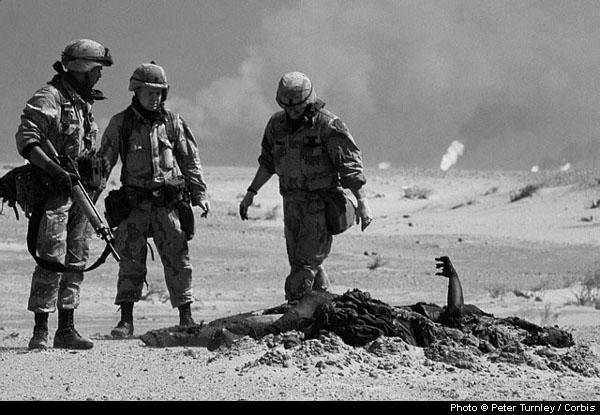 And also - the invasion of Yugoslavia, Angola, Haiti, Rwanda, Afghanistan, a new invasion of Iraq and Libya, support for international terrorism in Syria. And even this list is only a small part of those aggressions, which the representatives of the state, striving to accuse the Russian Federation of aggression through their puppets of aggression, showed against foreign countries. The USA looked in the mirror for a long time? .. Although in Washington even the mirror seems to be exceptional ...

Ctrl Enter
Noticed oshЫbku Highlight text and press. Ctrl + Enter
We are
10-th anniversary exhibition Russia Arms Expo will be held in Nizhny Tagil in SeptemberSituational analysis of the death of the MH17 flight (Malaysian Boeing 777), made on the basis of engineering analysis from 15.08.2014
27 comments
Information
Dear reader, to leave comments on the publication, you must to register.