The Ukrainian government is more responsible for the conflict than the far right ("The Guardian", UK) 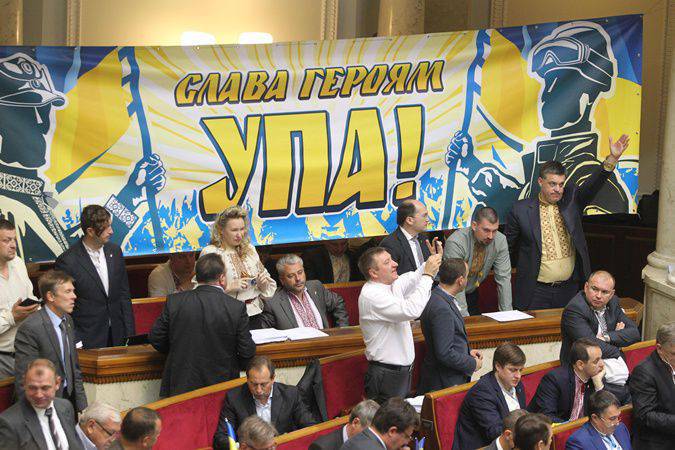 The issue of autonomy of Donbass split the fragile coalition, but the government should start looking for solutions and not blaming paramilitary formations

This week, a serious collision occurred near the parliament building in Kiev during protests against constitutional changes, which, if adopted, could provide more autonomy to pro-Russian separatists in eastern Ukraine.

The changes proposed by President Petro Poroshenko could lead to the decentralization of power in Ukraine, allowing local governments in "certain areas of the Donetsk and Lugansk regions" to be guided by a separate law.

These proposals, which the United States and the European Union supported, should have become part of the promise given in the Minsk Peace Agreement to give “special status” to the areas held by the pro-Russian militia in order to end the ongoing conflict in eastern Ukraine.

However, in reality, these constitutional amendments have practically nothing to do with the agreement signed in Minsk. Poroshenko’s proposal was not approved by either the separatists or the Kremlin. In fact, it does not give any “special status” to the separatist regions, and any specific details of the order of autonomous administration in the Donbass can later be revised by a simple majority vote in the Ukrainian parliament.

In addition, the so-called "decentralization" is accompanied by the strengthening of presidential control over local governments through centrally appointed "prefects" with broad powers.

The ultra-right Svoboda Party, the Right Sector and some parties that are part of the current coalition government criticized the proposed changes, calling them “capitulation” to Russia, and on Monday the protests in Kiev turned bloody after the unknown some reports, it was one of the members of the ultra-right battalion called "Sich" - threw a hand grenade into a dense police system.

According to the Kiev government, more than 130 law enforcement officers were injured, and three soldiers of the National Guard - all of them were drafted into the army recently - died from their wounds.

The Sich Battalion, created with the support of Freedom, is one of many battalions formed last year to fight Russian-backed separatists in the east of the country.

However, in an interview with Sky News on Wednesday, September 2, Poroshenko said that in fact it was Russia that was responsible for the death of these people. The president stressed that the incessant Kremlin "campaign of destabilization" was to blame for everything, despite the obvious evidence that supporters of the ultra-right nationalists staged a clash with the police.

After the clashes, representatives of the Svoboda party stated that everything that had happened was a planned provocation to discredit the “patriots”, while pro-government groups and the liberal Ukrainian public, in turn, succumbed hysterically and accused the Svoboda party of the soldiers' death.

Some representatives of left-wing parties were quick to remind the liberals - in a tough form, "we told you so much" that they warned many times about the risks of long-term cooperation with the ultra-right, and this surge of violence, in their opinion, is quite an expected result.

But, as usually happens in tragic cases, emotions become selective. Throwing a hand grenade into a dense crowd can hardly be called the most terrible act of violence that has occurred in Ukraine lately. Far more terrible atrocities are committed almost every day in the Donbas by “ordinary” people on both sides of the conflict.

However, during a war, violence often becomes habitual, especially when it happens far from home - and far from Kiev. However, war takes on new meaning when angry and armed veterans return, feeling betrayed by the government.

Although right-wing parties, such as Freedom and the Right Sector, did play a significant role in Euromaidan protests in 2013, later increasing their resources and creating their own armed groups, they could not enlist the support of the general public.

Today, they simply react to events, rather than provoke them. Even in clashes on Monday, Svoboda only tried to win political points on the eve of local elections in the hope that their statements about “national betrayal” would help them increase the number of their supporters. They hardly seriously planned an armed attack, they simply could not control their extremist supporters in the crowd.

Although the government has already used the clash on Monday to discredit Freedom as irresponsible politicians, it remains to be seen whether it will now attempt to suppress the extreme right.

However, an even more pressing question is whether the government has the necessary means to suppress the ultra-right, given the growing number of armed formations loyal to them.

As shown by the clash in Mukachevo, a city in western Ukraine — where the Right Sector fighters provoked a conflict with law enforcement agencies that killed seven people — when the extreme right has several thousand armed people who can challenge the state monopoly on violence, they can call to open rebellion against the state and, nevertheless, to remain practically unpunished, how strong is the government?

Meanwhile, while the government is looking for the guilty, the coalition is crumbling. The Populist Radical Party withdrew from the government because of the draft law on decentralization.

In addition, the collection of votes in parliament for the final approval of changes to the constitution was impossible without the support of the Opposition Bloc, the successor of the Party of Regions, Yanukovych - a very symbolic fact that will give the ultra-right more reasons to attack the government for betraying the "revolution" Euromaidan.

As a result, an extremely frightening situation may arise in Ukrainian politics, when the main alternative of the right-wing nationalist government will be the ultra-right and ultranationalist opposition.

Ctrl Enter
Noticed oshЫbku Highlight text and press. Ctrl + Enter
We are
Minsk "Surprise"Situational analysis of the death of the MH17 flight (Malaysian Boeing 777), made on the basis of engineering analysis from 15.08.2014
16 comments
Information
Dear reader, to leave comments on the publication, you must to register.