From division to synthesis 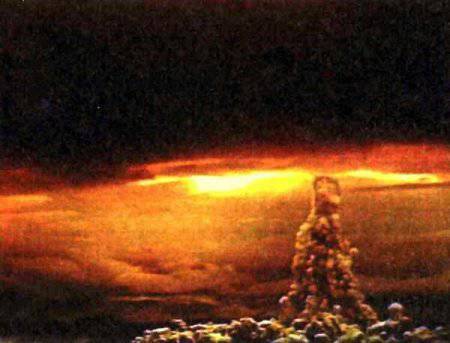 During the time that has passed since the first test in Alamogordo, thousands of explosions of fission charges thundered, in each of which precious knowledge was obtained about the features of their functioning. This knowledge is similar to the elements of a mosaic canvas, and it turned out that the “canvas” is limited by the laws of physics: reducing the size of the ammunition and its power puts the limit on the kinetics of slowing down neutrons in the assembly, and the achievement of energy release, significantly exceeding a hundred kilotons, is impossible due to nuclear-physical and hydrodynamic limitations of permissible sizes of the subcritical sphere. But it is still possible to make ammunition more powerful if nuclear fusion is forced to work along with fission.

The largest hydrogen (thermonuclear) bomb is the Soviet 50 megaton “tsar bomb” exploded on October 30 1961 on the Novaya Zemlya test site. Nikita Khrushchev joked that initially it was supposed to blow up a 100 megaton bomb, but the charge was reduced so as not to break all the windows in Moscow. In every joke there is some truth: constructively, the bomb was really designed for 100 megatons, and this power could be achieved by simply increasing the working medium. They decided to reduce the energy release for safety reasons - otherwise the landfill would be damaged too much. The product turned out to be so large that it did not fit in the bomb-bomber of the Tu-95 carrier plane and partially stuck out of it. Despite the successful test, the bomb did not enter into service; nevertheless, the creation and testing of the superbomb was of great political importance, demonstrating that the USSR had solved the task of achieving virtually any level of megatonnage of a nuclear arsenal.

Heavy hydrogen isotopes serve as fuel for the synthesis. At the fusion of deuterium and tritium nuclei, helium-4 and a neutron are formed, and the energy output is 17,6 MeV, which is several times more than the fission reaction (in terms of the mass unit of the reactants). In such a fuel, under normal conditions, a chain reaction cannot occur, so that its quantity is not limited, which means that the energy release of a thermonuclear charge does not have an upper limit.

However, in order to start the synthesis reaction, it is necessary to bring together the nucleus of deuterium and tritium, and the Coulomb repulsion forces interfere with this. To overcome them, you need to accelerate the core towards each other and push it. In the neutron tube, when a stall responds to high-voltage ion acceleration, large amounts of energy are expended. But if you warm up the fuel to very high temperatures of millions of degrees and keep its density for the time required for the reaction, it will release much more energy than that spent on heating. It is through this method of reaction and weapon became known as thermonuclear (fuel composition such bombs are also called hydrogen).