Notes of the Colorado Cockroach. Return of the prodigal

8 September 2015
32
Never say never". Never give up drinking Monday morning. For quite a long time I held on, but alas, the desire to share what I saw and heard overcame. So forgive me, but here I am again drawn.


When I said goodbye, leaving Kiev, I didn’t even think that I would be back soon. Yes, I visited the Crimea, breathed free sea air. There was a little northeast. And now two weeks ago I returned. All this time, going with thoughts, compared to what he saw. I thought. Analyzed

Well, miss, my dear readers. Straight paws itch from the desire to talk about his "odyssey." But, on the other hand, this is not particularly modest. Because I will tell in parts. The main thing is that I am again at home. Again in the thick of the Ukrainian events.

The first thing that strikes after a long absence is that among the masses of the Ukrainian people there is a complete “discord”. Yesterday's "svidomye" today, the worst enemies. And vice versa, the enemies of yesterday are today best friends. Sodom and Gomorrah were not the cities, but the younger group of the kindergarten compared to the current Kiev.

For example, I will talk about the "mezhdusoboychik" Arseny Kulyavloba and Mikhail Odessa. Many somehow do not attach any importance to this. But an interesting picture emerges. Straight pictures in the style of Kukryniks. Arseny is still in force, but he already understands that he will soon be thrown off the premier’s chair. And only one money "lard" celebrated. I would like the second, and then the third. So the most prominent prime minister is "spinning" to the fullest. As a vacuum cleaner sucks everything in its path.

On the other hand, the Young Ukrainian Odessa. Rating "raises." Tagged into the chair hatched. By the way, in vain, I suppose. The next buttocks that this chair will be warming will be women ... Some of ours speak of a “lady with a slant artificial”, but it seems to me that those fed on American hot dogs are more likely. But more about that later. Now about the slap in the face of Michael. Just quote, and all ... Then we'll see.

"In the statement of the Prime Minister, the reference to my nationality seemed to me inappropriate. My nationality has nothing to do with it. But I have a question - why the Prime Minister is not doing everything possible for the sake of reform? Why does he not deregulate? Why isn’t personnel being replaced, after all, this is in his authority? More than 100 billions of losses a year were brought by state-owned enterprises, while they continue to work, and work, as we understand, in fact, with a profit. Why do not they privatize these state-owned enterprises, why do they continue to accumulate losses? in the face of it - these state-owned enterprises are under the control of managers appointed by oligarchs and bring them income. "

Such is the caring “Novoukrainets” of Mikhailo. Although, I agree, I wrote correctly. "Oborzel" Kulyavlob strongly. But we will continue to quote.

"According to our calculations, only in July-August the machinations at Odessa customs, organized by the officials themselves, caused damage to the budget for 378 million hryvnia. They took energy customs from Odessa, made the highest indicative figures, in fact, began to redirect cargo to other customs.

I informed the president about this, my words are confirmed by the head of customs Likarchuk. Likarchuk - only the deputy head of the fiscal service, he actually does not manage customs. The adviser to the head of the GFS, Gennady Romanenko Nasirova, manages the customs.

The state apparatus in Ukraine really falls apart, reforms are inhibited, and incompetent and corrupt civil servants do not quit. That's the problem. Therefore, I conclude that the government is not going to meet the reforms, but the oligarchs. The state of the state in the next six months will be critical, and all of this is not because the "followers" are to blame, not because the war is going on, but because the reforms are replaced by imaginary achievements. "

They steal it, there it is in the swing, and most importantly, in "one pocket". Do not share. It's a shame. And the shirts torn by the head of the Odessa Regional State Administration on their hairy chest are running out. And the officials of the "Kulyavlobovskys" cannot be moved from warm places. Offend the patriot of Odessa.

“I’m sure that reforms in Ukraine can be successful, I’m sure that we will be able to win. We have so many wonderful people who are able to make changes right now. We already have something to be proud of. But we need to achieve the achievements that there are today, they have become systemic and have affected all key industries. I’m not going to back down, I work on it every day. But I’m really sad that we are so stupidly losing time. "

Odessa cockroaches now sit in the theater. Not a city, but the Roman Coliseum. And the "gladiators" are no longer funny, but grown-up. But I think everything will end peacefully. Mikhailo will get his “share” and calm down. Not time yet to "merge" Kulyavloba. He did not finish his mission, according to overseas puppeteers.

Vyhegrebushchy chief looks even more stupid. The fact that he is at war with Russia is not even commented on. Even in the countries of "Ukrainian" laugh. How many can be considered all idiots?

So, the new “preoccupation” of Gunpowder is an old sentence for the Crimean terrorists. Well, those that seem like filmmakers.

"President Petro Poroshenko appealed to deputies of the European Parliament with a request to consider Russia's violation of international law and the conclusion of the Ukrainian film director Oleg Sentsov and activist Alexander Kolchenko."

Care, it means. How many were these “concerns” along with “inadmissibility” and “international solidarity”. And the Russians took, proved guilt and held a trial. And they didn’t just hold it, but gave journalists the opportunity to see this court. Brought the "political" process in the criminal plane.

Amused the answer of Europe. The guys there, as you can see, did not miss either. Understand that they are offered to become "clowns." On the one hand, you do not want to, but on the other hand, you need to do something. Then again quote Gunpowder.

"In response to my appeal, the deputies of the European Parliament will hold a special debate regarding the gross violation of the rights of Sentsov and Kolchenko in the Russian Federation."

As my youngest says, Dad, this is rzhaka. Indeed, rzhaka, and even what. And the wolves are fed, and, sort of like, there are still sheep in the flock. I don’t know why all this is done by “Square”, but it seems that some “stimulants” have taken possession of this person’s brain.

And now what awaits ordinary Ukrainians in the near future. So far there are no special speeches, but there will be. Since the Rada spoke. And if the conversation went, we are waiting for a quick solution.

So, soon the Ukrainians will receive a new system of real estate taxation. Proposals have already been developed in the depths of the Ministry of Finance and have already been "issued" on the mountain. " Who needs it, naturally. What we get? By the way, over the last year 14 new taxes and fees, we have already ogrebli.

The tax will now be paid by the owners of all houses, apartments, industrial and warehouse premises. All the benefits and other "social achievements" of the past government on the side. This system will especially appeal to those who own decent housing.

According to the document, apartments of more than 300 square. m and residential buildings area over 500 square. m will be taxed at a fixed rate - 25 thousand UAH per year.

Just remember the great tale of Gianni Rodari. And the way Seminor Tomato and Prince Lemon ended their lives. Something unfortunate for me today. But ... Dilute "merry." Again on a fairy tale. Remember the taxes on rain and air? So, in Ukraine, they have long been there. Ecological tax is called. Mobile pollution, stationary sources, waste disposal, etc. And for the water, too, there is "Zbіr for Viktorastannya Vodi", all in NK with 2011 year.

Well, in order for the Russians to envy the Ukrainians a “white” envy, the last news today.

From 1 next January, the government plans to ensure the process of issuing new ID-cards instead of internal passports. 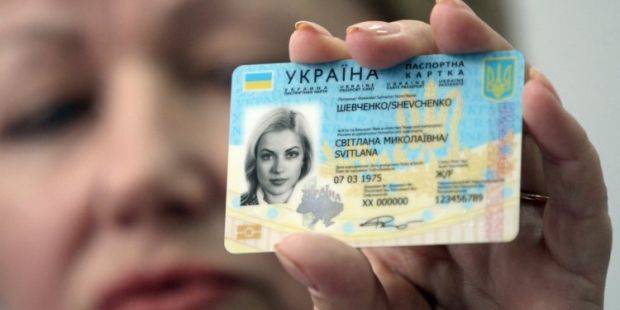 According to an UNIAN correspondent, Prime Minister of Ukraine Arseniy Yatsenyuk reported this in a statement to the media.

He recalled that his meeting with the technical mission of the European Union regarding the introduction of a visa-free regime in Ukraine ended.

According to him, the mission consisted of three blocks.

“The first block was a security block in Ukraine ... The main task that we are facing is to ensure the process of issuing new ID-cards instead of internal passports from 1 in January of next year,” said Yatsenyuk.

Envy. We are now such "Europeans" that already captures the spirit. And you are so ... non-Europeans, in short. The fun continues, Panov.

So, dear readers. A lot of thoughts, a lot of events. There are many forebodings. I want to share. But I will not abuse your time. As my new "Ukrainization" will be writing.

Moreover, we have here the elections on the whiskers ...