He was called "Rheinmetall"

8 September 2015
23
And it so happened that somewhere else in the 70s of the last century, the book “Strike and Defense” of the publishing house “Young Guard” fell into my hands, in which, in addition to stories about armored vehicles, memories of veterans of tank troops were also placed. One of them described his meeting with the German tanks... "Rheinmetall", which took place in 1942, and the tanks themselves were painted yellow-brown. He immediately remembered their performance characteristics, which he studied at the school, ordered to load with armor-piercing, shot and knocked out ... Then I did not know anything about the Wehrmacht tanks, which were armed with two guns at once - 75 and 37 mm and I really wanted to learn more about this machine. This "craving for knowledge" was stretched for more than one year, I even had to write to the tank museum in Münster, but in the end, everything that I wanted, I learned.

So, the tank named in that book “Rheinmetall” was really designed and built by this company in 1933. At the same time, two tanks numbered №1 and №2 were made not from armor, but from ordinary steel, that is, in fact, they were mock-ups, although they were running. Armament was also present at them, but only they could not fight and were subsequently used exclusively as training machines. The designation they received Neubaufahrzeug (Nвfz) - literally "the car of a new design".

In 1934, three more tanks were produced by Krupp. These machines respectively received the number XXUMX, number XXUMX, number XXUMX. Externally, the cars of the “first release” and the second one are quite noticeably different. With the same chassis, they had different turrets and weapon systems. In addition, these were already real combat vehicles, since they were made of armored steel.

The design of both cars, although it was very impressive, did not shine with special originality. In general, it was the German response to the British and Soviet three-turreted tanks. Frontal armor plates had large angles of inclination, however, the thickness of the armor was small and was only 20-mm. The T-28 had a 30-mm frontal armor, so he had no advantage in booking over our booking machine. Many of the details on the first tanks had rounded shapes. In particular, the tower was rounded from the front and the tower of the tower behind. This was done so that the stern machine gun turret would have the maximum sector of shelling, and of course, this increased the resistance of the armor. 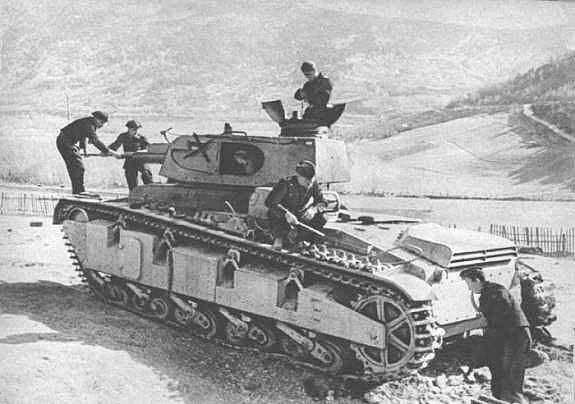 Speaking about the design of the car, it should be noted that the Germans carefully studied all the advantages and disadvantages of both Soviet and English cars and decided, apparently, to do something between the Soviet T-28 and T-35, and the British tank "Vikkers-16 t. Let's start with the fact that the tank had three towers, but they were located diagonally from left to right. On the left in front of the machine gun turret with one MG-13 machine gun (later MG-34), then a central large turret with a commander's turret, armed with the same machine gun in a separate installation, and two 37 and 75-mm guns (KBK-3,7L-45 and KBK- 7,5L-23,5), paired vertically, and on the right rear another machine-gun turret. Ammunition of the tank was: 37-mm shells - 50, 75-mm - 80, cartridges for machine guns - 6000). With such a composition of weapons, this tank was definitely stronger than the British machine and the Soviet T-28, but inferior to the T-35 tank, taking an intermediate position between them. 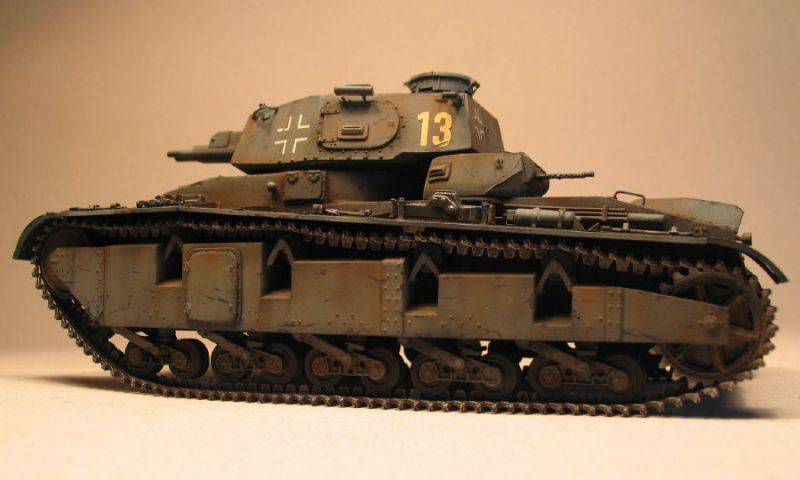 But the engine "Maybach" HL108 TR power 280 HP for a tank weighing in 23 tons was obviously weak. Although he could accelerate it on the highway to 32 km / h. Power reserve was only 120 km. The drive wheels were in the back, which was not typical for German cars leading in the front. The engine was shifted to the left, as the tower with the machine gun was on the right. The suspension consisted of 10 paired rubber coated rollers of small diameter, interlocked on five trolleys. Coil springs were used as a shock absorber, so the suspension was very simple.

The upper branch of each track relied on four rubberized twin skating rinks, fixed in the false-board niches on the brackets in the shape of the letter “V”. The “front wheel” also had a “gum”, which reduced the wear of the tracks and the rink itself. Below it was an additional video that should help in overcoming obstacles. The track width was 380 mm, that is, it was the same width as the first tanks Pz.III and Pz.IV. Again, for such a tank, it was too narrow, which could not but affect the maneuverability and maneuverability of the new tank, but increased its maintainability. The undercarriage had an armor-made bulwark that covered the suspension springs. 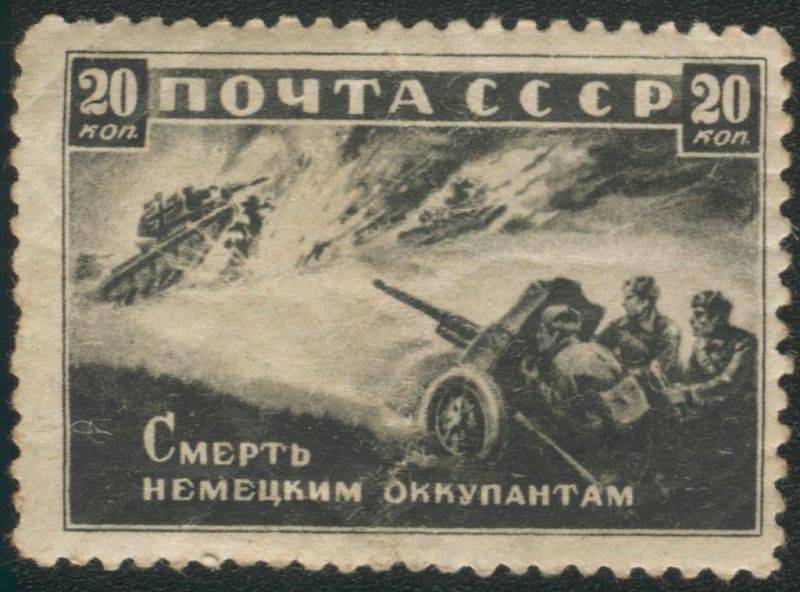 Soviet brand 1943 of the year, where you can see this tank.

The tank crew, consisting of a 6 man, had a good view and 8 hatches for entry and exit and 4 for maintenance. Only on the main tower of the hatches there were three: one on the commander's tower and two on the sides, closer to the aft. The first two tanks hatched opened along the tank, which was inconvenient. On the other three, received the tower "faceted" outlines, this was taken into account and made them open against the movement, so that the open doors served as a shield from the bullets. Another noticeable change was the location of the guns. Now they were placed not one above the other, but horizontally: 37-mm to the right of 75-mm. The hatches had machine-gun turrets, a driver’s cabin and two more manholes were in the bulwarks right behind the drive wheels. For communication, a radio station with a range of 8000 m was used, which had a hand-held antenna on the first two tanks and a whip antenna on the last two tanks. But such an important indicator as the thickness of armor on both versions remained unchanged: 20 mm - body armor and 13 mm - tower armor.

And then began the service of all these machines, and in a very unusual quality of tanks PR, although the Germans are unlikely in those years used this then a purely American term. They were filmed! They were filmed in factory workshops from different angles, filmed, filmed ... Then during the Norwegian campaign three tanks with armor protection composed of 40s of a separate special-purpose tank battalion were sent to Norway, where they marched through Oslo and again were filmed, filmed, and filmed. As a result, pictures of these tanks, first in the factory shops, and then on the streets of Oslo, went around the whole world. As a result of the information that was skilfully presented in this way, all foreign military specialists were afraid, they put the silhouettes of the new tank in all their officers' directories and began to assert that Germany had such tanks ... a lot! Lots of! And soon it will be even more! There are these photos in our domestic editions devoted to the Great Patriotic War, there is a reference book Heigl, there are ... everywhere! For example, in the “Determinant of the types of fascist tanks” published at the beginning of 1941, Nbfz. (under the name "Rheinmetall") was indicated as the main "heavy tank" of the German army, while it was reported that it has a solid armor thickness - 50 – 75 mm. And all this was done by only three tanks, which were skillfully ... filmed!

As for the combat service of these tanks, it turned out to be short and not impressive. 20 April 1940, these tanks, along with others, were attached to the 196 Infantry Division and went to beat the British along with Pz.I and Pz.II. The roads in Norway are narrow, the combat area is mountainous, there are rubble all around, and the bridges are dilapidated and not designed for the passage of such equipment. In addition, the British fired at them from their Boyce anti-tank rifles and Hotchkis 25-mm French anti-tank guns. As a result, from the 29 Pz.I, which the Germans possessed in this 40 tank battalion, 8 vehicles were lost, 2 from 18 Pz.II. and 1 NBFZ. Moreover, the latter was not hit, but simply stuck in a swampy lowland in the area of ​​Lilihammer. It was not possible to pull him out, and although the situation was not so dramatic, the crew blew up the tank so that it would not fall into the hands of the British.

The remaining two tanks were then returned to the Reich, where they were all lost. There are no documents testifying that they were sent to the Eastern Front, but there are no those who prove that they did not send them. Even in the tank museum in Münster, nothing is known about their fate. In any case, it was not difficult to set them up for Soviet tanks. But their impressive appearance ... here ... oh yes, they fought perfectly!

We are in Yandex Zen
Once again about tanks, Soviet and German
Armored vehicles of Germany in the Second World War. Part of 2. The evolution of the organizational forms, the composition of the Wehrmacht Panzervawe and the SS troops
23 comments
Information
Dear reader, to leave comments on the publication, you must to register.