Whose aggression threatens the world - Russia or the USA? ("SVOBODNE NOVINY", Czech Republic) 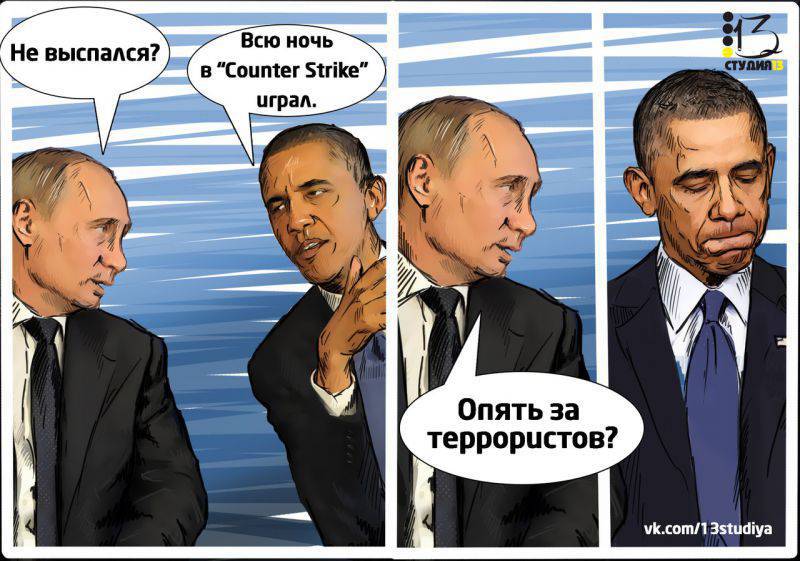 The wars in Iraq, Syria, Libya and Ukraine, the emergence of ISIS, as well as the complete disintegration of these countries and millions of refugees ... Who is behind this - Russia, as we are represented by our and Western media, or the US, as presented by the supporters of Russia?

This year, speaking about the state of the Union, President Obama called only one country the enemy of America - Russia. Another mentioned enemy was ISIS. In an earlier speech, Obama equated Russia with the Ebola virus.

Is Russia really the aggressor who ruined the Arab world with the support of the Syrian President Assad, and has Russia really attacked Ukraine by military means, what do we hear from media like Reuters, CNN, BBC and our channel ČT?

The art of propaganda lies in the skillful spread of half-truths, but how could Putin unleash a war in Ukraine?

What, he overthrew the democratic regime of President-elect Yanukovych, planted an illegitimate putsch government headed by Turchinov and Yatsenyuk and ordered them to launch an “anti-terrorist operation” to exterminate the population of Donetsk and Luhansk, which refused to recognize these coupists as their new rulers?

Was it not like this: American “diplomats”, concentrated in Kiev, threatened Yanukovych if he applied violence to demonstrators? And aren't they the very "demonstrators" who, after the violent, illegitimate coup in Kiev, approved the war against the population of Eastern Ukraine? And aren't they the very American “diplomats” who accused Russia of starting this war?

More than enough has already been said about Iraq and Libya. These countries were attacked by none other than NATO led by the United States. In addition, the "democrats" led by the United States killed both presidents of these countries, as well as most of the members of their governments. Even Hitler did not do this if the presidents and the governments of the captured countries submitted to him. The Americans ruthlessly gave the order to kill the leadership of the conquered countries and made these countries plunge into chaos. Almost no one believes that this was not the goal.

But the United States cannot leave the blame on them, so they chose Russia and Putin as the main culprit of the aggression. The United States forced Europe to impose senseless economic sanctions, which, in addition to Russia, weaken Europe as well, but the Americans are not particularly concerned.

Unceasing anti-Russian propaganda in American corporate media competes in anti-Russian and anti-Putin hysteria. The American elite today rallied more in its disregard of Russia than during the Cold War. During this period, dissenting voices were still allowed. Now they are completely excluded.

In fact, anyone who has real knowledge of Russia is today condemned as a “Putin protege”. Even such academic "heavyweights" as Stephen Cohen. So there is a strange situation when most of the American commentators of the official media are people who either have never lived in Russia or have not been there for many years. Or both.

If old Joe McCarthy were alive today, he would be broadcast on CNN every five minutes.

The fact that experienced analysts in Russia who understand this country have been replaced by neoconservative blockheads who put this country on a par with Syria, ISIS and North Korea, frankly, worrying. Russia is not militarily lightweight: it is the second strongest military power in the world.

The American elite hates Russian President Vladimir Putin - because he allowed himself to speak out against the authority of Washington.

America consistently supported all countries and all politicians who posed as potential victims of Russia. And if Putin tried to support a new era of cooperation, Washington was never able to move away from the cold war mindset. The Kremlin is bad, the enemies of the Kremlin are good.

I quote: “Constant propaganda reduces hopes for a warming of relations, especially when today the most popular Western publications simply spew out government propaganda. Again, the same helpful idiots who called for an illegal war against Iraq today are turning their views on Russia. For confirmation it is enough to refer to the “Gekaufte Journalisten” (“Purchased Journalists”) of the German journalist Udo Ulfkott. In this bestseller, the former editor of the Frankfurter Allgemeine Zeitung tells how many tales in the German media have been “prompted” by the CIA.

At the same time, the anti-Russian rhetoric in the USA is reaching a new level. Americans are bombarded with propaganda about "Russian aggression." Especially Fox News and CNN, where Major General Robert Scales is shown almost every day. Scales recently called for "America to start killing Russians ..."

The Kremlin understands that using cooperation with the West to foster economic growth is an empty number. This explains Russia's enthusiastic attitude towards the BRICS movement. The same reasons for the origin of an alliance with China, which in the long term is not in the interests of Moscow.

Nevertheless, Putin has calculated that the option of obediently bowing to Washington is the worst of all that can be.

And this is a real tragedy, because all this will strengthen China most of all, which, having reached the peak of power, will turn into a real world threat. After all, China is the cradle of civilization, and the Chinese nationalists remember this very well.

It is a pity that the United States, which by their military aggression, unleashing and supporting military conflicts, increasingly destabilize most of the world, does not know about this.

That is why the United States, and not Russia, is the greatest danger to peace on Earth.

Ctrl Enter
Noticed oshЫbku Highlight text and press. Ctrl + Enter
We are
Refugees from Syria. Will Russia accept immigrants from the Middle East?Results of the week. "Excuse me, did I, too, chapel ...?"
22 comments
Information
Dear reader, to leave comments on the publication, you must to register.