Fourth Reich will not be

7 September 2015
54
We live in amazing and scary times. What yesterday seemed like sheer insanity is becoming a reality right before our eyes. We will not talk about Ukraine, but let us touch the places a little more civilized. A year ago, say, the disintegration of such a developed and prosperous country like Germany could have seemed an absurd fantasy. Not anymore. Moreover, with each passing month a similar outcome is becoming more and more real, along with similar processes in other states that emit the spirit of the European Union. And the reason for all this one - the countless hordes of refugees, who arrived in the Old World for a better life. 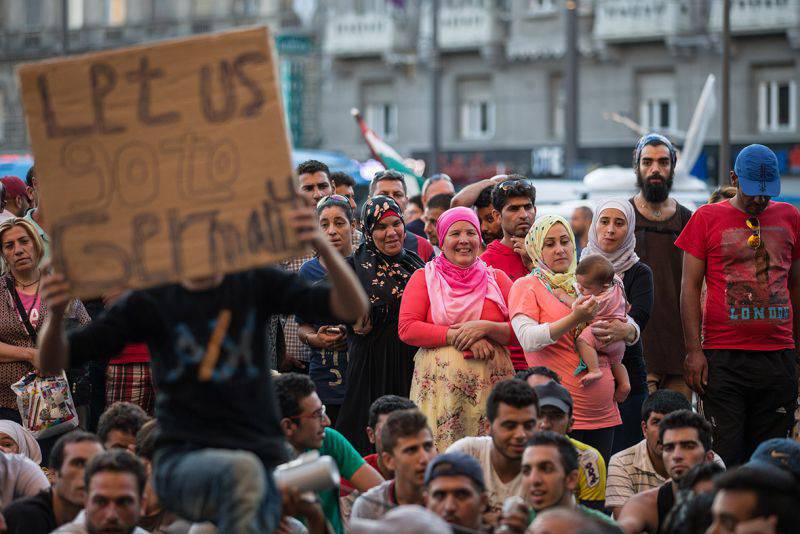 The richest part of Europe miscalculated strongly with the Dublin Agreement, which stipulated that the EU country to which they arrive should receive the migrants first of all. The Hungarians, Greeks and all the others quickly figured out what the catch was and, not wanting to become a buffer, organized an almost unimpeded transit of huge masses of refugees through their territory to rich countries. It is not excluded that a choice was made unofficially before the migrants: a barrack and a benefit in 50 euros for a month in Hungary or transit to the Federal Republic of Germany, where, as you know, all those who arrive will have a wonderful life. It is not difficult to guess what any migrant will choose. So tens of thousands of people, not registering anywhere, cross transit countries and are already announced within Austria, Germany, Denmark and the United Kingdom. Officially, only Germany is preparing to accept 800.000 immigrants from the Middle East and Africa (10 will be allocated billions of euros for them), and there is every reason to say that this figure is not the limit.

In a situation where the political control center falls into suicidal schizophrenia, separate parts of a whole begin to increasingly seriously think about separation and separation from the common state, until its sinking Titanic has dragged everyone down. We observed something similar during the collapse of the USSR, but now individual EU countries diligently insulate themselves, trying to escape from the flow of migrants.

The most interesting thing is that this flow was formed, apparently, not at all spontaneously. The independent press has already mentioned that migrants mentioned the help of mysterious American organizations, which organized the transfer of the first wave, which then began to invite the rest, putting the process on a self-sustaining basis.

The calculation of overseas intelligence services is fairly obvious: Europe, frightened to an inadequate state (we don’t forget the notorious “Russian threat”, the second after the migration threat) will happily sign the Transatlantic Partnership on any, even the most inveterate, conditions and even more. This is if to describe the situation primitively and in a nutshell.

If you touch the probable idea in detail, then everything will become even more curious. Right now, the world is on the verge of moving into a new technological order. A distinctive feature of such a transition will be a large-scale "dispossession" of a frankly fattening middle class, turning it into a impoverished and powerless mass ready to work in the most difficult industries for a bowl of spoiling. Such an American elite plans to turn even with tens of millions of its own citizens - that they are some kind of Europe? Which, by the way, according to the financial sharks of the New World, lives unreasonably well.

The fictional threat from Russia and the real one from migrants may well force European governments to ask the United States to restore order. The ideological base in the USA is ready for such measures. In American schools in the classroom stories The concept that the irresponsible Europe has unleashed two world wars on its continent has been taught for a long time, and the Americans had to save everyone by paying with the lives of thousands of their soldiers. There is no doubt that a new invasion of Europe will be served under a similar sauce. There is also no doubt that the “old Europeans”, tired of the atrocities of migrants and the lack of will of their own authorities, will meet with enthusiasm the American invaders, who will bring order in the way that Ferguson suggested. At that era of madness called "tolerance" and will end.

So the New World will solve several tasks at once: finally subordinate Europe to itself, relegating it to the “is, sir” level; rob local burghers, immersing them, if not in poverty, then in extreme poverty; and finally, having gained complete control over the mass of degenerated Europeans, Arabs, blacks and all the rest, the United States will proceed to the final act. Namely, the creation of this brutal mass of the army to invade Russia.

True, the Americans are at risk of miscalculation and going too far, and Europe risks plunging into such chaos that Washington will not receive any benefit. 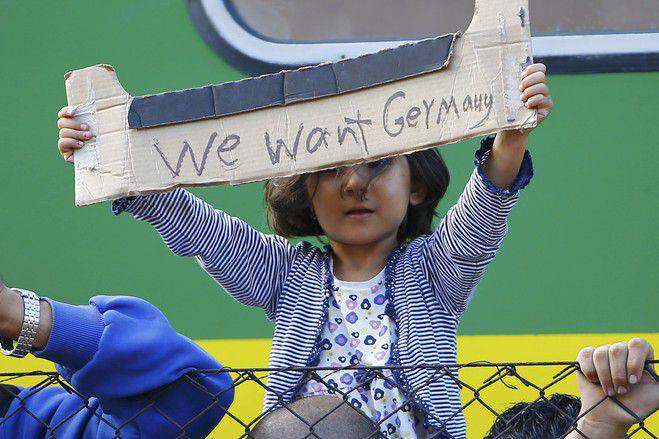 Migrants bring with them not only crime, but also chaos. Cases have already been noted when indigenous Germans, having seen enough of the eccentricities of the newcomers, are increasingly beginning to behave in the same way. After all, if they can, then why should not we? And this is just the beginning.

In an attempt to isolate themselves from the crazed insanity, the federal states will think about secession from a politically non-independent and inadequate Berlin. First, in fact, when barriers of barbed wire and a company of machine gunners appear on the administrative borders within the states, and then on the political consolidation of sovereignty. By and large, only two or three steps separate some Thuringia or Bavaria from declaring complete independence. The foundations for such an outcome were laid by the Western allies in the formation of what is now called the Federal Republic. Its territories have wide autonomy, their own parliaments, and even the right not to accept one or another federal law — so the winners in world war insured themselves against the appearance of the new Hitler. Now such decentralization can play a decisive role in reformatting the common European map. Although the lands are not free states that have the right to declare independence, as practice shows, in critical circumstances, such trifles no longer interest anyone. In the recent past, parts of the current FRG were actually independent. It is not only about the GDR and West Berlin, but also about Saar, who in 1950's had good chances to remain an independent state. One way or another, Germany does not seem to have the Fourth Reich, but there will be either a conglomerate of loosely connected German territories or a new caliphate.

Well, and instead of the epilogue - a bit of banal. The United States is currently undergoing a new industrialization. The largest European competitor in high-tech industries frankly interferes with the Americans, and its elimination in one way or another will free up part of the market that is currently occupied by Germany. And for this it is not necessary to destroy Germany to the ground; it is enough that the machine tools instead of the indigenous Germans were illiterate and lazy newcomers.

We are in Yandex Zen
"Trouble" of the Promised Land. African immigration to Israel
What to do with the refugees? Eastern Europe to host thousands of Africans and Asians
54 comments
Information
Dear reader, to leave comments on the publication, you must to register.