Is it easy to attack Britain? 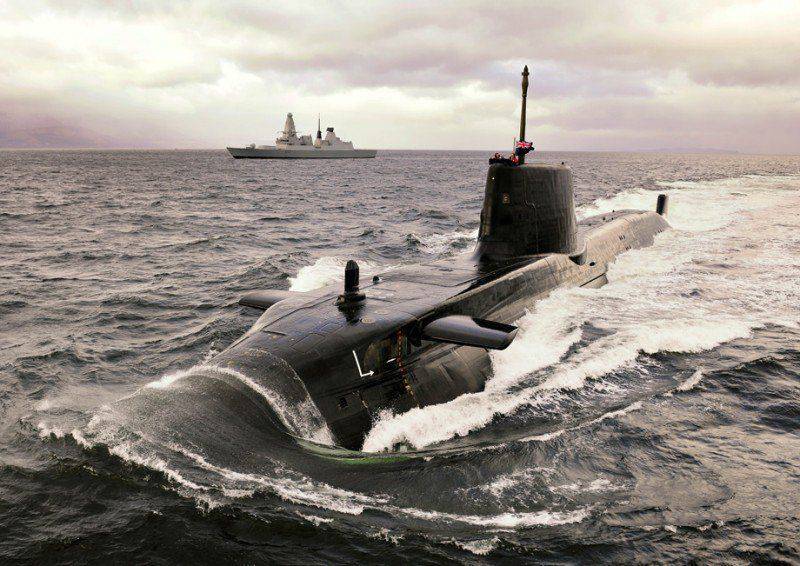 "We should help Argentina to return the Falklands."

- From comments on the Internet.

It will not be easy to take away the disputed islands from Britain. To do this, first have to deal with the British fleetwhich in quantitative (and, more dangerous, in qualitative) aspects surpasses the Navy of most countries of the world.

What is the modern Royal Navy (RN)?

Faded glory. Scraps of the great past, lying on the grave of a great empire.

The answer is incorrect.

The British know a lot about maritime affairs. They are the only ones who fought at sea over the past 70 years. They won their victory in the open ocean, at a distance of 12 000 kilometers from their native shores.

The only ones who used the underwater nuclear-powered icebreaker in the battle (sinking of the Conkerror submarine of the cruiser General Belgrano). Apart from rocket attacks on the territory of Yugoslavia and Iraq using the Tomahawk SLCM. It is worth noting that the RN is the only one of the allies of the United States who has received this powerful and long-range tactical weapon, ahead of its time on 30 years.

They cut and took hydroacoustic antenna. So quietly that on the anti-submarine ship at first they did not understand why the gas was out of operation (Operation “Waitress” in the Barents Sea, 1982, with the participation of the above-mentioned submarine “Conkerror”).

They are the leaders in the successful interception of the anti-ship missile in combat conditions (Gulf War, 1991 year, the Gloucester destroyer distinguished himself).

The British fleet is armed with the fastest helicopter (Westland Lynx, the unbroken record is 400 km / h). The first (up to 2015 of the year - the only in the world) sea anti-aircraft complex with missiles with active seeker (PAAMS). Their ships are driven by the most powerful of the existing gas turbines (Rolls-Royce MT30, power 50 thousand hp). And the submarines are equipped with underwater acoustics capable of distinguishing targets on the other end of the ocean (according to the developers, the Sonar 2076 can hear the noise of the propellers of the Queen Mary 2 liner 3000 miles away).

Along with the American “Ford” British “Queen” is the most “advanced” project in its class. Yielding to the American in size (65 vs. 100 thous. Tons), the British carrier-based ship almost surpasses its ally in the number of promising technologies embodied in its design. 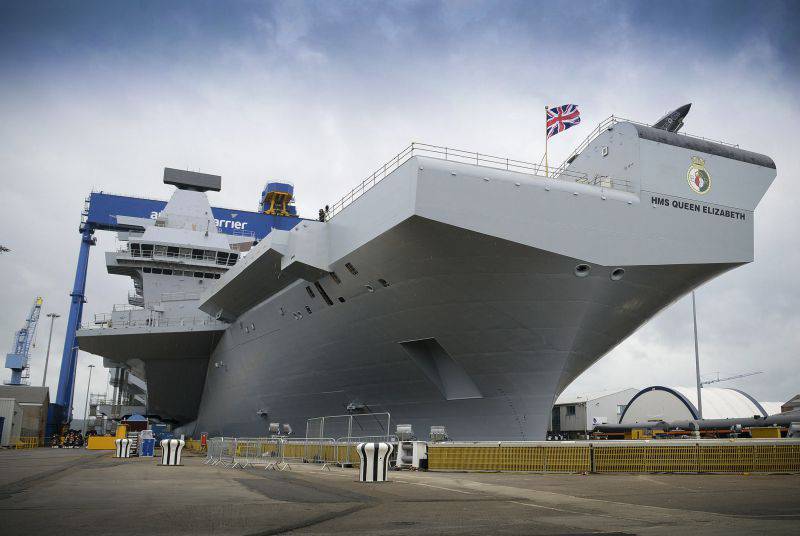 Two radars with active PAR. Survey radar S1850M, capable of distinguishing targets in near-earth orbit and a radar for tracking the horizon. Type 997 Artisan, operating in the centimeter range.

Fully automated system for loading, storage and supply of ammunition.

In connection with the rejection of the electromagnetic catapult, “Queen” is intended for basing aircraft with a short takeoff. Selection of the British - F-35B fighter-bomber. According to the calculations of the military, on board it is supposed to have all 12 fighters (up to 24 in wartime) and a mixed squadron of helicopters.

Realizing that the F-35 will be late by the time the ship entered service, the British are considering using the Quinn as a giant helicopter carrier. With combat helicopters "Apache", V-22 tweeters "Osprey", military transport "Merlinami" and "Chinook".

In addition, space for 250 marines is reserved on board the Queen Elizabeth. 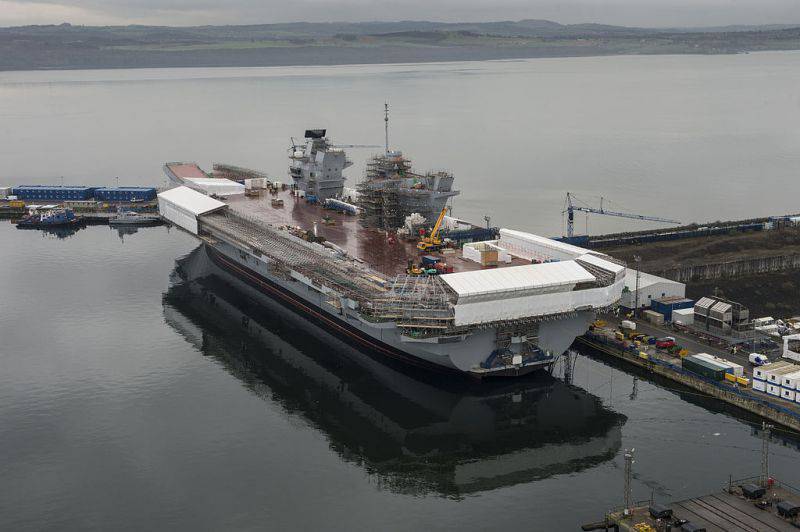 What is this ridiculous ship - an undecided carrier, a helicopter carrier, a landing ship or a maritime radar base? .. The design of “Queen Elizabeth” is full of controversial decisions. But it is important to understand that from the point of view of the domestic fleet, the question is simply: an aircraft carrier at the berth or an empty berth. So the criticism is worth the wait.

The British aircraft carrier is already built. How and where to apply “Queen” - the answer is not long to wait.

Destroyers of the “Daring” type (in the line - 6 units)

Combat core RN. The most advanced ships of their class in the world, which have become a real alternative to the American Ajises.

Air defense squadrons - the only priority of modern cruisers and destroyers. In the British “Derring” ideal layout for this difficult task. The best of existing detection tools and unique weapons. Two radar with AFAR, one of which is located on the top of the 30-meter foremast. PAAMS-S air defense system with “Aster” missiles, which are equipped with active targeting heads. 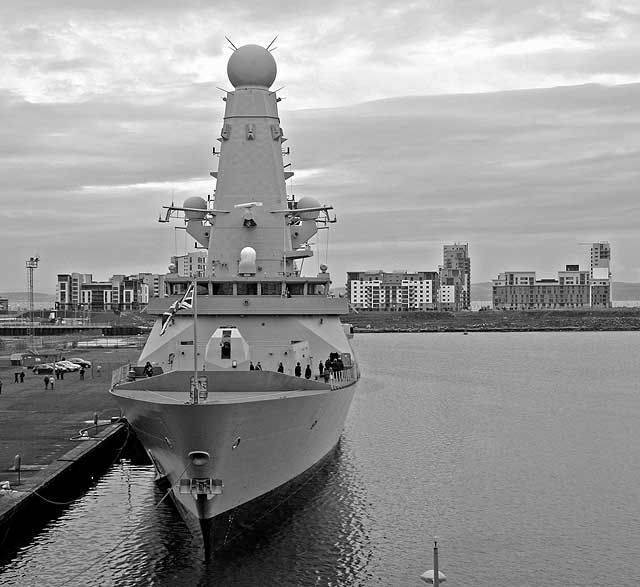 Despite its specialization, “Daring” remains a universal ship - with artillery, hydro-acoustic complex and a helicopter. According to the norms of peacetime, the destroyer is structurally underloaded: there is a space reserved for installing another 12 launch cells for the Tomahawk CD, as well as space for the anti-ship Harpoons and means of active self-defense.

Ships of this type were built in 90-s. Now they are being replaced by “Type 26” (global warship, GCS). A large frigate equipped with the multi-channel “SiCeptor” air defense missile system, launchers for the Tomahawk and other high-tech devices, including drones, lasers, gas turbines R & R MT-30 and elements of the stealth technology. The start of construction of the GCS is scheduled for 2016 year.

In the ranks - 2. On running trials - 1. In the construction - 3. The last, the seventh boat of this type (“Ajax”) is to be commissioned in the 2024 year, at the moment there is a cutting of steel for its hull. 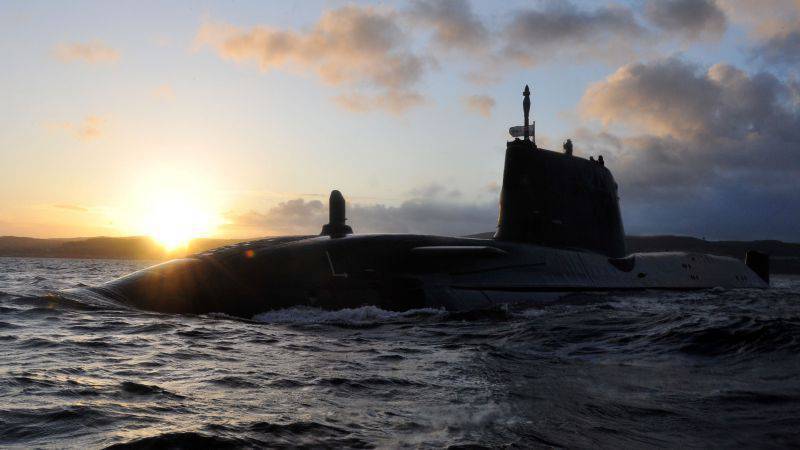 "Artful" on running trials, August 2015 of the year

British underwater terminator, claiming to be the most advanced of the existing submarines. There are many secrets behind the stylish angular appearance. It is reported that these are the world's most secretive nuclear ships, whose sonar complex (Sonar 2076, consisting of 13 000 hydrophones) is able to track the Queen Mary-2 liner along the entire route from London to New York, while the boat itself is off the coast of Albion). 39 thousands of strips of special polymer, glued on the outer surface of the case, completely absorb the radiation of enemy sonars, creating the illusion, "as if it were not 97-meter Astyut, but a dolphin cub."

As a result of joint exercises, even the Yankees have lost themselves. Their "Virginia" could not detect "Astyut" and was "conditionally destroyed" in battle with this submarine. High secrecy and high-quality underwater acoustics is a tradition of British submariners (a living example is “The Waitress”, with theft of a secret gas just behind the stern of the ship).

“Astyut” is powerful and cool. Like his weapon, the Sparfish self-guided long-range torpedoes (speed - up to 80 units), equipped with a built-in sonar. Or the Tomahawk SLCM tested in battle, capable of hitting targets at a distance of 1600 km.

“Astyuts” are replacing older “Trafalgars” (four multi-purpose submarines built at the end of 80's, whose decommissioning is planned for the period up to 2022 of the year).

Four Vanguard type submarines, armed with the reliable Trident-2. The only difference from American SLBMs is the thermonuclear blocks of their own, British design.

On the shores of Albion there are quite a few supporters of the rejection of maritime nuclear forces (and nuclear forces in general, since all British nuclear weapons are located on submarines). The main argument is what the four SSBNs and 64 missiles mean against the background of the nuclear arsenals of Russia and the USA.

On the other hand, the existence of an NSNF gives weight to the geopolitical arena and serves as a guarantor of the country's sovereignty.

In the ranks - 3 units. The helicopter carrier "Ocean" and a pair of transports docks for the delivery of heavy equipment (such as "Albion"). In terms of size and purpose, typical barges are “Mistral” with their advantages and disadvantages.

These are official numbers. Informal figures are different. A significant part of the ships of the British fleet goes under the control of RFA (Royal Fleet Auxiliary).

The Royal Auxiliary Fleet is a military organization with dual-use ships operated by civilian crews (to save on salaries, salaries and insurances).

Despite its “civilian face,” RFA’s technology is clearly not for jokes. 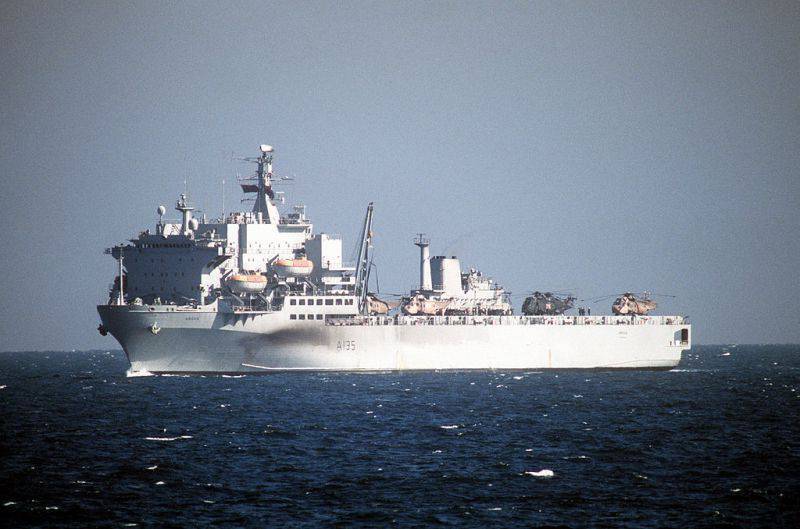 In addition to the “Argus”, converted from a Dutch container ship, the RFA has three specially built landing ships (in fact, the “Mistral”). With a flight deck, two landing boats and a cargo deck for 24 tank Challenger 2 To ensure their safety, “peaceful transports” are armed with six-barreled “Phalanxes” and 30 mm automatic guns. 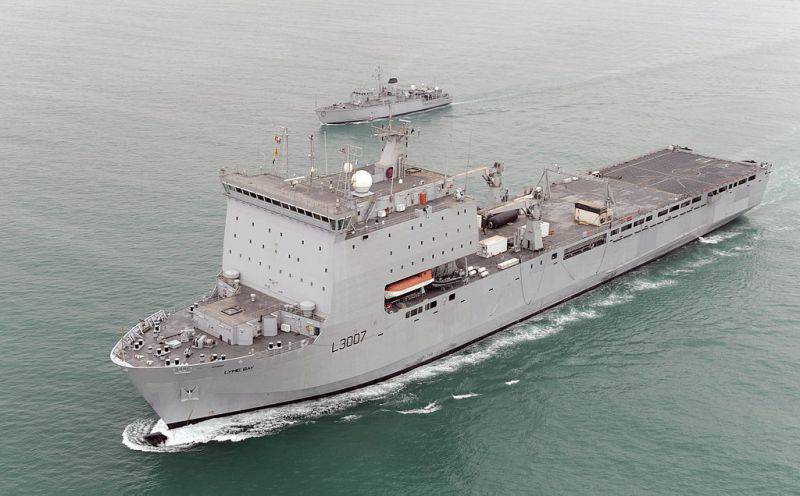 One of them is RFA Lime Bay

Also in the structure of the RFA there are eight integrated supply ships (KSS), four high-speed container ships and the floating workshop “Diligence”. 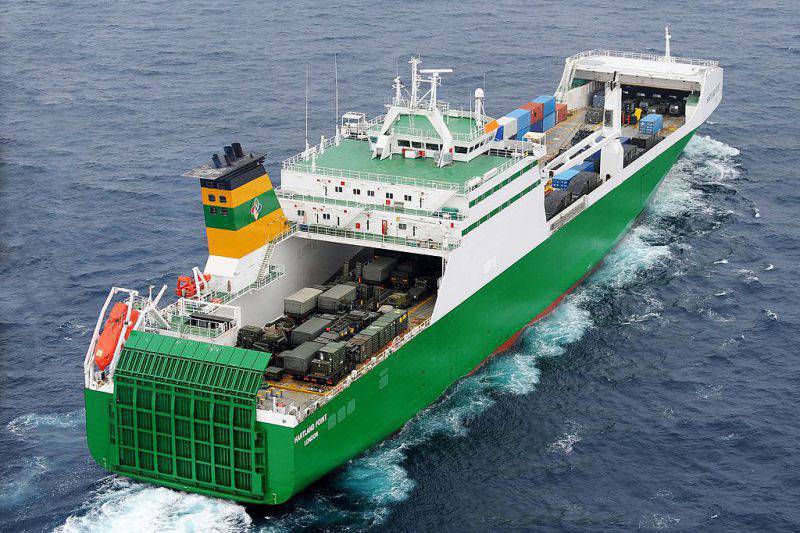 With a developed fleet of amphibious and transport ships, Britain is able to quickly transfer its expeditionary army and fleet to any theater of military operations. Just as happened in the 1982 year.

Impregnable walls of Britain - steel sides of its ships

Despite the colorful description of the exploits of Royal Navy, the author of the opus is by no means an Anglophile. Like many of you, he would love to see the “higher race” on the bottom of the sea. But for this, first, preparation is required. And not promises to overcome all “one left”, hiding behind loud slogans.

With that colossal difference in the quantity and quality of military equipment, it would be unwise to dream of “returning the Falklands”. And to hell with these islands on the edge of the world!

With these guys you need to learn, and not to mock the "decrepitant mistress of the seas." Moreover, no “decrepitude” was noticed there. Her Majesty's fleet is in better condition than in all of the last 50 years.

It is compact, at the same time, sufficient to solve any pressing problems. Well balanced and saturated with the most modern technology. With a clear concept of application and solid combat experience, which confirmed Britain’s right to the status of a great maritime power. 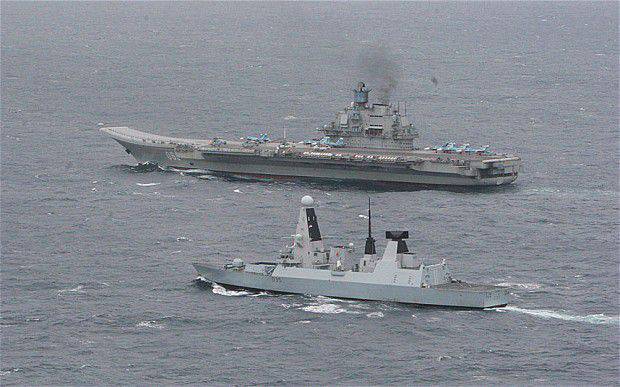 With regard to the question from the title of the article, by now Falkland has been turned into an impregnable fortress. “Unsinkable aircraft carrier” in the midst of the boundless ocean. A large air base with a three-kilometer runway was built on the island. Placed there, the Typhoons of the Royal Air Force will sink any ship long before it approaches the “disputed territories”.

While the Armed Forces of Argentina - the main and only contender for the Falklands - have by now completely degraded. But it is already completely different. история... 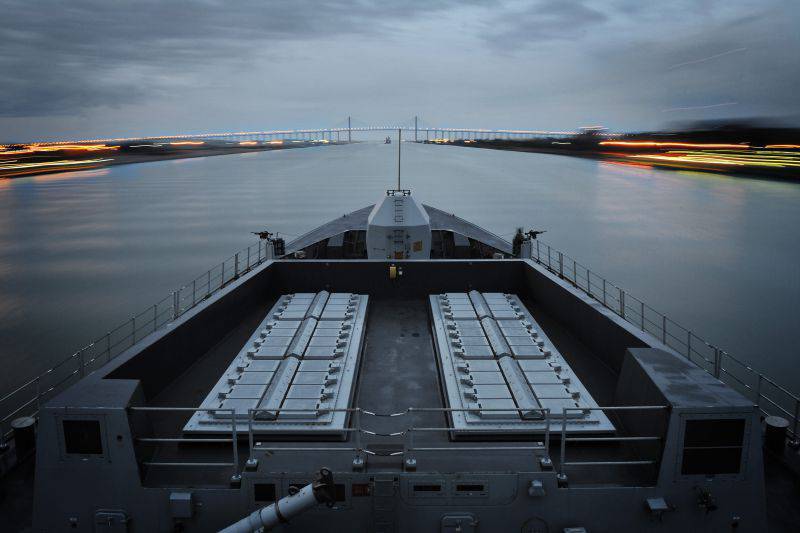 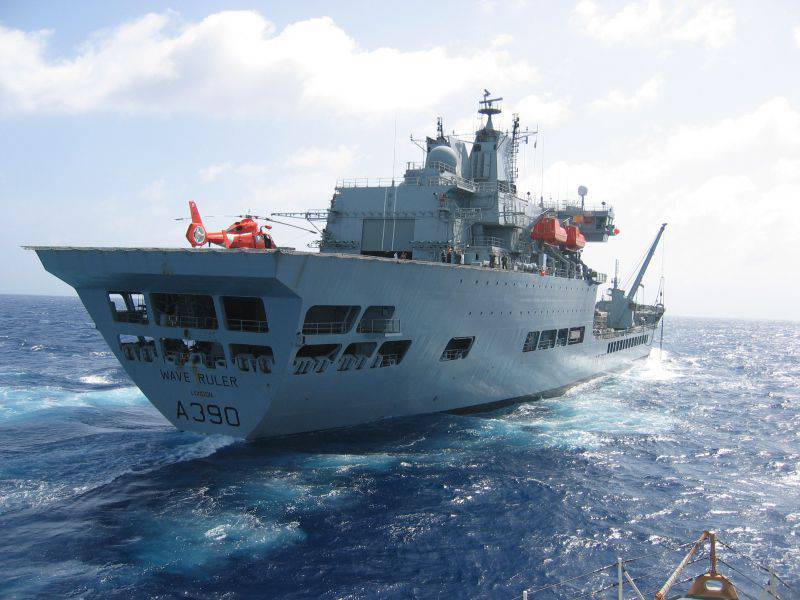 RFA Wave Rooler. 31000-ton high-speed tanker, one of two new types of KSS, built for the British fleet in 2003 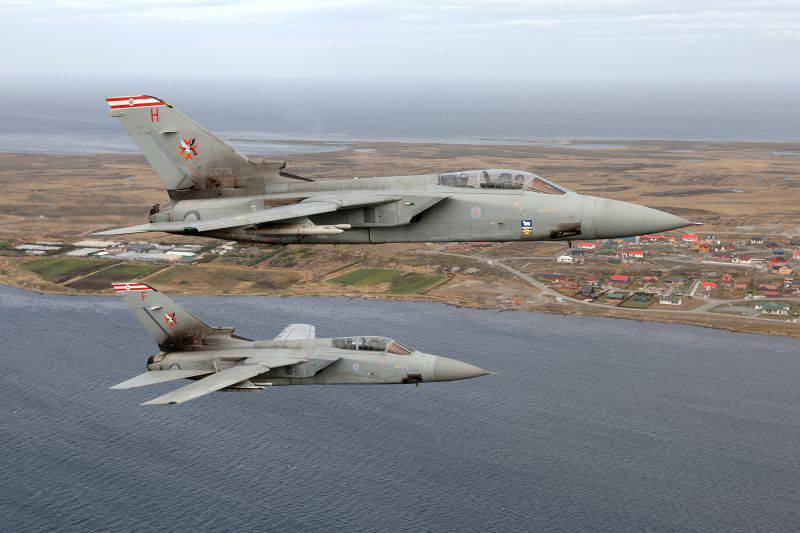 Tornado fighter-bombers over the Falkland Islands

Ctrl Enter
Noticed oshЫbku Highlight text and press. Ctrl + Enter
We are
Project 68-bis cruisers: the Sverdlovs' tasks in the post-war fleet of the USSR. Part of 3"Svetlana". History of creation
115 comments
Information
Dear reader, to leave comments on the publication, you must to register.