The coup in the DNI: who should congratulate? Part of 1 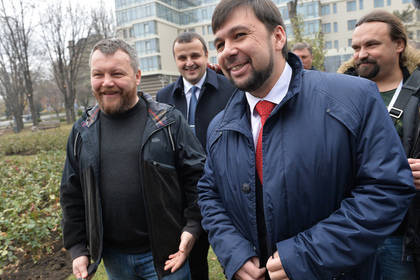 The fact that a coup occurred in the DPR, which will definitely change the subsequent political course of the unrecognized republic, is indisputable.


Denial Pushilin’s removal of Andrei Purgin from his post as Chairman of the People’s Council of the DPR for “non-political” motives. With the wording "for an attempt to disrupt the next meeting of the Council." And now Pushilin appointed. Council Chair.

Let's leave aside how being in Russia, Purgin was going to disrupt this meeting. Let it remain on Pushilin's conscience.

Let us leave aside the fact that "appointed" or "elected" Pushilin was by a majority vote at an extraordinary meeting. While some of the deputies tried to solve the problem on the spot with the detention of Purgin and Aleksandrov by the security forces.

The threat of interception of power by the parliamentary apparatus of the Donetsk People's Republic led to a change in the leadership of the People’s Assembly, some experts say. Their opinion has already been published by some media. I will not dispute this opinion, everything is clear and understandable here. Of course, the DPR parliament has its own troops, which can help the parliament to “seize” power. Of course, the commanders of units and divisions swore allegiance to parliament and are not able to separate black from white. The obvious stupidity of all such statements is so noticeable that there is no desire to discuss it.

Let's take a closer look with the good old principle "Qui bono". The principle is not one hundred years old, so it is fully applicable, for it was invented by the Romans, who understood the laws and principles.

So, who benefits, and, most importantly, what is beneficial in the essence of this coup.

The events themselves, one way or another connected with this coup, are also quite strange. The chronology is a difficultly disputed thing, so let's just look at the chain of events.

Pushilin explained the incident by the fact that allegedly Purgin fell under the influence of Aleksey Aleksandrov, who had previously made “a series of political statements that are contrary to the politics of the whole state” (quote from the Donetsk Agency News) Pushilin specified that Purgin’s resignation was related to his attempt to disrupt the parliamentary meeting.

According to eyewitnesses, on the night of 4 on 5 of September in Donetsk additional posts were put up in several places, a cordon appeared near the building of the DPR parliament. “They open rooms in the Hotel Central.” MGB is looking for Aleksandrov (senior) and Purgin's entourage, put up a post at Purgin's house.

Strange. Disrupting the meeting, having left for the previously announced meetings in St. Petersburg, what was announced and even scheduled a press conference at which Purgin had to tell the media about the results of this meeting? Where is the logic?

September 4 Andrey Purgin together with Aleksey Georgievich Alexandrov Sr. (head of the staff of the People's Council) and Alexei Alekseevich Alexandrov Jr. (head of the Secretariat of the People's Council) returned to Donetsk from a working trip to St. Petersburg. There they met with the deputies of the St. Petersburg Legislative Assembly and with representatives of public organizations. At the checkpoint "Uspensky" (on the border between the DPR and the Russian Federation) they were detained: during the daytime information appeared in various media that Purgin was not allowed to pass through the border for several hours.

By the way, Purgin was briefed on 18.30, where, as expected, he had to tell about the results of the trip.

The Ministry of State Security of the Donetsk People’s Republic issued a statement that the main purpose of the detention at the border was not Purgin, but the head of the staff of the People’s Council of the DPR, Alexey Georgievich Alexandrov. It was he who was denied entry to the DPR in connection with his destructive activities, “which posed a threat to the national security of the republic”: Alexandrov was engaged in his own political PR, presenting a personal opinion for the position of NA deputies. According to the MGB, Purgin, using parliamentary immunity, along with several other people's deputies "tried to help Alexandrov cross the border and hide him from the organs of justice."

And they have an interesting case in the DNI delivered. New page in stories diplomatic jurisprudence. To take and not to let a person back into the country is something new. Exposing the country, motivating all this with a "destructive activity" is understandable. But not to let it go back when a person left for official or personal need ... Even in Ukraine, they didn’t go down. Arrest at the entrance is a normal practice. But closing in is something new.

Later, information appears about the arrest of Purgin and Aleksandrov Jr., and also about the fact that Aleksandrov Sr. was wanted. Purgin was detained already at the entrance to Donetsk, on the Makeevskaya highway, then he was taken to the MGB building. Purgin's wife, Elena, was also detained.

In 21.00, an extraordinary meeting of the People’s Council was urgently convened in the republic. Journalists were not allowed on him, the session was closed. As a result, the National Assembly voted for the appointment of Denis Pushilin and. Chairman of the People’s Council of the DPR, instead of Andrei Purgin, who was removed from this post. Alexey Alexandrov was also removed from his post.

Interestingly, and voted as in August last year, under the machines, or how?

Alexander Zhuchkovsky, a volunteer, coordinator of non-humanitarian aid to the Donbas and just a man, whose opinion can be trusted, said the following:

“I have already managed to talk about what happened with a number of commanders and officials - the attitude to what is happening in people is sharply negative. Pushilin has a very low trust rating among the population of the republic and there is no authority in the army. On the contrary, Andrei Purgin enjoys sufficient respect and authority both among the citizens and among the militias. It’s still too early to sum up, but I want to say that in the DPR, there is not a "banal power struggle", as some write, but the imposition of a completely specific course of development and certain people who are called upon to ensure the implementation of this course. The fact that such a course and the people who carry it out is completely alien to the population and militia of the republics, the organizers of this process do not care. In politics and business there is no place for national interests and, all the more, for some "ideals". ”

On 17.00 5 September Purgin remained in custody and did not get in touch with his secretary. According to the information available to Purgin’s secretary, his wife, Elena, is next to him. According to unconfirmed reports, Pugin had a meeting with the head of the DPR, Alexander Zakharchenko, last night. The whereabouts of Aleksandrov Senior is still unknown.


Purgin personally actively participated in the Minsk negotiations from the very beginning, was in Minsk and 5, and 19 in September last year, when the protocol and the memorandum on the dividing line were signed. And now he is the official representative of the DPR in the Minsk working group on political issues. Nobody deprived him of this status. However, later, Pushilin made a statement saying that the functions of Andrei Purgin, which he performed at the negotiations in Minsk, would be removed from him and assigned to another person.

As for the prospects Purgina, he will remain a member of the National Council. This was stated by Chairman of the Parliamentary Committee on Health Alexander Avdeev. I wonder why Avdeev? Why not himself Pushilin or Zakharchenko? Purgin as if not the last person in the DNI ... Apparently, he was. Because it is still either arrested, or detained.

According to one version, the change of power in the parliament of the Donetsk Republic could mean the end of the era of domination of the so-called “war party”, which advocated the escalation of the conflict in the Donbas. Pushilin, who participated in all the Minsk talks, is more a diplomat than a military man, and supports the cease-fire policy.

According to another version, the coup in the DPR is intra-elite in nature and is associated with the struggle to control financial flows in the republic. Allegedly Alexandrov tried to create his own influence group in parliament and engage in business without taking into account the interests of other high-ranking officials. At the same time, Purgin was under his full influence and did not take independent decisions, which did not suit many of the DPR deputies.

Very strange situation. And not easy to understand. It was not for nothing that I wrote “Part of 1” in the title. Continuation will be as soon as I receive information from correspondents from Donetsk. It so happened that there is someone to cover what is happening from the scene.

As for the title of the article, for the time being we can congratulate Pushilin on the coronation as chairman of parliament. How much this move will be useful to the republic and the Donetsk people, it will be clear a little later.

Ctrl Enter
Noticed oshЫbku Highlight text and press. Ctrl + Enter
We are
Who benefits from the lie of Denis Pushilin: mayhem or lawlessness?Coup in Donetsk. Part of 2. State Emergency Committee in Donetsk
132 comments
Information
Dear reader, to leave comments on the publication, you must to register.