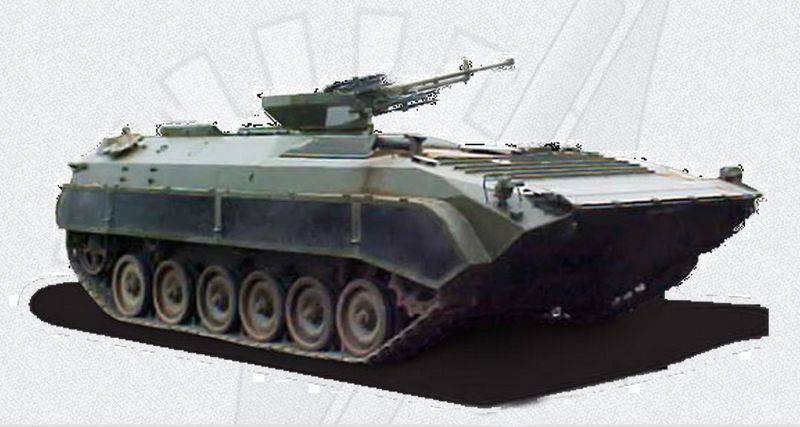 Sudanese Khatim-1 armored personnel carrier with a protected combat module installed with a 12,7-mm machine gun, support rollers from M113, the upper part of the suspension is protected by a rubber screen

However, Boraq and Khatim-1 have several significant differences from the BMP-1. In the aft troop compartment of the BMP-1, paratroopers sit on the axis of the vehicle facing the sides, the main tank with diesel fuel is placed directly between them. Embarkation and disembarkation is carried out through two stern doors opening to the outside, in which additional tanks for diesel fuel are made.

In the Boraq and Khatim-1 vehicles, the infantry sits on the sides of the troop compartment on the undivided seats facing each other. The company MIC announce the mass of Khatim-1 13 tons; in addition to the driver, commander and gunner, nine paratroopers can be accommodated in the car.
In addition, Iranian and Sudanese cars do not have any embrasures in the sides of the hull, the landing forces fire from open hatches on the roof.

The 12,7-mm machine gun mounted on the roof of this machine has some gunner protection, but other weapon modules are also available.

In the newer Iranian and Sudanese vehicles, the chassis is also different. For example, the original BMP-1 track rollers were replaced with a rubberized version, similar to the rollers of the BNR M113 armored personnel carrier from BAE Systems. In a sense, this is not surprising, since according to the Jane's World Armies directory, Iran is still armed with the 250 BTR M113. The tracks of the Boraq and Khatim-1 are also wider, which reduces the overall pressure on the ground and provides better grip on difficult terrain. There is no exact data, but, apparently, the torsion bar suspension for the machines could also be borrowed from the BTR M113.

Like its predecessor, after a little preparation, the machine can float, driven in water by the rotation of the tracks, which allow it to reach a maximum speed of 7 km / h. The power unit consists of a hp 330 air-cooled diesel engine. (which is 10% more compared to the Russian car), coupled with a manual transmission with five forward gears and one rear. This power unit allows the Sudanese car to reach speeds on the highway to 75 km / h and have a power density of just over 25 hp / t.

To date, MIC has announced at least three Khatim-1 variants: ambulance, ammunition conveyor and 120-mm self-propelled mortar. The last version was designated Khatim-2, and it looks a lot like its Iranian counterpart. He has a roof raised behind the power unit, that is, the hull design might also be suitable for the control station variant.

The 120-mm mortar fires through hatches on the roof with right and left turning angles of 15 °. MIC announces distances from 500 to 9000 meters when firing with a standard high-explosive fragmentation mortar shot of 14,5 kg. 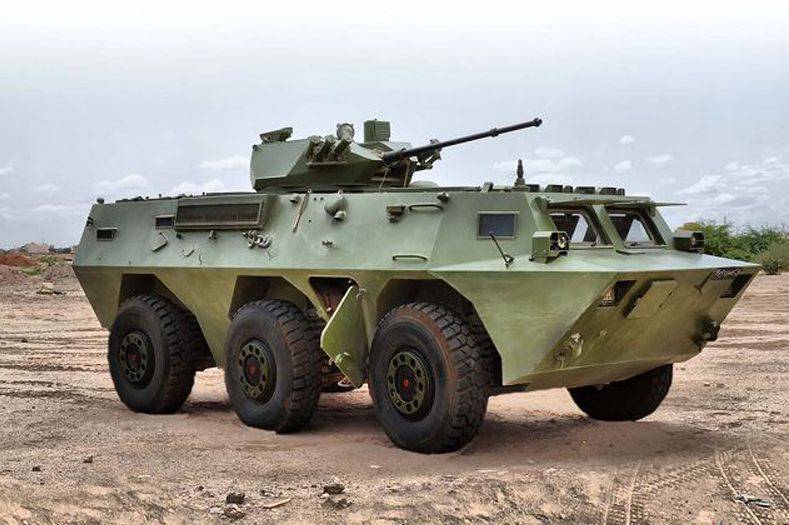 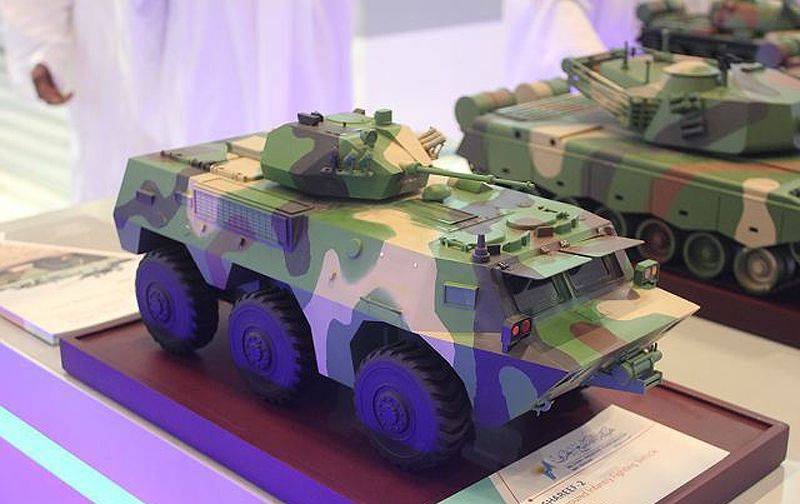 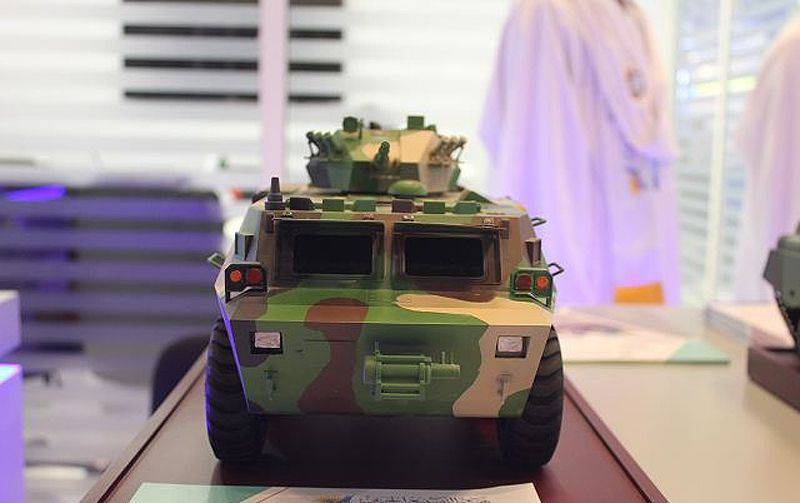 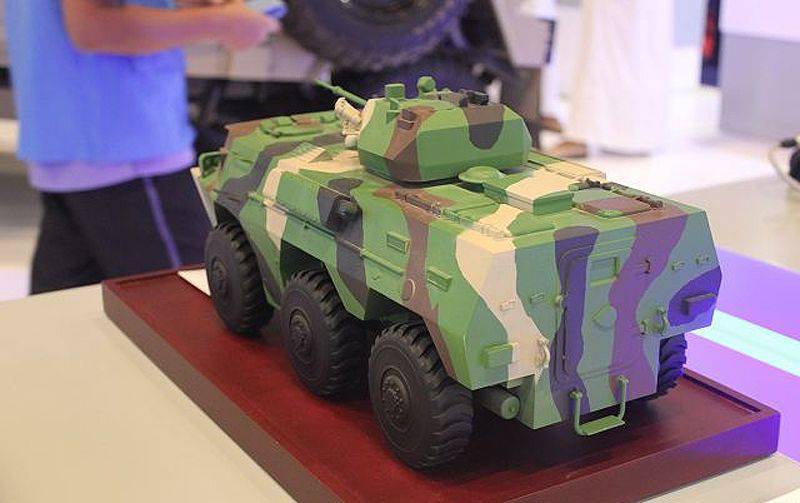 The newest Shareef-2 6x6 machine in the BMP configuration is equipped with a turret armed with an 30-mm cannon and an 7,62-mm coaxial machine gun 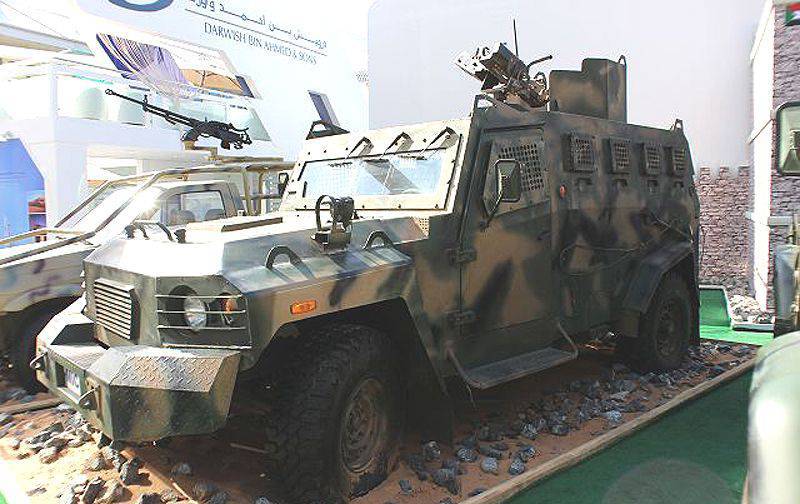 MIC also offers to export armored vehicles of its assembly under the designation Shareef-2, which are based on the WMZ551 6х6 machine developed by China North Industries Corporation (NORINCO).

This machine is equipped with a single turret with a 30-mm cannon with 500 rounds of ready-made shots and a paired 7,62-mm machine gun. Both types of weapons, according to MIC, are fully stabilized. This 30-mm tower without designation has already appeared on armored vehicles deployed by the Chinese army.

China exported such 6x6 armored personnel carriers to a number of African countries, but the Shareef-2 is not officially recognized to date by the products of the Chinese company NORINCO.

The commander and driver are placed in front of the vehicle, the diesel engine separates them from the troop compartment, which houses seven infantrymen and one gunner (in a single tower installed above the troop compartment) as standard; however, the BTR configurations may have a large capacity.

The turret can rotate 360 °, vertical guidance angles range from -5 ° to + 75 °. As a rule, on each side of the tower, a group of three electric-start smoke grenade launchers are installed.

The combat weight of the Shareef-2 is stated in 16,02 tons, the machine has a diesel engine with an output of 320 hp, which makes it possible to get the specific power of 19,3 hp / t and the maximum speed on the 100 highway km / h. Like Khatim, the Shareef-2 car is floating, but on the water it develops a slightly higher speed of 8 km / h.

At the light end of the line, MIC developed the Sarsar-2, which is officially considered a light reconnaissance vehicle 4x4, but is essentially a light BTR or protected patrol vehicle.

In essence, an armored case was installed on the chassis of a military truck Kia 4x4 weighing 1,25 tons offering protection against small arms weapons and blast a hand grenade. According to the company MIC, the combat weight of the machine is 5,5 tons, the power unit consists of a four-cylinder diesel engine D4DA horsepower 139. coupled with a manual transmission. This means that the new armored car is rather slow, the maximum speed on the highway 80 km / h.

The commander and the driver are placed immediately behind the protected engine compartment, followed by the troop compartment, in which the windows with bullet-proof windows and embrasures for firing are cut. The 12,7-mm machine gun is mounted on the roof, the arrow can be accessed through the hatch on the roof that flips back. The place of the arrow has ballistic protection in the front and sides.

The unprotected version of the same Kia chassis is used as the base for the Taka MLRS with 12 107-mm guides also developed by MIC. 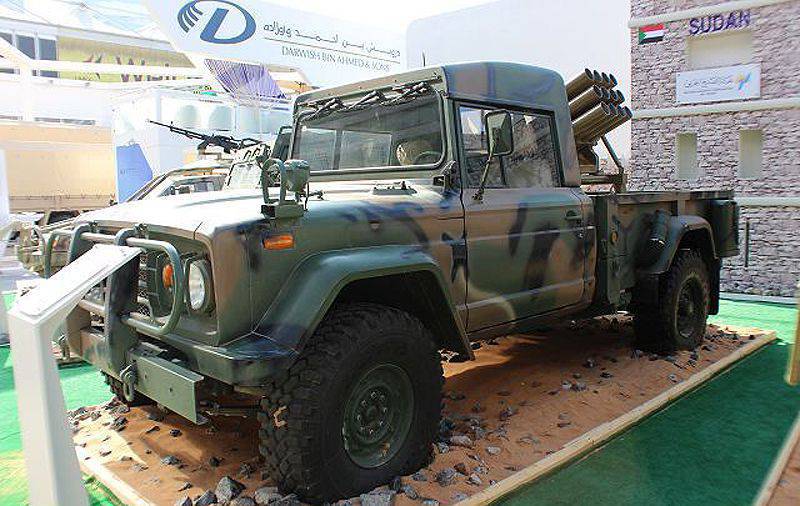 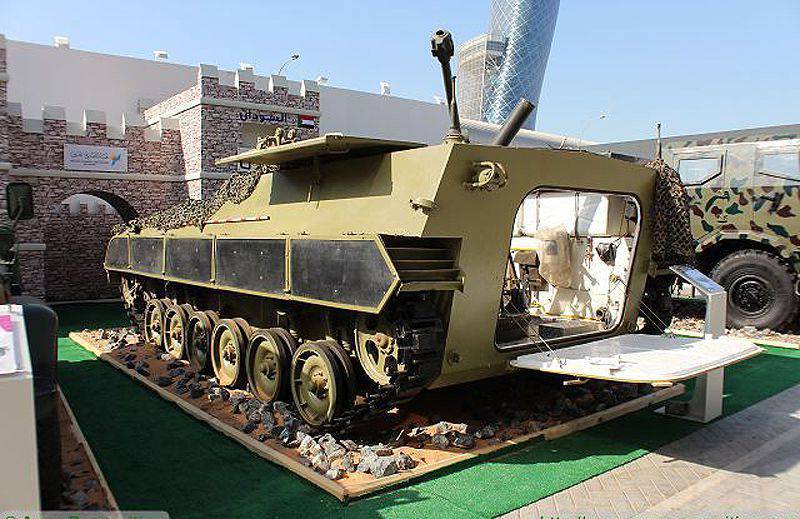 Although Sudan is constantly increasing its range of weapons systems and vehicles, offering them for export, the overwhelming majority of them are not original local developments.

Nevertheless, although some of the Sudanese armored personnel carriers are almost completely identical to their original foreign counterparts, some of them were modernized to meet the needs of the country or based on a foreign-made chassis with an armored hull manufactured in Sudan.

The Iranian roots Khatim-1 and Khatim-2 symbolize the close connection of the defense industry of the two countries. It is claimed that many weapons and equipment systems are currently being manufactured in Sudan, but there are clear Iranian imprints on all this.

Ctrl Enter
Noticed oshЫbku Highlight text and press. Ctrl + Enter
We are
Armament of domestic armored personnel carriersFamily BTR-60 / 70 / 80 in combat
11 comments
Information
Dear reader, to leave comments on the publication, you must to register.