It has always been and will be that new species weapons Immediately provoke the creation of new types of protection. And if this process also occurs within the framework of the interaction of two cultures, then, as a rule, a less developed culture borrows something from a more developed one. The same happened to the Japanese, who, in 1547, met Europeans with firearms, saw their unusual clothes and armor. And as soon as firearms came into use in Japan, the “modern armor” tosey gusoku immediately appeared, and to them new helmets, which were significantly different from those that existed before. First of all, the Japanese began to make all-metal helmets on the model of European cabaret helmets, which European merchants sold them as wonders. Pikinerskie "sweat" helmets also came to the Japanese to taste, but most importantly, the technology has changed. 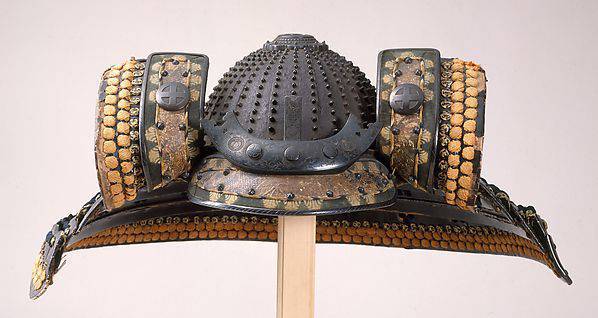 Now the helmets of three courses of metal — the central plate and two side plates — which were fastened to each other on rivets and attached to the rim around the head, or even one, became common. Such helmets no longer had a luxurious look, and therefore, in order to stand out in powder smoke, samurai began to put on top of these helmets made from lacquered paper and bamboo tops, which allowed each of them to be easily recognizable. These helmets began to be called kawari kabuto or “curly helmets”. Fukigaeshi's cuffs on them now either didn’t do at all, or they became very small, turning from an element of protection into a tribute to tradition.

The officers, however, still ordered luxury helmets made from 32, 64 and even 120 plates, which were required before 2000 rivets. But in this case too, the tops of the most fantastic kind were strengthened on it, which could not so much frighten the enemy as much as make laugh. 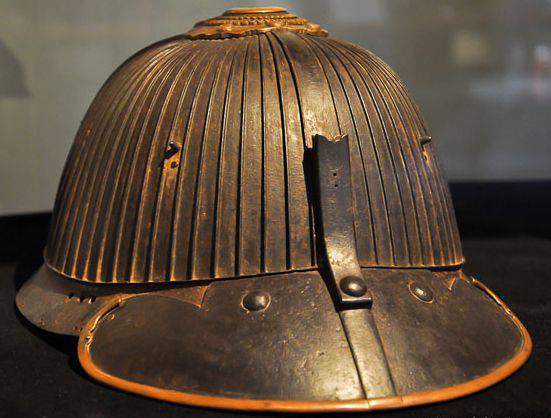 For example, Fujisan helmets appeared with high tops in the form of the sacred mountain of Fuji for every Japanese. The hakkaku-kasa helmets resembled an octagonal umbrella; in kabuto kamas, the pommel was of the mat; Boosi's helmet resembled a European cylinder with fields (!), but had a front mirror to scare away evil spirits. 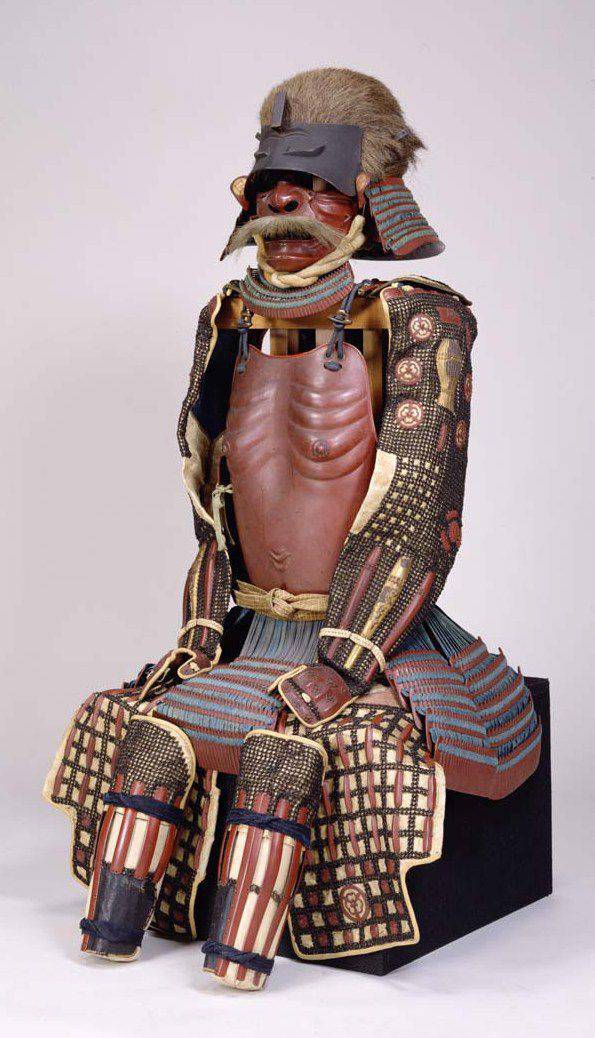 The armor of the tosei gusoku with the no-do cuirass is the “torso of the Buddha.” Helmet - Yaro-Kabuto. Metropolitan Museum, New York.

The helmet of Yaro-Kabuto was entirely covered with bear fur or ponytail, but on the helmet Tonkin Kabuto fur was used only in helmet ornaments. Note that on the sides of the fiercely kabuto, to heighten the effect, a pair of pink ears, of a completely natural look, was also attached! 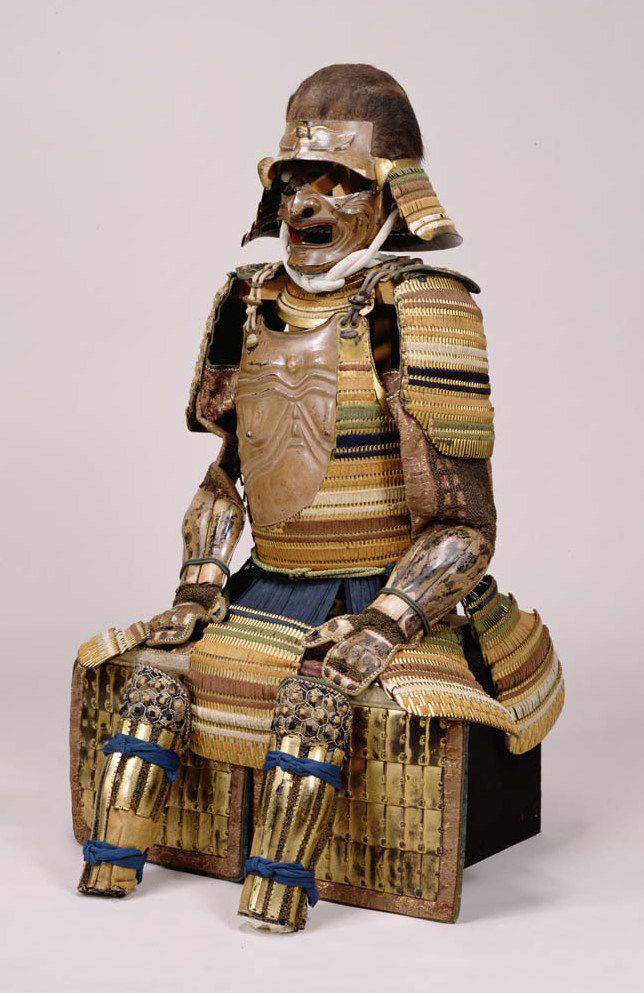 On some helmets, decorations were not located in the front, but in the back, but there were such samurai that decorated the helmets on both sides at the same time! The fantasy of the masters truly knew no bounds, so for some people the helmet was made in the form of a “curled slug”, a “sea shell” and even in the form of ... a “blizzard” (who could have thought of it except the Japanese ?!)! . In fact, this technology was no different from the practice of decorating medieval European knight helmets. After all, they also fastened a variety of shapes and emblems made of "boiled leather", painted plaster and papier-mâché!

However, thanks to this, many commanders were easily recognized on the battlefield. So, Kato Kiyomasa (1562 - 1611) wore a helmet with a top piece in the form of a high court headgear of silver color and a red sun disk on both sides. It is clear that he stood out among the masses of samurai and was visible from afar.

Maeda Tosiye (1538 - 1599) and his son Toshinaga wore similar helmets — one entirely golden in color, the other also “silver” (according to their rank!), And, moreover, they had sections of horsehair fringe. Often such helmets were hoisted onto a pole and carried to the battlefield, where they played the role of heraldic signs symbolizing the commander's person. Another well-known sign of a famous commander was the horns of a water buffalo (usually gilded!) - suiguri-no-vakidate. But Kuroda Nagamasa (1568 - 1623) - one of the commanders Ieyasu Tokugawa had a helmet shaped ... "sheer cliff." In theory, this was supposed to remind of the 1184 battle of the year, in which one of his ancestors covered himself with glory, having fallen upon the enemy with his cavalry from such a steep cliff, that everyone was amazed at how impossible it was! The helmet of another Ieyasu associate - Honda Tadakatsu (154 - 1610) was decorated with huge deer horns. The samurai helmets Date Masamune (1567 - 1635) and all his soldiers were distinguished by an asymmetrical golden crescent!

The infantry recruited from the peasants had the simplest helmets you could imagine. These were mainly iron hats, riveted in the form of a cone - that is, a simple straw peasant hat from a single sheet metal. However, they were likewise varnished to protect against rust, and the emblem of the ruler, who served as an infantryman, was applied in front. Commander Ieyasu Tokugawa advised his soldiers to use such helmets, called jingasa, as dishes for cooking rice. So it is unlikely that after that any image could be viewed on them and, most likely, every time before the battle or holiday these signs were painted anew. However, the option of jingas, resembling a bowler hat with wavy fields, did not consider it shameful to wear even samurai, which was apparently done under the influence of fashion and, perhaps, show “closeness to the people”. Similar examples in stories well known not only in Japan. 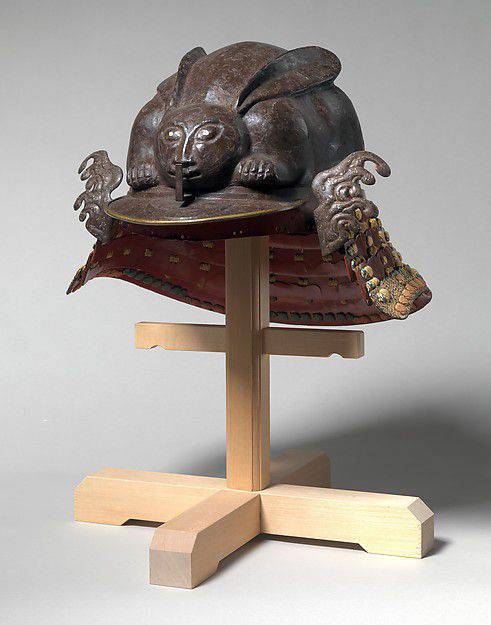 Helmet "Crouching Rabbit" XVII century. Metropolitan Museum, New York.
A very original type of helmet, worn by samurai and ordinary infantrymen to ashigaru, was a “folding helmet” or a ёetin-kabuto. They were made of metal hoops connected by cords, so their design was a ... modern folding tourist cup. Therefore, such a helmet could be easily folded and made completely flat, and, accordingly, it is convenient to transport and store. The tatami kabuto (“folding helmets”) consisted of trapezoidal metal plates connected by chain mail and sewn onto durable fabric. They were worn with the same tatami-do folding armor. 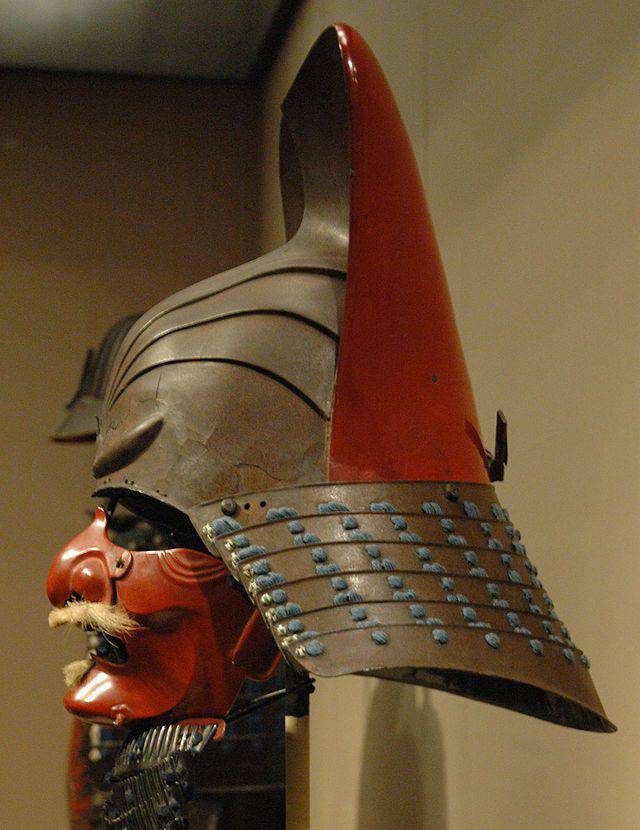 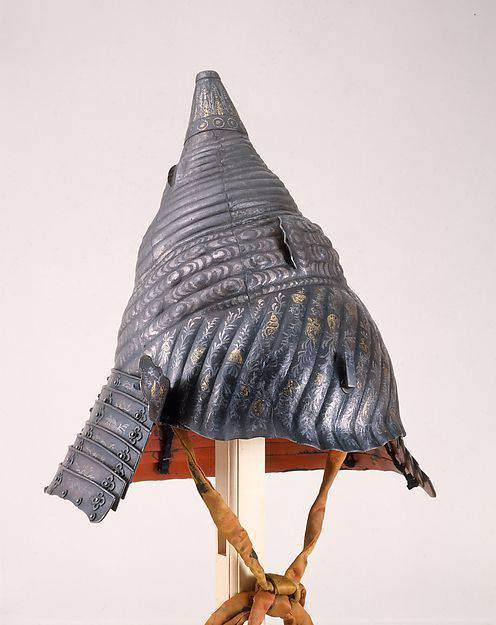 Another shell-shaped helmet. The Japanese living by the sea liked this form ... Metropolitan Museum, New York

Cabinets among the Japanese became quite popular, and such helmets were called namban-kabuto - that is, “helmets of southern barbarians”. The samurai wore them together with the European cuirass - namban-do ("the southern barbarians' cuirass"), although among them there were often products made by local gunsmiths than imported armor, which were very expensive. Well, and local craftsmen have learned very well to fake them. 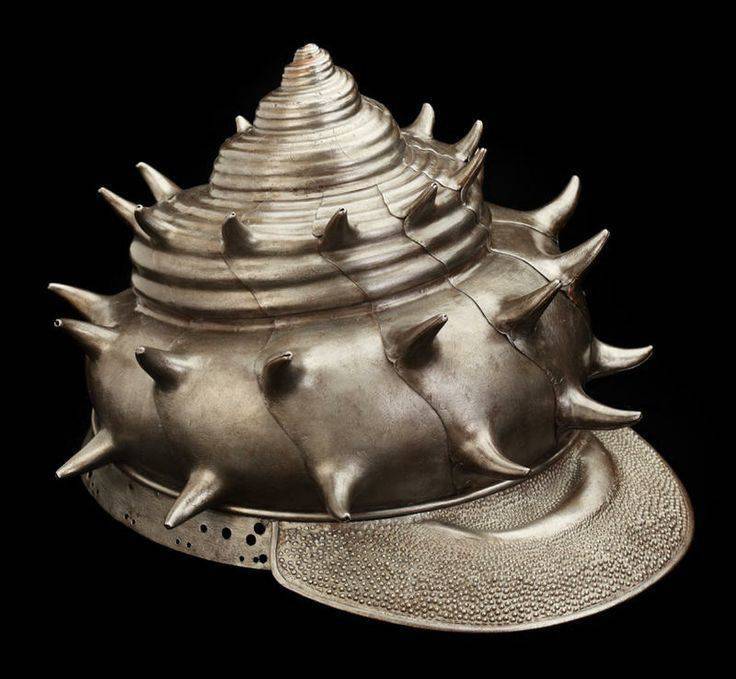 A kawari-kabuto helmet in the shape of a sea shell. Edo Epoch. The Anna and Gabriel Barbier-Muller Museum, Dallas, Texas.

A variation of this helmet was the mononari kabuto (“helmet peach”), the surface of which was often gilded or painted. By the way, the legendary Ieyasu Tokugawa at the battle of Sekigahara wore the helmet namban-kabuto, as well as the European-style cuirass and did not hesitate for his unpatriotic adherence to Western armor. The Japanese would not be Japanese if they did not bring something of their own into it. In this case, it was expressed in the fact that they wore Western helmets backwards, apparently wearing them that way for some reason they liked more! 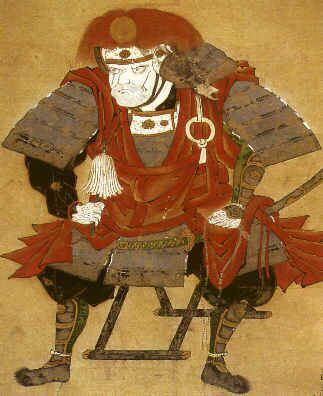 Commander Takeda Shingen in a “furry helmet” of a fiercely kabuto.

However, in addition to solid-forged helmets, large quantities were made of helmets made up of 8 plates intended to equip entire armies, although most noble warriors and even more so warlords despised them. But around 1550 of the year in Japan, dunari-kabuto (“in the shape of the head”) appeared - a very simple and functional product, the top of which was assembled from only three parts. 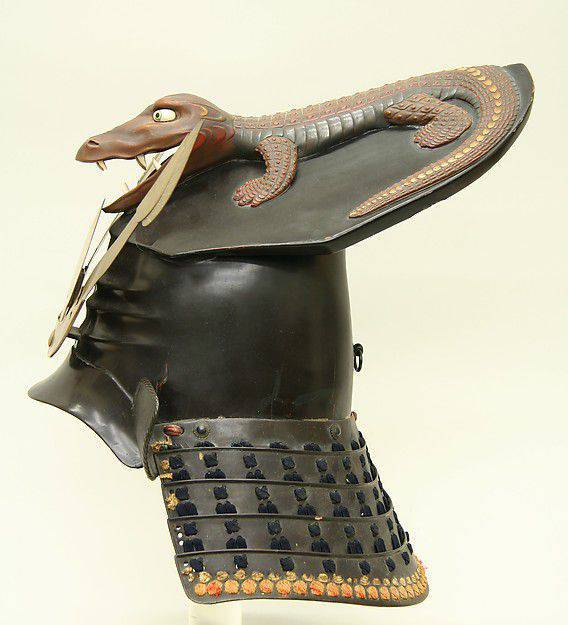 Kawari Kabuto XVII - XIX centuries. It is clearly seen that this magnificent and absurd pommel attached to a simple and functional helmet dzunari-kabuto.

In fact, it was a real helmet, very similar to modern designs, with a small visor and a backrest, made of metal of such thickness that the arquebus did not break through the bullets! The strength of this helmet especially attracted the daimyo and the rich samurai, who highly appreciated his protective qualities, despite the simplicity of the design they so disliked. To hide this flaw, it was on these helmets that they began to pile up various ridiculous ornaments, although under them they all had exactly dzunari-kabuto! 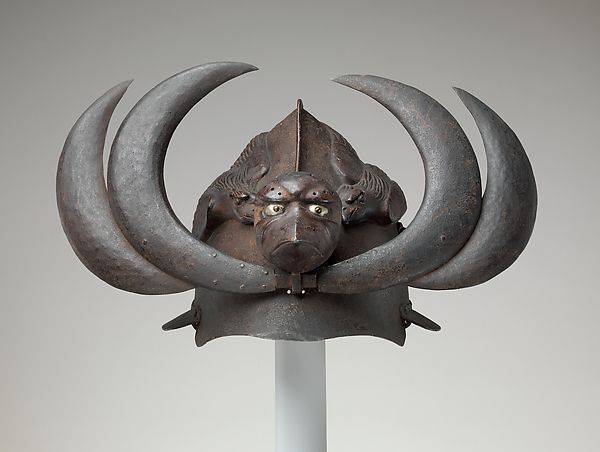 How expensive were Japanese helmets? This can be judged from the following example. Only the restoration of the helmet of the master Miochin Nobui, made in 1534, in 1865 was evaluated at 19 ryo, which would be equal to the cost of 57 grams of gold. And while it is impossible, of course, to forget that the price of gold has increased greatly since that time! 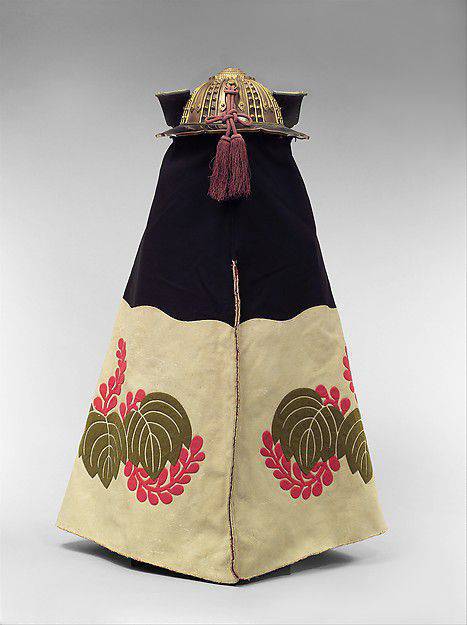 The author is grateful to the Antiques of Japan Company (http://antikvariat-japan.ru/) for the photos and information provided.

Ctrl Enter
Noticed oshЫbku Highlight text and press. Ctrl + Enter
We are
White armor and colored armor ... (part two)“White” and “colored” armor ... (part one)
8 comments
Information
Dear reader, to leave comments on the publication, you must to register.