In the Russian Federation, the development of heavy wig

5 September 2015
213
TsKB them. Alekseeva completed work on the conceptual design and began to develop the technical design of heavy ekranoplan A-050, reports MIC With reference to the head of the enterprise Georgy Antsev.

“Works on the A-050 ekranoplane takeoff weight of the 50 t order are carried out within the framework of the development budget of the enterprise,” Antsev said.

He noted that "the level of preparation of the project today is such that the company is ready to begin construction of the head sample." In parallel, negotiations are underway with potential customers of the machine.

“A-050 will be equipped with fully Russian avionics and modern navigation and aerobatic complex, developed in conjunction with the Aviation Equipment Research Institute,” he said. - The ekranoplan has very good aero-hydrodynamic characteristics. He successfully passed the tests in the wind tunnel and at the hydro channel. ”

According to Antsev, the Central Clinical Hospital in recent years "has risen to its feet: many different levels of research and development have been carried out in the speed fleet, in the wing, in the cavern and in ekranoplans, including in the interests of the Ministry of Defense." “TsKB them. Alekseeva regained the former laboratory and bench equipment, almost completely restored the laboratory research and, in part, production potential, ”he said. 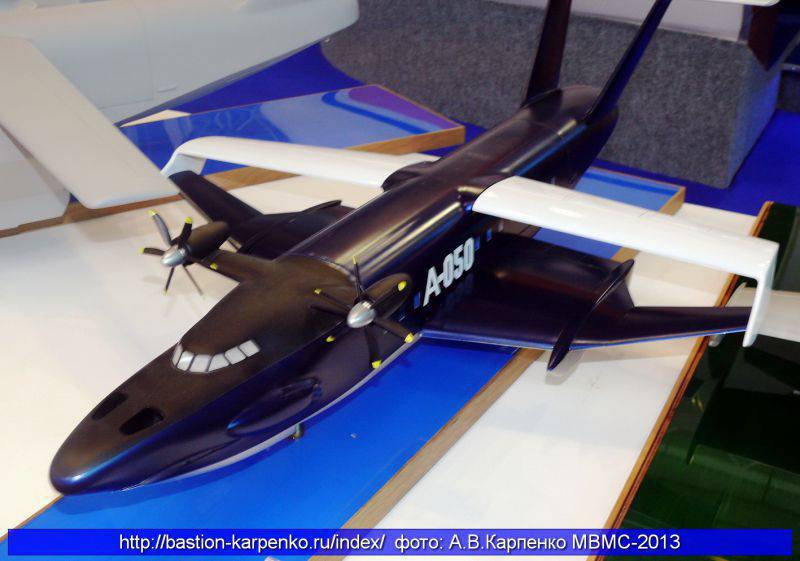 We are in Yandex Zen
Russia has developed a project of a new marine wig
The development of a heavy ekranoplan of the ocean zone has begun.
213 comments
Information
Dear reader, to leave comments on the publication, you must to register.