The Taliban showed video with their Omar 1 rocket 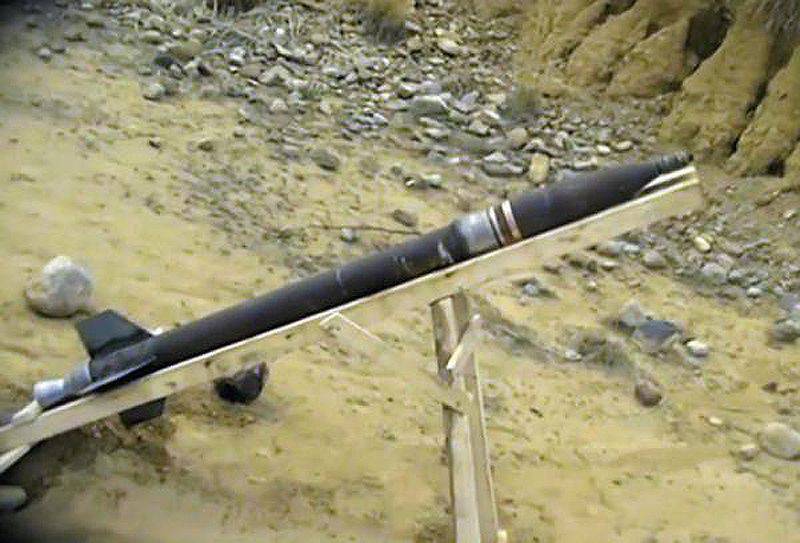 In this frame, a video taken by Tehreek-e-Taliban Pakistan in April 2015, it is clear that its announced Omar 1 rocket is the same coarsely crafted as the Qassam rockets used by the ad-Din al-Qassam brigades in the Gaza Strip

A video posted online by the Pakistani branch of the Taliban Tehreek-e-Taliban Pakistan (TTP) shows the assembly and launch of a ground-to-ground Omar-1 rocket, which this group calls its own successful project. It is said that it was designed by the engineering department of the group, which was previously responsible for the development of vests for suicide bombers.

The group did not provide any detailed characteristics of this rocket.

According to TTP spokesperson Mohamed Hurassani, the Omar 1 rocket "can be easily assembled and disassembled depending on the situation." He said that her combat effectiveness would be a surprise for the enemy being shot at.

From the TTP video, it is clear that the Omar 1 is not a guided missile, but a small unguided solid-fuel rocket, similar in size and concept to the early Qassam missile versions, developed by the Izz ad-Din al-Qassam brigades in the Gaza Strip.

One of the parts of the video shows a powdered material that is supposedly the starting material for rocket fuel, as well as heating a portion of molten solid rocket fuel. This is possibly the same solid fuel used in the Palestinian rocket. The mixture of sugar and molten fertilizer - potassium nitrate is then poured into the mold and cooled to a solid state. A vertical metal tube installed on the video is possible and is a form for casting a solid fuel charge.

In one of the parts of the video, apparently, fabric panels are shown, smeared with, possibly, some kind of a binder and wound around the outer surface of a cylindrical object. This may be a method of obtaining an insulating gasket, which is placed between the inner surface of the metal body of the engine and the solid fuel charge.

The close-up of the nozzle before mounting it on the engine indicates that it may have been machined on a lathe. A similar nozzle was used on early Qassam rockets, but was soon replaced by a group of seven small nozzles. This configuration was intended to minimize the effect of small manufacturing defects.

The launcher on the video is a simple wooden structure without any adjustment of the vertical angle of the rocket.

When launching, the rocket emits dense white smoke, before it reaches the full thrust, after detachment from the launcher, a dense white jet stream spreads behind the rocket. These signs are similar to those of the Qassam series of rockets; this suggests that the Omar 1 uses the same fuel as the Palestinian rocket.

While Tehreek-e-Taliban may claim the Omar 1 is effective weapons, in practice, it will have the same minimum accuracy and combat effectiveness as the Palestinian Qassam missiles.

Materials used:
www.janes.com
www.youtube.com
en.wikipedia.org
Ctrl Enter
Noticed oshЫbku Highlight text and press. Ctrl + Enter
We are
"IG" in Afghanistan. Will the war come to Central Asia?Situational analysis of the death of the MH17 flight (Malaysian Boeing 777), made on the basis of engineering analysis from 15.08.2014
11 comments
Information
Dear reader, to leave comments on the publication, you must to register.