US decided to dictate the rules of the Black Sea 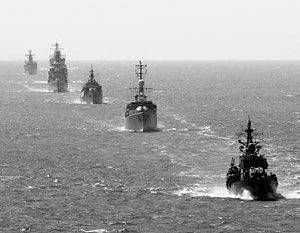 During the start of the NATO and Ukraine Sea Breeze exercises, the commander of the 6th fleet US Navy Vice Admiral James Foggo has promised to use the "right to free shipping" for the permanent presence of the US Navy in the Black Sea. In addition, the United States called for the development of a code of conduct for military sailors in the Black Sea, as well as the modernization of the Ukrainian Navy.


The US Navy "is trying to maintain an almost permanent presence in the Black Sea," said on the eve of the commander of the US Navy's 6 fleet, James Foggo. Vice Admiral Foggo referred to the rule of freedom of navigation in international waters.

The statement by the commander of the 6 fleet was timed to coincide with the NATO-based Sea Breeze 31 exercises that began on August 2015. In these multinational exercises, taking place in Ukraine and in the waters of the Black Sea, the American missile destroyer Donald Cook, the main weapons which are cruise missiles "Tomahawk", having a range of up to 2,5 thousand. Km and capable of carrying nuclear warheads.

Vice Admiral Foggo stressed: this time, Sea Breeze’s teachings (in which, apart from the US and NATO allies, Ukraine, Moldova and Sweden are taking part), are held in a “somewhat more tense geopolitical situation” due to the conflict in Ukraine and the deterioration of relations with Russia.

The commander of the 6 fleet also said: the command of the US Navy believes that naval sailors from different countries could endorse for the Black Sea the same general code of conduct that operates in the Pacific Ocean. “Last year, the countries of the Pacific region adopted the“ Code of Conduct for Unplanned Contacts at Sea ”- a kind of“ gentlemen’s agreement ”that increased security and strengthened mutual trust between military fleets,” Foggo said.

The United States designated the military presence in the Black Sea, not only through demonstration destroyer near the coast of the Crimea. As the correspondent of the newspaper LOOK, on ​​Thursday in the Georgian port of Batumi offers equipped American-based item.

"They do not care at all"

The commander of the Black Sea Fleet in 1998 – 2002, and now the head of the State Duma Defense Committee, Admiral Vladimir Komoyedov noted in the comment to the VIEW newspaper: when the operational connection BLEKSIFOR was created, which included all the Black Sea countries, there was neither North America nor other non-Black Sea countries ". The US statement on the desire for a permanent presence in the Black Sea, he called the "lunge of America, which had derailed, stood on the wing and flew." “They don't care about everything related to international rules that have been established without them,” the source said.

Speaking about the opening of a US-based home base in Batumi, Komoyedov noted: “The Georgians, of course, are“ well done ”. More there and the Americans were admitted. I understand that they definitely want to break completely. ”

It remains for Russia to “only strengthen its positions in all areas on the Black Sea,” emphasized Admiral Komoyedov. In his opinion, this is a question of the present, not of the future, as they were engaged in, even when Crimea was not part of Russia, in Novorossiysk, for example, they built a basing point for new ships that are being built in Kaliningrad and St. Petersburg specifically for Black Sea Fleet. “So we will not abandon this matter, we will bring it to mind,” Komoyedov stressed. He recalled that with the entry of the Crimea into Russia, the bays returned, adapted for the basing of ships of all classes - first of all, in Sevastopol. “There are other ports, naval bases, the same Theodosius and others. Therefore, there will be enough funds to accept new ships and submarines, ”the parliamentarian noted and said:“ The US will always be visiting the Black Sea, and we will be at home - these are two big differences. ”

In addition, the commander of 6, the American fleet, announcing his meeting with Prime Minister of Ukraine Arseniy Yatsenyuk, said that Kiev needs to modernize its naval forces - "perhaps it is about adding new warships, as far as their budget allows" . We note that Yatsenyuk, speaking at the opening of the exercises Sea Breeze 2015, announced: the naval forces of Ukraine will return to the Crimea. 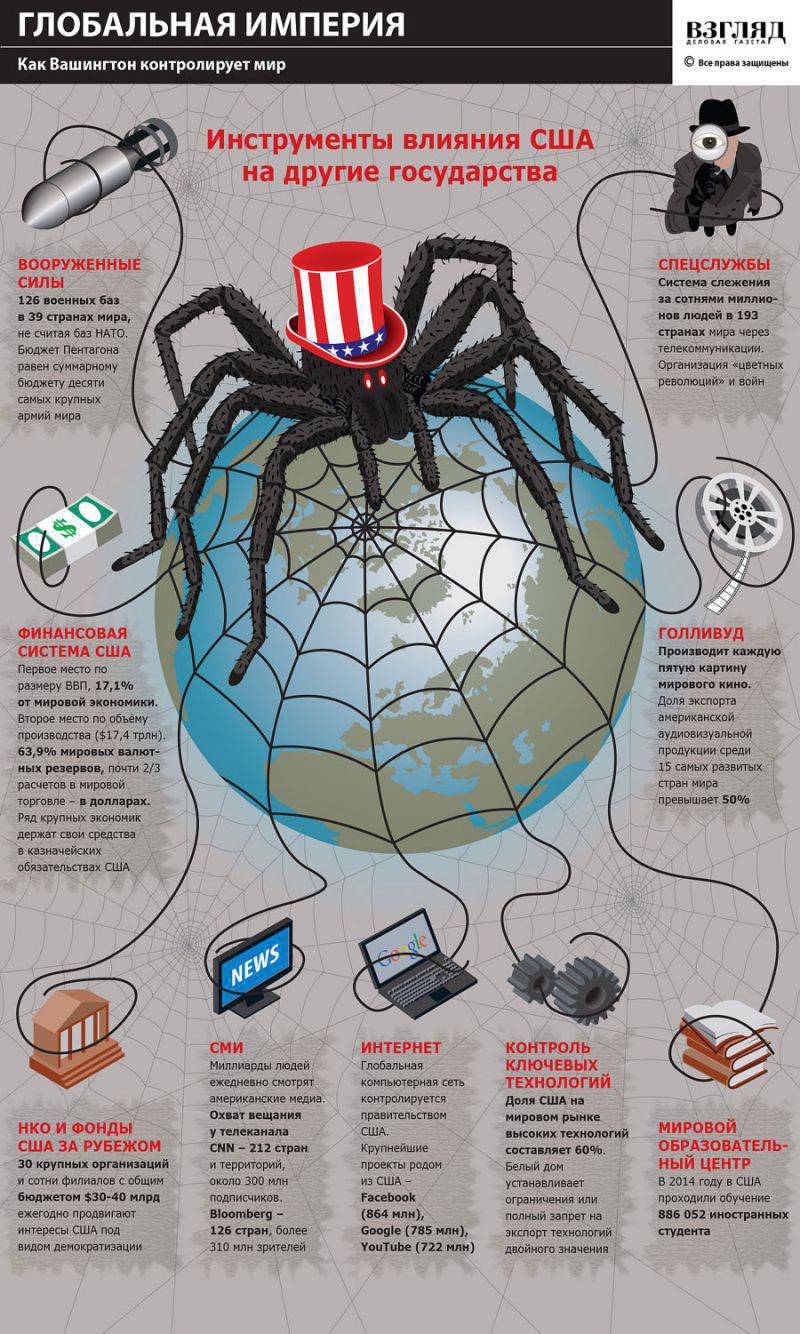 How the United States controls the entire planet
The current "Sea Breeze" - the most ambitious for all history these NATO exercises. Up to 2,5 thousand military servicemen take part in them (of which 1 thousand represent the US Army). In addition to the destroyer Donald Cook, the Pentagon sent four more warships, as well as two submarines, 6 airplanes and helicopters, and 40 wheeled vehicles. The host country, the Ukrainian army, deployed 1 thousand soldiers, nine Navy ships, a dozen border patrol boats, 8 airplanes and helicopters, and up to 50 wheeled vehicles.

The fourth-generation rocket destroyer Donald Cook, equipped with the Aegis combat control system, is a frequent visitor to the Black Sea. 8 of April of last year, the Pentagon said that the ship will be sent to this area "as part of a demonstration of support for Eastern European allies, concerned about the strengthening of Russian troops along the border between Russia and Ukraine."

The spectacular demonstration failed - April 12 2014, the Su-24 Russian Air Force overflew the American destroyer at a distance of about 1 km and at an altitude of about 160 meters above sea level. Reports on this “counterdemonstration” claimed that the Russian plane used the Khibiny electronic warfare complex (KREB), as a result of which the American ship was forcibly turned off the radar, combat control circuits, data transmission systems. After the Aegis system was turned off, “Su-24 simulated a rocket attack on a blinded and deafened ship, then another and another — only 12 times,” the Rossiyskaya Gazeta reported. The US military did not confirm these reports (limiting itself to the words that the Russian pilot "used standard intimidation"), but, be that as it may, Donald Cook retired to the Romanian port of Constanta.

In April of the same year, this destroyer participated in exercises joint with the Turkish Navy, and in January 2015 of the year - in joint maneuvers with the flagship of the Ukrainian fleet, the Hetman Sagaidachny frigate.

The destroyers of missile control (destroyers of missile-defense systems) of the class “Arly Burk”, to which Donald Cook belongs, replace each other in the Black Sea with enviable regularity. In October 2014, the destroyer Cole entered the same Romanian Constanza, at the same time this port was visited by the command ship 6 of the fleet Mount Whitney. Less than a month later, the American destroyer Ross arrived in the Black Sea to “improve combat readiness” of the Romanian fleet.

At the end of June of this year, the Laboon URO destroyer, sent to the Black Sea to "promote peace and stability in the region", took part in joint exercises with the Roman Navy corvette "Eustatiou Sebastian". The same ship also entered the Georgian port of Batumi - as France-Presse reported, “in order to demonstrate support for Georgia — a candidate member of NATO”; the ship held a joint training with the coast guard of Georgia. In July, Laboon was replaced by the destroyer Porter, who began his “tour” of the Black Sea from entering the Bulgarian port of Varna. And finally, admonishing Donald Cook, Admiral James Foggo said: "We are striving to make our presence in the region normal."

It is obvious that before the reunification of Crimea with Russia, the Pentagon considered Sevastopol as one of the key points of the “normal presence” of the USA in the region. Recall that in August 2008, the news of the arrival on the Sevastopol raid of the command ship 6 fleet Mount Whitney provoked mass protests. Later, the ship still entered the port, but the team was unable to reach the city because of the protesters. Note that the US ambassador in Kiev Jeffrey Payet, speaking at the opening ceremony of Sea Breeze 2015 in Odessa, called this city, where the Ukrainian Navy is now based, "the temporary home of the Ukrainian fleet." The head of the diplomatic mission once again emphasized that Washington considers the annexation of Crimea to Russia as an act of “illegal military annexation.”

Note that the naval exercises Sea Breeze (from 1997 held in the framework of bilateral cooperation between NATO and Ukraine) caused mass protests in Nikolayev and Odessa regions, often accompanied by clashes. Double maneuvers were disrupted, in particular, because of the resistance of local authorities.

The USA’s desire to have a permanent presence in the Black Sea contradicts the international agreement - the Montreux Convention of 1936 on the status of the Black Sea Straits, which restricts the presence of non-Black Sea warships, determines the class of these ships, and so on, military expert, editor-in-chief of Arsenal magazine told the VZGLYAD newspaper. Fatherland "Victor Murakhovsky. He noted that “the revision of this convention is impossible. Therefore, the United States must comply with it fully and send its ships to the Black Sea on a rotational basis. ”

The expert explained that the item was created in the Batumi-based, rather than a military base. These berths are equipped with a supply of ships with fuel, water and other supplies.

At the same time, it must be recognized that most of the countries that enter the Black Sea marine basin are members of NATO: Bulgaria, Romania, Turkey. “Therefore, in a military sense, nothing new has appeared for us. On the contrary, recently we have gained fairly strong positions there due to the fact that we have now created an interspecific self-sufficient group of troops on the Crimean peninsula, ”the source said. - Now we are our aviation from Crimea, with anti-ship missile systems we can actually control both the Black Sea straits and the Black Sea basin. ”

Ctrl Enter
Noticed oshЫbku Highlight text and press. Ctrl + Enter
We are
NATO has a version of why Russia has ceased to "interfere" with its teachings.Rules for all. In the Caucasus, will write a "code of conduct" for Russian
196 comments
Information
Dear reader, to leave comments on the publication, you must to register.