Ukrainians began the second world war. Ahead of time 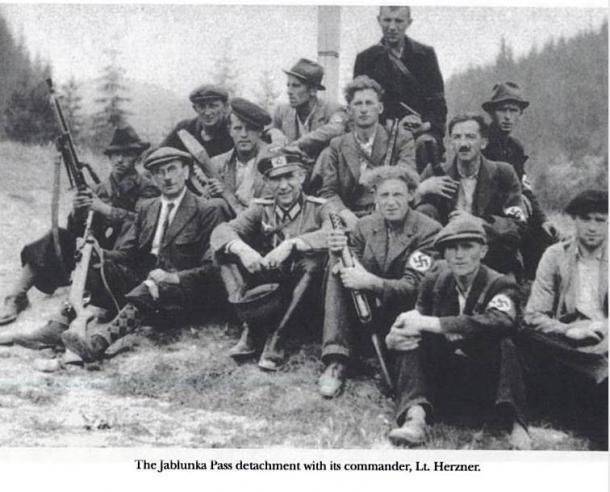 The Second World War actually had to start on August 26 and go on as 1 days by September 5. 28 man started it, but I never thought that Ukrainian trace would be found here. However, I found it.

The commencement of hostilities was scheduled for 4.26, Berlin time, 26, August, 1939. Last night, OKW received an order to postpone September 1 and managed to bring this information to all units and combat groups - except for one.

The reconnaissance and sabotage group of the 2nd Abwehr Division in the number of 28 people, under the command of Lieutenant Herzner, was to capture two railway tunnels on the Yablunkovsky Pass, on the Polish-Slovak border. In the evening of 25, she had already moved forward to the baselines, and her radio did not catch the stop order in the mountains.

As a result, before the dawn, the saboteurs of Herzner, after removing the sentry, captured the Polish platoon of mountain shooters of the 4-th Podhalyansky regiment and police at the station Bridges in 1,5 km from the tunnels. And then they were locked in the station barracks together with the Polish miners who arrived at the station on the first morning train.

And here, to Herzner, he did the same by the walkie-talkie radio (according to another version, he contacted his people on the other side of the border directly by phone). At 6 in the morning, the Germans broke up into small groups and began to leave for the border.

Further Polish and German sources diverge. The Poles claim that the brave telephonist managed to warn the border guards guarding the tunnels, and they drove away the saboteurs who had tried to penetrate them. The Germans also declare that the core of the battle group, sowing locomotives, broke through the tunnels, at the same time cutting the wires to the charges of explosives.

The commander of the German 7 Infantry Division, Major General Ott, in whose interests the reconnaissance group acted, brought official apologies through the envoy to the commander of the Polish 21 Mountain Division, General Kustron. The case was presented as an "incident caused by a mad man acting on his own behalf."

The Poles pretended to believe, but the tunnel blasting system, of course, was restored - and the 1 of September, the sappers jerked them even without an order, as soon as they heard the first shots at the border.

What does the Ukrainians have to do with it? Given that for actions on the territory of Poland, Abwer needed people who could speak Polish fluently. It is clear that it was difficult for them to sign ethnic Poles for their affairs, but Ukrainians were easy. See the photo above? It depicts the backbone of the Herzner reconnaissance group conducting this operation.

In the center he himself is in German uniform, everything is as it should be. And there in that high uncle in black that stands behind everyone, the Ukrainian comrades easily recognize Roman Shukhevych. The future head of the OUN-UPA.

Everything converges with his biography: from 1938, Shukhevych lived in Germany, underwent military training in Munich, and in 1941, he became deputy commander of the notorious Nachtigall battalion, who supervised Herzner in the central administration of Abwehr.

In 1950, Shukhevych will be eliminated by a special group of the MGB near Lvov. Herzner, according to the official version, accidentally drowned in 1942 year.

Why say “official”? The fact is that Peter Hoffman, in his monumental History of the German Resistance, 1933-1945, names Herzner as one of the conspiratorial insurgents who were to make an escort of General Vitleben in the autumn of 1938. In the fall of 1938, Witzleben intended to come to Hitler, and while his escort neutralizes the SS short pots of the Nazi guards, it is polite to invite the Führer to sign a renunciation.

So then turn around in a different way, Herzner would be famous for not a special operation on the Yablunkovsky pass ...

Ctrl Enter
Noticed oshЫbku Highlight text and press. Ctrl + Enter
We are
In the program "Rise" Sergey Dorenko talked with the ex-Minister of Defense of the DPR Igor StrelkovResponsible for everything combat
26 comments
Information
Dear reader, to leave comments on the publication, you must to register.