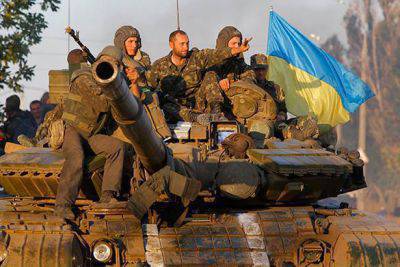 The shelling of Novorossia by the junta has almost ceased due to Poroshenko’s Berlin flogging and the objective obstacles to the attack on the Donbass. Some observers believe that the junta will still go on the offensive somewhere on September 20, podgadav him to the speech of Russian President Putin at the UN General Assembly, as happened with the attack of Saakashvili on South Ossetia 08.08.08, when Putin attended the Beijing Olympic Games. Because everything is ready, and the troops can not wait long for orders.


They do not take into account that the Wehrmacht Bandera had already tried to launch the August 17 offensive, and Putin then pointedly went to the Crimea, where he expressed the hope that large-scale clashes would not occur. And so it happened, and the junta burst into tears, that two powerful artillery strikes were made at the locations of its troops (advanced to the offensive). So after all can happen again, and Bandera feel it, probably, his battered skin.

For political reasons, the junta had to launch an offensive before 31 in August in order to thwart the very consideration of amendments to the Constitution of the Verkhovna Rada, according to the Minsk agreements, and she really tried to do it. After the adoption of these amendments, even if legally insignificant and in the first reading, contrary to the “Minsk-2”, the attack on the Donbass, politically, lost its meaning.

The Nazi “Freedom” and other “patriots” armed action at the walls of the VRU 31 of August is a reaction not so much to the adoption of constitutional amendments, although for crazy “Nazi-patriots” this is enough as indignation against the breakdown of the summer offensive on the Donbass. Poroshenko is trying to remove this outrage, and pours new curses and threats against Russia in order to at least somehow reassure his Nazis.

The National Security and Defense Council of Ukraine came up with the idea that in the Military Doctrine "determined Russia as a military adversary." But the Nazi volunteers know because the real situation at the front and the state of the army, it can be defined maxim "Bandera Cossacks tired." Tired of the endless standing in the steppe, the heat, the squabbles between the APU and the Nazi battalions, and the absence of any prospects.

If the junta does launch an offensive in September, it will make a very big mistake. The result will be approximately August, but most likely, the local elections of 25 of October will be broken (postponed), but the Novorossiysk republics will do everything to hold the October elections on their territory, and they will. And then, to sum up the “Minsk-2” at the end of December, it turns out that Donetsk and Lugansk fulfilled the Minsk agreements, and held elections, but Kiev - no! And Moscow will get a winning position when summing up the results of Minsk-2.

However, an apocalyptic scenario is possible, if the junta leaves Washington for the last battle until the last Ukrainian, and promises military assistance at a crucial moment. That is, Washington will make one last attempt to unleash a big war in Europe, with the European Union and Russia being drawn in.

But then, before that, a major terrorist attack should have been committed in Ukraine, such as the destruction of the Malaysian Boeing. Alternatively, the United States can repeat the “Tonkin incident” in the Black Sea, stage the attack on the NATO ship of the Russian Navy. By the way, the teachings of NATO fleet will be held in the Black Sea this week until September 12th. However, all this is too much on the surface, too obvious, and most importantly, Russia makes it clear that it is ready to fight, in an adult way ...

The likelihood of American pressure to such an extent of confrontation, across Europe, is still small, given the migration crisis in Europe and the presidential election campaign that has begun in the United States. Although, given that crazy neotrotskyists are in power in Washington, with the mania of the world permanent democratic revolution, it cannot be rejected to the end.

Note that Berlin, Paris and even Washington responded coldly to the “Kiev implementation of the Minsk Agreements” on August 31, as Poroshenko announced. In my opinion, they did not even congratulate, only expressed concern about the bloodshed at the walls of the Rada. And Vladimir Putin noted that amendments to the constitution of Ukraine should be coordinated with the Donbas. These are all very bad signals for Bandera.

Donbass recently visited with concerts Joseph Kobzon, and said including that "the Pitmen on their land, fighting for freedom and independence." Before that, Putin personally helped Kobzon to negotiate with the Germans that he undergo treatment in Germany, despite the sanctions. There is a feeling that Kobzon gave Putin’s words to the Donetsk citizens, that is, according to the results of the October elections, Moscow recognizes Donetsk and Lugansk.

... The announcement of Russia as an “adversary” in the Military Doctrine can be costly for Banderia. Recall that the energy crisis hit the junta in the summer, Bandera still has neither gas, nor coal, nor money to go through the winter heating season.

In the new "military" conditions, they will give Russia a reason to cancel all the discounts, and even impose sanctions on the "likely opponent." It is a dangerous business to supply even coal to Kiev. After all, they can blame that they threw a bomb with coal, and as a result some kind of power plant exploded. In relation to the enemy, the lie becomes just a “military cunning”, now it is officially recorded in the Military Doctrine of the junta.

Ctrl Enter
Noticed oshЫbku Highlight text and press. Ctrl + Enter
We are
Situational analysis of the death of the MH17 flight (Malaysian Boeing 777), made on the basis of engineering analysis from 15.08.2014Results of the week. “You are already indebted to the sea: neither the bottom nor the coast”
45 comments
Information
Dear reader, to leave comments on the publication, you must to register.