7 September 2015
8
The pontoon park is intended for arranging ferry and bridge crossings over water barriers on the way of troops movement. The pontoon park PP-91 was developed at the 15-m Central Research Testing Institute of the Ministry of Defense named after DM Karbyshev. It was created on the basis of the PPS-84 pontoon park, which was reduced to a battalion. Instead of the BMK-460 boats, its structure included towing and motor boats BMK-225 and MZ-235 motor links. Bridges of 60, 90 and 120 tons as well as ferries with a carrying capacity from 90 to 360 tons can be created from the material part of the new pontoon park.


The kit of this park is in service with a pontoon-bridge battalion consisting of two companies. In our army, the park PP-91 came to replace the pontoon parks PMP. All the material part of this fleet is transported on KrAZ-260Г and Ural-53236 trucks. Since the production of KrAZ vehicles remained on the territory of Ukraine, the pontoon fleet is delivered to the Russian army in vehicles Ural-53236. At present, a modernized version of the park, PP-2005 (PP-91М), is also in service with the Russian army. 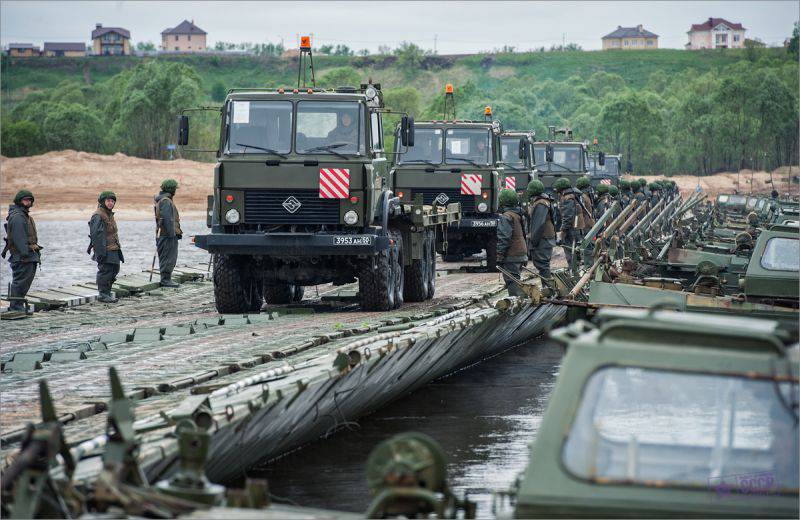 "To fulfill the tasks of maintaining and equipping crossings on water bodies of Russia, the PP-2005 pontoon fleet was planned and carried out, the existing PP-91 fleets were modernized, the PTS-4 floating transporter was accepted for supply to the Russian Armed Forces, ensuring the transport of non-floating vehicles , the weight of which does not exceed 18 tons, as well as the new ferry-landing steam PDP, whose carrying capacity is 43 tons. In addition, work is underway that is aimed at creating a promising tugboat-motorboat BMK-M, ”said Lieutenant-General Yuri Stavitsky.

When building a pontoon bridge, each of its links is “self-unloading”, simply rolling down from the “Ural” platform directly into the water, after which it “self-opens” already on the water. At this time, the crew connects the links between themselves. When rolling up a pontoon bridge, loading mechanisms are used for loading the links onto trucks, which are on car platforms. The minimum time for both pointing and collapsing a bridge over a water barrier is provided when each of the links is transported by its own car. At the same time, transportation of links in inaccessible terrain and pickup of the bridge itself can be carried out with the help of helicopters (carried on an external load). The pontoon park PP-91 allows sappers to collect both floating bridges and transport ferries of increased and normal width. 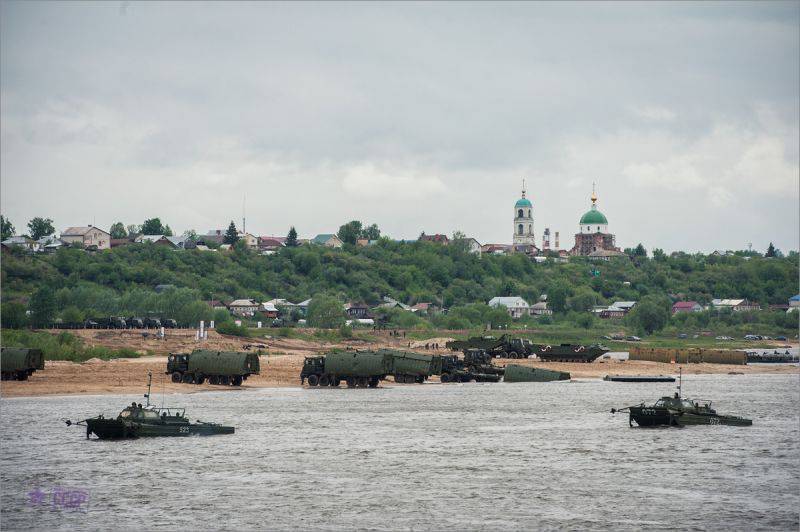 This fleet is operated by the Pont-Bridge Battalion as part of the 225 man, including officers, as well as the personnel of the support, maintenance and repair unit. The battalion consists of two pontoon companies, a repair platoon, an engineering platoon, a material support platoon, an intelligence-diving department and a liaison office. Each of the pontoon mouths of the battalion operates exactly half the set of the park. The kit of the pontoon park can be divided into two half sets. For example, as part of the engineer-sapper battalions of motorized rifle and tank divisions of the Russian army, there was one pontoon company each, which possessed a half set of PP-91.

Using the PP-91 pontoon kit, the following ferries could be assembled:

- 8 ferries with a carrying capacity of 90 tons, assembly time 15 minutes. Ferry speed is up to 14 km / h, permissible agitation up to 3 points, flow speed up to 3 m / s (speed and usability characteristics are similar for all ferries). Calculation of personnel for one ferry - 18 people (8 pontooners, 6 drivers, 4 minder). 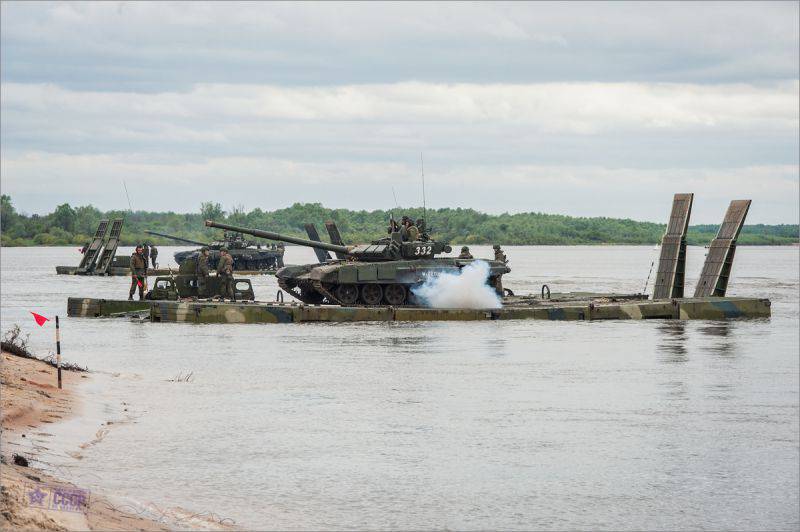 With the help of one set of PP-91 pontoon fleet, you can build floating bridges with a lifting capacity of 60, 90 and 120 tons:

Floating bridge with a load capacity of 60 tons. The bridge length is up to 268 meters, it is pointed out in 30 minutes with the width of the 6,55 bridge carriageway meter. Permissible excitement is up to 2 points, flow velocity is up to 3 m / s (permissible characteristics are similar for all three bridges).

With such a width of the carriageway of the bridge Tanks can move along it at a speed of up to 30 km / h, wheeled vehicles without speed limits. For wheeled vehicles, this bridge is double-track, that is, the organization of movement simultaneously in two directions is allowed. The length of the bridge of 268 meters is not only extremely possible, but also total, that is, you can build several bridges at once (at least two, since there are four coastal links in the park). In addition, you can build a bridge of two sets of the park with a length of 572 meters. It can be longer, but it seems impractical, since it becomes difficult to keep the bridge strip in a fairly straight state, there is a lot of tension in the connecting nodes, which may ultimately lead to the bridge breaking.

The floating bridge with a carrying capacity of 90 tons has a length of 165 tons and is guided in 60 minutes, the width of the roadway of the bridge is 10 meters. This is a bridge of one and a half width. This bridge allows you to organize the movement of tanks in one direction and road transport in the opposite direction at the same time or transfer through the water barrier mobile launchers of strategic nuclear missiles Topol-M and similar ones.

The floating bridge with a carrying capacity of 120 tons has a length of 141 meter and is pointed out in 48 minutes, the width of the roadway is 13,8 meters. This is a double-width bridge. This bridge allows you to organize the movement of tanks in two columns in the same direction or in the opposite. In fact, there are no army cargoes that could not be transferred across this bridge. 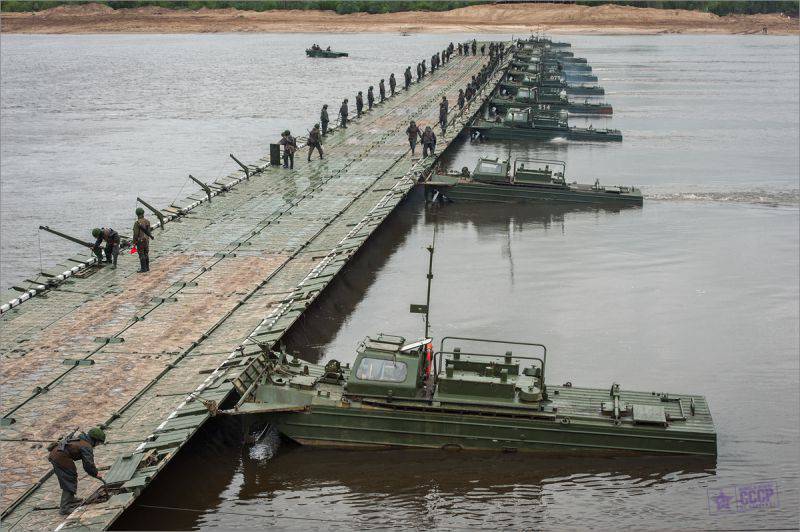 The composition of the pontoon park PP-91

The river link is a 4 pontoon interconnected by means of hinges, two of which (medium) have the shape of a parallelepiped, and at the other two links (side) one of the edges is rounded. The pontoons are made of steel, while their upper deck is a hardened steel plate, which is able to withstand the movement of heavy tracked vehicles. One side pontoon is a composite of two parts. One of these parts can be retracted inside the second, so that the entire deck of the link becomes almost flat. This was done in order to be able to assemble bridges of the required double or one and a half width. One of the side pontoons has a fairing shield.

The motor link is a metal box having dimensions (except for length) and a profile similar to the profile of a river link and the same connecting devices. All this allows you to embed such a link in the tape of the bridge along with ordinary river links. In this case, the link box is divided into 5 sealed compartments. In the aft section of the link is a removable wheelhouse, there is a control panel in it, and under it in the compartment is a diesel engine 3Д20, which develops the power of the 235 hp. The engine is cooled by seawater through a heat exchanger. 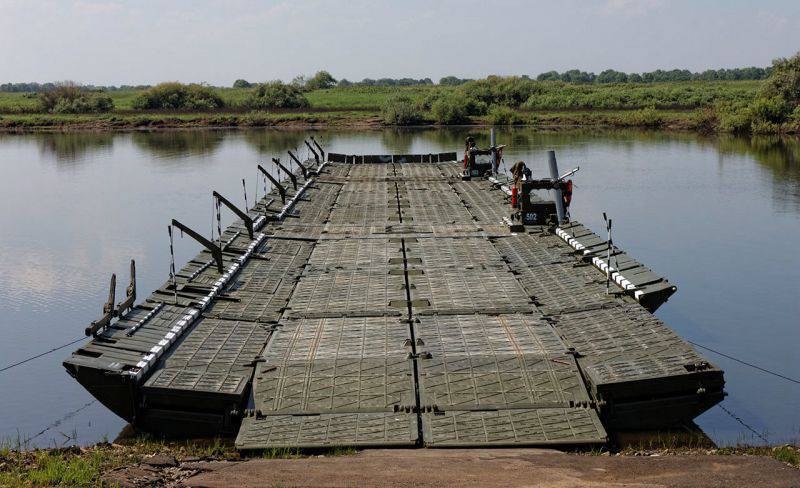 The diesel engine is connected by means of a mechanical transmission with an inboard propulsion device fixed on the box, which is a tilt-and-turn column with a propeller in the POK-225 nozzle; the thrust of this propulsion unit at mooring lines is 2340 kgf. Changing the thrust vector is done by turning the lower head of the column with a screw, it is possible to rotate 360 degrees horizontally in any direction. The weight of the motor link is 7 tons, length - 2,95 meters. The maximum speed of the movement on the water is 15,7 km / h (the speed is given for a free link).

In the compartment, which is adjacent to the engine, is the fuel tank, whose capacity is 1000 liters. This amount of fuel is sufficient to ensure uninterrupted operation of the engine for 12-14 hours. In the next for the fuel compartment there is a drainage pump, which is responsible for pumping water from the compartments of both the engine link and with the help of flexible hoses from several river links closest to it.

Motor links are included in the bridge tape directly in the assembly period in an amount that is determined depending on the speed of the current and the length of the bridge being driven. Motor links serve to move the tape of the induced bridge, turn the tape to the bridge target and back, hold the bridge in alignment, replace broken or damaged links, and withdraw a part of the links from the bridge tape to let ships through. In addition, the motor links can be used as towing equipment for ferries.

The tugboat motor BMK-225 of semi-tamaran type acts as a backup means for keeping the tape in the bridge section and towing the ferries in cases when the motor links are not enough or some of these links have failed. It is also suitable for the organization of upstream and downstream river outposts (the fight against saboteurs, floating mines, foreign objects floating downstream, which pose a danger to the floating bridge, reconnaissance of water obstacles, and the organization of rescue service). 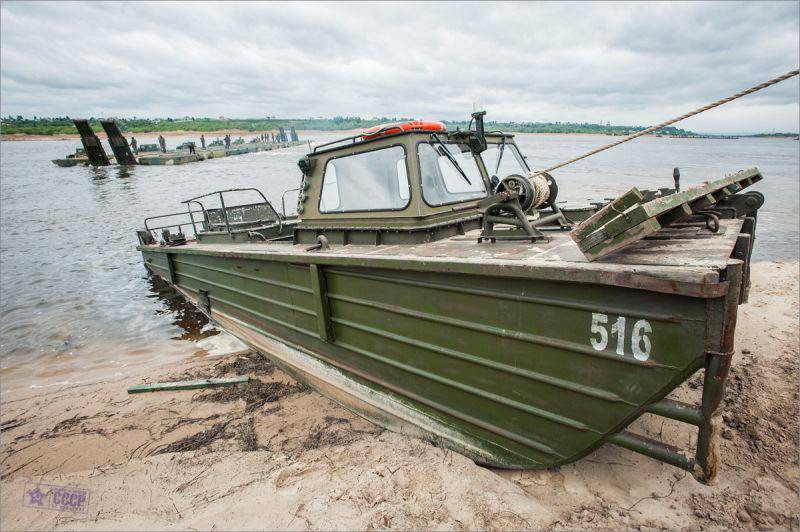 The hull of the BMK-225 consists of 3's sealed compartments. The SMD-601 diesel engine is located in the middle compartment. It develops horsepower 225. The water propeller is represented on the boat by two screws with nozzles in full-turn columns, which can be easily turned horizontally by 360 degrees in both directions, and this can be done independently of each other. Thanks to this solution, it was possible to ensure the absolute maneuverability of the boat on the water surface. The boat can turn on the spot almost around its own axis, quickly carry out the reverse and sharply slow down. Thrust on mooring reaches 2500 kgf. The maximum speed of the boat on the water can reach 20 km / h. In the engine compartment there was also a sufficiently powerful bilge pump, with which you can pump out water from the holds of the boat and from the river links that make up the floating bridge.

The liner is a special metal plate, which are interconnected by rings and generally form a flexible metal strip with a length of 11,7 meter and a width of 3 meter. This tape is laid on a special car Ural-53236, which provides a mechanized layout of the tape on the ground and its reverse lift. The pavement is necessary in order to give the conveyed equipment to get to the ferry or bridge over the swampy ground. According to the instructions, such a tape must withstand up to 1000 tank passes through it. However, in practice, it could be scrapped and scrapped after a company of tanks passed through it. Therefore, the use of linings in peacetime was prohibited by order.