4 September 2015
103
On the Victory Parade in Beijing will be written dozens, if not hundreds of articles. The authors will talk about the Russian-Chinese relations, about problems in the economic sphere, about some cooling of the PRC to some joint projects. People really are actively interested in this issue. 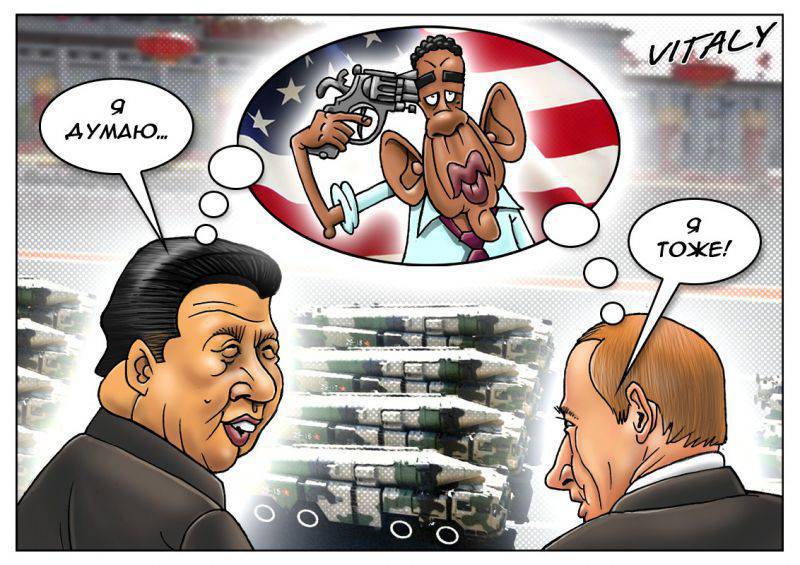 We watched the parade. Live. Because it was really interesting. And got a hefty portion of impressions. Even the lack of translation did not stop.

The first thing that caught my eye was the meeting of the leaders before the parade. The number of officials who came to congratulate the PRC is huge, 49 countries. And, according to tradition, the Chinese leader should personally meet and greet all of the guests. So the ceremony, frankly, tedious.

However, from the very first minutes it became clear who is who for modern China. Vladimir Putin arrived last and was greeted in the most cordial way. It was evident that there are more than just state leaders. There are friends, or at least good and good acquaintances. The same attitude was demonstrated by the leaders of Belarus, Kazakhstan and some other countries.

Why are we so closely followed precisely the beginning, the meeting. Nothing is done in diplomacy just like that. Any step of the policy of this level is verified to the millimeter. Any word thought out. There can be no impromptu. Especially for the eastern, Chinese mentality. The conclusion that can be made before the start of the parade, relations between China and the Russian Federation are important for both countries. And perhaps in the near future we may see some kind of “revolutionary” breakthroughs in this relationship.

At the same time, the position of the United States, Japan and Europe is not clear. Ignoring such an event or participating by delegations of minor persons means that they either refuse to cooperate or admit defeat. Although such behavior on the part of Japan is somewhat justified. Historically. Merkel didn’t come to Russia on 9 May either.

I do not want to make far-reaching conclusions, but it seems that the world is more and more splitting. There is no longer any unipolarity. There is a block led by the USA and the block of China. I really wanted to write to Russia, but objectively, the leader is still China. We really hope so far.

Moreover, it becomes clear that everything that has recently "shaken" the global economy. We mean the Chinese stock market crisis. The collapse of the Chinese stock exchange has caused a collapse in all the exchanges of the world. But somehow, not according to the laws of the market economy, this “collapse” occurred. And ended "lawlessly." Clearly on the 1,9% drop.

Economists are puzzled over what caused the crisis and what caused the fall to stop. The conclusion, from the point of view of amateurs, is simple. China has shown to the financial "tycoons" of the world that it has leverage on the global financial system and will not allow games that are disadvantageous to China.

Many analysts argued about what the Chinese would show at the parade. The intrigue remained until the last moment. Some experts said that the secrecy of the Chinese would not allow them to show new weapon. Others talked about wanting to show the power of the country. Desire to show what a huge breakthrough the country has made in the years since the Second World War.

The parade showed not just the strength of the Chinese army. The parade showed what the old joke about "aviation will not - the pilot fell ill, "is no longer relevant. The Chinese did not just copy weapons and equipment. They very correctly used new knowledge to create their weapons. And the interest expressed by leaders of other states in the arming of the PRC army indicates the emergence of a new potential arms exporter able to oust competitors from this market.

In addition, the parade showed the leaders of the competing countries, especially those who consider themselves the world "hegemones", that the Chinese will not allow pressure force and "saber-rattling" is fraught. There is something to answer.

Thus, we got an interesting situation in the global confrontation. NATO as a military organization is practically neutralized by the Russian army. And the American army, as in the last war, is blocked in the Pacific region. Only now, not by Japan, but by China. The military component is more or less aligned. What is to some extent a guarantee of security. The “hot heads” of the Western and American generals “cool down” perfectly on the sight of a powerful opponent’s fist.

These are the conclusions that come to mind after the Victory Parade in Beijing. Maybe strange, but ... Global changes are coming, and the rate of change is increasing every day. What they will lead to is not yet clear. I would not like to hold associations with the past. The hope remains that the world today still remembers the outcome of world wars.

And the quality of the parade is not inferior to ours. Beautiful, bright, numerous.

Ctrl Enter
Noticed oshЫbku Highlight text and press. Ctrl + Enter
We are
Results of the week. "Well, do not change me because of every idiot!"Azerbaijan hosted a military parade
103 comments
Information
Dear reader, to leave comments on the publication, you must to register.