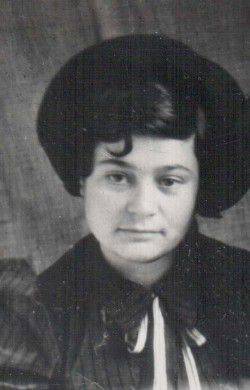 Only three people — the leaders of the intelligence service of the Crimean partisans, Ivan Fedoseyevich Fedchenko (“Sibirsky”), Edward Yanovich Sizas (the legendary “Adolf Wechkel”) and Ivan Khristoforovich Davydkin (head of the intelligence department of the Central headquarters of the partisan movement in Crimea) knew that their reconnaissance officer served in the Chef service for special assignments) at the punitive.
She was led into the forest by the Sibirsky partisans, then the leader of a battle group in Karasubazar (Belogorsk). A gray padded jacket, gray trousers tucked into tarpaulin boots, a leather cap with earflaps could not hide her charm and femininity.


"Goddess! Big open forehead, brown eyes, radiating kindness and tenderness ... - recalled the head of the intelligence department I. Davydkin in his and unfinished book because of the death. - Because the partisans called it "Venus".

Arriving independently in the squad, she said that she was born in a German village, not far from Kerch. Her father laboring with the Germans in the Civil War, was in partisans, and at the beginning of the Patriotic War he died in the defense of Odessa. The fascists offered her to become a translator, having learned that she knows German well, but she wants to be a partisan and avenge her father.

The partisans accepted her at once, but they were convinced that the work of which she was of great state importance could be entrusted to her if she agreed to become a translator for the Germans. So Sophia began to work in the field gendarmerie 11-th German army.

When SS Sturmbannführer von Matov berated his subordinates for the catastrophic leak of secret information, he and had no idea that my dear Sophia translator - is the cause. She was beyond suspicion.
She was even sent to Berlin, and in the Imperial Security Directorate General, she was offered service in occupied France. But von Matov persuaded her to stay with him.

With the help of Sophia Zagorkova, almost all provocateurs wandering around the villages and towns of the Crimea were exposed, and under the guise of partisans, they asked to spend the night at the owners, and in the morning they were handed over, and the SD thugs shot them.

Messages "Venus" partisans were always accurate and operational. The chief of the intelligence department, Davydkin, told how in January-February 1942, the Nazis hurriedly deployed forces from Simferopol and Dzhonkoy towards Kerch, including the Adolf Hitler and Viking SS motorized divisions to fight the Red Army airborne units. “Venus” informed the partisan leadership about this, and it immediately radioed this important information to the mainland. There is a threat over the underground of Karasubazar. The gendarmes were ready to capture the underground, but Venus warned them in time, and twenty members of the underground managed to escape to the partisans in the forest.

Of interest is the document compiled by SS Stefanus, Sturmbanfuhrer SS in the spring of 1942.

A secret document of national importance!

I understand that the elimination of banditry in the mountains and some localities of the Crimea is carried out in accordance with the directive of the Reichsführer SS expeditiously, systematically, using ground and air means, but, as at first, the bandits also resist, full of fanaticism, despair and skill. They know the terrain perfectly and tactically correctly use it in battles with us. Even with good conductors from the local community, the Tartars, they suddenly can not find and attack.

When combing the forest we incur heavy losses, especially people from special units of the SS, who, as a rule, come into contact with the bandits first. The local Tatars who came to us from the bandits show that the gangster detachments are mostly headed by well-trained border guard officers and NKVD employees.

Therefore, I consider it necessary to report a second time that the search and prosecution of the bandits through the use of service dogs did not give positive results. During the 15 days of March, service dogs and their guide 82 were lost in battles with 73 bandits.

As it turned out, the officers of the Border Guard and the NKVD employees are well versed in the methods and skills of killing the service dogs.

I can not report to you and that severely wounded gunman was captured yesterday. We had to tinker a lot with him to find out something. Dying, he managed to tell us an alarming thing for our rear. It turns out that the gangsters in each detachment created sabotage and reconnaissance groups, and are led by border guard officers or NKVD officers. These groups are trained to deal with us with sophisticated methods.

South-east of the city Karasubazar, near the village ... Chermalyk was eliminated our headquarters bandits led by Colonel Mokrousova, but we were not able to keep the blockade and destroy them from seizure Mokrousova. They had more than three thousand well-armed gangsters, instead of 500, which we assume to be our information. For unknown reasons, this information was allegedly imposed by a group of SS Hauptsturmführer Peller (I am conducting the investigation myself).

Because of these dolts we lost about 900 killed and wounded.

The commander is outraged by this.

The agents we sent to detachments of gangsters do not reach the desired goal, as a rule, they are detected and destroyed (I mean the false partisan groups from our schools).

The disbanded and dispersed detachments of the Sudak gangster formation of Stasyuk, captured by my guys, were re-created by the Bolsheviks from the airborne units. Our three agents were captured and shot by bandits ...

And again, all this information was related to the activities of the Venus scout, with her accurate reports to the intelligence leadership.

But there was this dangerous, secretive work behind enemy lines and the other side. People unfairly accused her in connection with the enemy.
Countrymen were always seeing Sophia Zagorkov as always smiling, not preoccupied with anything, they could not even think what lies behind this smile, what inhuman efforts not to make a single mistake, either in glance, in word, or in gesture. And this distrust of her still comes around in the future ...

One day in April 1942 year Sophia translated into German in the office of SS Sturmbannführer von Matov testimony traitor who fled Karasubazarskogo guerrilla group. The traitor issued the chief of staff of Likhomanov, Pavel Vladimirovich, presenting his stolen tablet and assuring that Likhomanov had great connections with the city’s underground. The fascists seized Likhomanov, his spouse and children. Sofia warned the guerrillas, but they could not help: in connection with the failure of Soviet troops on the Kerch Peninsula Kerch fall against the guerrillas while significant forces occupants were thrown.

Matov has exhausted all means to break the will of the Likhomanovs arrested. Promised to give the family cow, give large sums of money trying to appease candy children. But they were silent. Then the fascist turned to torture in the basement. Likhomanov was tied up with a telephone wire and burned his toes with fire. Hellish pain permeated the whole body, but he did not even cry out. And when Matov ordered to use a needle and pliers, weeping wife Ustinja N. fainted ... Fourteen hours of continued torture and from Lihomanova not managed to get a word.

The next morning, Likhomanov was interrogated by the head of the Crimean chief, the chief of the Einsatzgruppen "D" group, SS Obersturmbanführer SS Paul Zapp. He was accompanied by two interpreters - Sophie and Otto, though he spoke a little in Russian. During the interrogation, Zapp showed several photos of partisans, among whom was Likhomanov’s son Pavel. “Which of them do you know?” He asked Vladimir Pavlovich. “No one,” he replied.

... In January 1942, Dr. Adolf Weckel, a close relative of the brigadeführer Walter Schelenberg, arrived in Crimea to inspect the camps of Soviet prisoners of war and select candidates for espionage and sabotage schools. Due to air raid and Soviet raid aviation he became the prey of the Crimean partisans. And they, after long interrogations, decided to use his persona. Under his name, the inspections were continued by the Soviet intelligence officer, who knew German well, the Chekist Eduard Yanovich Sizas, Ivan Khristoforovich Davydkin's deputy for this intelligence.

Under the name of Dr. Adolph Vekkel, the underground fighter Sizas first went to Feodosia and appeared there before the commander of the Ak-Monai sector of the front, the commandant of the city. He behaved as befitted lead the next of kin of Schellenberg and messenger Himmler blew the punitive part of diabetes in Feodosia for failing to organize the fight against the guerrillas and promised to personally lead an expedition to combat them. He inspected a prisoner of war camp in Dzhankoy, setting the heat of a drunken camp commander. Because of such activity in Simferopol, the head of the department for combating "bandits" (partisans), SS Stefanführer Dr. Stefanus, met him with great respect.

And in the future, Stefanus increasingly trusted Dr. Vekkel with various secrets, so the intelligence officer, who had infiltrated the enemy’s lair, managed to photograph particularly secret documents.

One of them, written in his own hand by General Manstein, testified that it was intended to carry out a massive resettlement of all the inhabitants of the Crimea beyond its borders and settle it with Germans - residents of Tyrol.

Later, Sophia learned that at the end of 1942 - the beginning of 1943, E.Ya. Sizas was authorized by the NKVD group at the Northern Connection of the Crimean partisans. He and his subordinates in the area of ​​Feodosia established contact with the camp of Soviet prisoners of war and brought out from there the 37 people from whom they had formed a partisan detachment. Sizas had its agents in Feodosia, in the Kirovsky, Starokrymsky districts. Through the agency of extracted valuable information about the enemy, which were transferred to the Soviet command. In November, 1943 was evacuated to the mainland due to Sizas disease. Due to the fact that he was an Estonian by nationality, he was sent to operational work in the Estonian SSR, where he was soon killed by nationalists. She suffered this message from Ivan Khristoforovich Davydkin. After all, it was Sisas who once called her “Venus” ...

And there was unbearably hard day, when Sophia was simply stunned and crushed.
She was sitting in the office of Assistant Chief of the Franz Field Committee, lowed to the table. Everything floated before her. She barely restrained from not bursting into tears. She could not believe that the dead man lying next to a stretcher, all bloody, with bruises on her face, with a broken head, was dear Ivan Fedoseyevich Fedchenko, “Siberian”, who treated her so much and often helped her with advice. "Siberian", which made her a scout in the den of the fascists SD.

"It's a pain breathing with them!" - somehow confessed to him "Venus". “Rather, it would all end.”

The war ended with a great salute of victory over Nazi Germany. But this holiday, Sophia Petrovna, met a very sick one already - years of incredible exertion of mental and physical strength affected. "Venus" died in the 1946 year. "But in the flame of our banners and lit her heart," - wrote in his memoirs, former head of the intelligence department of the Central Staff of the partisan movement in Crimea, retired colonel Bagramyan Davydkin.

But there was a more sorrowful page in her life than the war. In its injustice, the rest of the pain is superior to her. Its famous name stores Memorial "The victims of political terror in the USSR":

And this she had to go through ...

We are in Yandex Zen
I am a quilted jacket!
What you didn't want to know about England
11 comments
Information
Dear reader, to leave comments on the publication, you must to register.