Creators of Victory. One of the three 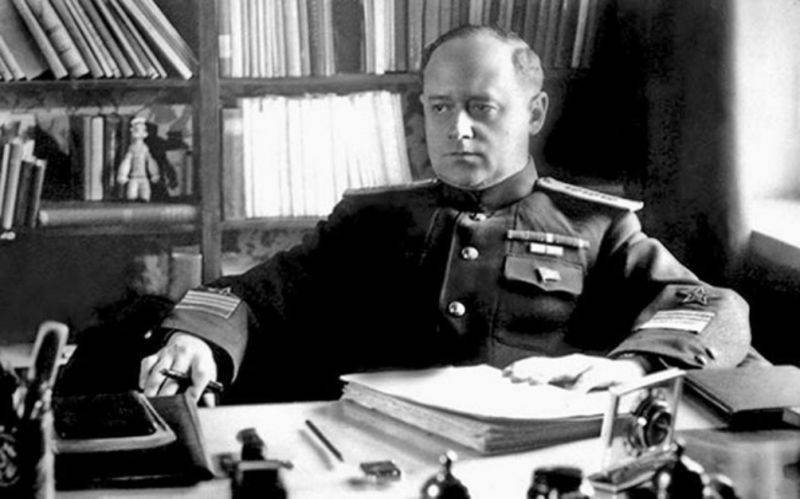 If in the Soviet Union there were more than four dozen Marshals of the Soviet Union, some are still alive today, then the Admirals Fleet The Soviet Union has only three. Two of them are well remembered today - this is N.G. Kuznetsov and S.G. Gorshkov. The name of the third Ivan Stepanovich Isakov rarely sounds. Why? Obviously, because few people know about his activities for the benefit of the Navy, and he himself did not like to advertise himself, unless he dreamed that after his death the warship would be named Isakov. He had no children, and there was no one to continue the marine traditions or to recall his merits. And his whole life in 73 years can not be called easy. He achieved a high rank in the Navy only thanks to his work and will. Here is how he himself assessed his fate shortly before his death: “My fortune, which I dreamed of from an early age, made me a sailor and quickly moved up the ranks. However, it seemed that she was racing faster than necessary, and, obviously, sideways, because for each throw forward ... I had to pay too expensive. ”

Who would have thought that the boy who was born in 1894 in the mountain village of Adjikent is somewhere outside Kars (now Turkey) in a mixed family: the father is Armenian Stepan Yegorov Isaakian (hence the surname Russified with emphasis on the last syllable Isakov), mother born in Estland, Ida Antonovna Lauer, will become Admiral of the Fleet of the Soviet Union, which he will receive simultaneously on March 3 1955 of the year with the famous naval commander NG Kuznetsov. But before that, there were 45 years of hard work to achieve his dream of becoming a seaman, experiences and hesitations, striving for perfection, but his love for his country of Russia was always at the forefront. It is to the life of I. Isakov that the belief can be applied, then our path is determined by God, and the rest is all up to us. So 10-year-old boy Ivan Isakov, a native of the mountains, accidentally saw in the magazine "Illustrasion" a picture of the death of the battleship "Petropavlovsk" all his life fell ill with the sea, and his idol was S.O. Makarov. “It was some kind of insight from above,” he later recalled.

And then, as if everything, including relatives, did not affect Ivan Stepanovich, that the fleet was not for Caucasians, Vano did not change his dream. Naive in politics, he hoped that he would still be able to prove to admirals in St. Petersburg that he had the right to serve the country’s fleet and become his officer. And he filed, without saying anything to any of his relatives, a petition for admission to the examinations in the Marine Corps. But, of course, he was refused in writing - “The request to refuse!”. Probably, then the royal command of the Corps thought: “Why would this young man from Armenia go to the naval service? Well, even in the land forces - is another matter. But the fleet? .. There were no admirals from Armenia! ” Fortunately, they were wrong - there were officers - Armenians in the navy of Czarist Russia, and in the Soviet fleet there were many admirals - Armenians whom the author met personally. And Isakov Ivan Stepanovich (1894-1967) became one of the three highest naval ranks of Russia.

The First World War began, and the lack of officer cadres forced the tsarist government, having forgotten the estate principles, to train junior officers, warrant officers and midshipmen from raznochintsy. Separate midshipmen classes were opened in St. Petersburg. In the summer of 1914, after leaving the Polytechnic Institute, where he studied for a year, Ivan Isakov passed competitive examinations and became a black midshipman in 20 years. Black because midshipmen of separate classes, in contrast to midshipmen of the Marine Corps with white velvet shoulder straps, wore black cloth shoulder straps. But the midshipmen training program was not inferior to the corps. Isakov stubbornly went to his goal, not disdaining any work either in the Classes or in the ship’s practice, remembering that Nakhimov was also addicted to sailor labor, for which the nobles gave him the nickname “boatswain”.

His practice on ships is only the beginning of marine life. It determines the future relationship with the maritime service. Here and the joy of learning new, and grief, here and recognition of different natures. Nothing reveals the nature of man as a long life together on a ship at sea. In the sea - as in war: a good man will quickly show and develop the best traits of his character, and a bad one will surely reveal himself to his comrades. One can immediately see who is brave and in everyday life is not timid, and who is indifferent to everything except himself. Well done over the defenseless to swagger, although from itself is zero.
But before the elders bends saint.

Having experienced everything, Isakov was not disappointed in the maritime service and only began to push for his dream, the commander’s bridge, more insistently. The main thing that he understood: "He himself elevates or devalues ​​a man."

Why do I dwell in such detail on the midshipman years of the life of Ivan Stepanovich Isakov? It seems to me, and experience suggests that admirals originate in schools. I remember my cadet years, when we all dreamed of being promoted only up to the commander of the ship, but many already dreamed of more ... So did Isakov think about more? So far, only about the command bridge, but!

Marshal G.K. Zhukov said that each army commander must go through the command of the regiment. For the fleet, it sounds like this - every admiral must pass through command of the ship. In other words, for a sailor’s career, the ship’s bridge should be the springboard.

Having passed all the stages of the naval service in the revolutionary and post-revolutionary turbulent times, participating in the first world and civil wars, Isakov became a member of the party only in 1939, being already a flagship, there was such a rank in the Red Fleet, corresponding to the admiral rank. It says a lot.

Most of the ship service he had to pass in the post of foreman, a very responsible position in the fleet - on it keeps the whole ship service. Isakov took from this position a brilliant maritime training and culture, distinguishing a person who was brought up in strict daily and night routine. According to the unwritten laws of the joint life of the crew of the ship, without which no team can exist - the team. Probably, the practice of the first mate developed his organizational skills, which were fully manifested later in the headquarters and in command posts. And one more important quality was given to him by that position - endurance at any physical and moral tests. After all, he had to 1942 year, when he had a leg amputated, and to the end of life in 1976 year to lead an active life, as they would say today, to be in leadership positions. In 1951, he receives the State Prize, in 1958, he becomes a corresponding member of the USSR Academy of Sciences, in 1963, he is accepted into the Union of Writers of the USSR .... Apparently it was not for nothing that he told the surgeon, who told him that he needed to amputate his leg, that “save my head”. Yes, the head of Ivan Stepanovich was the most valuable tool in the entire complex and hectic life of the Admiral, it was she who helped Ivan Stepanovich Isakov to attain the highest rank in the USSR Navy - Admiral of the Fleet of the Soviet Union.

It should be noted yet such a positive feature of Admiral Isakov, as participation in the fate of people. It was he who was one of the first to rush to the aid of Alexander Marinesko (commander of the legendary submarine C-13, “attack of the century” - VK), helped Alexander Kron to publish his novel “The Captain of the Long Voyage”. He handed out to people he liked books, relics, plots, his ideas and ideas, not caring at all about authorship and priority, more concerned with the continuation of what was started or found — he understood the limited life span. “My advice,” he wrote, “if you’ve conceived it, do it now. The drop in tension and revolutions sneaks up so imperceptibly that it is postponed with a light heart for tomorrow. And tomorrow may not be. " Very wise advice for the current leaders of the country, who promise to do everything by 20-30 years, but they themselves do nothing today. Do we live to see those days? ..

For all his multifaceted activities, Ivan Stepanovich considered the affairs of the fleet the most important task of his whole life. Back in the mid-fifties of the last century, lying on a hospital bed, he wrote: “It is necessary to educate ocean thinking”. And in 1962, he already outlined a plan of work, which he did not have time to implement: "Ocean thinking is one of the most important, contemporary problems for the entire Soviet people." Being always engaged in science (by the way, SCIENCE is not respected today - V.K.) Isakov saw how many people the ocean will require for its development and how important it is for everyone to understand what we need there, how important it is to overcome continental psychology, “coastal” psychology ". Each line of his notes, these and subsequent, although fragmentary, deepens the plan, expands it historical and modern justification and conveys a sense of the ways of our ocean future ....

Unfortunately, today, without overcoming the “coastal” thinking, Russia's oceanic future is so messed up that we can only dream of a strong Navy and a large civilian navy. After all, the words Fleet can not be built. It is an expensive state instrument, but it is necessary for a great power. Isakov Ivan Stepanovich, a Soviet naval commander, Admiral of the Fleet of the Soviet Union, Hero of the Soviet Union, a military man and a scientist, lived and worked for this.

Recalling I.S. Isakov, I specifically briefly stopped at his psychological portrait, without listing the positions he held. After all, the truth is that not a post paints a person, but a person a post. This fully applies to Ivan Stepanovich. I just want to note that his main naval position was the Chief of the Main Naval Staff during the Great Patriotic War. But he did not sit in the office. As Commissar of the Navy N.G. Kuznetsov he was in constant traveling on the fronts, coordinating the actions of the Navy with the land forces: at the beginning of the war the Leningrad front, from the end of 1941 - the southern fronts, where, having received a mortal wound, survived, continued service and work for the good of the Fatherland and Navy.

In a newspaper article about a big man it is impossible to tell everything. I set as my task only to remind of an outstanding personality, which should remain in people's memory.

We are in Yandex Zen
Sons of ivan
My grandfather's front-line letters (part 2)
11 comments
Information
Dear reader, to leave comments on the publication, you must to register.