Russia on the international torpedo market

7 September 2015
30
Russia occupies one of the first places in the world in the export of arms and military equipment. An important part of defense exports is the construction of ships and submarines for the naval forces of third countries. In addition, customers of Russian ships and submarines acquire the appropriate weapons: missiles, torpedoes, etc. To date, the market for naval armaments, including torpedoes, is quite a difficult situation. The market is already divided by the main players, but some new manufacturers are trying to discourage their share from them. At the same time, Russian enterprises remain at the leading positions.


After the collapse of the Soviet Union, the domestic torpedo industry found itself in a very difficult position. Both ready-made torpedoes and some of their units were produced by factories remaining in the new independent states. For example, the factory "Fizpribory" (now TNK "Dastan") remained in Kyrgyzstan, and the Machine-Building Plant. Kirov came under the jurisdiction of Kazakhstan. All this could lead to the disruption of waste production links with negative consequences for the development and production of weapons. Nevertheless, the defense enterprises of Russia and the CIS countries were forced to put up with the collapse of the common country and get used to the new situation.

Caught in a difficult situation, defense industry enterprises did not cease their activities. Some organizations have focused on creating new projects, resulting in the emergence of a number of promising developments that might be of interest to both domestic and foreign customers. In the nineties and two thousand years, a large number of new torpedoes were developed, including those that were deeply modernizing existing weapons, some of which had reached mass production. 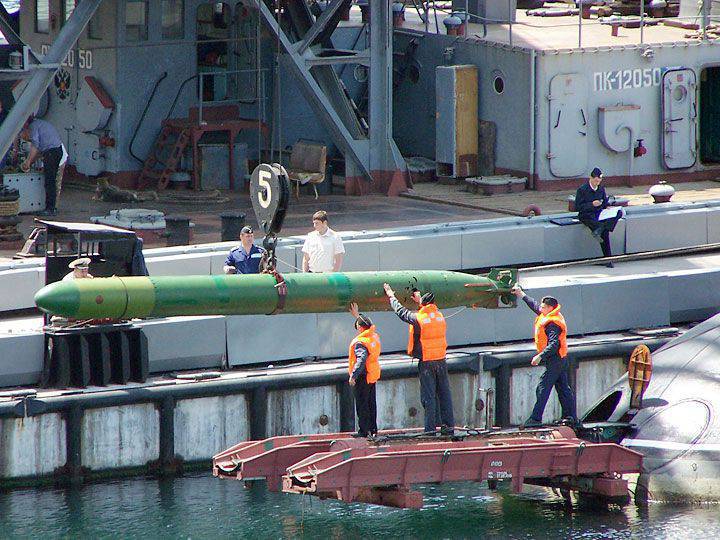 For example, the St. Petersburg Central Research Institute "Gidropribor" continued to work on previously frozen projects, resulting in the emergence of five new torpedoes. Products TT-1, TE-2, TT-3, TT-4 and TT-5 with thermal (TT) and electric (TE) power plants differed caliber and other dimensions, the weight of the warhead, etc. So, the torpedo TT-4 was small and had a caliber of 324 mm, and the largest product of the family was 650-mm TT-5. However, not all new projects were developed. For example, the compact TT-4 since the end of the last decade is not mentioned in official sources. Instead, the corresponding niche is occupied by the UMGT-ME product.

The Dvigatel plant (St. Petersburg), which now became a division of the Hydropribor in the nineties, independently upgraded the serial torpedoes TEST-71М and SET-65. Due to the use of some new components, it was possible to a certain extent to improve the characteristics of this weapons.

GNPP "Region", now part of the Concern "Tactical Missile Weapons", continued the development of several types of aircraft torpedoes. Thus, on the basis of the APR-2E product, an APR-2МЭ torpedo appeared, capable of operating at shallow depths. Products APR-3E and APR-3МЭ due to some innovations received higher performance in comparison with the "twos".

In 2001, the managers of the companies Region, Dagdizel and Morteplotekhnik Scientific Research Institute decided to launch the joint research work Malyshka. As part of this initiative project, it was planned to develop a new small-sized torpedo, which received an MTT index. In the future, a preliminary draft of the project was developed, which was approved and became the occasion for the start of several new R & D projects. The inclusion of the MTT torpedo in the list of weapons allowed for export was a peculiar point. This event happened at the very beginning of September 2003.

It should be noted that almost all the mentioned projects were a modernization of existing ones. This was due to the peculiarities of the current situation, as well as the specifics of the market. In addition, some existing projects became the basis for several new ones. So, the already mentioned torpedo TE-2 was an export modification of the product USET-80. In addition, it is known that, on the basis of TE-2, the UETT torpedo was later created, which differed from it by certain features of the onboard equipment.

The current decade can be considered positive for the international torpedo weapon market. There has been a gradual increase in the total supply of torpedoes produced in different countries. In addition, new developments in this area regularly appear at international exhibitions. At the same time, Russian enterprises, despite some problems of the past decades, have a good position in the market, confidently leading in terms of the number of weapons supplied.

According to reports, from 2010 to 2014 years, the Russian defense industry manufactured and transferred several types of torpedoes to customers. The second place in terms of supply is occupied by the Italian company WASS, which supplied 250 torpedoes. The volume of production of export torpedoes in the USA did not exceed 60 units. Three dozen torpedoes set by German enterprises.

The order book of Russian enterprises also looks solid. As of the beginning of this year, Russia should have delivered 70 torpedoes to customers. The US portfolio, in turn, has two orders totaling just under a hundred torpedoes. In this case, however, we should expect the delivery of only 48 torpedoes to Turkey. Taiwan’s order for 50 weapons has not been fulfilled for a long time due to the difficult situation in the Asia-Pacific region.

At the beginning of the period under review, an order from Algeria was a good push for Russia to become the first place among torpedo exporters. In accordance with this contract, several Russian enterprises in 2010 donated torpedoes TEST-40МЭ-НК and the same number of 71-53К products to the customer 65.

Also 80 torpedoes were sent to India. The Indian order implied the supply of four dozen torpedoes of two types: UGST and TE-2. Another major customer was Vietnam, which in a few years should receive 160 torpedoes of several types. Until the end of last year, Vietnamese the fleet 45 torpedoes of the TE-2 and 53-65K type were delivered. In addition, the existing contract provides for the supply of 50 3M-54E anti-ship missiles, a little more than half of which were manufactured by the beginning of this year.

At present, a curious situation is observed on the torpedo armament market. Most of the major exporters of torpedoes reduce production due to the lack of large contracts. At the same time, Russia and the United States are increasing production, fulfilling more and more new orders. This situation is likely to persist for the next few years, after which it will begin to change.

Alarming for manufacturers news in recent years come from southeast asia. According to the latest data, China has received several notable orders for the construction of submarines for third countries. It is possible that these submarines will be armed with torpedoes made in China. As a result, a third serious player may appear on the market. Because of this, the position of Russian manufacturers may falter or remain at the same level without noticeable hesitation. The same forecast can be made about US torpedo contracts. Finally, third countries that do not have large contracts can be almost completely extruded from the market.

However, the details of future Chinese contracts, if any, are still unknown. The market leaders are still Russia and the United States, and the further development of the situation may be the subject of serious controversy. Anyway, a solid market share is not a reason to “rest on our laurels." The development of torpedo weapons should be continued in order to maintain or improve market positions.

We are in Yandex Zen
Domestic torpedo weapons on the world market
Defense industry in the post-Soviet space. Part II
30 comments
Information
Dear reader, to leave comments on the publication, you must to register.