3 September 2015
24
As part of the 12 International Aviation and Space Salon MAKS-2015, the Russian Space Agency demonstrated the corps of the command compartment of a manned transport vehicle of a new generation. Currently this spacecraft is still under development. In the future, it will have to replace the reliable Soyuz-TMA spacecraft, which today is used to deliver astronauts to the International Space Station. It is worth noting that the elements of a promising manned transport vehicle were shown to the public for the first time.


On the opening day of the air show, which traditionally took place in Zhukovsky near Moscow at the end of August, Russian President Vladimir Putin, Governor of the Moscow Region, was able to familiarize himself with promising developments of the Energia Rocket and Space Corporation (RSC) Energia in the field of automatic space complexes, manned cosmonautics and launch vehicles. Andrei Vorobyov, General Director of Roscosmos State Corporation Igor Komarov and a number of other high-ranking guests of MAKS-2015. Vladimir Solntsev, incumbent president of RSC Energia, told them about the corporation’s successes in implementing key projects of the Federal Space Program, as well as the most promising developments at the moment in the field of domestic manned cosmonautics.

At the RSC Energia stand, a case made of composite materials and an updated design layout of a return vehicle of a manned transport vehicle of a new generation (PTK NP) were demonstrated. Specialists were able to personally get acquainted with the new elements of the interior of the spacecraft, imitation of thermal protection and a number of other changes that were supposed to demonstrate the progress of work on this project. The body of the return vehicle was shown to the public for the first time. 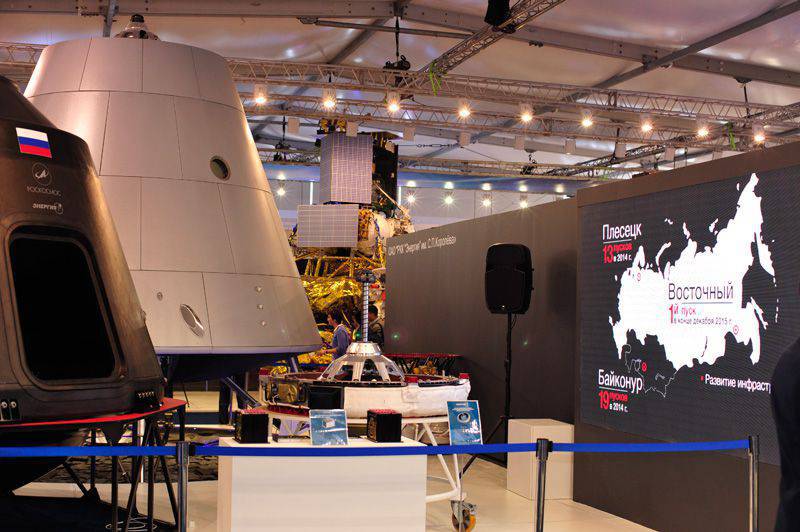 In addition, visitors to MAKS-2015 were able to get closer to large-scale models of a telecommunications satellite and an Earth remote sensing spacecraft, as well as a PTK NP docking unit, an onboard complex control unit made from domestic components and a reduced model of the International Space Station (ISS). They were also able to see the famous descent module of the Soyuz-TMA transport manned vehicle, which had returned from space.

Currently, the space rocket corporation "Energy" is conducting creative competition for the best name for the transport manned ship of a new generation, which in the future is planned to be used for flights to the moon. The competition started on August 30 and runs until November 2 2015. Competition results will be announced on 15 January 2016. The winner of the competition will be determined by the results of public voting and the work of the jury. The main prize for the lucky winner will be a trip to the Baikonur cosmodrome in the spring of 2016, with the opportunity to attend the launch of the Soyuz transport manned vehicle. The jury of the competition is chaired by Igor Komarov, who holds the position of general director of the Roscosmos state corporation.

The elements of the manned transport ship, which does not yet have an official name, demonstrated at the exhibition, should in the future be replaced by the Progress cargo ship and the manned Soyuz-TMA. In the near future, the corporation "Energy" is going to carry out tests of capsules. According to the plans of the corporation, the first test flight of a new spacecraft will take place in 2021 year. The launch of a new device using the new Russian Angara rocket is planned to be carried out from the Vostochny cosmodrome, which is currently under construction. 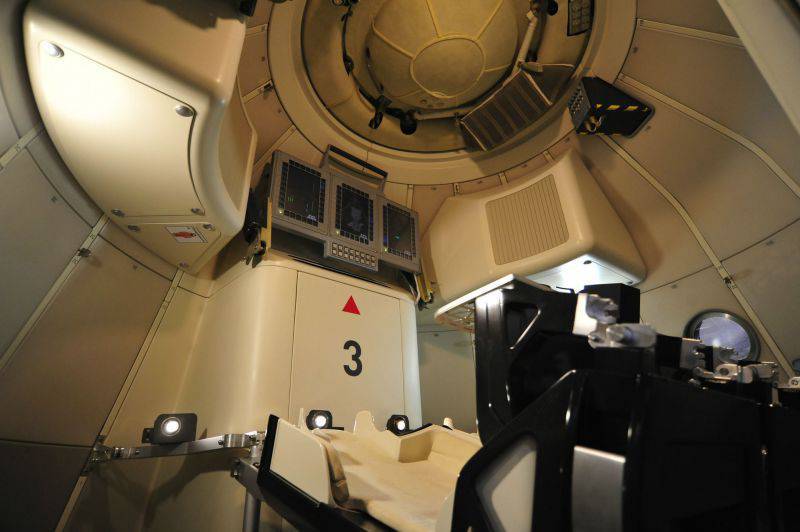 As told reporters RIA News RSC Energia president Vladimir Solntsev, the testing of the world's first carbon-fiber command building for the PTK NP is planned to begin next year. According to him, the uniqueness of the development lies in the fact that spacecraft, on 80% consisting of carbon, in the world at the present time, no one else does. At MAKS-2015, the command compartment was shown for the first time, and in 2016, RSC Energia will begin its life tests. According to Solntsev, due to the wide use of carbon-fiber constructions, the total weight of the new-generation manned transport ship being created was reduced by one ton.

“All carbon fiber used by us is Russian-made. We are preparing this ship for testing and subsequent launches using the new Angara launch vehicle, ”Vladimir Solntsev emphasized. The command building case shown at the air show is a three-layer structure. For the first time for the domestic spacecraft, the inner and outer platings were made of black carbon fiber sheet. Aluminum honeycombs are used as a filler, the frames were made of monolithic carbon fiber. Thanks to these solutions, the weight of the command compartment is only 637 kilograms.

The piloted transport ship of the new generation, which Energia Corporation is working on, is designed to deliver people and cargo to the Moon, as well as to orbital stations located in near-earth orbit. The created spacecraft is reusable, and during its development the newest technologies are used, which sometimes simply have no analogues in the world cosmonautics. In particular, the return unit PTK NP will be made of modern composite materials, a reusable docking unit is also provided. The modern on-board electronic equipment installed on the ship should provide a more effective solution to the problems of approaching and docking the manned transport ship, as well as improve the safety of its crew members during the launch and launch stages of the vehicle to Earth. 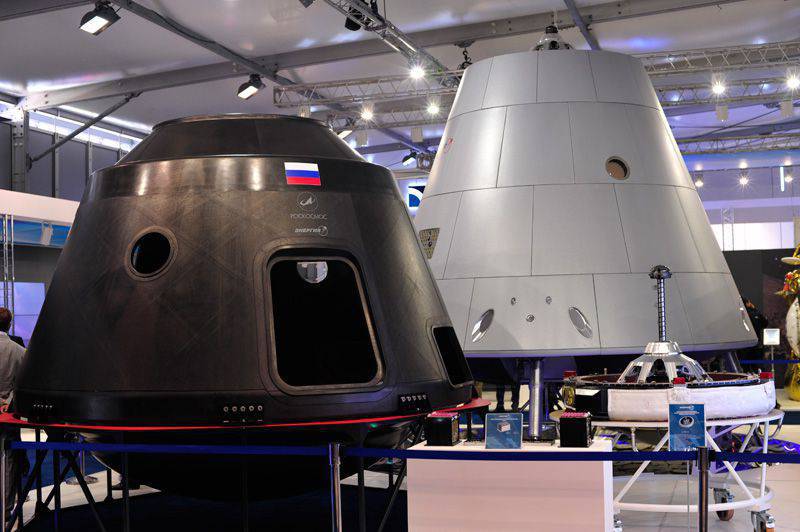 The number of crews PTK NP, according to the official site of RSC Energia, will be up to four people. In the autonomous flight mode, the transport ship can be in orbit for up to 30 days, and during the flight as part of the orbital station - up to one year. The total mass of the spacecraft during the flight to the Moon will be 19 tons, while making the flight to the orbital station - 14,4 tons, the mass of the return vehicle - 9 tons. Maximum ship length is 6,1 meters. Rated overload during descent - 3g. The newest heavy rocket “Angara A5B” will be used to launch the PTK NP into orbit.