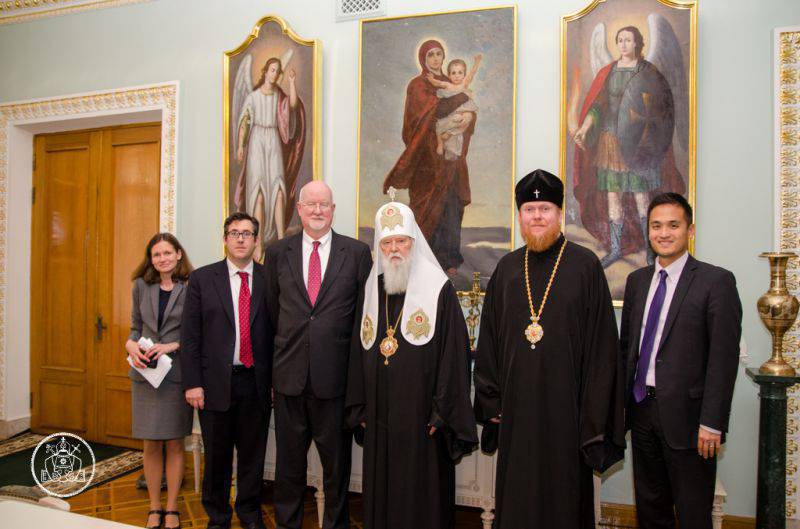 Religious issues in our time are becoming difficult to separate from political ones, so it is important for American diplomacy to keep abreast, especially in this important region.

Professor Sean Casey, a special representative of the US State Department for Religious and Global Affairs, recently visited Ukraine, reports Ukrainian portal Gromadsky Prostory, citing the Institute for Religious Freedom. In Kiev, he held a series of meetings with leaders of Christian denominations, as well as officials and experts. Casey visited the head of the Ukrainian Orthodox Church of the Kiev Patriarchate (UOC KP), Patriarch Filaret, head of the Ukrainian Autocephalous Orthodox Church (UAOC), Metropolitan Macarius, head of the Ukrainian Orthodox Church of the Moscow Patriarchate (UOC MP), Metropolitan Anthony and former leader of the Ukrainian Greek Catholic Church ) Archbishop Lubomir Husar. The American guest spoke about the activities of the Office of Religious Community Initiatives, established under the US Department of State in August 2013. Participants of the meetings discussed the interfaith situation in Ukraine, state-church relations, religious aspects of the “Russian aggression” in the east of the country, “facts of violation of the rights of believers in the occupied Ukrainian territories in the Crimea and Donbas”. Washington's representative was accompanied by Deputy Political Counselor at the US Embassy in Ukraine K. Toko, political officer B. Campbell, and Assistant J. Wystrand.

Recall that Professor Casey worked in 2008 for the campaign headquarters of Barack Obama. He is known for numerous works on the intersection of religious issues and public policy. In August, 2013 of the year, introducing the new Directorate, director of the White House Bureau for Interfaith Partnership and Cooperation, Melissa Rogers spoke about the three main tasks assigned to this division. It was supposed to promote sustainable development and more effective delivery of humanitarian assistance; promote pluralism and human rights, including the protection of religious freedom; promote global and national security. Previously, the State Department avoided working closely with religious communities. Diplomats motivated this by not wanting to violate the First Amendment to the US Constitution, and also justified by not knowing the nuances of the teachings and practices of certain denominations. The situation began to change with the arrival of Secretary of State Hillary Clinton.

As Religion & Politics portal at the University of Washington in St. Louis wrote, in 2009, the head of the State Department’s planning department, Judd Beardsall, began to organize meetings with diplomats and invited experts on the issues of interaction between diplomacy and religion. Later, on this basis, the Forum on Religions and Global Politics was created at the US Department of State. Birdsall was convinced that the involvement of religious groups was necessary. He said that "if you were a champion of a strict separation of church and state affairs, you would think that American diplomats should work exclusively with secular society, you would find huge gaps that cannot be otherwise closed, for example, interaction with the Taliban." On his initiative, questionnaires were sent to US embassies at 167 with a request to evaluate their dialogue with religious communities in the host country. It turned out that in most cases he limited himself to inviting the leaders of local religious communities to dinner. All this eventually resulted in the decision to strengthen the work with world religions.

Details about the negotiations, the special envoy of the US State Department on religious and global issues with the heads of Ukrainian churches so far. Perhaps this is because Casey’s visit was an introductory one. On the other hand, there are some nuances that attract attention. The first. During a conversation with the manager of the UOC-MP, Metropolitan Anthony, the American guest called the opportunity to address all parties to the conflict in the east of Ukraine as an advantage of the Ukrainian Orthodox Church of the Moscow Patriarchate, reports Ukrainian portal "Fraza". At the same time, from a political point of view, according to Casey, the fact that the UOC-MP is the only public institution that is evenly present in almost all of Ukraine, in particular, in the territory where military operations are conducted, puts it in a difficult position. This is true. Other Orthodox confessions, as well as Greek Catholics, periodically reproach the Ukrainian Orthodox Church of the Moscow Patriarchate with its “pacifism” and the fact that it supposedly stands on the side of the “separatists”. Although you can find examples when in the center and in the west of Ukraine in the dioceses of the UOC-MP they help those who take part in the "anti-terrorist operation" on the side of Kiev. But what exactly did Casey himself mean? The simplest explanation that immediately suggests itself, so he, as a man and a Christian, showed normal sympathy to that Church, which now in its own country was between the hammer and the anvil. At the same time, behind the words of the US State Department Special Representative, if you wish, you can see a hint of a potential split either of the Ukrainian Orthodox Church of the Moscow Patriarchate or of Ukraine itself, which will force the parishes and communities of the UOC-MP to be determined with whom they go into the future.

The second. Professor Casey flew to Ukraine on the days when the Patriarchal Council of the UGCC was held there, and after it - the Synod of the Episcopate, which will last until September 6. According to the secretary of the Synod, Bishop Bogdan Dzurah, the strategy of actions of the Ukrainian Uniates before 2020 will be discussed “in the light of new challenges”. According to the information department of the Ukrainian Greek Catholic Church, at the time of the opening of the Synod, 30 of August, its members "after the prayer took the oath of non-disclosure of information regarding individuals, as well as everything that could harm the Church." Another intrigue is that the delegation of the Kharkiv-Poltava diocese of the UAOC, led by Archbishop Igor Isichenko, broke away from the body of the Ukrainian Autocephalous Orthodox Church, Metropolitan Macarius, for the first time in the previous Synod of Greek-Catholics Patriarchal Cathedral. The difference between these two communities is that Archbishop Igor supports the process of uniting the “autocephalist” with the Uniates, and Metropolitan Macarius, who gave encouraging signals, at some point suddenly turned to 180 degrees.

All this affects the interests of the Patriarchate of Constantinople. As REGNUM reported earlier, in early August of this year, Patriarch Bartholomew in an interview with the German Catholic news agency KNA expressed concern about the situation in Ukraine. He said that he would soon meet with former presidents of Ukraine Leonid Kravchuk and Viktor Yushchenko. KNA recalled that in 2008, Yushchenko tried to get from Constantinople support for a plan to unite Orthodox and Greek Catholic Christians into an “independent Ukrainian Church,” but the patriarch “behaved with restraint.” In the current situation, he does not plan a visit to Ukraine, but would be pleased if the Orthodox and Greek Catholics considered him their spiritual father and indicated that the Patriarchate of Constantinople is their Mother Church and he would like to “be worthy of this trust” . And, really, at the end of August two former presidents of Ukraine arrived in Istanbul. The Ukrainian portal Religion in Ukraine reported that Yushchenko and Kravchuk informed the Patriarch of Constantinople about the events in the country, saying that they “see the canonical solution of the deep church schism in Ukraine in the mediation of the Mother Church and this will be an invaluable contribution in restoring the national integrity of the pious Ukrainian people. " So far there are no clear grounds for believing that American diplomacy is taking part in this “church operation” in relation to Ukrainian Christianity. However, apparently, Professor Sean Casey did not accidentally choose the end of August as the date of his visit to Kiev. Religious issues in our time are becoming difficult to separate from political ones, so it is important for American diplomacy to keep abreast, especially in this important region.

Ctrl Enter
Noticed oshЫbku Highlight text and press. Ctrl + Enter
We are
Religious conflict in Abkhazia? It is possible
23 comments
Information
Dear reader, to leave comments on the publication, you must to register.