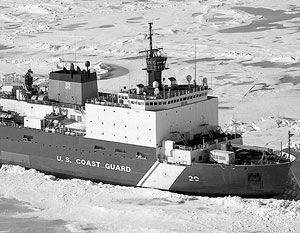 The US is increasingly worried about lagging behind Russia in the development of the Arctic. This is not only about the military presence, but also about purely technical indicators, for example, the quantity and quality of the icebreaker fleet. Now even Barack Obama has taken care of this problem. Can the US make Russia real competition in the Arctic race?


The US government was going to buy a heavy icebreaker only by 2020, but now it will be purchased two years earlier - by 2018. In addition, new plans are expected to increase the icebreaking fleet. The White House said that this step is necessary for security in the changing Arctic - “to keep pace with Russia.”

The rivalry over the Arctic territories with their natural resources and new trade routes is increasingly called the new stage of the geopolitical struggle, comparing with the cold war. The American Center for Strategic and International Studies has even released a report on Russia's actions in the Arctic, with the symbolic name New Ice Curtain. At the same time, the United States in this race has already lost to Russia, writes The New York Times, expressing the opinion of American officials and analysts.

The situation with icebreakers in Alaska is really sad. Once the USA had seven icebreakers, however now the fleet has been reduced to three, and only one icebreaker is heavy. The existing Alaska Coast Guard fleet, including two icebreakers, is aging. The coast guard is simply not enough ships to simultaneously monitor the active shipping through the Bering Strait and control fishing in the region. The United States does not have arctic deep-water ports, communication at high latitudes is undeveloped. This is a consequence of the fact that the US has not invested in the development of the Arctic region for years, indicates the NYT.

Russia also has a serious icebreaking fleet of 40 ships and is actively designing or building more 11 icebreakers. Russia is the leader in the construction of nuclear-powered icebreakers, in contrast to the United States, which are forced to buy ships and are clearly lagging behind with fleet renewal. The Russian fleet of nuclear icebreakers in the ranks. Now it consists of six atomic icebreakers, one container ship and four technological service ships.

Russia, unlike the United States, was concerned in time about the appearance of new icebreakers to replace the outdated ones. For example, at the Baltiysky Zavod in St. Petersburg, the Arktika lead ship was already assembled on 60%, this year they began to build the first nuclear-powered nuclear ship, Siberia, and later begin to assemble the third atomic icebreaker.

Picture of a project of a promising Russian nuclear icebreaker, which is supposed to be commissioned in 2017 year. He will be next in the long line of legendary Russian nuclear icebreakers
As a result, by 2020, Russia will receive three nuclear-powered icebreakers of a new generation with 60 MW capacity: the first in the 2017 year, the second and the third in the 2019 and 2020 years. Their peculiarity is the ability to walk both in the Arctic waters and in the mouths of polar rivers.

Moreover, Russia is developing a project for a new atomic super-icebreaker, which will be able to break the ice more than four meters thick. Plus, the development of the draft of a small-sitting icebreaker, necessary for escorting vessels that export fuel from the Yamal LNG project. Also plans to build about ten diesel-powered icebreakers on the 20 MW.

Russia wins the battle of the United States in the Arctic also by economic indicators. Russia is initially in a more advantageous geographical position, as it has direct access to the Arctic shelf, which makes it easy to move any cargo, equipment and materials. On the American continent, Canada basically borders with the Arctic, Tamara Kasyanova of the audit company 2K points out.

Russia has a much more developed infrastructure in the Arctic compared to the United States. Since Soviet times, it still has coastal ports throughout the entire Arctic Ocean. The plans of their modernization. At the same time, Russia is developing a new coastal infrastructure along the Northern Sea Route. A new port, Sabetta, has already appeared; plans are to build the Indiga sea port on the coast of the Barents Sea.

Russia is also building search and rescue stations in the Arctic region and has begun to organize the full navigation and cartographic support for the Northern Sea Route. She continues to work on the creation of a network of Arctic monitoring and correcting stations GLONASS / GPS, begun in 2000's.

Russia has an ice-resistant Prirazlomnaya oil platform in the Pechora Sea. “In essence, today Russia extracts hydrocarbons from the Arctic shelf, on which the Prirazlomnoye field is located. Whereas the extraction of hydrocarbons in the Arctic is so fraught with difficulties that there will hardly be any people in the victorious capital who donate their wealth to start developing oil and gas in the northern region, ”said Kasyanova. Especially considering the cheap oil, which kills the investment attractiveness of projects for the extraction of fuel in hard-to-reach places. It is clear that cost-effective projects determine the availability of finance for the development of a particular region, in this case the Arctic.

The US lagging behind Russia in the Arctic is not only economic, but also military. The Pentagon generally wanted to reduce its military presence in the region. In particular, the US Army spoke about the possible reduction of two brigades in Alaska, and the US Navy generally admitted that it had little experience in operations in the Arctic.

At this time, Russia is actively increasing its military presence, restoring even the Soviet Arctic bases. Actually, the entire infrastructure and work within the framework of the development of the Northern Sea Route will work in the interests of Russia's military presence in the region. Moreover, a separate section is devoted to the interests of the Ministry of Defense in a government-approved development project for the Northern Sea Route.

The balance of forces and interests in the struggle for the Arctic
Finally, the Russian army has much more experience in operations in the Arctic. Literally at the end of August, the first exercises of the Northern Fleet and Airborne Forces on the defense of an important industrial facility began in the Arctic. Army Helicopters on Tuesday aviation conducted exercises to search for and destroy saboteurs in the Arctic. They worked out a missile strike and a tactical airborne landing on the Taimyr Peninsula.
Alaska Governor Bill Walker complained at a meeting with the President on Tuesday about a reduction in the US military potential in the Arctic, bearing in mind Russia's capabilities. Between Alaska and Russia "from earth to earth" just a little more than 4 km, recalled Walker. “Now,” he argued, “the biggest increase is happening in the Russian Armed Forces since the Cold War. They reopen 10 (military) bases and build four more, and all of them (are) in the Arctic. So here, in the middle of the North Atlantic, we feel a little uncomfortable because of the reduction in our military capabilities. ”

Finally, Russia submitted an application for expanding the borders of the Arctic shelf in accordance with the UN Convention on the Law of the Sea, while the United States did not even ratify this convention. "The United States has not even entered this game," said Adm. Robert Repp, the retired Admiral, who previously commanded the US Coast Guard, now the special representative of the State Department for cooperation in the Arctic, told The New York Times.

“We are not the first day to shout that the country does not have the capacity to maintain any significant presence in the Arctic,” admiral Paul Zakanft, commander of the coast guard, said.

“I would like the US to do something of what Russia is doing - new bases, telecommunications, search and rescue capabilities,” says Papp. During the Cold War, when the USSR launched a satellite into space, the United States did not sit idly by saying “well done, Mother Russia,” he adds.

The Arctic is expensive for the States

The problem is that the real strengthening of the US position in the Arctic region today will not give them anything in financial and economic terms. Whereas the further development of infrastructure in the Arctic gives Russia a real economic benefit right now and a reserve for the future thanks to the growth in freight traffic on the Northern Sea Route.

For the United States, investments in strengthening positions in the Arctic region are economically unprofitable, but in order to at least catch up with Russia, Washington will need to find much more money than Moscow. At the same time, Russia's plans for the development program of the Northern Sea Route are estimated by experts at trillions of rubles.

In general, Russia, unlike the United States, has extensive experience in extreme climatic conditions, which gives it a big head start for the development of any projects in the Arctic region, Kasyanova is sure.

“In the current state, the United States will need many years to break even its icebreaking fleet. Especially when you consider that the war in the Middle East against the “Islamic State” requires significant funds today, ”says Kasyanova. "The desire to be a global policeman will cost the United States dearly, because they will have to choose between spending on maintaining world order, developing and strengthening their economy and society, or projects in extreme climatic conditions, such as hydrocarbon production in the Arctic," she concludes.

If Obama declares a program for the development of the Arctic region, this will only confirm the geopolitical confrontation with Russia for the right to become the first and only "owners" of the northern part of the planet.

We are in Yandex Zen
Hybrid threats have arisen in the Arctic
Interview with Viktor Boyarsky: "Icebreaker is an exhibit in itself"
32 comments
Information
Dear reader, to leave comments on the publication, you must to register.