8 September 2015
46
In the series of materials devoted to the issue of urban self-defense, we could not overlook the MPL (small infantry shovel), better known as the "shovel shovel." Along with the “vest”, the MPL has become a true symbol of the Soviet (and then Russian) soldier. How and why did this happen? Where did the infantry shovel first appear? When and how it began to be used in melee? How can it be used in self defense?
Answers to these and other questions were generously shared by an expert and amateur MPL Vadim Shutykov - a passionate collector of blades, the author of the self-instruction book on hand-to-hand fighting "Small Infantry Shovel," an instructor who conducts seminars and training on how to handle this seemingly harmless, but deadly dangerous object.

When and how did the MPL appear?

A small infantry shovel was invented by Danish officer Mads Johan Buch Linnemann (1830-1889). He received his higher military education 26 in October 1849, and in 1864 he participated in the war on the Als (Danish-Prussian war) as a company commander.
At the front, he invented a multifunctional shovel. It could be used as a frying pan, knife, and, of course, as a entrenching tool. Linnemann was introduced to the captain in 1867, and his invention was patented in 1869, and the shovel, greatly simplified, was introduced into the weapons of the Danish army in 1870 year. But only 256 trenches were produced for the battalion, i.e. only every third person received a shovel.
In 1871, Linnemann traveled to Vienna, where he began to produce an Austrian version of the spade. For the Russian Imperial Army 60 000 units were ordered for 30 000 rubles. 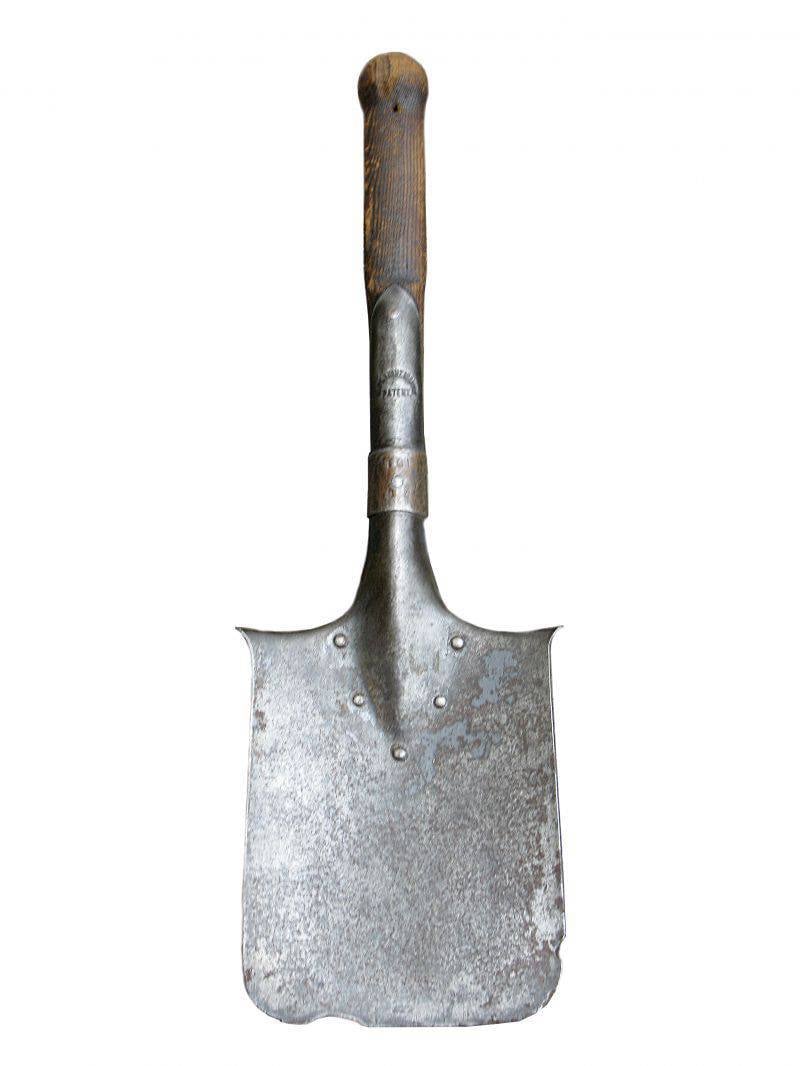 In which army did they first consciously use it for hand-to-hand combat?

Back in the Russian-Turkish wars, Russian soldiers used the entrenching tool for hand-to-hand combat. It became more widespread in the First World War.
One of the first references in the literature of the small infantry shovel as weapons, can be found in the famous novel by E.M. Remarque. “On the Western Front Without Change”:
“... Now a new fashion has begun to go on the attack: some take only hand grenades and a shovel with them. A sharpened shovel is a lighter and more versatile weapon, it can not only be poked from below, under the chin, it can be chopped off first and foremost with it. The blow is more weighty, especially if applied to the side, at an angle between the shoulder and neck; then you can easily dissect a person to the very chest ". 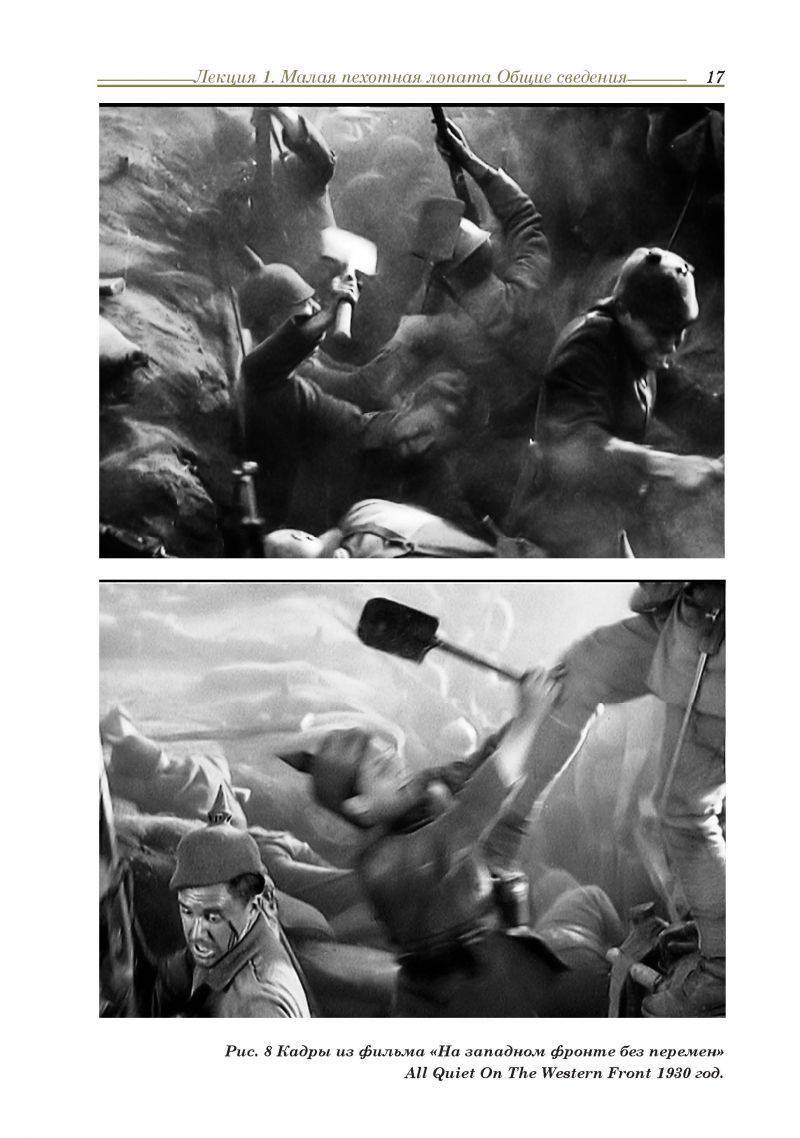 The experience of the front-line soldiers of the First World War was taken into account by the warlords of the Workers 'and Peasants' Red Army. Corresponding programs were developed, and the Red Army army instructors began to train new recruits in hand-to-hand combat not only with a rifle with a bayonet, but also with the use of a tailing tool. This was reflected in various instructions for the Red Army, and in publications in popular science literature. 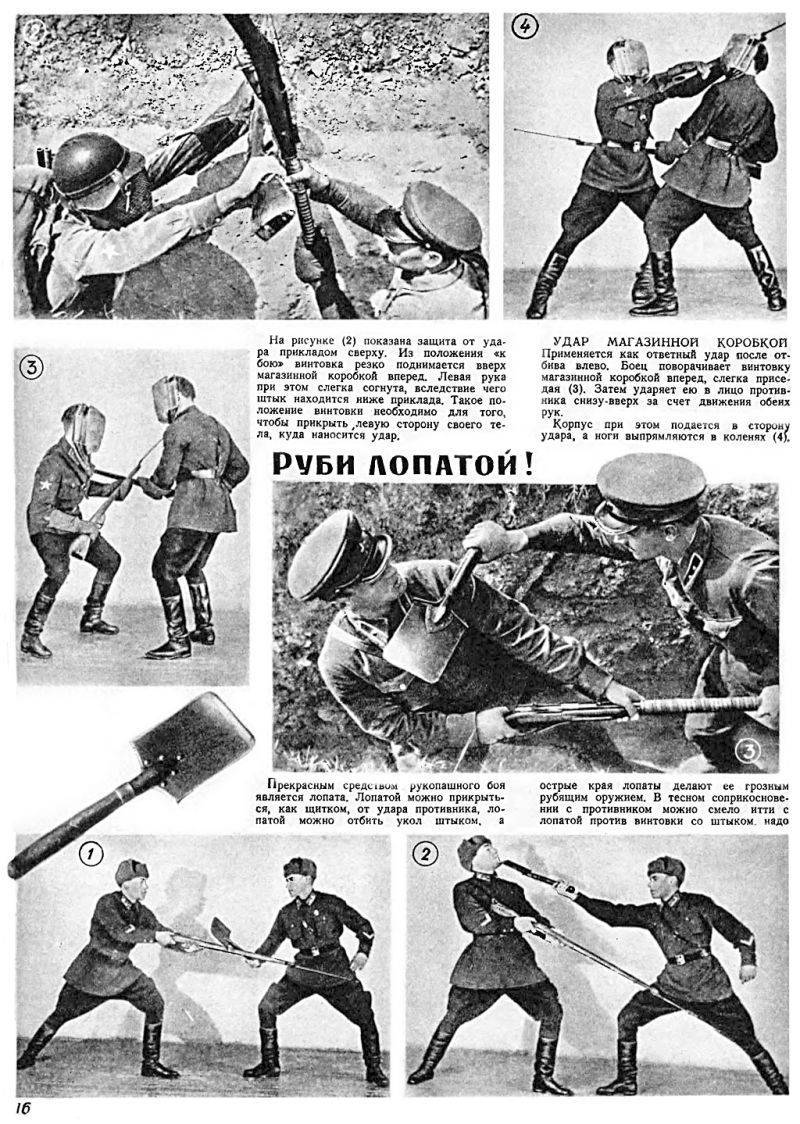 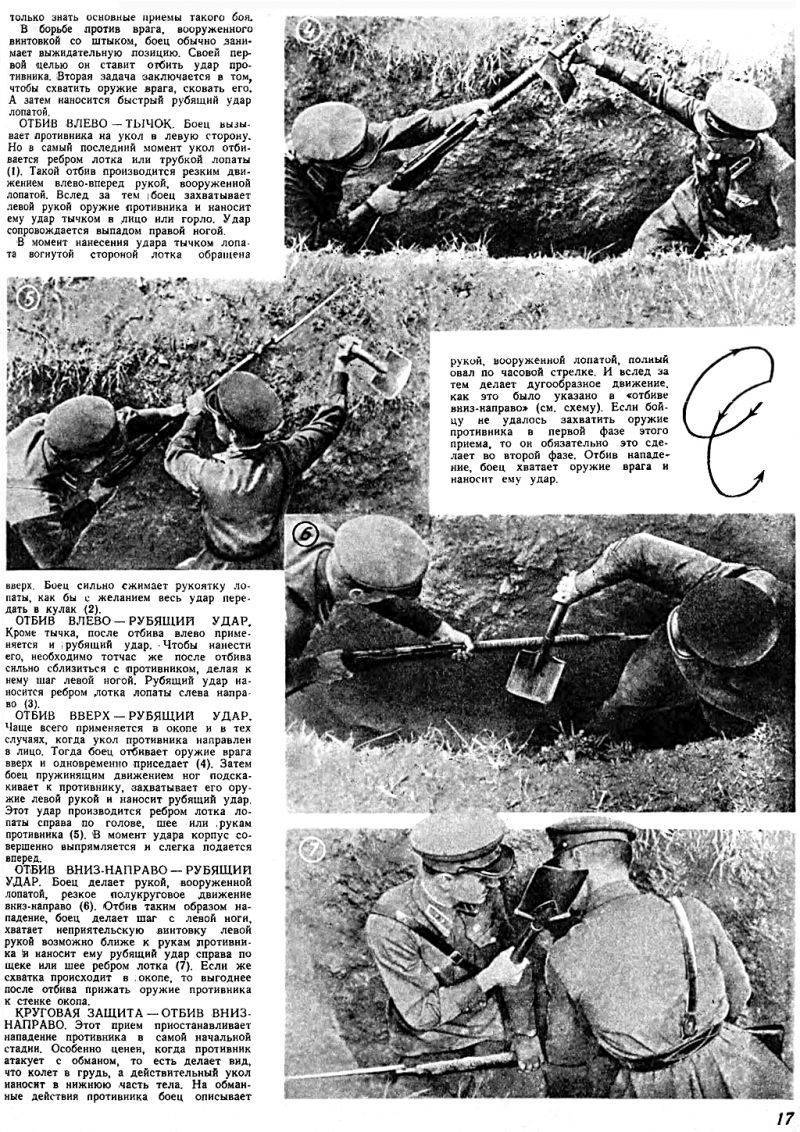 Did the shoulder have competitors?

During World War I, along with a small infantry shovel, all sorts of trench knives, clubs, brass knuckles, from home-made copies to weapons that were manufactured industrially were used for hand-to-hand combat. 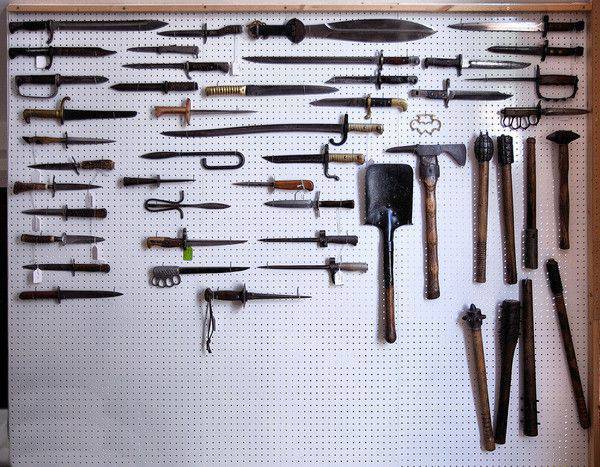 Cudgel is easier to use in battle than a scapula. The blade needs to be clearly oriented with the edge of the tray to the point of attack, and if the enemy is wearing a protective shell and helmet, it requires dexterity and skill to hit the unprotected part of the body. The club takes its mass. This explains the huge range of all kinds of clubs in the First World War.

However, it is necessary to note a very important nuance. The shovel is a regular weapon of a soldier, it is always at hand and multifunctional. The range of its application from the digging of the earth and the griddle, to the paddle and the squat, as well as this is a very good help in the melee.

Cudgel is purely utilitarian. Of course, in a positional war, when the front stood in place for months, a heavy club could be stored in a dugout, using from time to time. But in World War II, when the troops were transferred over considerable distances, no one agreed to carry extra weight on them. Therefore, the shoulder blade on the soldier's belt won in “natural selection”.

Is there a Russian (Soviet) school of combat with a sapper shovel, or do all the armies of the world use the same principles? If so, what are its differences?

All schools of the battle with a shovel are about the same. They come from the natural logic of using a shovel in the melee on the battlefield. If we look at any instruction on hand-to-hand combat of the military period (USSR, Germany, England, etc.), we will see universal racks, and an approximately identical set of the simplest, but effective techniques and movements. These techniques were selected by life itself on the fronts of the two great world wars.

However, in modern schools of unarmed combat, we can see some differences.

For example, in 80, instructors of the Airborne Forces of the German Democratic Republic (GDR) used karate techniques to work with a spatula. 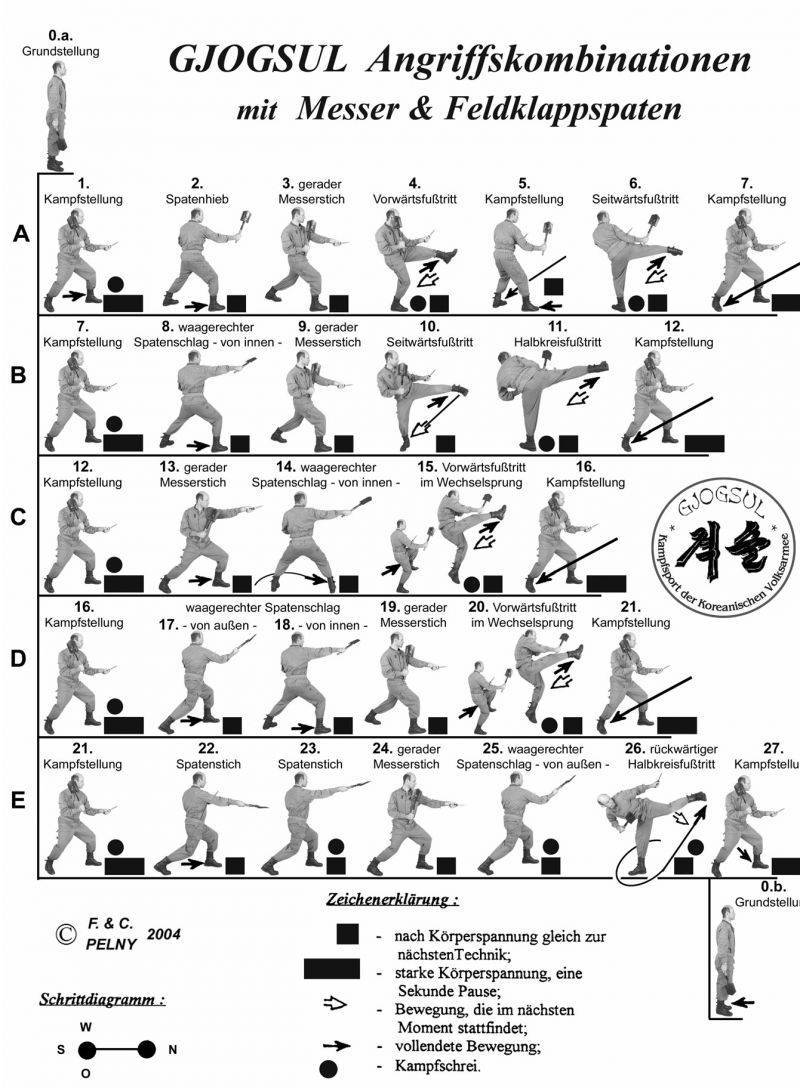 If we talk about NATO countries, then at present a three-section small folding blade with a wide triangular handle is used there. In connection with the design feature when using a shoulder blade in hand-to-hand combat, a soldier must hold it with two hands. In consequence of this, the fighting stance becomes frontal. Accordingly, the coordination of the movement of the soldier worsens. So they are trained to keep the trowel of the US Marine Corps.

The Russian school of hand-to-hand combat is the heiress of the magnificent school of the USSR, and in my opinion, is the most optimal.
The basis of this school is a whole fusion of combat areas: fencing with bayonets, saber fencing, SAMBO, and boxing.

I think that we will not find a photo of melee combat in any archive of any country. We can find a photo before the melee, or after it.

Imagine: there is a hand-to-hand fight for life and death. Screams, shouts, groans, people are pierced with bayonets, chopped with shoulder blades, and amid all this horror, a photographer runs with a "watering can" and takes pictures. Rate his chances of getting out of this landfill. I think they are zero. This explains the lack of real, not staged photos with melee fights.
But we still can get an idea of ​​hand-to-hand combat with a spatula. Here world cinema will help us. In my video "A brief historical review of a small infantry shovel" (see the beginning) from 06 and 20 with 6 and 42 with an excerpt from the film "On the Western Front, without Change." the crucible of the Great War. In my opinion, twenty-two seconds from this film perfectly illustrate what a hand-to-hand fight with a small shovel is. Of course, the actors beat their shoulder blades flat to not injure their colleagues, but this passage certainly conveys some impression.

What are the options for using MPL in combination with other weapons? 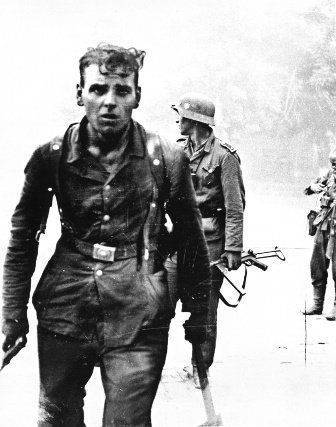 There are not many variants of such combinations, but they exist. The most common combination is a pistol and shovel, or a knife and shovel. Remarque described hand grenades and a shovel.
Such combinations are set by functional necessity. For example, assault units first threw sections of trenches in a certain sequence with hand grenades, and then broke into the trenches and finished off all life. If it was required to clear the dugout, then at first they threw a grenade, and then they fought with a pistol in one and with a knife or shovel in the second hand.

Here is an excerpt from the book of Paul Karel "The Eastern Front", the first book "Hitler goes to the East":

“The attackers cleared each meter of the path with their shovels. At the same time, an enemy could appear on the right, on the left, in front or behind. The situation forced Luttwitz to develop an original method of warfare. Here is how Schaub describes it: “The head company made its way through deep snow on both sides of the road to the nearest village and, acting as an assault unit, attacked the enemy with narrow, deep orders. - entrenching tool.

The paddle is combined with any object that can be used as a weapon. There is also a combat technique with two shovels at the same time. At the seminars, I show the work of a scapula with a canvas cover, or a spatula and a knife, as well as a stick, jacket, etc.

Why in Russia MPL has become a kind of symbol of a soldier?

Remember the ordinary poster of the USSR “Spade is a friend of a soldier”? So, she is really a friend. 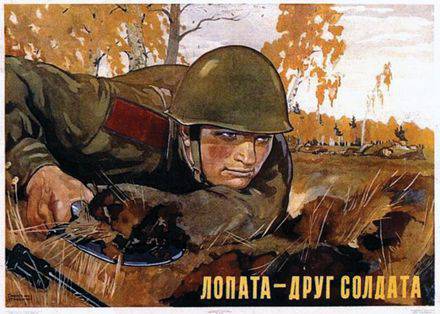 Here, for example, the memory of the veteran A.D. Volkova:

“But the sapper blade deserves special attention! What is just not praised in poems, songs, movies of military themes: tobacco, glass, mail, etc. It is immediately evident that these singers did not even smell the front powder. The most praiseworthy is the shovel! A soldier can throw a pot, a spoon, even a rifle, the bayonet from which he threw away a long time ago, but with a spatula only death will separate him. The shovel saves the soldiers not only in the melee. After all, this is an ax, a knife, a frying pan and other innumerable applications ... We must pay tribute: most blades are made of good steel. Only those made in a hurry are not sharpened at the factory one of the edges of the shovel. But the soldier still sharpens himself. And then it sharpens it so that the scapula not only cuts, but cuts well, and some even shave with it! But it is necessary to fry on it carefully! Do not let her let go of hardening. Horse meat has to be cooked for a very long time, but you can fry on a shovel quickly. After all, rarely comes across telegraph wire to grill barbecue on it. It would be possible on the bayonet, but he was thrown out: an extra weight ... You can talk a lot about the shoulder blade. She would need to put a monument.

The remaining memories of the front-line soldiers on the small infantry blade can be read here: http://zhab.livejournal.com/208006.html

It must be said that the shoulder blade was one of the symbols of the First World War. I want to show a spatula from my collection, where a commemorative engraving was made in memory of the 1914 war of the year. "In memory of our heroes who died in the trenches" 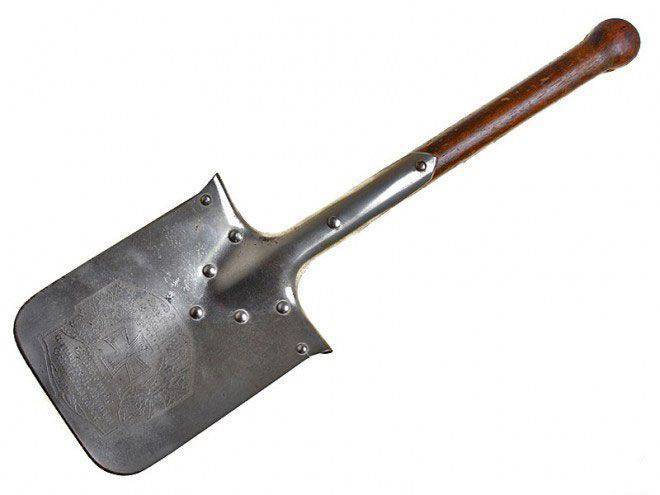 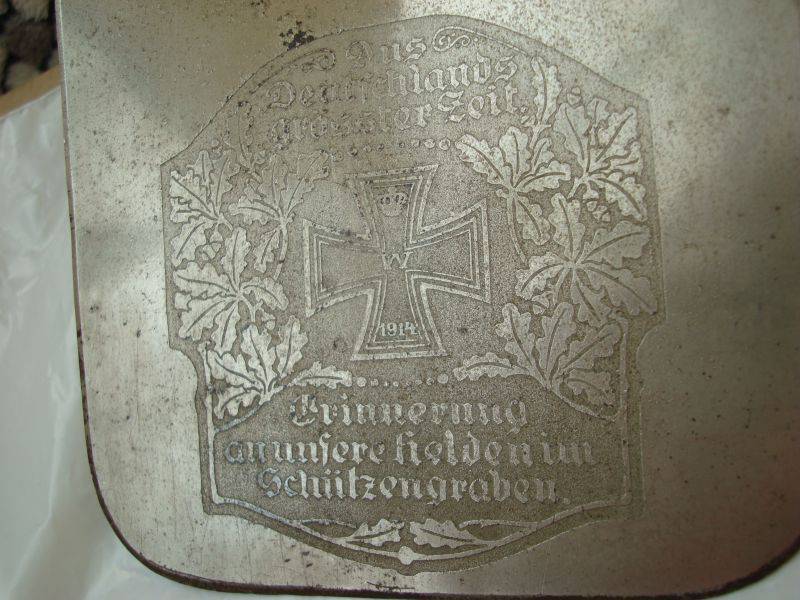 Any infantryman of any army knows that this simple tool is really a friend who will save his life during the shelling. So the shovel is really a symbol of a soldier of the same importance as a machine gun or rifle.

Ending in the second part 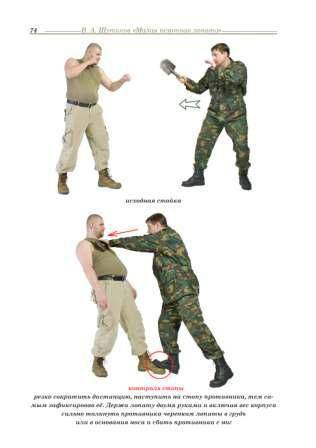 Ctrl Enter
Noticed oshЫbku Highlight text and press. Ctrl + Enter
We are
Stick for city self-defenseSapper shovel for urban self-defense (part 2)
46 comments
Information
Dear reader, to leave comments on the publication, you must to register.